Share Article
The S-Max leaves you shaken, not stirred
Pros
Good-looking
Seven seats
A hoot to drive
Cons
Sports suspension is too hard
Seats appear to be made of wood
Your kids' heads will fall off
Cars > Ford > S-Max 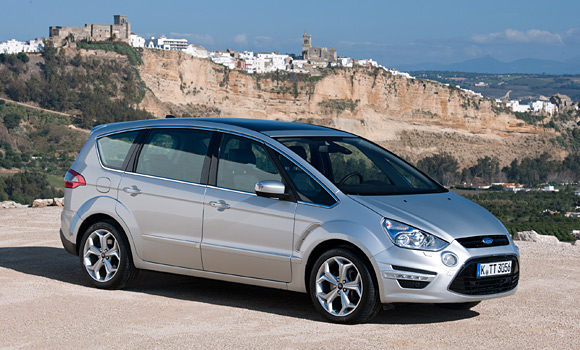 DO YOU know what makes Britain so pretty in the summertime? It isn’t the terrain, which for the most part is a bit boring. And nor is it the towns, which are usually ringed with a wall of pebble dash and scum.

No. It’s this. Britain is the only country in the world that is in colour. Any further north on the globe and it’s all rock and lichen; greens and greys with a sprinkling of volcanic ash. It can be very striking — Iceland is by far the most dramatic country I’ve ever seen — but it’s all in black and white.

Search for and buy a Ford S-Max on driving.co.uk

Venture further south, where the summers are long, and for sure you get a brief spasm of brightness. But then, as the sun gets to work with its sizzling spears, everything turns brown. Southern Spain? In August, it’s like living in a sepia print. Here, though, from the beginning of May to the end of October, it’s more bright and more vivid than a children’s playpen. Right now, my garden is a mass of blues and greens and purples and reds. It’s as though Turner had designed it after dropping some acid. And it’s all set to a backdrop of yellow rape and a sky of such intense blueness, it makes Paul Newman’s eyes look like a frog’s back.

I’m glad that Britain is the colour of a bucket of Smarties because when it comes to the roads, things are very different. Elsewhere in the world, people choose cars that are yellow and pink and turquoise. Here, our roads snake through the playpen like a remorselessly dull river of grey. My family is the worst offender. We have a grey Volvo, a grey Ford and a grey Aston Martin. I thought I was being adventurous when I bought a black Mercedes but I wasn’t. Black’s just dark grey, really.

I suspect the main reason we do this is because we don’t like to stand out. We would no more go to work in an egg-yellow car than we would go to work in an egg-yellow suit. But there are other reasons, too. For example: we may want a car the colour of Sarah Ferguson’s pubic triangle but we fear that when the time comes to sell, it’ll be worthless.

There’s a bigger reason, though. Today you can have any colour you like, so long as it’s grey. Many car makers now operate “car configurators” on their websites. These are a marvellous way of looking busy at work while doing the square root of nothing at all. You simply choose what model you’d like and it pops onto the screen. Then you choose a colour and it becomes that colour. Then you choose the wheels you’d like, and the seats and the carpets, and with each click, the picture changes. Fantastic.

Well, maybe not that fantastic. But it beats doing any actual work. However, while I was building my own Jaguar XKR the other day — I still want one — I became a bit stuck on what sort of colour I’d like. There’s a choice of 13 — which is about 2m fewer than Dulux offers — and apart from a nasty red and a dreary blue all the others are grey. Oh, there’s a greeny grey and a bluey grey and a blacky grey. But greyness is definitely the central theme. Want a Mercedes S-class? Then you have a choice of 12 colours. Plum. Excrement. Henry VIII’s hat. Or grey. BMW? Don’t know. Its car configurator would only work, it said, if I was in Java. And I was in Chipping Norton.

So let’s move on to the Audi A6. Here, there’s a choice of condor grey, quartz grey, oyster grey, black (which is grey) and white. Which will be grey very soon. Lexus is crafty, choosing to describe its colours as Arctic, pearl, velvet, Palladio and so on. But don’t be fooled. Whatever box you tick, you end up with a car that’s pure John Major, only without the spectacles. Even Land Rover has jumped on the blandwagon and deleted the beautiful shade of green on my old car for a new and exciting range of greys. That is as ridiculous as Ferrari dropping red.

Onwards, though, to the Ford S-Max, which arrived at my house last week. It was grey, which on the face of it is entirely predictable because, behind the LED running lights and the gills and the tinted windows, this is a mini-MPV. And mini-MPVs are the dreariest, greyest, most dismal forms of transport yet devised by humankind. Whenever I see a man in a mini-MPV, he is always a dork; a sad and tragic little weasel for whom life is a chore to be undertaken as quietly and as practically as possible. And women in mini-MPVs? For some reason, they have thin lips and are always very bossy. The trouble with the mini-MPV is that it costs more than a conventional hatchback but all you get in return for your money is more headroom. What’s the point of that? Unless you have a gigantic Afro, which you don’t because you have an MPV. You have a side parting, and you don’t need a yard of air above your head for one of those.

The S-Max is different, though. Unlike most of its competitors, it has seven seats. And it is very good-looking. These are the main reasons I recommended the old model to Nicola Formby, aka AA Gill’s blonde. And since she hasn’t put a burning tyre round my neck since, I figure she’s quite happy with it. This would be an ideal car for people who need seven seats but can’t face the dullness of an ordinary MPV In some ways the new model is even better. Certainly, it’s better-looking, and if you go for the petrol engine, more economical than before as well.

Other things? Well my test car had a full-length glass roof, a simply outstanding stereo/sat nav system and a sporty starter button. Best of all, though, it was a genuinely nice place to sit. There are some properly thought-out styling touches, none of which comes across as silly. Better still, it is a hoot to drive. With the new 2-litre turbo engine, it goes like a scalded cock and corners like a hunted fox.

And this brings me on to the inevitable problem. Because it has a starter button like a Sixties racer, and because it looks so sporty and because you can now specify it with a sporty double-clutch gearbox, Ford has got it into its head that it’s a sports car. So it has given the Titanium X spec car I drove sports car suspension. Couple this to Ford’s obsession with seats that appear to be made from wood and I’ll tell you something for nothing. If your children do manage to fall asleep in the back, their heads will be shaken off. It’s a shame. Because this would be an ideal car for people who need seven seats but can’t face the dullness of an ordinary MPV and don’t want to drive around in a massive, thirsty and expensive off-roader.

It’s reasonably good value, it’s good looking and it’s good to drive but these things aren’t quite enough for you to forget the elephant in the room. Which will come in the shape of several decapitated children.

Search for and buy a Ford S-Max on driving.co.uk