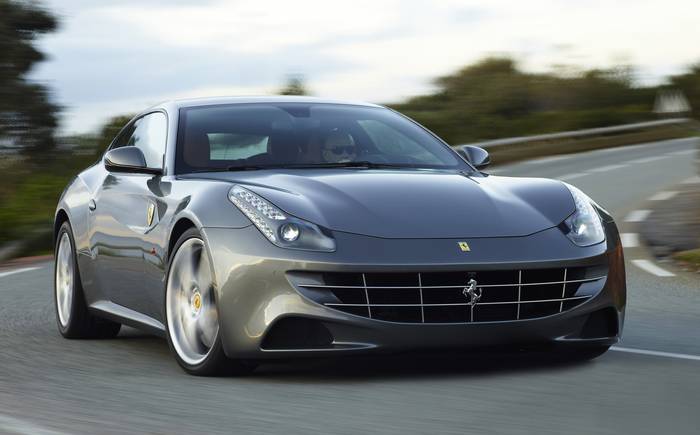 It was a normal Saturday morning and the roads were jammed with DIY enthusiasts on family trips to the local hardware store. This sort of scene is bad news if you’re in a hurry, because the sort of person who erects shelves himself is not going to drive to the shop at more than 4mph and waste the money he’s saved.

Saturday morning is now, for me, the worst time on the roads. They’re a cocktail of the mean, the elderly and the frightened. Nobody’s quite sure where they’re going, and no one can concentrate because the kids in the back are explaining sulkily that they’d rather shoot space aliens than traipse around B&amp;Q looking for self-tapping screws.

Search for and buy a Ferrari FF on driving.co.uk

Happily, however, my jaunt to the Midlands last weekend wasn’t so bad because I was driving the new Ferrari FF. And all you do when a Hyundai or a Peugeot gets in the way is pull the left-hand gearshifter paddle a couple of times and press the accelerator down — suddenly it isn’t in your way any more. In the FF you could easily overtake an Australian road train before you’d got out of your own drive.

The engine is a 6.3-litre direct injection V12 that develops a stratospheric 651 horsepowers and 504&nbsp;torques. And what that means is a car that gets from zero to 62mph in 3.7&nbsp;seconds and then onwards, propelled seemingly by its own seismic shockwave, to a dizzying 208mph.

Of course, there are other cars that can go this quickly, but none of them feels like a Ferrari. The paddles, for instance: when you pull them, they feel as if they aren’t actually connected to anything, which in reality, of course, is a fact. They aren’t. They work the gearbox in the same way as the light switch in your kitchen works the bulb. Only a little bit faster.

Then there’s the steering. As is the way in all modern Ferraris, it is disconcertingly light. Turning the wheel requires as much effort as dusting a polished work surface. So you imagine that there can’t possibly be any feel. But there is. You know all the time exactly what those front wheels are doing, how much grip is left and what you should be doing with the throttle as a result.

Ferraris these days are like Vietnamese masseuses. Soft. But acupuncture accurate. And they handle — there’s no other word — beautifully. They are like other cars in the same way as a Mac is like a PC. In other words, they are not like other cars at all. And just as a Mac has no right-click — which drives me insane — Ferraris have irritations, too. All of the controls are on the steering wheel. Indicators, lights, wipers, the horn, the starter button, radio tuning, volume, gearshifting and the traction control switch. The lot.

The idea is that you never have to take your hands from where they should be, and in a meeting that makes sense. It makes sense in a grand prix, too, but on the Fosse Way what it means is that you indicate left when you want to go right because the wheel is upside down at the time you hit the button. And you turn the wipers on to say hello to friends going the other way. It’s all a bit bonkers but it does add to the sense of occasion, as do the leather and the sense of space and the howl from the engine. A modern-day Ferrari feels very, very special.

However, even though the new FF feels this way, it is not like any Ferrari I’ve driven before. Chiefly because it’s the first Fezza to be fitted with four-wheel drive. There’s a conventional way of doing this. You take drive from the engine to a centrally mounted transfer box, which then distributes power to front and rear axles. Naturally, Ferrari decided not to do this. It says that if you send the power down shafts below the engine to the front axle, the engine must sit up high, which is bad for the handling and bad for the styling, too. So, instead, the FF sends its power to a rear-mounted gearbox and then to the rear wheels. But then, if sensors detect that those wheels do not have enough grip, two small two-speed gearboxes being driven by the crankshaft at the front of the engine are engaged and the front wheels are asked to join the party.

It’s an idea that was first tried by Ferrari in the Eighties, but back then the electronics necessary simply weren’t available. I’m surprised they’re available now. It sounds an almost fantastically complicated solution, and I wonder if it really will work. I drove the FF pretty hard and at no time did I sense the front wheels were being driven. And even if they were, they are never allowed to take more than 30% of the engine’s power. And none at all if you go past 130mph. At this sort of speed the front-mounted two-speed gearboxes can’t cope and shut down. The words Heath and Robinson keep springing to mind here. Followed by a simple question. Has anyone at Ferrari ever driven a Nissan GT-R?

Ferrari says that the system will be of enormous benefit to those who wish to take their Ferrari skiing. And that may be so. But, as the owner of any Bentley Continental or even Range Rover will testify, you can drive as many wheels as you like; if you don’t fit snow tyres your journey will end in Moûtiers. Of course, you may be wondering where on earth you would put your skiing clobber in a Ferrari. Aha. Well, not only is this the company’s first four-wheel-drive car, it’s also its first hatchback. It has fold-down rear seats, and you can fit more in the boot when they are up than you can in a Renault Scénic. So, a very special, very fast car, with a dollop of practicality and a four-wheel-drive system that may not add much. But it doesn’t take anything away, either.

However, there are a couple of problems. First of all, the FF is as big as a medium-sized US state. On a normal British B-road you really do flinch when you pass traffic going the other way, and in a town it’s next to useless. But worse than that is the styling. It looks fantastic from the front and wonderful, too, from the side, but I’m afraid its backside is hopeless. Bland. Dreary. Kia does a better job. You may think you could live with this but I guarantee that when the time came to sell, you’d struggle to find a like-minded soul. As a result, I expect the FF to drop in value like a hammer falling from a tower block. Be aware of that before you run amok with the comically expensive and lengthy options list. For instance, don’t have the boot lined with leather (£1,728) if you really are going to take your FF to St Moritz.

Overall, I liked this car. It was exciting when I was in the mood, but strangely docile and comfortable when I wasn’t. I like the way it feels different from everything else on the road, and I’m not bothered about the four-wheel-drive system either way. But that rear end? They really should have had a look at Pippa Middleton before they made merry with the ballpoints.

Search for and buy a Ferrari FF on driving.co.uk