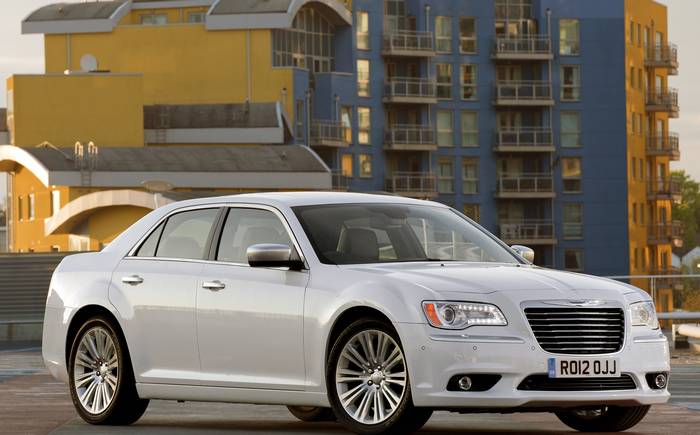 Some people can go into any clothes shop and buy any item from any shelf, knowing that when they put it on, they will look good. I am not one of those people. I’ve never even been able to find a pair of socks that don’t look ridiculous once I’ve put my feet into them.

It’s the same story with hats. Partly because my head is the same size as a Hallowe’en pumpkin, and partly because my hair looks as though it could be used to descale a ship’s boiler, it doesn’t matter what titfer I select, it ends up looking like an atom on an ocean of seaweed.

Search for and buy a Chrysler 300C on driving.co.uk

Trousers, though, are the worst. Because my stomach is similar in size, colour and texture to the moon, it’s difficult to know whether strides should be worn above or below the waist. Both ways look stupid.

This is why I have cultivated my own look over the years. It’s the look of a man who has simply got dressed in whatever happened to be lying by the end of the bed that morning. I pull it off very well. Mainly because that’s what I actually do.

I’m not alone, of course. Many people obviously struggle to find clothes that work, but, unlike me, they continue to make an effort. Pointlessly. That’s why you see fat girls in miniskirts, and men in Pringle jumpers, and Jon Snow’s socks.

We see the same problem with cars: people drive around in stuff that is really and truly wrong. Yesterday, for example, I saw a very small woman getting into an Audi RS5. And when I say small, I mean microscopic. It’s entirely possible that while her mum may have been diminutive, her dad was an amoeba. And she was getting into a super-fast Audi. A car that only really works if you look like the chisel-jawed centrepiece of a watch advert.

Let’s take Nicholas Soames as a case in point. He is a somewhat large — and larger than life — Conservative MP with very little time for . . . anyone, really. Can you see him in a Nissan Micra? Or even a Volkswagen Golf? No. It would be all wrong.

Can you see Stella McCartney in a Kia Rio or Mick Jagger in a van? James May drives around in a Ferrari, and I’m sorry, but that’s as hysterical as the notion of Prince Philip turning up to open a community centre in a Mazda MX-5. With Jay-Z on the stereo.

It’s strange, isn’t it? We all pretend that we pay attention to the cost of running a car and how much fuel it will consume. We tell friends that we made our choice on our particular needs and the needs of our family. But the truth is that we buy a car as we buy clothing. With scant regard for how it was made, or by whom, because we’re too busy looking in a mirror thinking, “Would this suit me?”

I, for example, like small sports cars. But I know that driving around in such a thing would be like driving around in a PVC catsuit. It would be absurd. I also like the BMW M3. As a car, it ticks every box that I can think of. But I could not have one because Beemers have not quite managed to shake off an image that is at odds with the one I’d like to portray.

Ever wondered why you see so few big Jaguar XJs on the road? Is there something wrong with them? Not that I know of. Except that, among the people old enough to be interested in such a car, the memory of Arthur Daley is still vivid. They don’t want a Jag for the same reason they don’t want a sheepskin coat.

And all of this brings me nicely to the door of the Chrysler 300C that is parked outside my house. And my neighbour’s house, too. And the one after that. Other places that it is parked include Hammersmith, Swindon, Bristol and the eastern bits of Cardiff. It is very big. More than 16½ft long and almost 6ft 3in wide, in fact.

Naturally, it is also extremely large on the inside, which would make it ideal for anyone with many children. A Catholic, for example. Or with children who are very fat. An American, perhaps.

And yet, despite its size, prices currently start at less than £30,000. About half what you’d be asked to pay for a similarly large and well-equipped Mercedes S-class.

A bargain, then? Well, yes, but every single thing you touch in a Mercedes feels as if it has been hewn from rock and assembled in such a way that it will last for a thousand years. Whereas everything you touch in the Chrysler feels like a bin bag full of discarded packaging.

It feels American. But actually it’s made in Canada, and on the Continent, thanks to a flip-chart-and-PowerPoint meeting somewhere, it’s sold as a Lancia Thema.

The old 300C handled terribly. And I’m here to report that the new one handles terribly as well. It responds to all inputs from the wheel with what feels like casual indifference. Imagine asking a French policeman in a rural town for help. Can you picture his uninterested face? His nonchalant shrug? Well, that’s how the big Chrysler responds when you ask it to go round a corner.

But there is an upside to this. Because it sits on tall, non-sporty tyres, it is extremely comfortable. And despite the diesel flowing through its arteries, it’s very quiet as well. And it is fitted as standard with every single thing you could dream of.

I can think of hundreds of people — probably thousands — who would love a car such as this. People who are not bothered about handling or driving along as though they are on fire. People who just want a quiet, comfortable, gadget-laden cruiser. At an amazingly low price.

But there is a problem that takes me right back to the gentlemen’s changing rooms. It’s a very showy car, very brash. And who would that suit?

I have seen several people in American gangster movies who could pull it off, but here in Britain? Hmmm. A rapper, perhaps, but in my experience most like a bit of Bentley & Gabbana. They like a brand name, and Chrysler’s a bit Poundland. Beyond rap-land . . . I can’t think of anyone.

It is, then, like the perfect pair of trousers. They are keenly priced and made ethically and well by adults in a clean factory with many fire escapes and wheelchair ramps. They are exactly what you need and they fit like a glove. Lovely. Except they are purple.

Search for and buy a Chrysler 300C on driving.co.uk