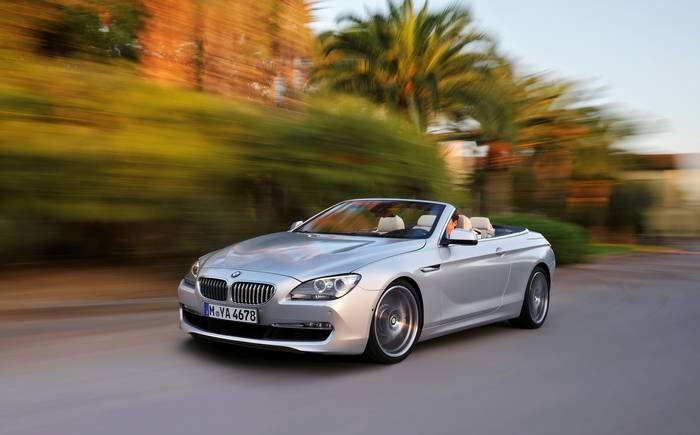 Have you actually stopped for a moment and looked — really looked — at the new BMW 5-series estate? All things considered, I would say that this is one of the most handsome cars ever made. It has all the BMW hallmarks: the body seems to have been stretched to the limits simply to cover the wheels, and there’s the traditional Hofmeister lean-forward kink in the rear pillar. It’s a tiny design detail that makes the car look as though it’s going a thousand miles an hour even when it’s in a golf club car park. And yet the car doesn’t look old-fashioned. There’s something about the shape of the bonnet that makes it looks as though it may be visiting us from the future.

It’s the same story on the inside. All cars of this type, if we’re honest, feel and look pretty much the same from behind the wheel. But not the Beemer. It’s all very minimalist and unusual. As if you’ve accidentally plonked yourself down in a Bang &amp; Olufsen catalogue. And the 5-series estate is not alone. The new(ish) Z4 moons me with its beauty when I see one go by, and then there’s the limited-edition 1-series M coupé. It’s not a coupé, actually; it’s a saloon. Actually, it’s not even that. It looks like the box in which your washing machine was delivered, only to make sure you don’t throw it away by mistake it has enormous wheelarches.

I love this car because what it says when you look at it is this: I am very fast and I don’t need to shout about it. It is very fast, too. Faster than a Cayman R. Faster than a Lotus Evora. Faster than you would believe possible. The 1-series M coupé is very probably my favourite car on the market right now. Or it may be the M3. I’m not sure. But it’s one of those two.

I can’t believe I just said those things. I’ve spent the past 10 years laughing at the man who styled BMWs and the idiots who drove them. BMWs? They were nothing more than expensive and very hideous mounting brackets for your stupid personalised plate. Mont Blanc pens with windscreen wipers. I was a Merc man. But Mercs these days are getting a bit too chintzy for my taste. And so are Jags. And the Lexus is still stuck at the back, in its hairy sports jacket, wanting to smoke its pipe.

So now I’ve switched my hero worship from United to City. I’ve become a Beemer man. I should say at this point that I don’t like all BMWs. The X1 is very terrible, and so is the genital wart that is the X3. Then you have the X6, which is idiotic, and the little 120 diesel, which seems to be a bit boring.

But the rest? Mmmm. That’s why I almost skipped with delight to the door of the car you see in the pictures this morning. It’s the new 640i convertible, and I was looking forward to driving it very much. We see some of the current BMW good and the bad in the styling. Roof down, it’s excellent, but when you press the button to put the roof up, it seems a slightly tipsy man comes and erects a tent with which he’s not completely familiar above your head. Why the vertical rear window? It looks stupid. There’s more silliness, too, in the name. There was a time when the numbers on the back told you the model and the engine size. So a 325 was a 3-series with a 2.5-litre engine, and a 750 was a 7-series with a 5-litre engine. Very sensible. Very German. But now the logic has gone, so the 640 I was testing was a 6-series with a turbocharged 3-litre engine. It’s a new powerplant that develops many horsepowers and big wads of torque. And it’s allied to an eight-speed gearbox that is fitted solely so the man who invented it can go to gearbox conventions and tell other gearbox enthusiasts that his box has more cogs than theirs. It shifts well enough, but eight speeds? In a car with this much torque? As the XJS proved all those years ago, three is all you need. And three would suit this car far more because it is the laziest machine I’ve driven since the old Rolls-Royce Silver Shadow. It is not built for point-and-squirt hammer-time trips to the racetrack.

Shock and awe? Lock and snore, more like. It even comes with a TV screen of such vastness, it’s unfair to call it a television. This is a home cinema. This, then, is built to move you and your family, provided the children are both amputees, around in the greatest possible comfort. It is a car designed for Houston dentists. A fatboy car. We should rejoice at the news. Too many expensive cars these days are ruined by low-profile tyres and ebony-hard suspension. Too many are honed on the Nürburgring. So, while they work on a track, where they will never be driven, they are bone-shakingly horrid on the road, where they will.

The BMW is soft. Squidgy. Comfy. The steering wheel is connected to the front wheels with a big soft bag full of melted chocolate, and the noise it makes at speed is the hum of a gardener who’s happy in his work. I’m sure that if you were really determined, it could be made to whiz about at 155mph in a fog of tyre smoke. But that would be like trying to make a teenager tidy its room. Possible — but, ultimately, too much effort is required.

You don’t drive the 640. You waft along. It’s one of those cars that’s extremely happy to plod up the motorway at 65mph, unless you aren’t concentrating, in which case it will slot some Barry White into the CD player and drop down to about 3mph. At the lights, the engine is so lazy that when you come to a halt it can’t even be bothered to keep going and falls asleep. The idea is that when you take your foot from the brake pedal it wakes up. And that sounds very green and polar-bear-friendly. But you wait till you’re trying to pull onto a fast and busy main road. It can be a bit hairy, spotting a gap and then thinking, “Oh Christ. The engine’s nodded off.”

Even the sat nav is lazy. After you’ve given it the first four characters of a postcode, it can’t be bothered to listen any more and finds what it thinks is roughly the right road to nearly where you’re going. In some cars these days the sat nav will suggest alternative routes to miss jams that lie ahead. Not the BMW. It can’t be bothered. It likes jams. It can have a nap.

I know a great many people who would absolutely love this car. People who have a few bob and want to park something a bit tasty on the drive. But who actually can’t abide driving and aren’t very good at it. The 640 would be perfect, because it isn’t really a car. It’s a bed. When you climb into most BMWs, you feel as if you should be wearing racing bootees and a suit made from Nomex. In this one, the correct attire would be a pair of pyjamas.