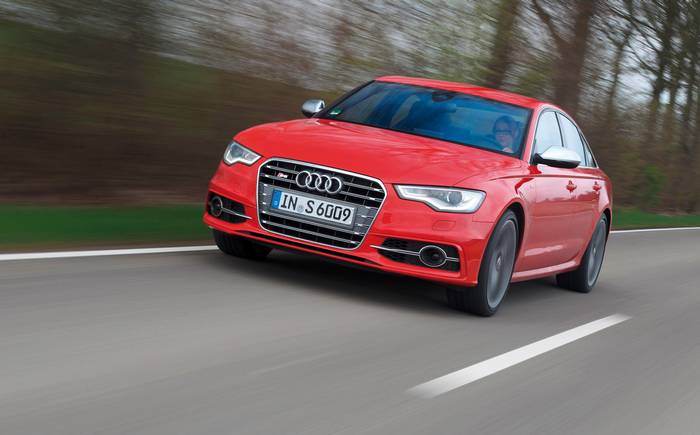 The results of a continent-wide survey are in and it’s been announced that the Italians are the worst drivers in Europe. Apparently this is largely due to a strong showing from the Italians themselves, 28% of whom said, “Yup. Nobody does it worse than us.”

Well, I’m sorry, but I’m incredulous about this, because the Italians are in fact the best drivers, not just in Europe but anywhere. They get to where they’re going more quickly, and they have more fun on the way. They also look good in the process.

Search for and buy a Audi S6 on driving.co.uk

Just last week I was driving from Turin to Milan in a car that develops 662 horsepower. It was plainly very fast and I was plainly in a big hurry. But that didn’t stop every single Italian I encountered trying to get past. The Italian driver must overtake the car in front. This is a rule. Even if the car in front is an F-15E Strike Eagle and you are in a 17-year-old Fiat with a two-stroke under the bonnet, you must get past or you are not a man.

They say that you never feel more alive than you do when you are staring death in the face. Which is why my drive though Rome last year in a Lamborghini Aventador was such an unparalleled joy. You can’t daydream there; you can’t take in the views. Many Roman drivers have no idea the Colosseum is still upright: they’re so busy concentrating on getting past the car in front, they’ve never even noticed it.

Flan Sep 30: Clarkson Audi You can’t help but notice, though, the weeping American tourists, marooned on traffic islands, wondering through heaving sobs why no car will stop at the pedestrian crossing. Because they’re racing, you witless idiots.

However, what makes it different from any race you’ve ever seen is that no one knows where the finish line is or where the other competitors are going. That’s what adds to the sparkle.

I was once on the autostrada outside Pisa when the car behind indicated it wished to get past by nudging my rear bumper. It was quite a hefty nudge, if I’m honest. Which is why I was so surprised to note the vehicle in question was being driven by a nun. I promise I’m not making this up. I was rammed out of the way by a nun in an Alfa Romeo.

What fascinates me is that when you drive to Italy through France, you have mile after mile of belligerence and arrogance and big Citroëns being in both lanes at once. Then you go through a tunnel and on the other side everyone is stark, staring bonkers. Rude on one side of a hill. Mad on the other. It’s strange.

Other nations to do badly in the survey are the Greeks, who drive very much like the Italians, only without the panache, skill or style, and the Germans. Ah, the Germans. I don’t think they are necessarily bad, but it is the only country in the world where I sometimes feel intimidated. As if the man coming the other way really would rather die in a huge head-on smash than pull over a bit. Apparently, the best drivers in Europe are the Finns. How can we be sure? I’m the only person I’ve ever met who’s been to Finland. The Brits come eighth, and there can be only one reason for such a poor showing: the sheer number of Audis you see whizzing about these days.

There was a time when Audis were driven by cement salesmen, but in recent years they have become the must-have accessory for squash- and golf-playing winners. And squash- and golf-playing winners don’t have the time or the inclination to let you out of a side turning, that’s for sure. Also, Audi drivers have it in their heads that the stopping distances in the Highway Code are given in millimetres. You check next time you’re being tailgated. I bet you any money the culprit is in an Audi.

This used to be a BMW problem but today BMWs are rather too restrained and tasteful for the world’s winners. The slight flashiness of an Audi goes better with the pillars outside their houses. That said, the new S6 is really rather good-looking. The wheels are especially handsome and overall it has the look of a BMW, the look of a car whose body has been stretched to the absolute limits to cover the wheels; the look, in short, of a car that can barely contain its muscle.

The muscle in question is actually smaller than it used to be. In the old S6 you had the Lamborghini V10 but that’s gone now, a victim of the relentless drive for better emissions and improved fuel economy. So instead you get a twin-turbo V8, the same unit Bentley is using in the basic Continental GT these days.

Obviously the power is down a tad from the old V10. But you still get a colossal shove in the back when you floor it, and a sense that even with four-wheel drive the tyres are scrabbling for grip, like a girl in a horror film running away from the monster in the wood.

Sometimes you think there may even be too much power, because this is not a sports saloon. It may look like one, with its silver mirrors and its fancy wheels and its V8 badges on the front wings. But the steering is not sporty at all. And neither is the ride.

Gone are the days when Audis jiggled on rough roads. Some were so bad, I often thought I was going to have an aneurysm. The new models, though, even the fast ones such as this, are extremely good at isolating occupants from the slovenliness of the British roadwork Johnny. Doubtless there will be a harder, more focused RS6 in due course, but for now what we have here is a comfortable, economical, fast and good-looking cruiser.

Inside, you get quilted seats. And I’d like to say at this point how much I hate their vulgarity. But sadly I can’t. Because they look great. The equipment levels are pretty impressive too. Put it this way: if there’s a gadget you’ve seen in another car of this type, you can be assured it’s available in the S6.

It’s a silly John Lewis-style price-promise game played by Audi, BMW and Mercedes. When one of them introduces a new toy such as a head-up display, the others follow suit. In the S6 I notice that Audi allows you to choose how long you would like voice commands to be. The others will have that feature in a year.

Jaguar should play a joke on the Germans and say its next car will have a ski jump in the boot. Or an aquarium in the glove box.

Until then, though, the S6 is a good, well-judged car that would make a great deal of sense in Italy. Here in Britain,  however, it will be bought and driven extremely badly by people you wouldn’t want round for dinner. For that reason, I still slightly prefer the BMW 5-series.

Search for and buy a Audi S6 on driving.co.uk