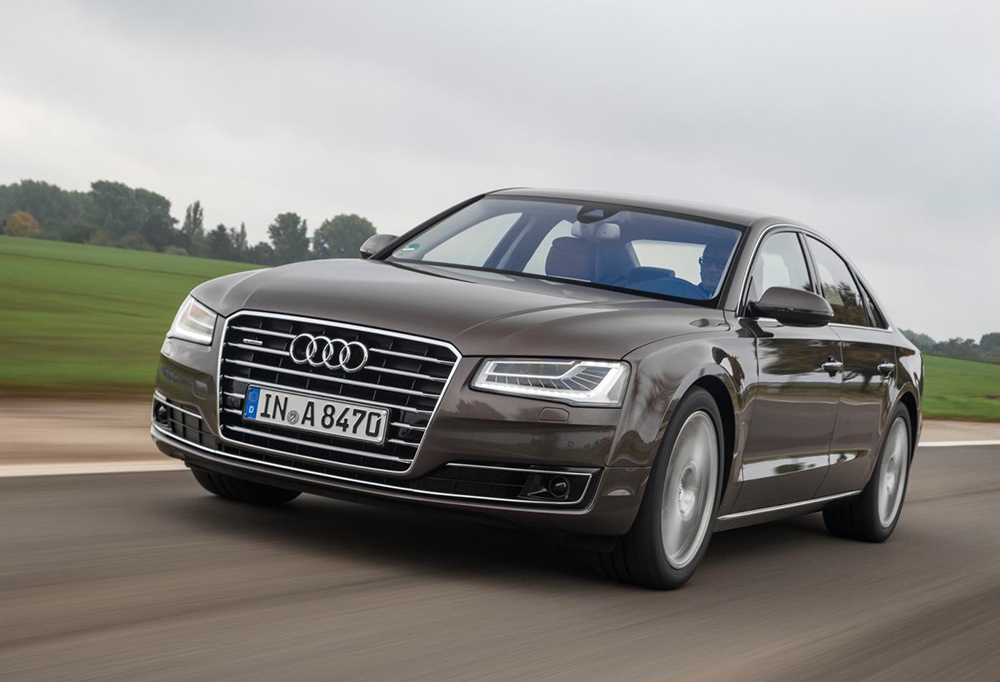 HALFWAY UP the M1 on a blowy, bright spring day — the sort of spring day when you can race the clouds north — we stopped for breakfast. The photographer Tom Craig and I have done this trip to Scotland so often that we can tell the difference between motorway service stations.

Tom parked the Audi A8. He’s a bit obsessive-compulsive about parking. Actually, he’s up the tartan end of the spectrum about it. There are places that are OK and there are ones that definitely aren’t OK and no one but he can tell the difference. The car has to be square to the white line and pointing towards Mecca. Or the sun. Or something. And never beside a caravan because caravans are bad karma.

So we’re inside, looking out over the remains of a full English, and I am staring into the car park and I say, “Someone’s nicked the motor.”

And Tom replies, “They can’t.”

Tom says, “It can’t have gone. I locked it twice. It locked itself in that smart, I-know-you’re-leaving-me sort of way, and then I locked it again because I am careful like that. And it’s got all the cameras in it and your teddy bear in the boot.”

I say, “It’s not there.” We look at the half-empty car park.

No, that’s beside a caravan.

In the end we have to go out and call for it like a lost dog with the electric sex-toy thing they give you instead of a key now, and it blinks and wiggles its boot. It’s right in front of us. That’s the first thing you should know about the Audi: it’s utterly forgettable to look at. It’s a stealth car. It’s what you’d want if you were a proper spy. James Bond might go for the Aston Martin but George Smiley would have the Audi.

Search for and buy a used Audi A8 on driving.co.uk

If your mates were setting you up with this Audi as a blind date and you said, “What’s she like?”, they’d say, “She’s clever.” And you’d say, “Oh no — you mean she’s a munter!” Blokes say cars are clever when they look like the back end of a fat girl.

“No, no,” they’d say. “She’s comfortable and nice-looking. Not page 3, not all curves and throbbing exhaust, but elegant. She’s classy.”

But you know you’d wake up next to the Audi and you’d forget its name.

“Are you Mercedes? Are you BMW? I’m terrible with names.”

But the Audi wouldn’t mind; it would just reply in a silky voice, “You are 30 miles from a petrol station. There are two pizzerias within four minutes. My temperature is a comfortable 22 degrees and I am not pregnant.” 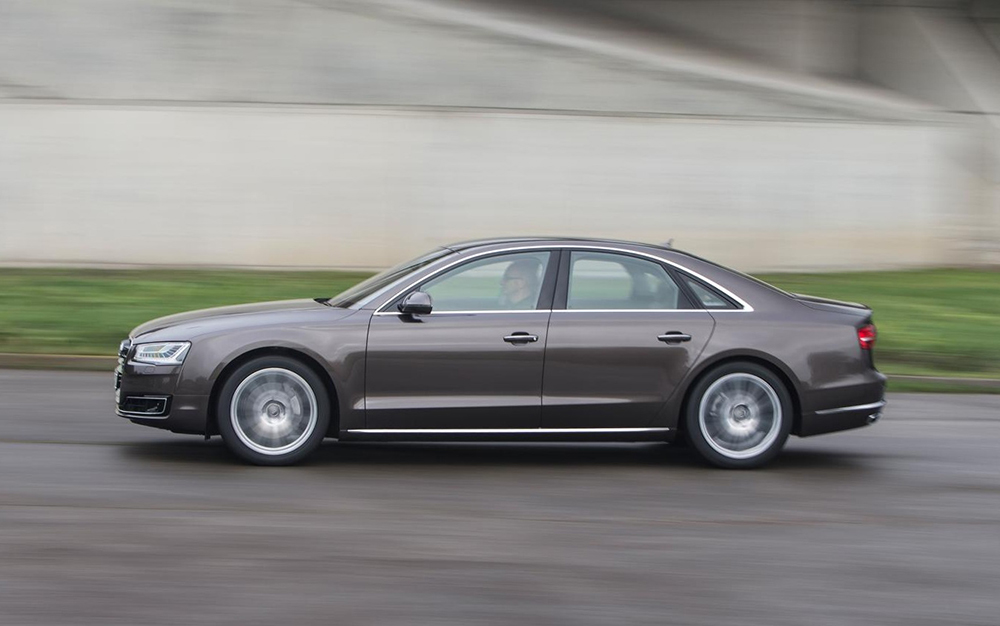 The Audi looks exactly like all its competitors, all the other top-of-the-range executive saloons. They are chief executives’ desks. And for those of you who don’t have a chief executive’s desk, they look like all the cars that are double-parked outside Scott’s restaurant in Mayfair during London fashion week.

It’s what Americans call a “town car”. An expensive taxi. If you had one of these in modest Copenhagen, your Danish friends would say, “How much to the airport?” and laugh. In Scandinavia executive limos are driven only by first-generation immigrants as a job. You wouldn’t order one if you were getting married in church but you probably would if it were a register office.

The Audi is utterly forgettable to look at. It’s a stealth car. It’s what you’d want if you were a proper spy. James Bond might go for the Aston Martin but George Smiley would have the Audi

To some men all this is a plus. And it is only men who are going to want this car. Men who like anonymous things, who think spending a considerable amount of money on something rather plain is a sign of square-jawed self-confidence. Men who don’t need Qatari princes’ status symbols or teenage Silicon Valley billionaires’ dream rides. This is the car for men who like to say, “I don’t want my possessions to say, ‘I’m going places’; I want them to say, ‘I’ve arrived.’ ”

And when you sit in the Audi and start driving, you realise what they mean. Well, obviously you haven’t arrived, or you wouldn’t be driving. But it’s not just smooth and quick and solid and confident — all those adjectives that men with greying temples and muscular frowns like to apply to everything in their lives. It whispers to you: “If you were a car, I’m the car you’d like to be.” 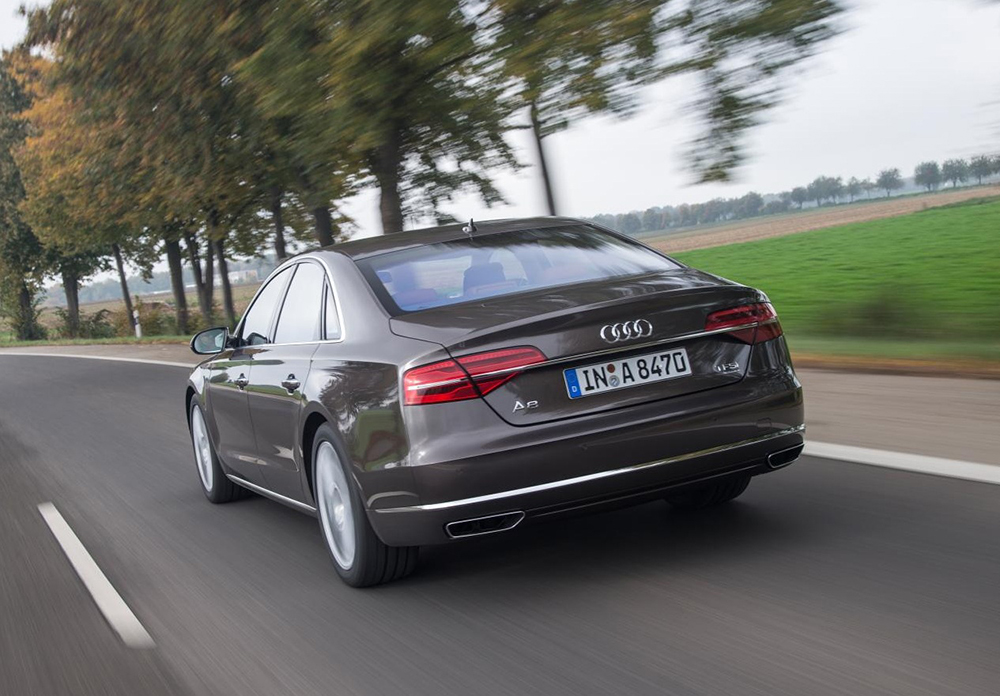 On the motorway it eats the tarmac like a cardinal sipping espressos: quickly, neatly and without ostentatious displays of pleasure. What’s interesting is the reactions of other cars. They treat the Audi with respect but not fear. They let you past without your having to flash but they don’t swerve across two lanes because you might be a drug dealer, a drug user or a member of a boyband.

You’ve never seen an Audi A8 driven badly. I don’t think it’s possible — this one takes hold of the steering wheel if you start being erratic. You won’t find footage on YouTube of kids doughnutting it in downtown Dubai. You’ve never seen an Audi sitting awkwardly on the verge, having rear-ended a Volvo full of an Indian wedding party just outside Wolverhampton. It just doesn’t happen. 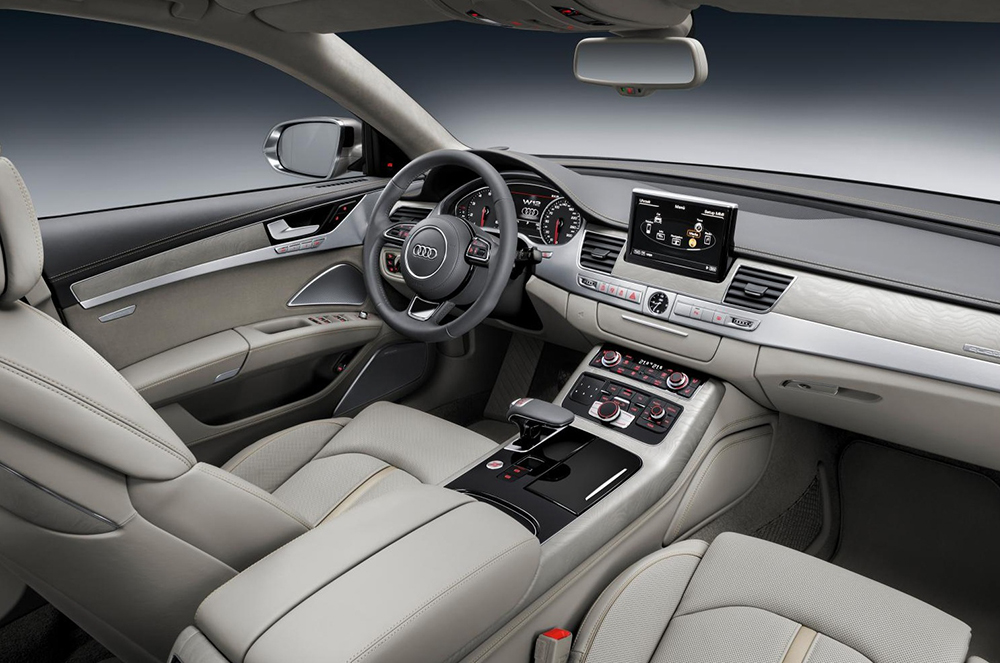 Our Audi was a diesel, and I’ll pass on this little fact about diesel Audis. Fill up the tank on your wedding anniversary and when it flashes up empty it will be your anniversary again. It’s a useful way to remember significant dates. We drove all the way from London to Edinburgh and halfway back without bothering a fuel pump.

The car has all the illuminating information things that men who like Audis like. The dashboard tells you masses of statistics and useful nerdy facts. There is the option of a head-up display that will project the map on to the windscreen so that you can imagine you’re off to bomb Coventry again.

On the motorway it eats the tarmac like a cardinal sipping espressos: quickly, neatly and without ostentatious displays of pleasure

It has an incredibly complicated sat nav system that can show you where you’re going from three angles, but if you push the wrong knob it will turn the whole interior into a mellow, late-night Michael Bublé club with low-level lighting and lumbar support. But we got to Motherwell before I found the cupholders.

The Audi does have one amazing, inexplicable trick up its dashboard. It obviously has cameras front and rear to stop you crashing. But when you reverse, the car shows you a moving image of your vehicle in real time from above. Also the road you’re on, the cars parked beside you, the street furniture and the road markings. How can it do that? There isn’t a camera hovering above you at all times. I know — I looked.

It’s an almost pointless but immeasurably impressive bit of stuff. Just the sort of kit that makes the sort of man who is sort of thinking about a new saloon sign on the dotted line. The one thing it doesn’t come with is the one thing it yearns for. A Kosovan driver in a tight suit who never sleeps.

For men who like their possessions to say, “I’ve arrived”

Search for and buy a used Audi A8 on driving.co.uk