By James Mills
Share Article
So good, even badge snobs should take a test drive.
Pros
Practical cabin
Affordable to buy and run
Mildly fun to drive.
Cons
You have to lift out the heavy rear seats for maximum boot space.
Cars > Skoda > Yeti 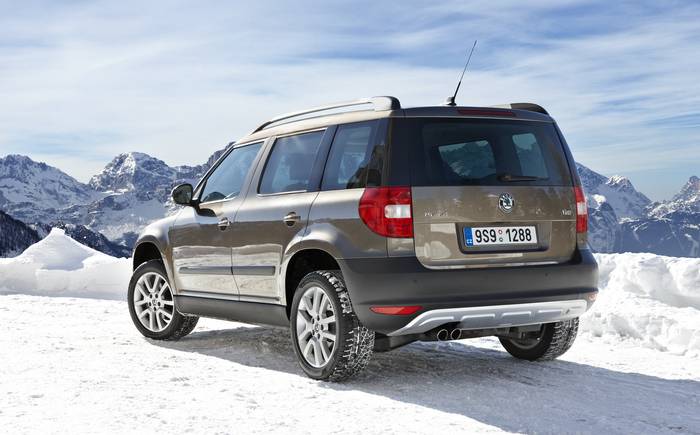 What the Skoda Yeti?

You’re looking at one of Jeremy Clarkson’s favourite cars. And in case you’re considering its key rival, the Mini Countryman, don’t: the Yeti is at least as good in almost every respect and costs £3,000 less.

What is it that makes the cheekily named Yeti a hit with the world’s most outspoken car critic? The fact that it’s fun to drive, practical for a growing family, robustly built and good value.

Search for and buy a used Skoda Yeti on driving.co.uk

Our favourite variant is the economical 1.6 TDI diesel, which can return as much as 60mpg if driven prudently. It’s a two-wheel-drive version, priced from £17,155. However, part of the Yeti’s attraction is that it can cope well in abominable conditions, thanks to an accomplished four-wheel-drive system that’s offered with the higher-powered diesel and petrol engines. You’ll have to spend at least £18,635 to own a Yeti with go-anywhere ability.

Although it’s a cross between a family hatchback and a 4×4, the Yeti is nearly as comfortable and manageable to drive as, say, a VW Golf, yet surprisingly good fun on winding roads. In fact, we’d go so far as to say it can put a smile on a driver’s face, thanks to an equal helping of grip at all four wheels that gives it a balanced stance in cornering, and a steering system that allows the driver to feel how much purchase the tyres have on the road.

When you’re not in the mood for tearing around, the Yeti feels grown-up. The 1.6-litre diesel engine is reasonably refined and pulls effortlessly from just 1500rpm, making it flexible in all driving conditions. Yet it has enough urgency to see the Yeti past slower traffic without leaving the driver in a cold sweat. On main roads you will hear a little bit of wind noise and tyre roar, but the ride is supple and the five-speed manual transmission is easy to get along with.

Living with a Yeti will prove painless, as its cabin is almost as versatile as those of the best small people carriers. In fact, the only thing that holds it back is that the three independent rear seats don’t fold flush into the floor to obtain the maximum load capacity of 1,760 litres — they have to be folded and tumbled forward and then hoisted out one by one. But even with the rear seats in place the boot space is 416 litres.

As the car’s upright and squared-off body design suggests, there’s plenty of space for passengers. Headroom, legroom and shoulder room are all impressive, and the Yeti accommodates four 6ft adults with ease ― if not quite four abominable snowmen. The rear seats slide backward and forwards for more or less legroom or luggage space, and with the centre seat removed, the two outer seats can be edged toward the centre of the cabin to give two passengers more comfort.

The driver’s environment is clear and supportive. The seat and steering wheel adjust for reach and height, the dashboard is straightforward and easy to operate and the standard of fit and finish throughout the cabin feels high enough to withstand anything a young family will throw at it. Visibility is excellent for driver and passengers alike, thanks to the expanses of glass.

What to look out for when buying a used Skoda Yeti

Skoda owners are mostly a happy bunch — they consistently rate their cars well in customer satisfaction and reliability surveys, and praise the service from Skoda dealerships. Skoda has been in the top 10 in the British JD Power survey for the past 19 years, coming second in 2012. However, the Yeti has not escaped some of the wider Volkswagen Group woes, and owners have reported faults in the DSG transmission, excessive oil consumption from the TSI and TFSI engines, sooting-up of diesel particulate filters and failure of the diesel fuel pump.

All that said, plenty of owners appear to be absolutely delighted with their purchases, and the Yeti won the 2012 Auto Express Driver Power Survey (the Skoda Superb was second and the Octavia fourth).