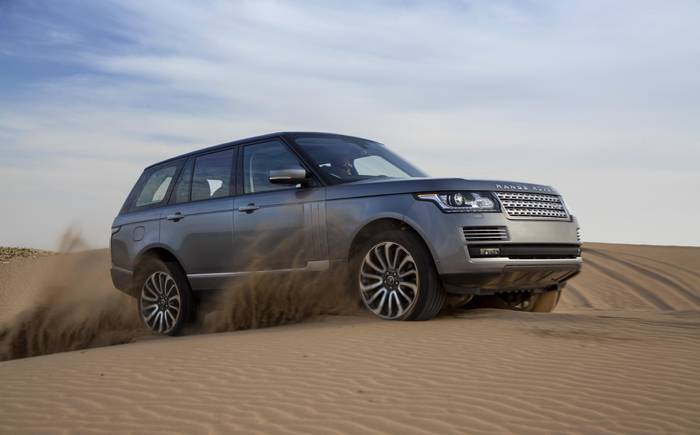 If you’re in the market for a big, luxury SUV and are willing to spend more than £70,000, then the chances are that this brand-new version of the king of off-roaders is top of your list. Sensibly, Land Rover hasn’t changed too much of the Range Rover’s classic exterior design but says that it has improved the model’s essential ingredients: a luxurious interior, smooth ride and crushing off-road ability. Meanwhile, there have been significant changes under the vehicle’s skin, not least the introduction of all-aluminium underpinnings that have reduced the car’s weight by almost half a ton and which promise to improve fuel economy and driving appeal.

The reduced weight means that the car is now available with a 254bhp diesel V6 engine. This has a combined fuel economy figure of 37.7mpg, as well as a reasonable 0-60mph acceleration time of 7.4sec. A familiar V8 diesel option is also available for an extra £7,000. The 334bhp motor shaves almost a second off the acceleration time but fuel economy suffers; its official figure on the combined cycle is 32.5mpg. The V8 car is also fitted with Range Rover’s dynamic response system, which helps keep the car level in corners by reducing body roll. Finally, perhaps for those who aren’t paying their fuel bills, there is also the option of a V8 petrol version costing more than £98,000. Its official fuel economy figure is 22.1mpg (so expect less than 20mpg in the real world). It will, however, accelerate from 0-60mph in 5.1 sec, the same time as a Porsche Boxster S, thanks to the 503bhp from its engine.

Trim levels range from Vogue, through Vogue SE to Autobiography, with a wide range of personalisation options, including any paint colour of your choice and monogrammed door sills. Although it may now be an alternative to a Rolls-Royce or a Bentley, the Range Rover still manages to retain a hint of its agricultural workhouse background. This has helped it appeal to an array of buyers, from those planning to take it grouse shooting to others who are more likely to take it on a tour of Essex nail bars.

Any owner of the previous-generation model will be instantly familiar with the new car’s imperious driving position and controls. Move off and the Range Rover now glides down the road with even fewer jolts than before. It’s not quite the “magic carpet ride” Land Rover claims but there’s little else out there that rides so smoothly. Once underway and amazingly, given its bulk, there is little wind noise at motorway speeds.

It doesn’t take long to feel the benefits of all that aluminium. The lightest Range Rover still weighs more than two tons but it is noticeably more agile than the previous model, both accelerating and turning. This is especially true of both V8 models equipped with the dynamic response system as standard. These cars barely roll at all, even during fast cornering, thanks to hydraulics that, essentially, prop up one side of the car as it turns. The system is so effective that it’s worth paying the additional £7,000 for the V8 diesel car just to have it (it’s not available on the V6).

Dynamic response aside, the V6 car doesn’t feel like an entry model. Its engine has easily enough power but the V8 suits the Range Rover’s character better. It has enough oomph, even at low revs, to ensure that the car will surge forward when you press the accelerator, no matter which gear the automatic box is in. In contrast, there can be a split-second delay with the V6 as the gearbox shifts cogs. Choose the V8 petrol car and you’ll feel as if there’s a ship’s engine room under the bonnet – with the associated running costs.

Few owners will take their Range Rover off road but the model’s ability to go further than virtually any other road vehicle is crucial to its image. There’s a mass of electronic and mechanical gadgetry to ensure that the car maintains its reputation but there’s no need for owners to acquaint themselves with differentials, gear ratios or traction control settings. Especially now that the car’s optional Terrain Response 2 system now has an auto setting, which detects the surface the car is driving on and adjusts everything automatically. It works very well, as Land Rover demonstrated to journalists across sand dunes, mud tracks and through a river (the car’s wading height is now 900mm). It doesn’t mean that the car will plough on regardless; jutting rocks, steep angles and boggy ground can defeat it. However, if the Range Rover won’t get you across country, you probably need a tank.

This is where the Range Rover’s Hollywood transformation from 1970s farm workhorse, with hose-down interior, to modern limousine is most apparent. Acres of leather, wood and deep-pile carpet are standard even on the entry-level car, along with supremely comfortable seats, an electronic split rear tailgate and a touchscreen in the middle of the dashboard (which means that the rest of the fascia is free of too many dials).

Worthwhile options include the surround camera system, which provides a 360 degree view that is as useful when you’re parking as it is when threading your way through jagged rocks on a mountain pass, and the Terrain Response 2 system. The one unknown at the moment is the car’s reliability. Land Rover has an appalling record in this area. Only time will tell if it has banished the previous model’s gremlins.

The one to go for