Home > Car Reviews
By Dominic Tobin
Share Article
Fun, energetic and lively ‒ but you have to be in the mood
Pros
Precise and grippy cornering
Cheaper than the competition
Responsive petrol engines
Cons
Styling can divide opinion
Firm ride and wind noise
Only two seats
Cars > Mini > Coupe 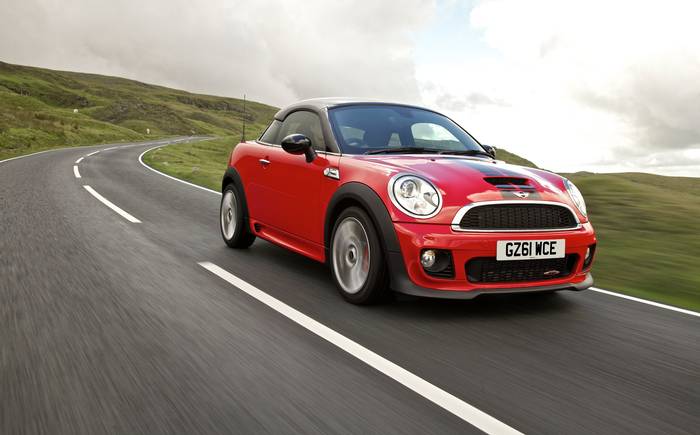 Here’s another model that expands Mini’s range beyond the now-familiar three-door hatchback. The coupé has only two seats and is tuned to be more sporting than the rest of the family. To drive the message home, it’s been given sleeker looks and a back-to-front baseball cap roof that screams “yoof”. Mini hopes that the car will attract more male buyers to the brand, although it seemed to appeal more to women than men during Driving’s time in the car.

From its bug-eyed headlights to its dashboard the coupé borrows extensively from other Minis. The engine line-up is no exception. There are three grades of petrol engine, all 1.6 litre, four-cylinder units. The entry-level model, the Cooper, is powered by a 122bhp motor that propels the little car from 0-62mph in a leisurely nine seconds. The next model up the range, the Cooper S, has a 181bhp turbocharged unit while the range-topping John Cooper Works has a fire-breathing 208bhp turbocharged engine. This powers the car from 0-62mph in 6.4sec, half a second quicker than the S. A single diesel engine is offered in the Cooper SD producing 141bhp and a 0-62mph time of 7.9sec.

Rivals such as the Audi TT, BMW 1-series coupé and VW Scirocco all start at more than £20,000, making the Mini appear good value in comparison. This is especially true in the case of the Cooper S, which costs from £19,785. It has the more powerful engine and equipment including air conditioning that is lacking on the basic Cooper. Bear in mind that the opposition does have rear seats, though.

From the moment you turn the key of the Cooper S and the engine yaps into life, the little car takes on the character of an excitable puppy that just wants to play. Squeeze the accelerator pedal and the Mini leaps forward; nudge the wheel in either direction and the car darts left or right. It’s entertaining even at inner city speeds but out in the country, when the engine can be revved to beyond 5,000rpm for maximum power, is where the Cooper S is most at home. The Coupé grips tenaciously as you hurl it around corners. You don’t need to be going anywhere near 60mph to have fun. If you are going quickly and find yourself in a corner that’s tighter than you expected the car will wag its tail, the stability control allowing the car’s rear to slide a little, gently and predictably.

Like any puppy, though, the Mini’s charm is in its enthusiasm rather than its overall ability. The suspension struggles if you run over a pothole or manhole cover while cornering, the jolt pitching the car onto a slightly different trajectory. It is also set up for a firm ride (firmer still on the John Cooper Works model). Although it’s not unbearable on long-distance journeys, the Cooper S is not a car that will leave you arriving totally relaxed.

Some drivers will love its personality; others will find the quick steering, stiff suspension and instant bursts of acceleration too wearing for everyday use. But whether you like it or not, the Coupé is determined to put a smile on your face. If you are going to restrict yourself to a two-seater, let alone one with such exuberant looks and behaviour, then you might as well have the engine to match. For that reason, it would seem sensible to order your Coupé with either of the two most powerful petrol engines. As good as the diesel engine is in other Mini models, it is likely to feel underpowered in the Coupé. The same goes for the entry-level petrol car.

Other aspects of the Coupé are also likely to prove divisive. Like the rear spoiler that flips up at 50mph and down at 37mph, meaning that it’s bobbing up and down in your rear view mirror on rural roads as your speed rises and falls for corners and other traffic. Or the droplets of fuel injected into the exhaust in Sport mode, which give a pop-pop noise like a “proper” sports car when you change down a gear. Some will love the added character. Others will find them gimmicky and artificial.

This will be familiar to anyone who has sat in one of the current-generation Minis that first appeared in 2006. You would never guess that the design is seven years old. It still feels fresh and novel with its line of traditional rocker switches divided by solid metal hoops and the giant speedometer in the centre console, rendered fairly useless by the speed readout on the digital display underneath the small rev counter in front of the driver. But while the dashboard still looks good, it’s fairly unclear which switch is which, until you become familiar with the layout.

Equipment levels are reasonable, although extras such as the navigation system, which features a display screen in the middle of the speedometer and which also controls your phone through the car, are expensive. The optional leather seats have a suitably retro look but are surprisingly comfortable. They’re a welcome touch in what can be a gloomy cabin. Behind you there’s a reasonable amount of storage space in the little car’s 280-litre boot.

The one to go for