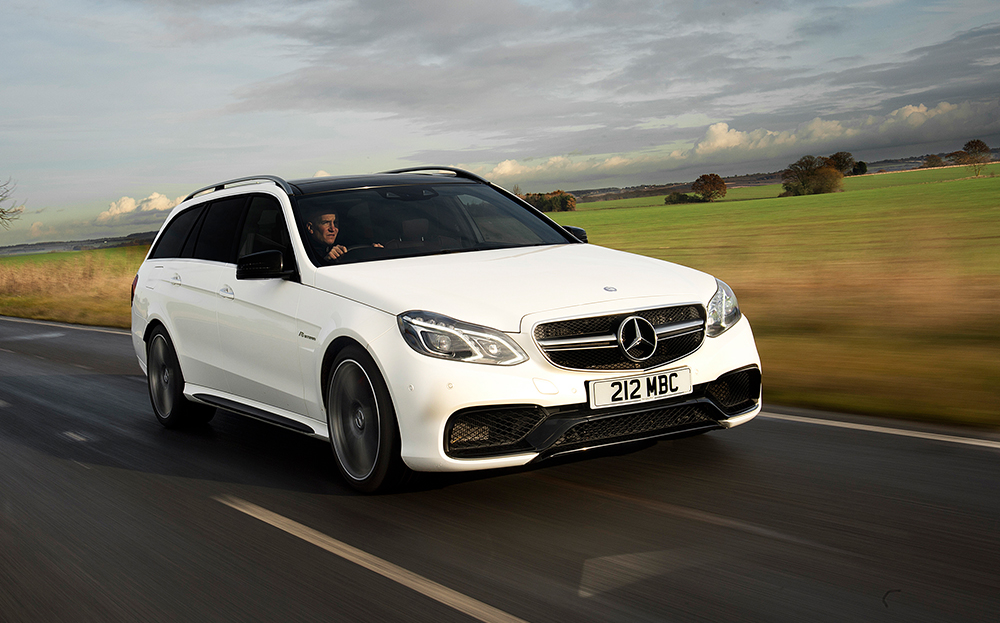 What is the Mercedes-Benz E63 AMG estate?

This is the perfect car for the school run – the racing school, that is. The E63 AMG estate is one of those rare, satisfying cars that can do anything its owners ask of it.

School run? As easy as one, two, three – the car’s a doddle to drive and comfortable too. A Sunday morning blast to, ahem, pick up the newspapers? Why of course – the AMG tuned engine, suspension and brakes will blow your mind. Or how about carrying that old bath and sink down to the tip? No problem – this is the largest estate car on sale.

It really is one of the fastest and most exciting high performance cars made by AMG, all the more desirable in the daily grind of the real world because it’s so practical and doesn’t try to attract attention like a B-lister on Celebrity Big Brother.

Search for and buy your next Mercedes E-class here

It’s hard to nitpick with this car. On the Continent, Mercedes offers a four-wheel drive model, but that’s not available in the UK. Instead, it’s rear-wheel drive, so in the winter, the Mercedes’ traction control system will be kept very busy indeed. Of its two obvious rivals, the Audi RS6 Avant and Jaguar XFR-S, the Audi offers all-wheel drive.

That’s probably the only other snag in this niche corner of the car market. There’s precious little competition – choice – for buyers. At the local Mercedes showroom, though, there is also the C63 AMG (with a naturally aspirated engine) and the CLS 63 AMG Shoooting Brake. But take it from us, once you’ve tried the E63 AMG S, you won’t want anything else.

Any owner of an E63 AMG with a family in tow will have to get used to requests from little back seat drivers, along the lines of:

“Oh yes, so there is. Shall we take a better look at it?”

And so, with a flex of the right foot, the two turbochargers send air rushing through the V8 engine’s cylinder chambers and the E63 reels in the supercar ahead. 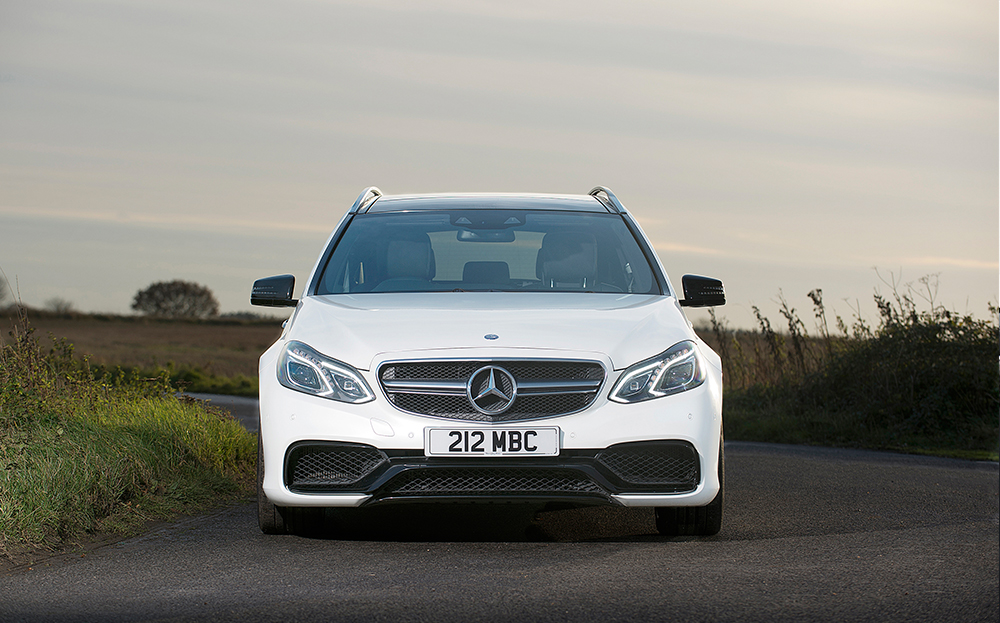 The S version that Driving tested is breathtakingly fast. You might glance at the acceleration figure – 0-62mph in 4.2seconds – and think to yourself, ‘it doesn’t sound like it would worry a supercar’. But the only reason it doesn’t go faster is that, simply put, the wide rear tyres can’t get a good grip of the road until the engine has worked its way up into third gear.

From thereon, the V8’s faintly ridiculous amount of torque – a massive 590Ib ft from 2,000rpm – means that this relatively humble looking German estate car can accelerate like the clappers.

What’s more, the sound will stand everyone’s hair on end – whether passengers in the car or your neighbours when it’s started from cold early in the morning. AMG has tuned the exhausts of the S version to have a deep, ever-present bass-line that will let other drivers at the local tip know that that’s no ordinary estate car which has just pulled up alongside them at the green cuttings bin.

Can it handle this performance? Does it feel exciting, alive even? You bet. AMG has fitted AMG Ride Control, an adjustable damping system which proves surprisingly comfortable in standard mode, and race-track ready in Sport Plus setting.

Through bends, the E63 AMG is far more stable and progressive than its sibling, the CLS 63 AMG Shooting Brake (which suffers from an unduly harsh ride comfort). You can really push on in this car, always confident that the steering system gives you enough information about the remaining levels of grip, and certain in the knowledge that the brakes a capable of containing the V8’s prodigious power.

It’s possible to disable the traction control system and play at being Ken Block within the safe confines of a race track, as the S features a limited slip differential as standard. However, the downside to it being rear-wheel drive is that, come the miserable weather, the E63 AMG S estate can’t put its power down to the road as smoothly as an Audi RS6 Avant. 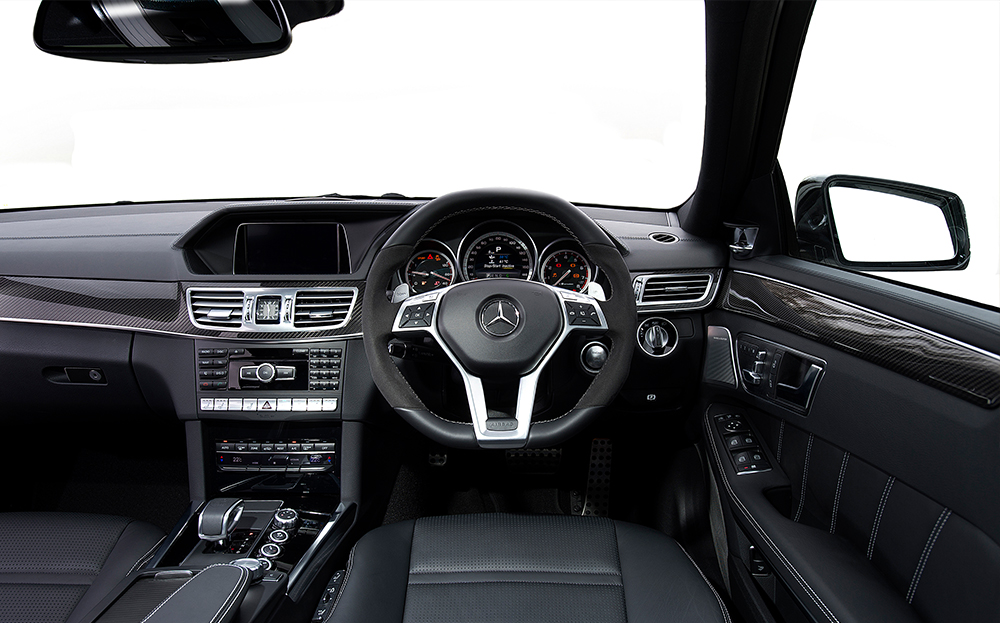 A sufficient amount of tarting up compared with a standard E-class estate makes it feel special, such as the transmission lever, buttons for the launch control system, sports seats, suede-trimmed flat-bottomed steering wheel with paddle shift and even door sill scuff plates which have an illuminated AMG logo.

Those front seats are superb, wrapping around driver and passenger like a glove and the driving position is excellent. This is helped in part by there being so much space in which to stretch out – the E-class estate is the largest, most accommodating car in its class – and by first rate ergonomics.
Of equal significance to buyers of the estate version of the E63 AMG is that there is masses of space on the back seat. It’s flat across the bench, so even the middle seat passenger can sit comfortably, and there are handly release levers for the seat backs situated at just to the side of the outer seats, as well as at the entrance to the boot.
And what a boot. There’s 695-litres of luggage space with the seats in place, a handy luggage net guard that’s built in to the electrically powered load bay cover and when the rear seats are laid flat, you’ve got 1,950-litres of space to play with. Heck, you could get a go-kart and all your spares in there…
The one to buy
E63 AMG S estate
Specifications
Price: From £85,900 (correct at first publication)
Engine: 5461cc, V8 twin turbo
Power: 576bhp @ 5500rpm
Torque: 590 lb ft @ 2000 – 4500rpm
Transmission: 7-speed dual clutch automatic, rear-wheel drive
Acceleration: 0-62mph in 4.2sec
Top speed: 155mph
Fuel: 28.2mpg (combined)
CO2: 234g/km
Road tax band: L (£485)
Dimensions: L 4895mm, W 1872mm, H 1512mm