By James Mills
Share Article
A bold and different SUV that is efficient to own in more ways than one
Pros
Build quality
Refinement
Smooth operation of hybrid system.
Cons
Driving experience won’t be to everyone’s tastes
Loud transmission
No seven seat option
Cars > Lexus > RX450h 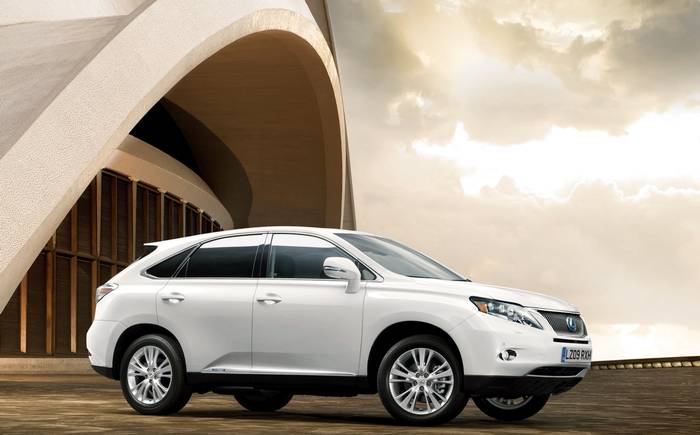 The greenest luxury SUV money can buy — or at least that’s what its manufacturer would have you believe. The Lexus RX range is based around a single hybrid petrol/electric powertrain, making it a class lead when it comes to saving the planet. Its CO2 emissions, 145g/km, are considerably lower than the best of the diesel-powered SUVs on sale, such as the BMW X5 xDrive30d (195g/km), and it’s also some way ahead of a comparable hybrid like the Porsche Cayenne S (193g/km). So if you want to go green and pay less road tax, yet drive a luxury SUV, head to your nearest Lexus dealer.

It’s also well priced. The Cayenne hybrid costs £59,058 against the RX450h F-Sport’s price of £51,995. Like the Cayenne, there’s no seven-seat option. A final tempting factor is that Lexus owners are typically some of the happiest drivers on the road, with independent customer satisfaction surveys placing the brand towards the top for dealer service.

If you haven’t driven one before, it takes a little while to become accustomed to a hybrid car. For starters, when you thumb the ignition button, nothing more than a digital beep and the flashing of instrument panels signal the vehicle is running. The engine stays dormant until it’s needed, so the RX450h defaults to running on battery power at crawling pace.

As you pull away, there’s an eerie silence: you’re moving but there’s no engine noise. That’s because this is a full hybrid system, so the electric motor and V6 petrol engine can operate independently of one another, or together when needed. This generation of RX features new driving modes, including Eco and EV. The EV switches the car to electric power only, and the range is determined by the battery charge. When you want to get a move on, the combination of the two power units is potent (well, technically it’s three, as there is one electric motor dedicated to driving the front wheels and one for the rear wheels, which makes the car four-wheel drive). The RX450h accelerates from 0-62mph in 7.8 seconds, yet can return up to 44.8mpg in daily driving conditions if you behave more like a saint than a sinner, and is exempt from the London congestion charge.

There are irritations. The CVT (continuously variable transmission) is noisy, and choosing between the multiple driving modes is confusing. To be honest, we prefer Eco mode, which reduces throttle uptake to improve fuel economy, as it suits the car’s laid-back character. The handling and ride comfort are nothing special. But so long as you are happy to cruise rather than burn rubber (isn’t that a given in a hybrid car?) it’s perfectly acceptable.

The RX450h feels like a genuinely luxurious car, rather than a polished Japanese runaround, with a smart dashboard that is distinctly designed. There is no shortage of gadgets to play with, including a touchscreen infotainment system, a head-up windscreen display and a premium audio system from Mark Levinson (an option).

Although there is no seven-seat option, Lexus has tried to make the cabin as practical as possible. The rear seats slide backwards and forwards in three stages, allowing for more or less legroom or bootspace. That’s probably a good thing as the boot is smaller than most rivals, at 496 litres. The general standard of fit and finish is outstanding. There are no horror stories (yet) about the hybrid technology, either.

What to look out for when buying a used Lexus RX

Plenty of the Lexus hybrids have now got 100,000 miles-plus under their belts, and Lexus consistently scores well in customer satisfaction and reliability surveys such as JD Power, both in Britain and America. It was named manufacturer of the decade in Auto Express’s Driver Power survey of 2011, with the earlier RX 400h the third-placed model overall.

The RX 300h and RX 400h were recalled in the UK for powertrain control module and power steering faults, but there have been no problems with the RX 450h, and owners appear to have little to complain about beyond disappointing real-life fuel economy. The hybrid-specific components and batteries have separate warranties up to five years or 60,000 miles, and many cars up for sale will come with Lexus’s comprehensive extended warranty giving cover up to seven years old (transferable to second and subsequent owners for £25 each time).

Or For Similar Money