Lexus’ BMW 5-series rival claims to blend the sporty drive of the German saloon with the comfort and pampering the Japanese car maker wishes to be known for. The car also adopts Lexus’ new design template with so-called “spindles” either side of the grille, which help it to look more stylish than before.

Search for and buy a used Lexus GS on driving.co.uk

Underneath the bonnet there is only a choice of two petrol engines: a 2.5-litre V6 in the GS250 or a larger 3.5-litre version in the GS450h, which is a hybrid, costing £12,000 more. It’s a huge premium but the difference in fuel economy is enormous. The hybrid is officially rated at 46.3mpg on the combined cycle, compared with 31.7mpg for the smaller GS250. The former’s relatively low CO2 output of 141g/km makes it affordable as an executive company car, with owners paying 19% benefit in kind tax (at 2013/14 rates), against 32% for the non-hybrid.

It can take an age to set off but that’s entirely down to finding the optimum setting for the optional 18-way adjustable seating. It’s time well spent, though, since it’s impossible not to get comfortable in the heated and ventilated seats. That’s a good thing because when the car is moving, its suspension is unable to iron out the cracks, bumps and potholes that characterise British roads. It is a particular problem in the hybrid even though, at almost two tons, its weight should improve the ride quality.

Out on faster roads, the story gets worse. In the car’s standard mode the ride remains harsh, transmitting vibrations from expansion joints, changes in the road surface and ridges straight through to the driver’s seat. These also unsettle the car, which bounces and suffers from body roll. At times, it’s enough to make the driver back off as the car can seem at risk of bouncing into the next lane on a bumpy dual carriageway.

Higher-end models are fitted with a Sport Plus mode, which does improve handling so that the car is more stable over bumps. It inspires more confidence in cornering, as the car remains flat and precise with far less roll, making it more enjoyable to drive, but does nothing to improve the ride. The F Sport model benefits from rear-wheel steering, which Lexus says delivers more precise cornering.

The lack of refinement means that if you drive the car over a long distance, you are likely to arrive feeling exhausted and relieved to escape the uncomfortable ride. Unfortunately, it also overshadows the engine’s performance. The hybrid GS, especially, feels quick off the line, thanks to the additional surge of torque provided by the battery. This extra power makes the car feel nippy, despite its size and weight. 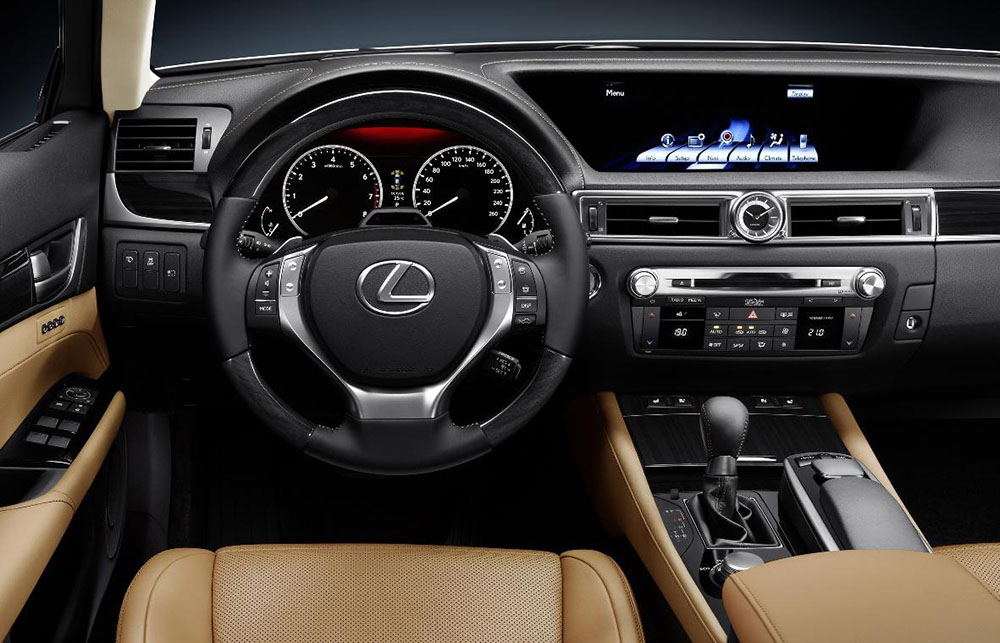 This is a very nice place to be. More expensive models feature a premium sound system with a larger 12.3in screen in the middle of the dashboard, so big that one tester suggested it should be fitted with cinema-style curtains. It’s also available as a £1,000 option in lower grade versions. The mini mouse used to navigate the menus is simple to use, although it seems odd that, in the age of the smartphone, the screen is not touch sensitive.

Rear passengers will have no complaints about legroom and there is lots of luggage space in the boot. Even though the batteries in the hybrid version do reduce its volume by 57 litres, it can still accommodate four sets of golf clubs ‒ the measurement unit of choice for Lexus owners.