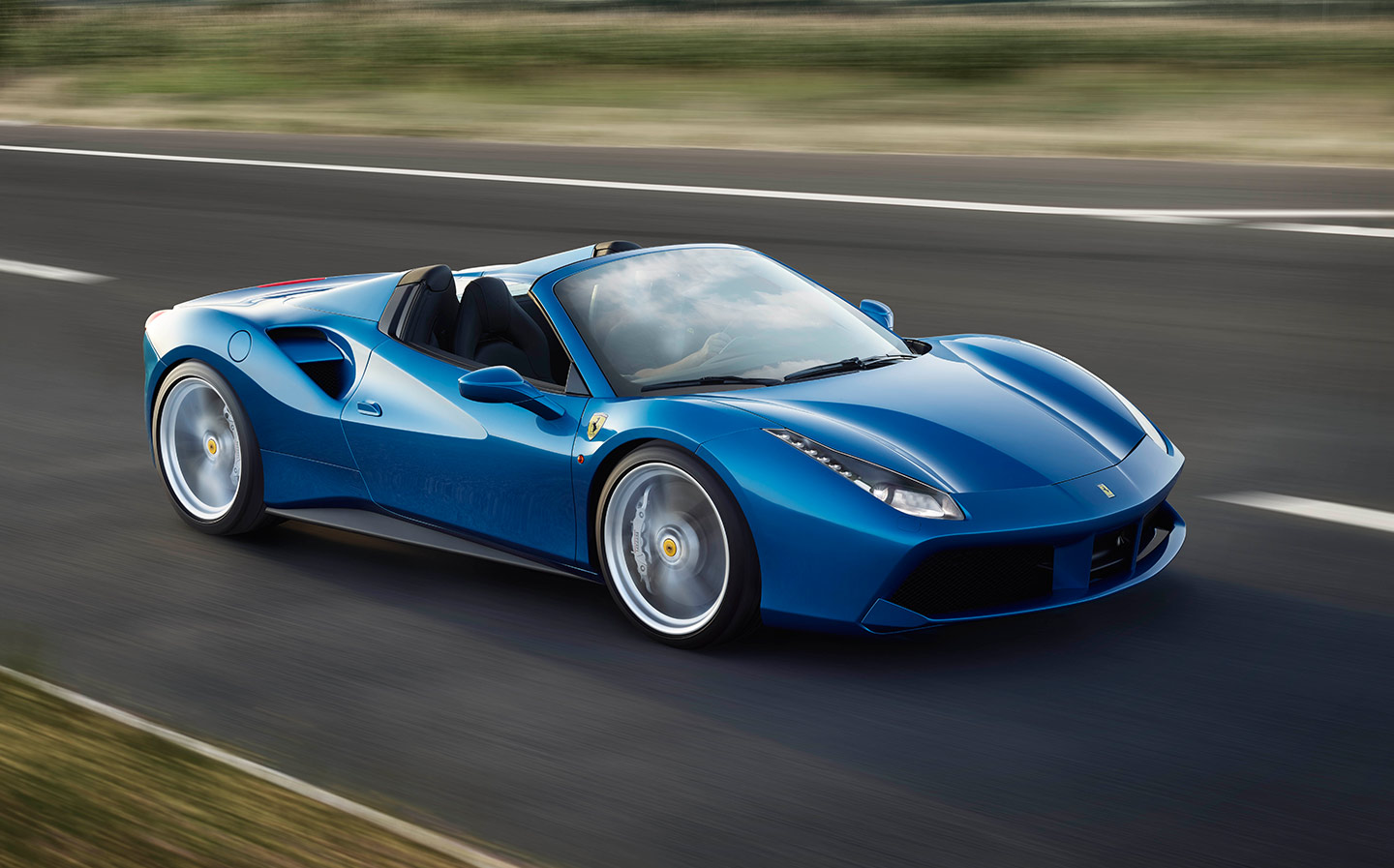 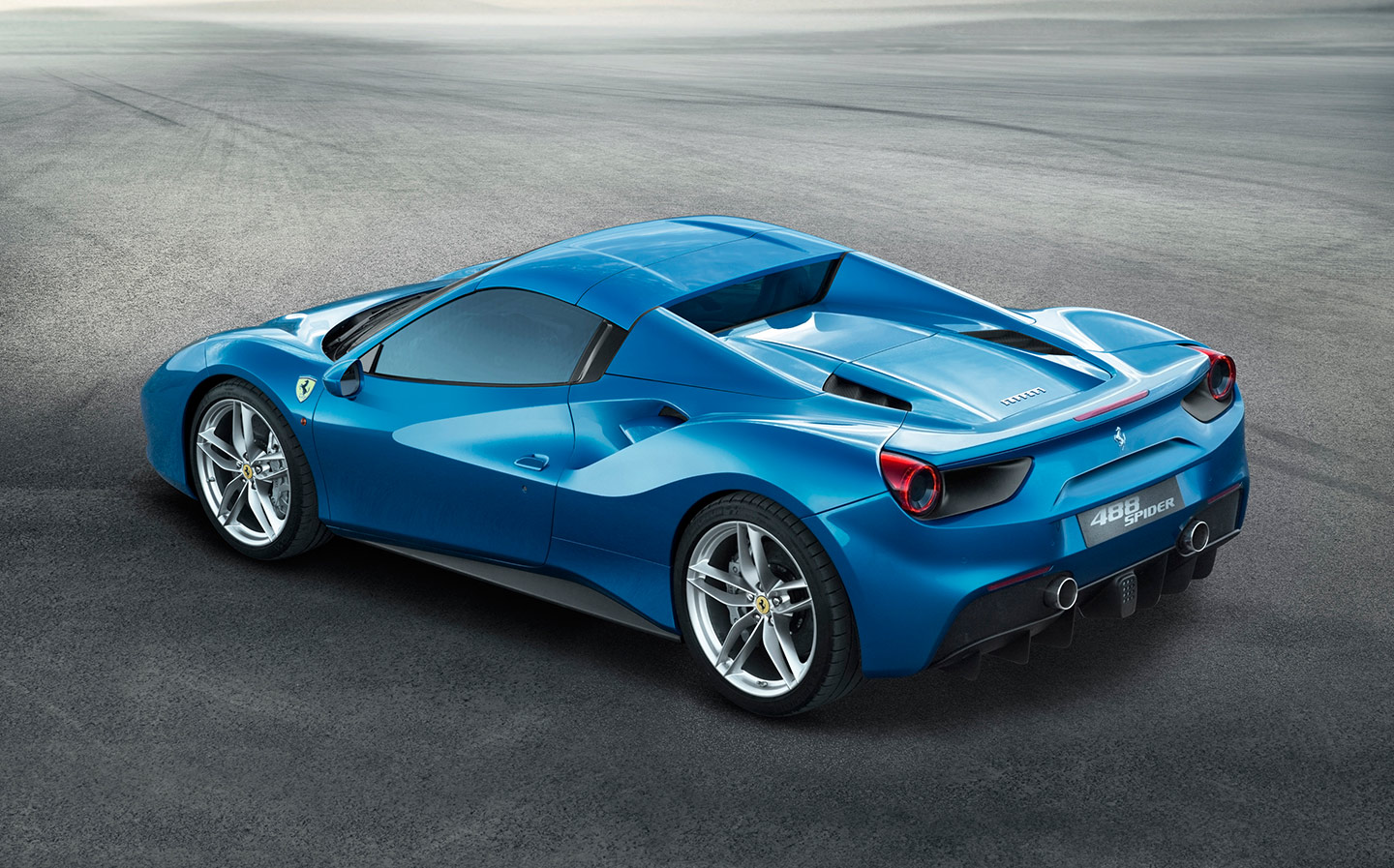 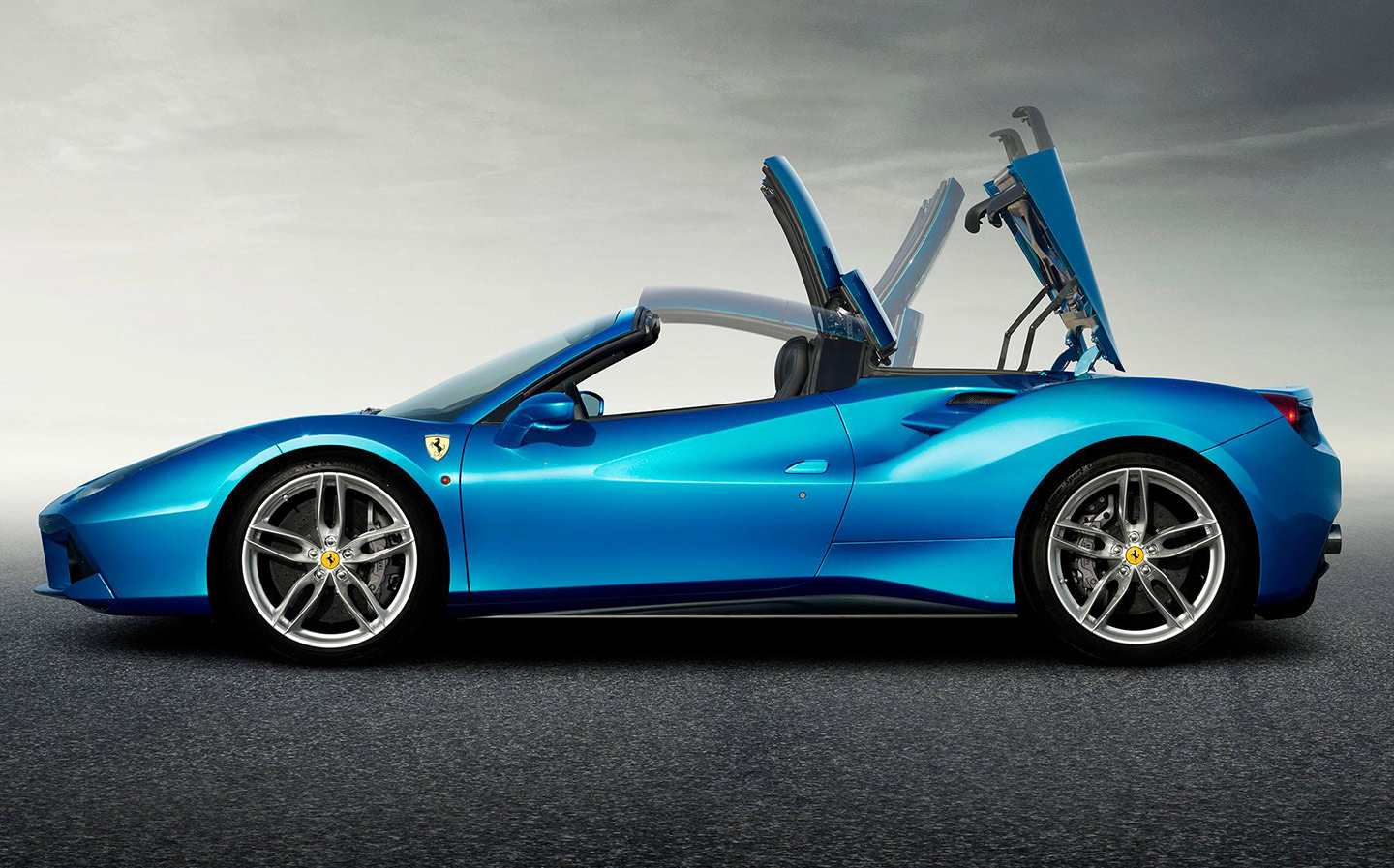 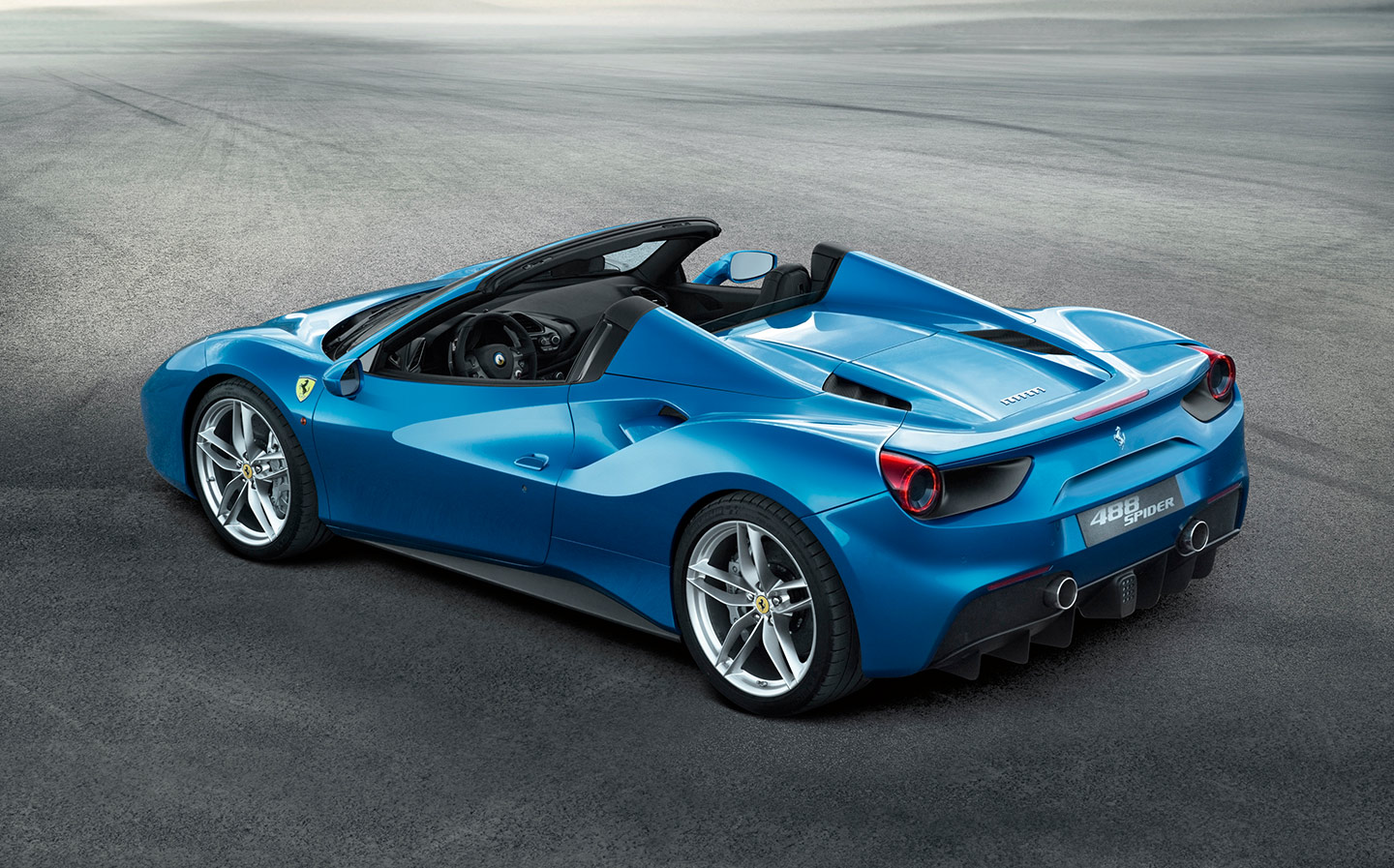 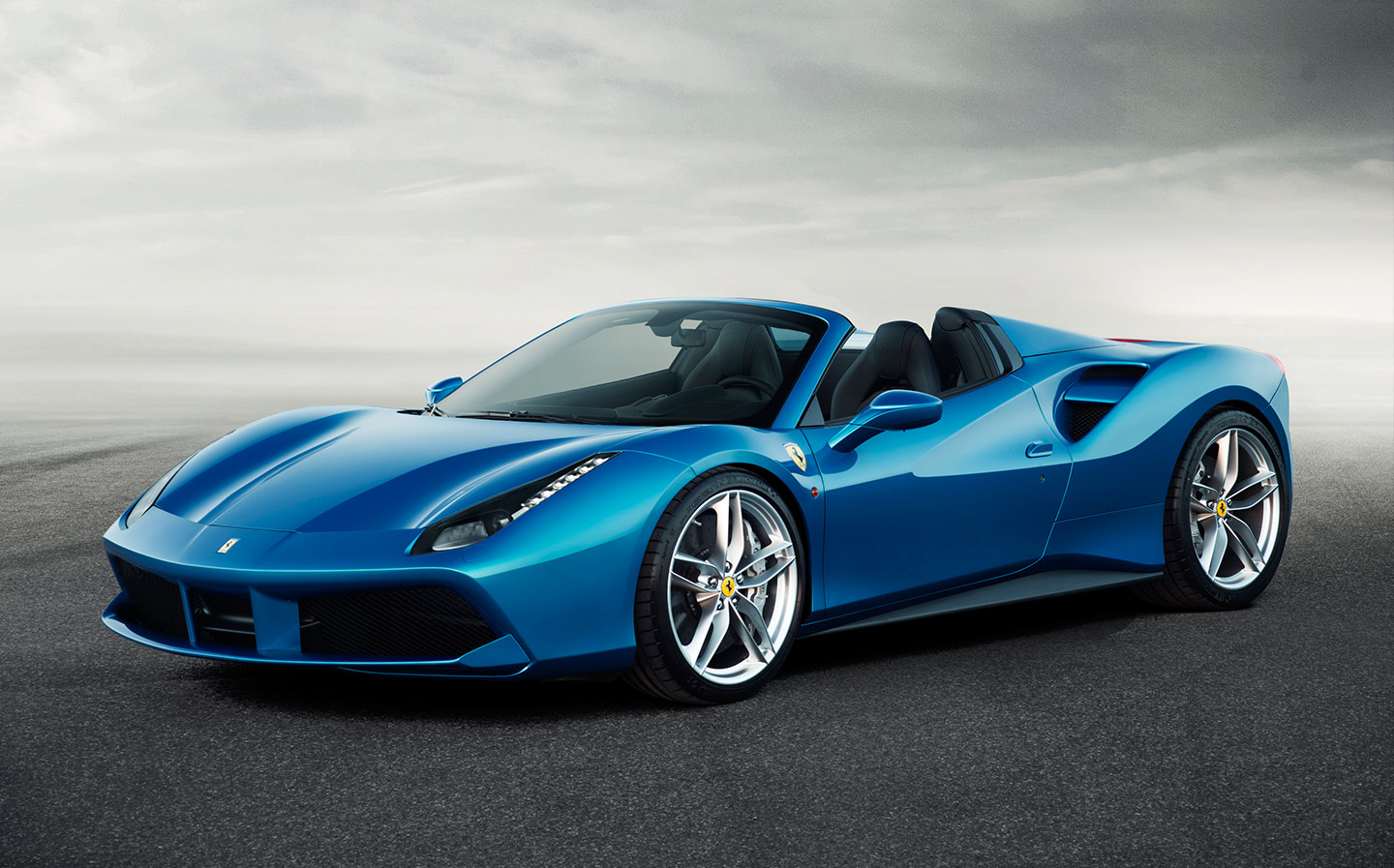 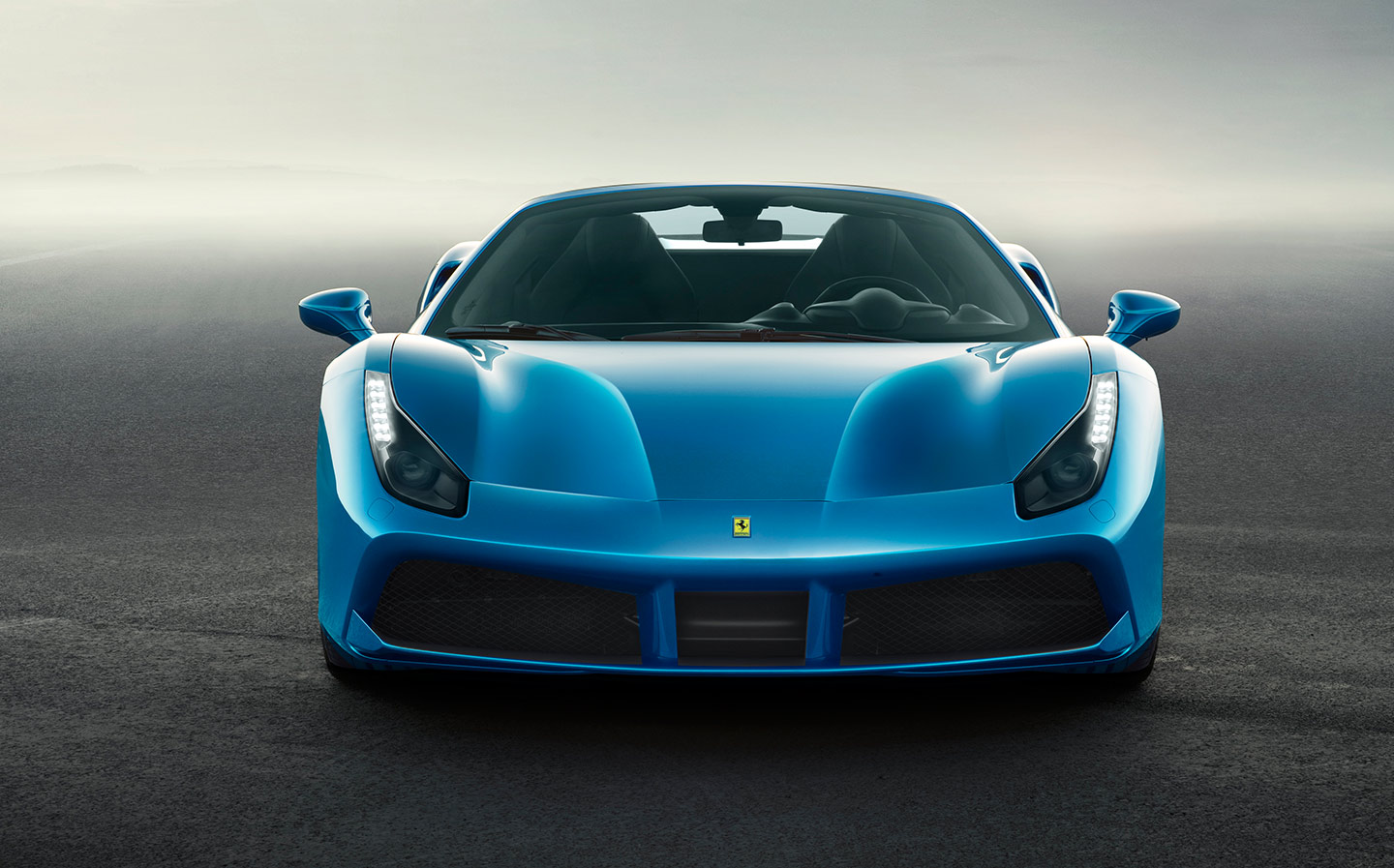 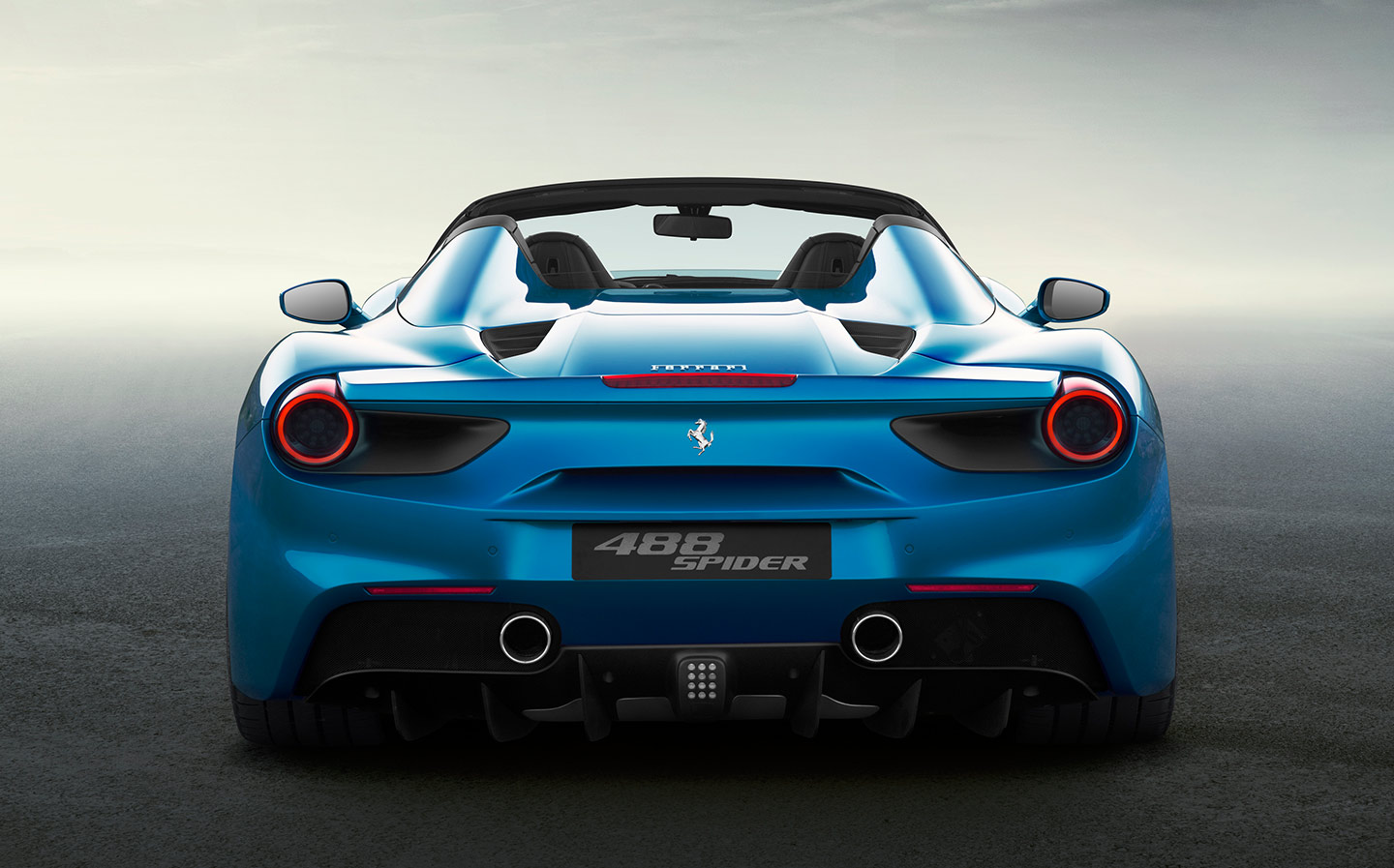 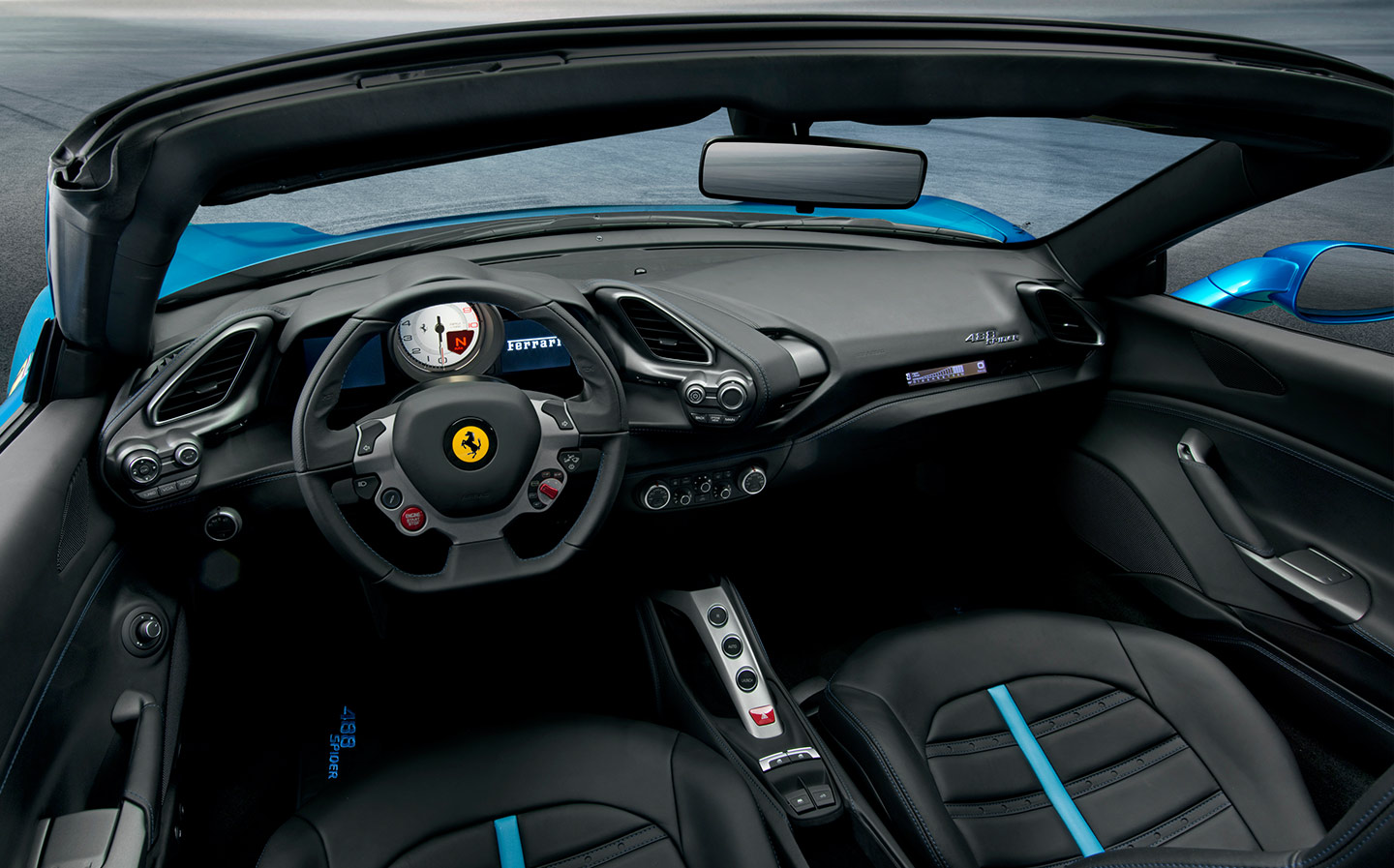 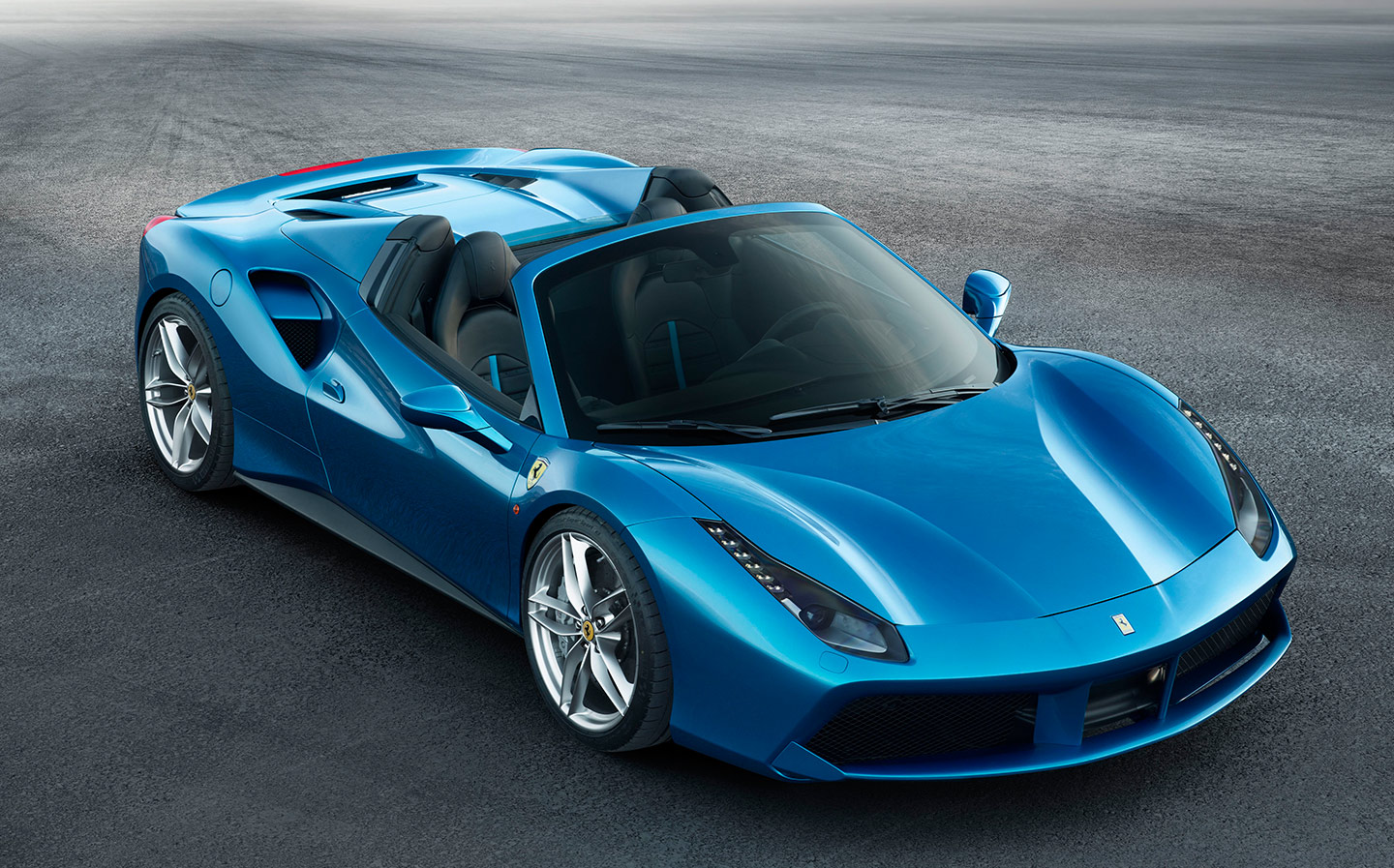 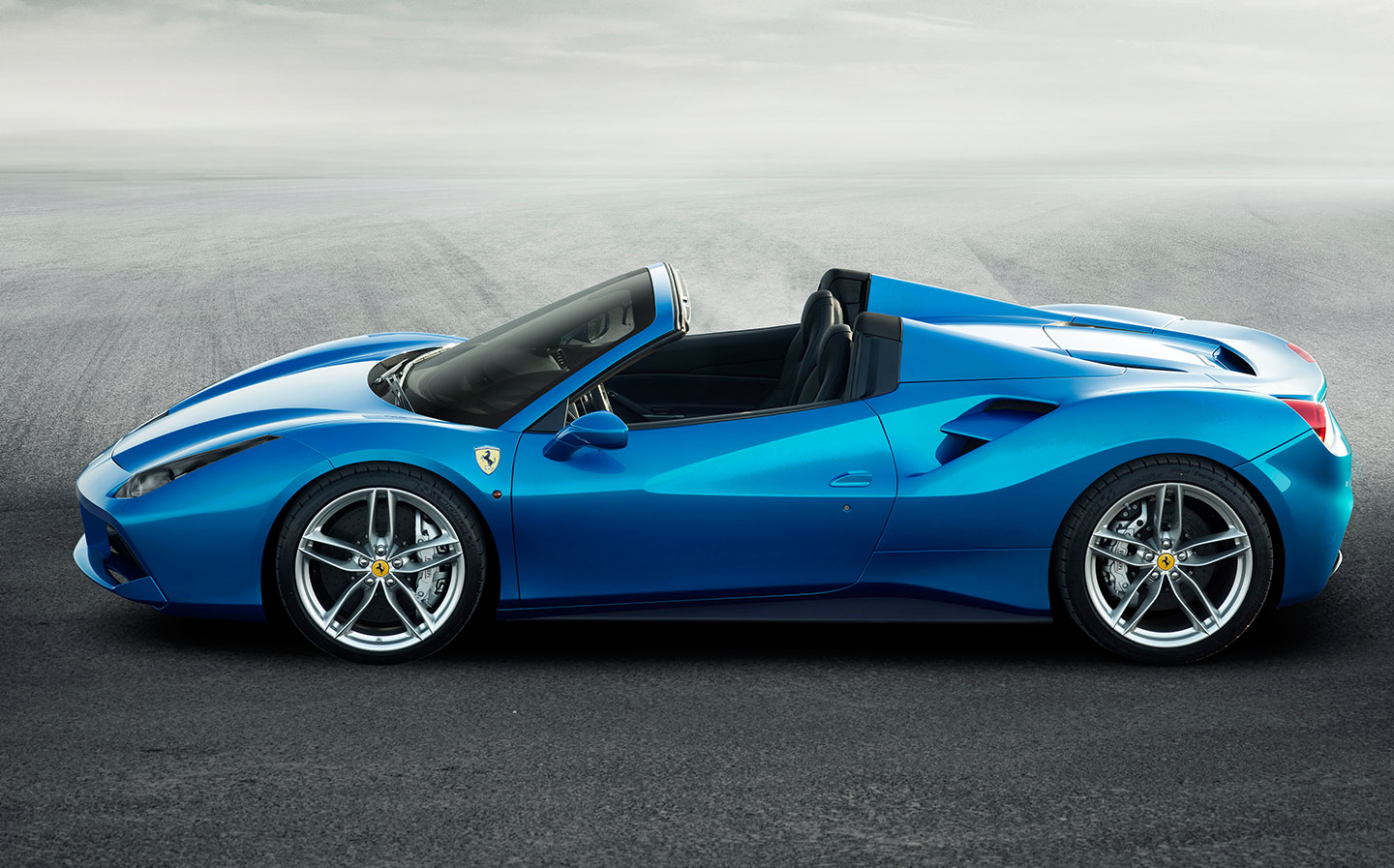 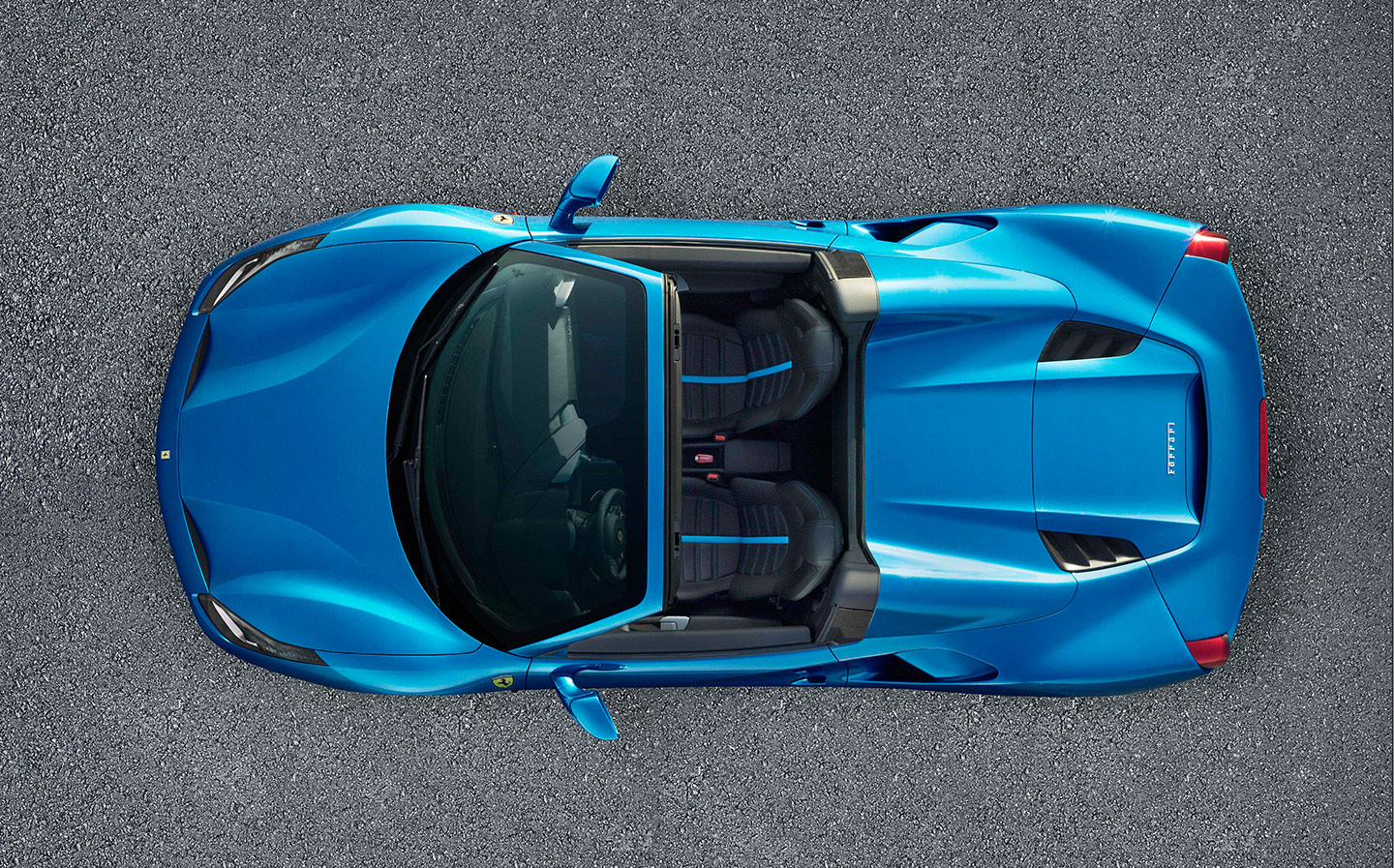 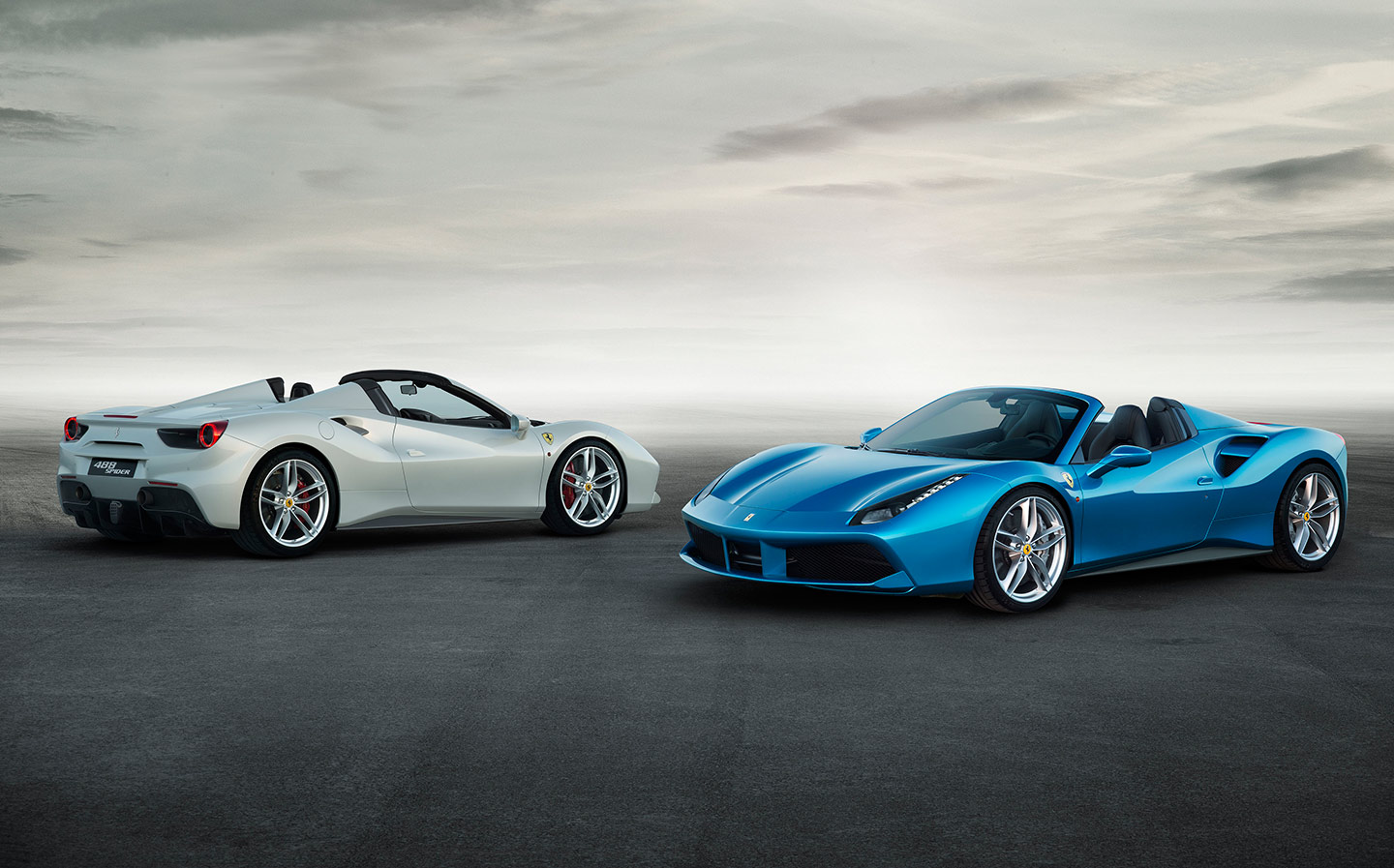 By James May
Share Article
Performance and beauty, just not when I'm behind the wheel
At a glance
Pros
It's a Ferrari and the roof comes off
Guaranteed monster around a track
Mid-range thrust
Cons
I look like a berk driving it
Creaks with the roof up
Not as technologically enlightened as a Honda NSX
Specifications
Cars > Ferrari > 488 Spider

BACK WHEN I was a boy, a car with a removable roof was just about the most exciting thing I could conceive of. More exciting, even, than the Airfix 1/24th scale BF 109 Emil. Imagine it! Being in a car, but also being outside.

I didn’t ride in a convertible until I was 16. My mate Dave was a year older than me and had his licence. More importantly, his trendy mum had a Triumph Spitfire, which he was allowed to borrow. So off we went, hood down, cruising around town, hoping to impress some girls, not realising we were two downy-faced boys in a small convertible and there was nowhere for them to sit even if we’d been successful.

I still loved it, though. So much so that, in my early twenties, I scraped together (that is, borrowed from the bank) enough money for a 1960s Triumph Vitesse drophead, with the six-cylinder engine, you know. It was a product of the British motor industry of the era, so it was crap, but I loved that too; loved it in an era when I would still go out in the car for the sheer joy of it.

View the Ferrari 488s for sale on driving.co.uk

Now look. Look how age has wearied me. In my defence, it was a cold, grey day when I had Ferrari’s 488 Spider, but after driving for a bit I found myself parking in a lay-by and thinking, “Well, I suppose I’d better take the roof off now and try it like that.”

If you’ve thrown the magazine down in a fit of outrage because James May is such a spoilt bastard, well, fair enough. It’s a mid-engined V8 Italian supercar, and it has a pretty good heater. I just no longer feel the urge to take the roof off a car.

There is, in fairness, a lot to commend open-topped cars. You smell things sooner, the seasonal changes resonate more clearly and exposed drivers are more sociable. Accident statistics back this up — if you’re not cocooned in an all-metal box, you’re less inclined to give someone the finger, just as we’re all more confrontational online than in a pub. But it’s a bit blowy, isn’t it?

More importantly, a 53-year-old bloke in an open Ferrari looks like someone who hasn’t resolved the issue we faced in the Spitfire: that is, girls aren’t interested. I also feel that driving a beautiful car is an act of generosity by its owner, allowing other people to see and enjoy its form. It’s like buying a Matisse and hanging it on the outside of your house. Unfortunately, the effect is ruined if you put my face in the picture, not least because, despite my efforts at modernity, I still haven’t embraced the cult of the male moisturiser.

Some years ago, when I passed 45, I came up with a simple rule. As you reach for the button or lever that lowers the roof in a convertible, pause and think to yourself, “Would I do this if I was naked?” Yes, if your skin is as taut as a balloon and your hair cascades from your head like one of Tennyson’s wild cataracts. But if the answer is no, then leave it up.

So, with the roof safely back on, let’s continue. Since I own a Ferrari, and before you point it out, I will confirm that you can never use anything like its full potential on the road. I’m never going to wear my Omega on the moon, either. But knowing that the watch will do all that space stuff is reassuring.

Likewise, for the 488 to be believable, it must be honed to perform as well as possible on Ferrari’s test track, first because that gives it credibility rather than the status of designer frippery, and second because that capability gives the car a certain sensory edge that can be appreciated even when you’re just biffing around on a favourite B-road.

So it alarms me that, with the roof up, there are more than a few creaks coming out of the Spider. I don’t doubt that if I dig deep I will arrive at a disclaimer about torsional rigidity — the traditional bugbear of roofless cars — expressed in an impressive figure involving newton metres and radians, or the like. But it still sounds a bit like HMS Victory doing a gentle lee ho.

What that suggests to me is that the singular purpose of a Ferrari — to be the finest conduit of driving sensations — has been compromised in the interests of looking like a bit of a knob. I can’t tell the precise difference between the convertible and coupé in normal driving. But I know.

I’ve just realised I sound like a bit of a mardy git. It’s a Ferrari, and the roof comes off as a bonus. There. One advantage is that you can open the rear window independently of the roof and soak up some extra engine sound, and that’s nice. But, to return to being mardy again, that’s the only advantage I can find to having this roofless one. I might add that, ceteris paribus, second-hand Ferrari V8 coupés are always worth a bit more than the Spiders.

So, ignoring the roof issue and the odd creak, I found myself very much enjoying the Ferrari 488 Spider. I don’t buy into the widespread grumble that turbocharging has robbed the engine of its character. The reasoning is that the absolute high-rev histrionics of the V8, the part of the rev range where it traditionally reveals the demon in its being, is lost, because ultimately turbochargers restrict breathing at high revs.

But the payoff is that the mid-range is terrific. This is a blindingly responsive car, and the subtle management of torque curves and gear ratios — there are some fabulously baffling graphs to depict this — can at times make the 488 feel almost like a mini LaFerrari, with hidden bucketfuls of thrust available even if you’re a bit slapdash with gear selection, reading the road and all that other helmsman stuff. It’s tremendous fun and it feels very, very special.

But, since I mentioned the Kers-equipped LaFerrari, here comes my final beef. I recently drove the new Honda NSX, with its selectable hybrid drive system. That is a car you can reverse out of your garage and drive through town in quiet all-electric mode. It also gives intelligent electric power to the front wheels, making it a very sophisticated four-wheel-drive supercar, but only in that yawning moment when you need it. The rest of the time it’s just another exciting mid-engined firecracker that just happens to cost about £60,000 less than the 488.

Next to that, my Ferrari, this Ferrari and all other mid-engined sports cars are beginning to feel strangely unenlightened.