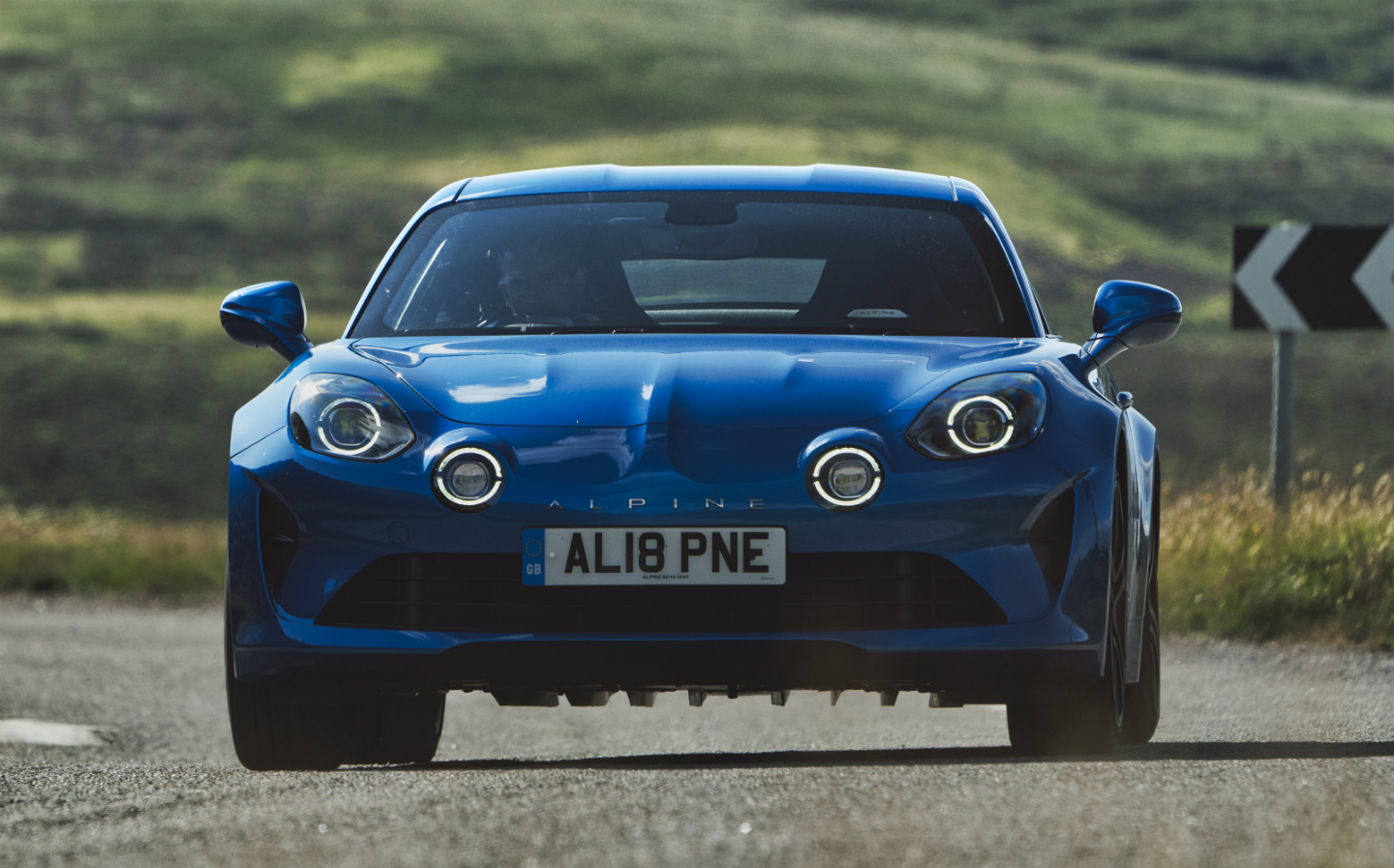 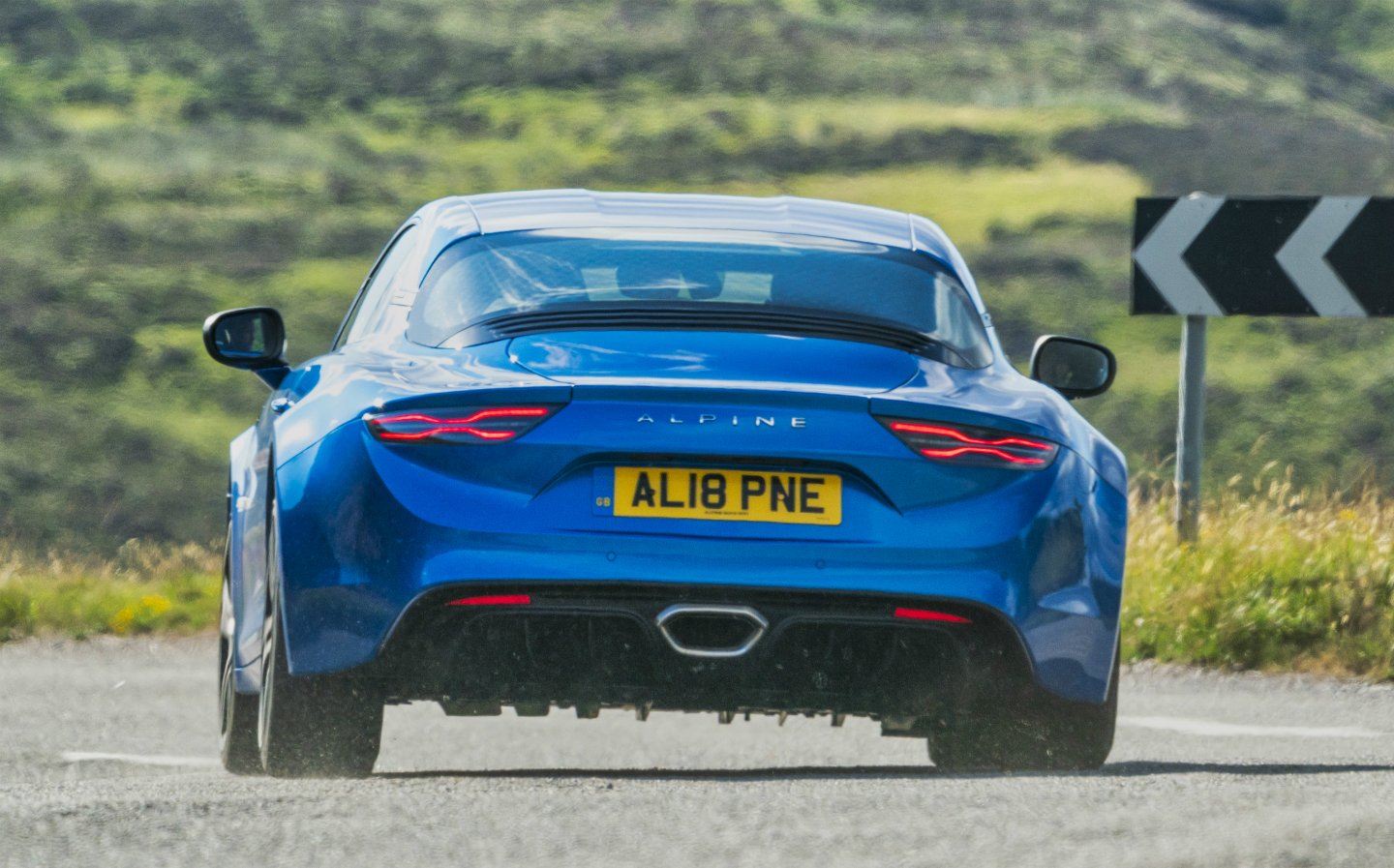 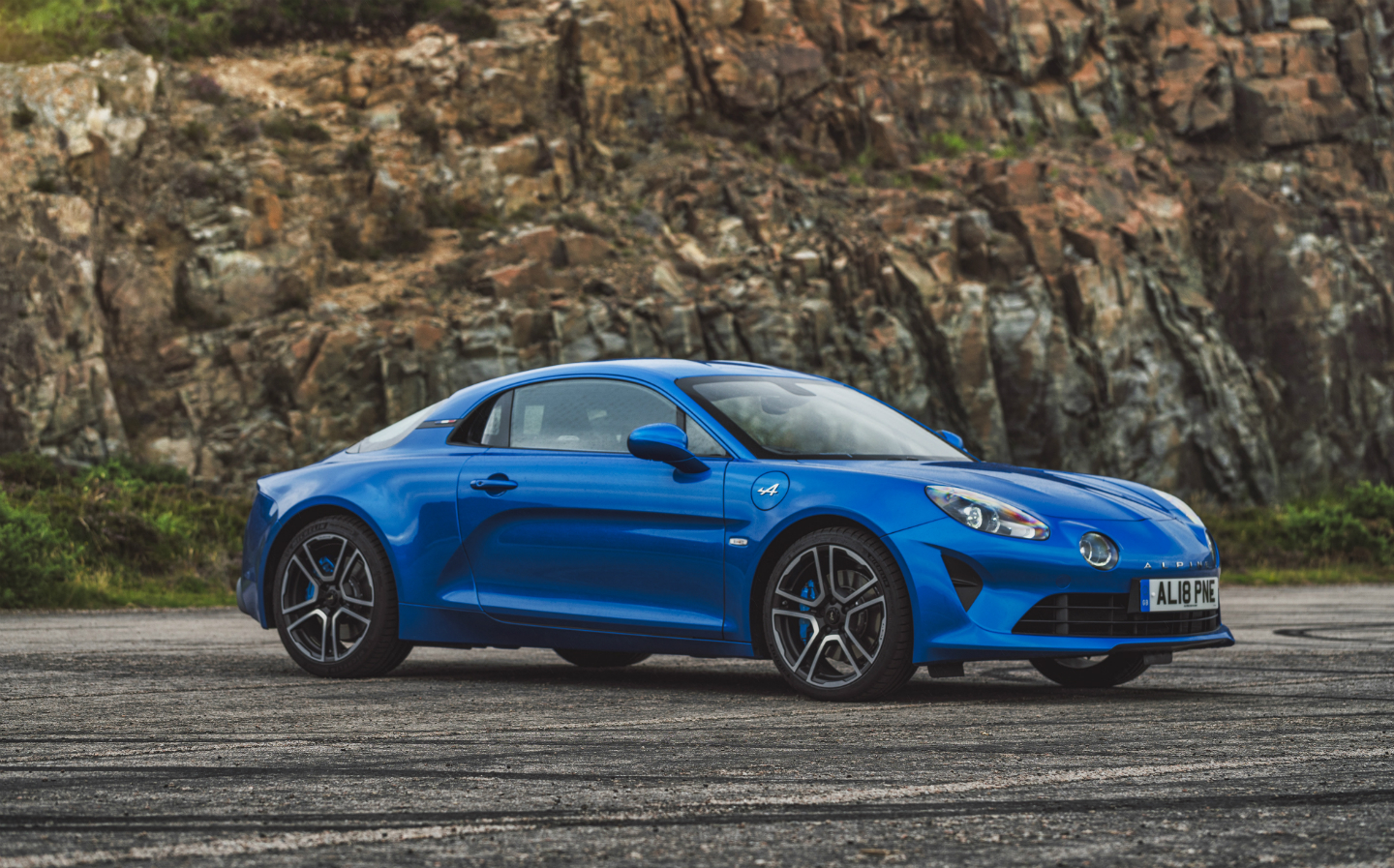 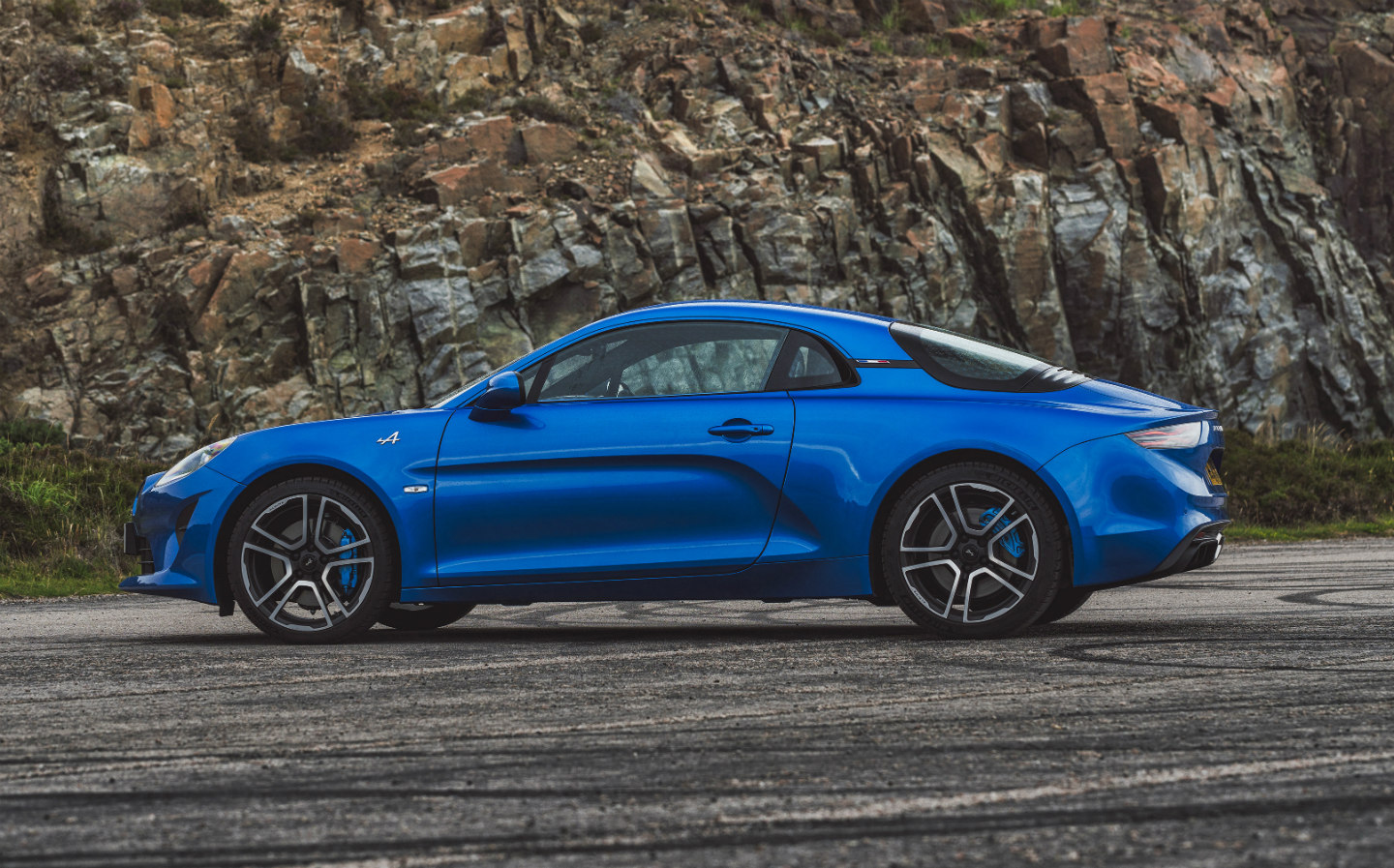 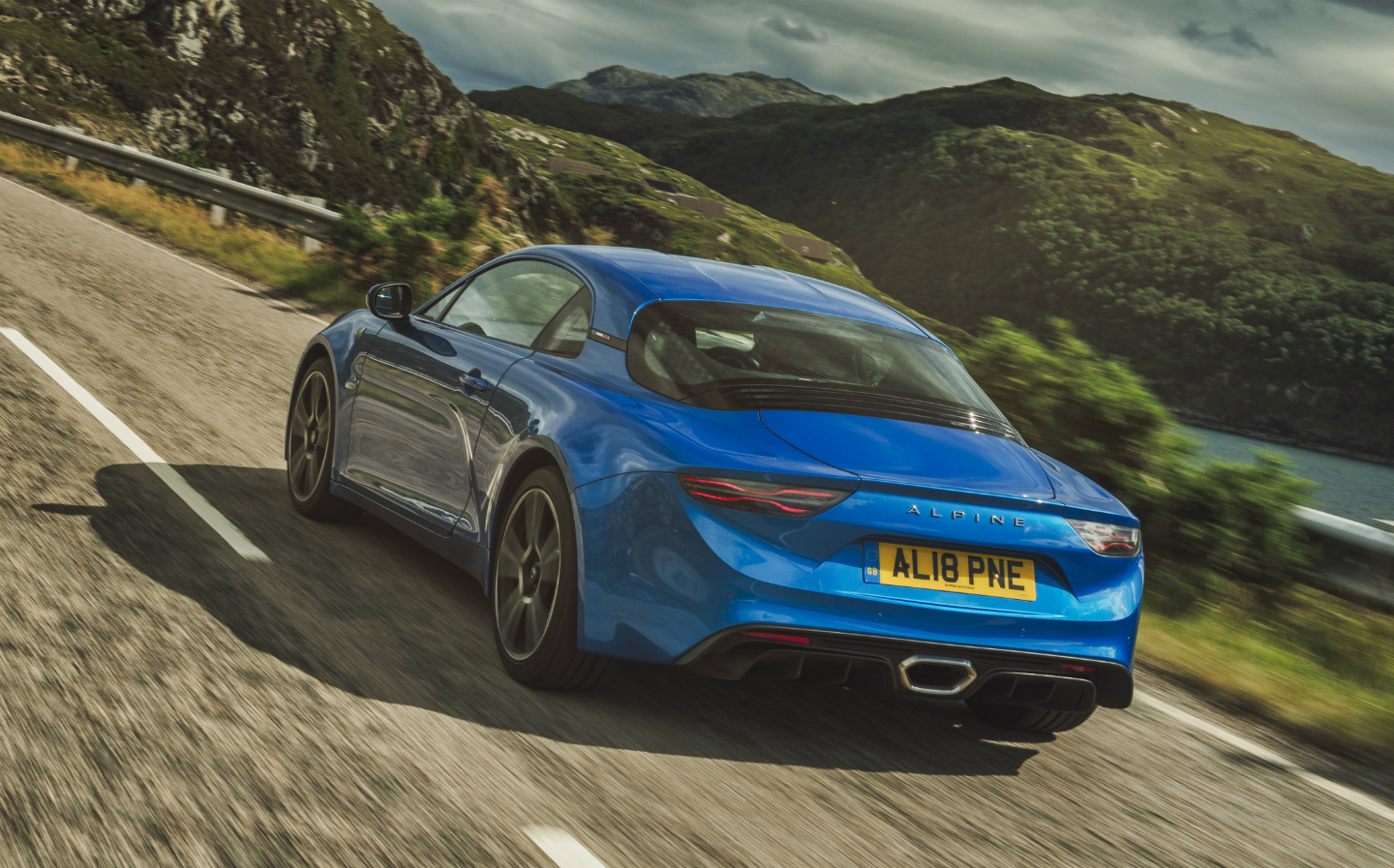 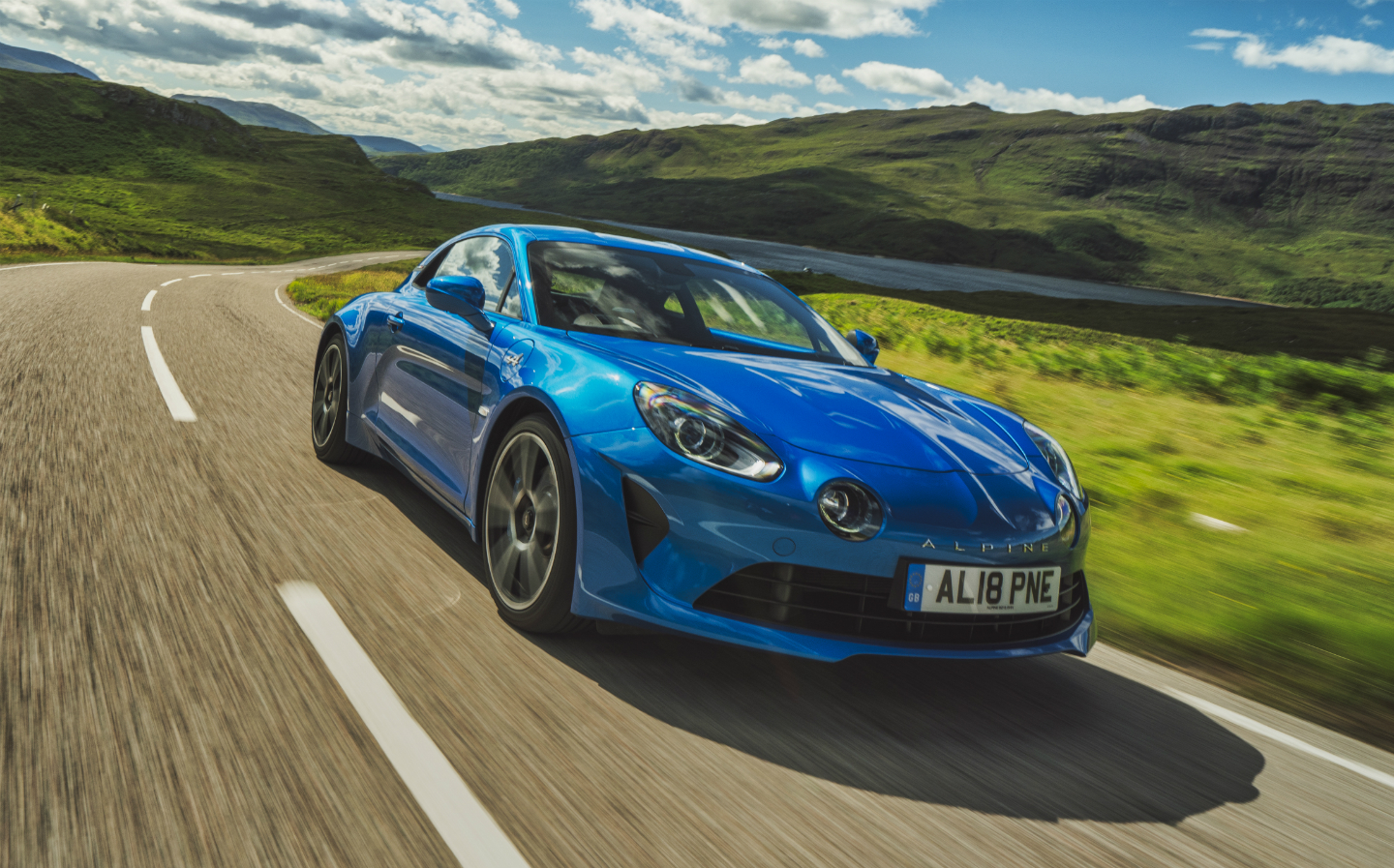 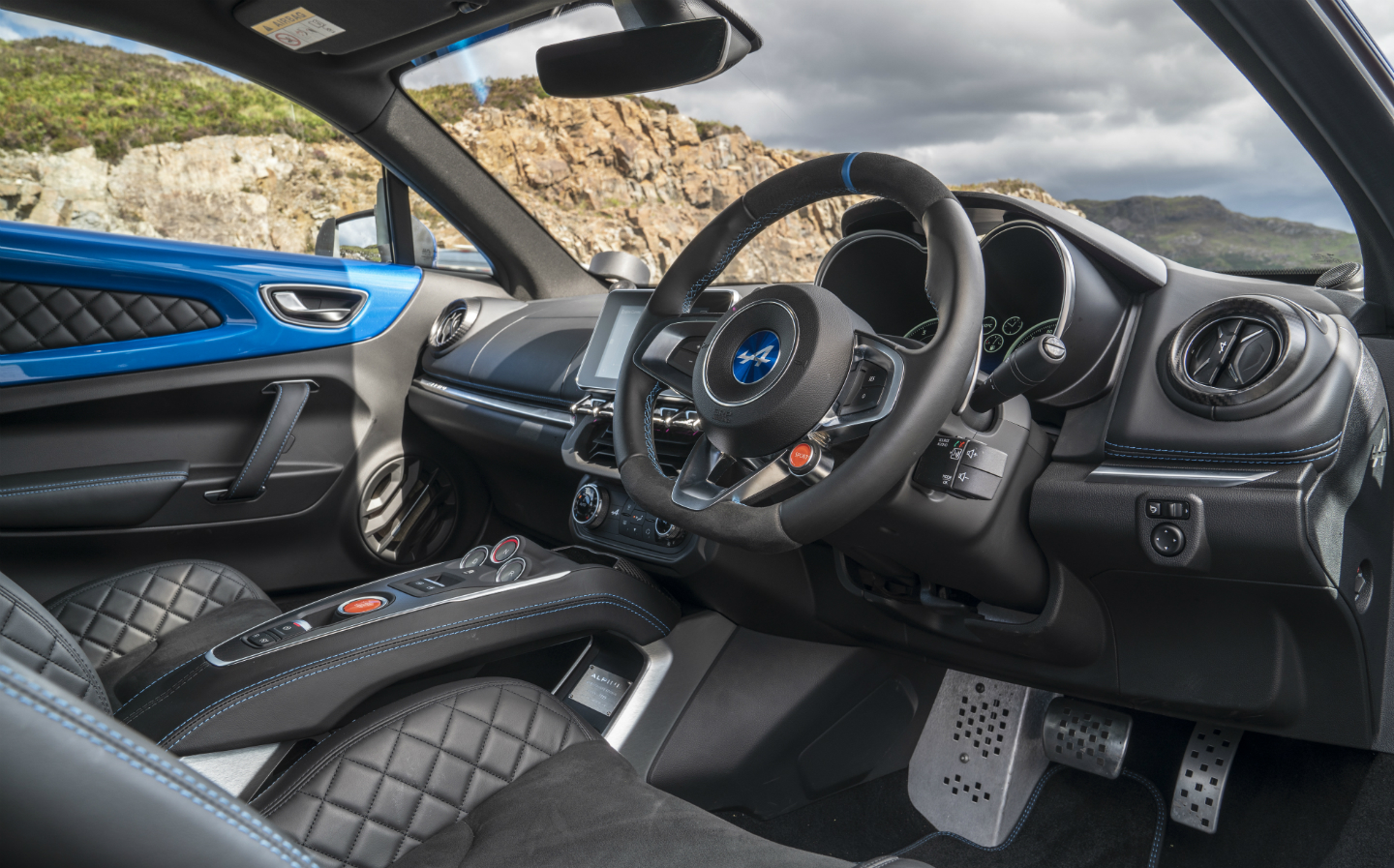 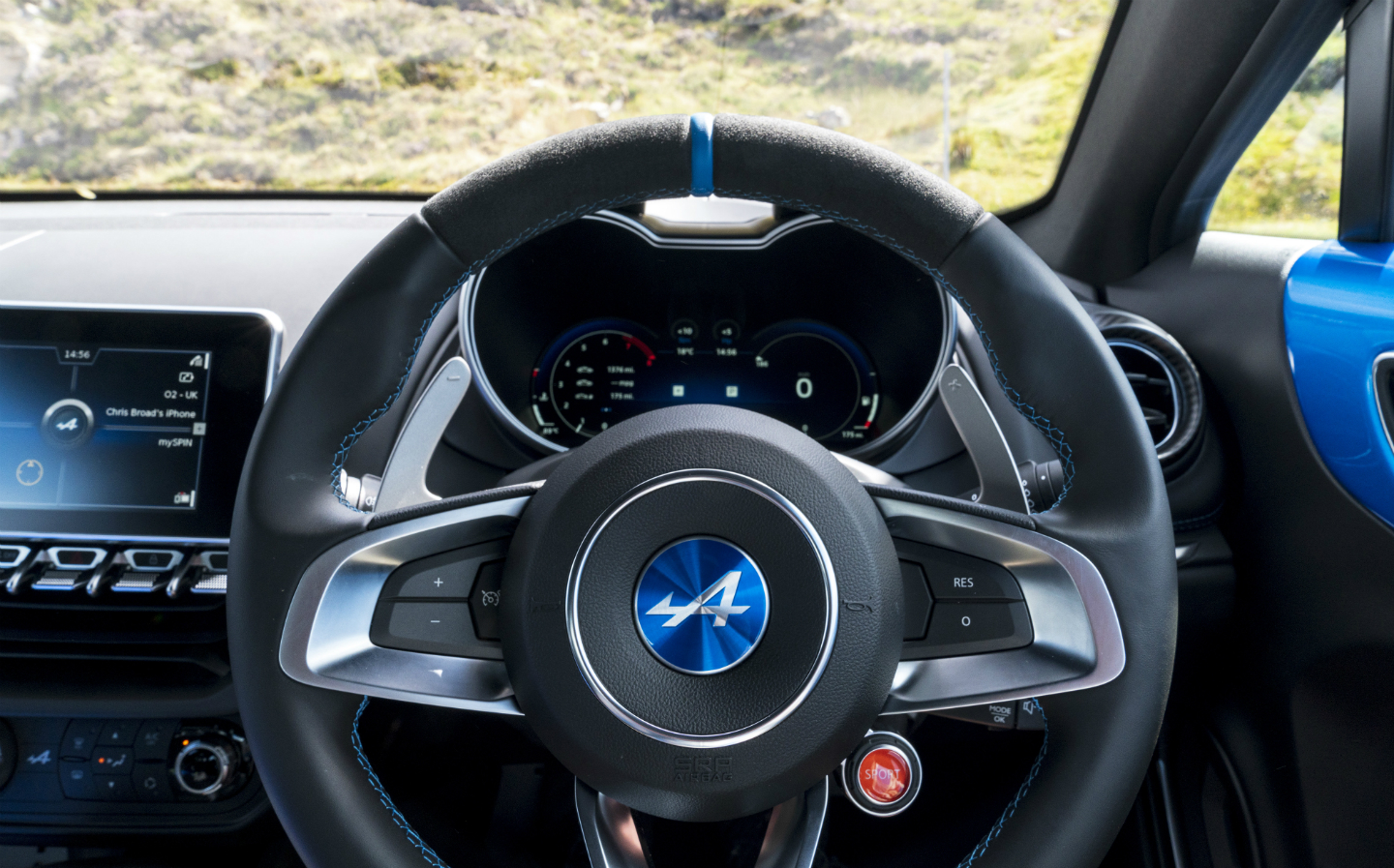 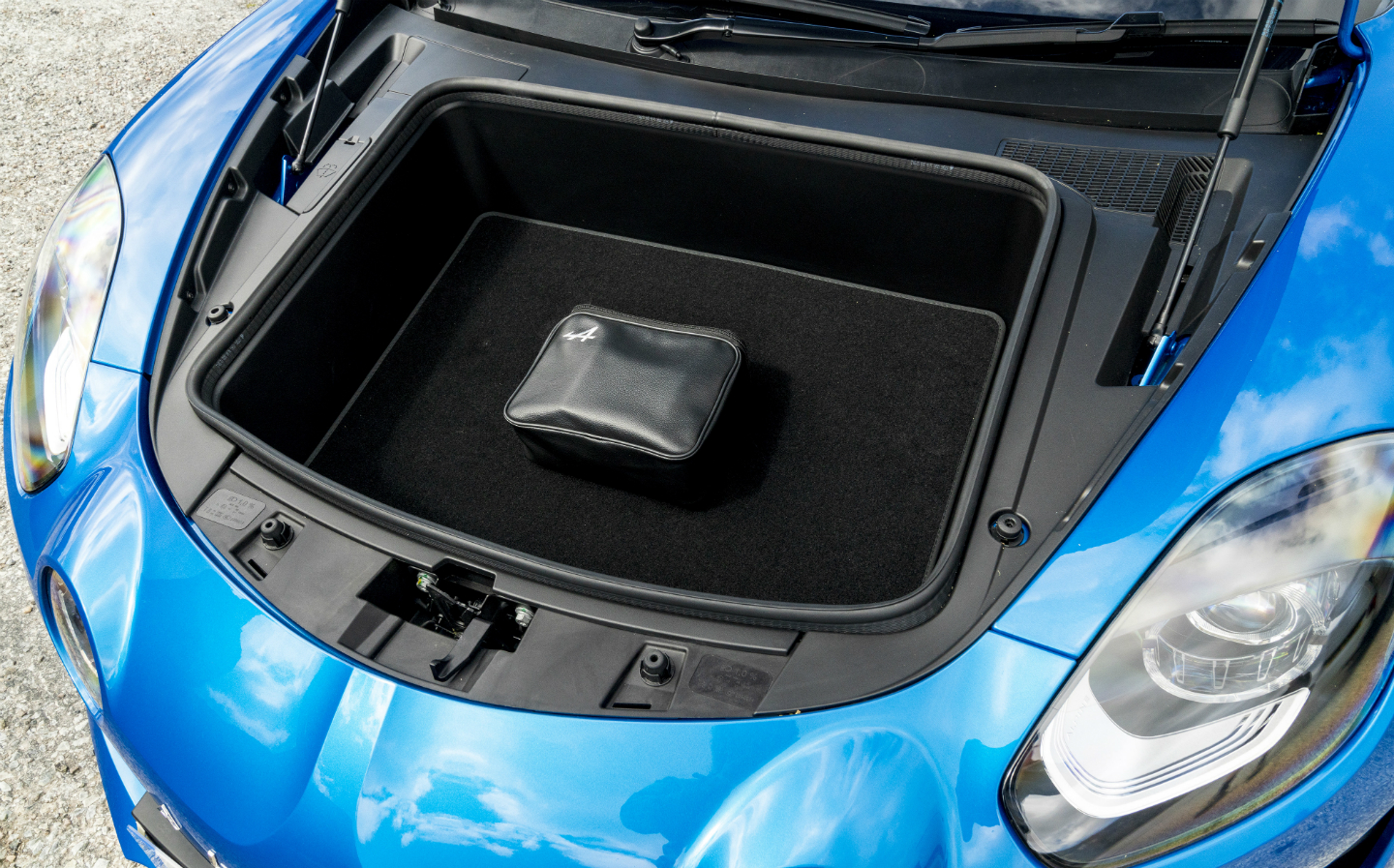 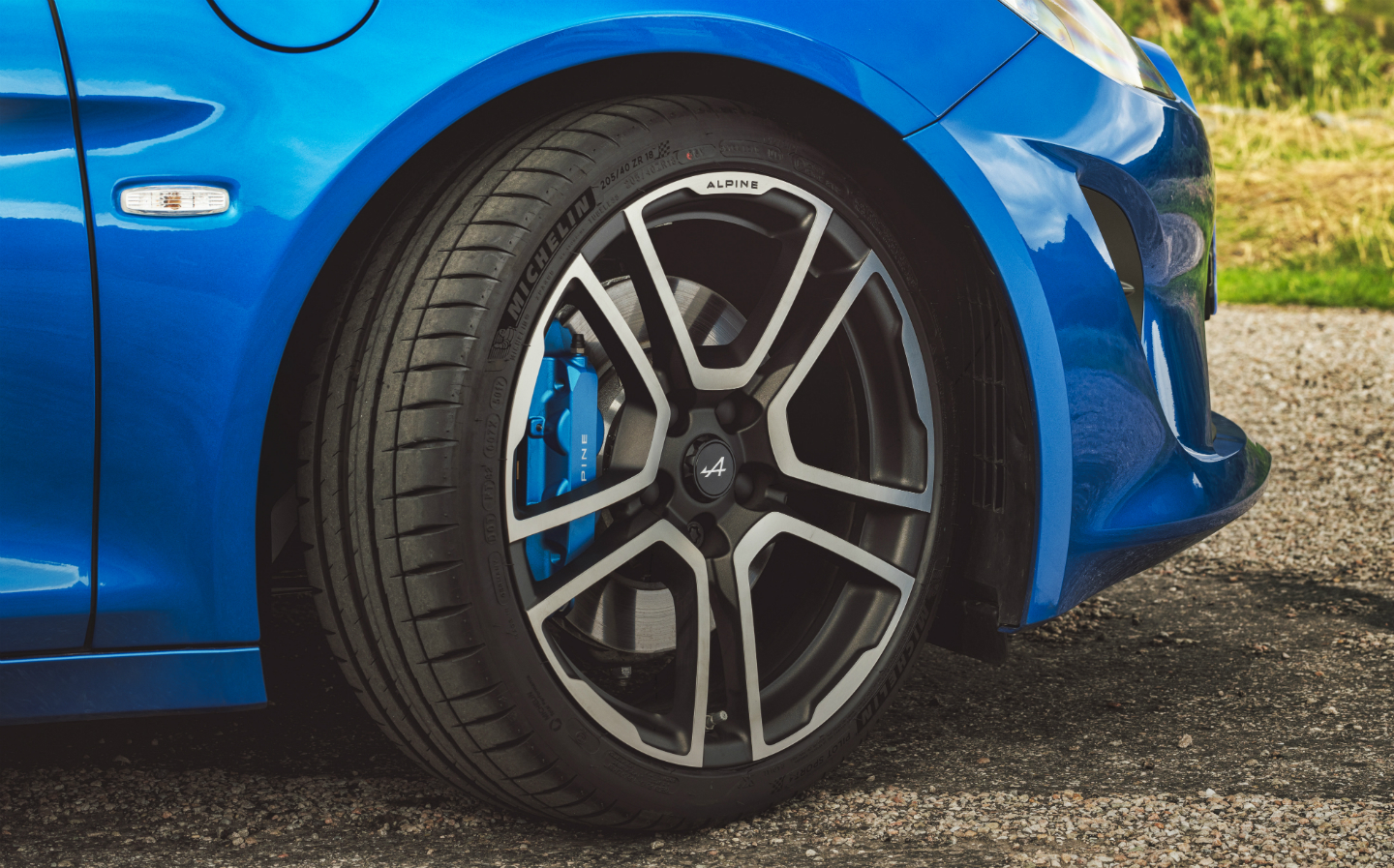 By James May
Share Article
A Ferrari is more exciting, but the Alpine excites more often
At a glance
Pros
Small, light and nimble
Love the gear change indicator
Inexpensive to run
Cons
Not especially beautiful
Not especially powerful
Cayman has a plusher interior
Specifications
Cars > Alpine > A110

EVERY time I open the garage door and see my Alpine A110, I feel a slight frisson of annoyance. I’ve never liked retro styling on modern cars, simply because it never quite works.

The design language of a former era doesn’t square with modern legislative requirements — crashworthiness, mainly — so, like other retro cars such as the Ford Mustang, Fiat 500 and Alfa Romeo 4C, the Alpine looks a bit like a classic car that’s been turned into a novelty computer mouse. Or perhaps a car-shaped comfort blanket for people who can’t move on.

But move on we must. I never drive old cars — by which I mean anything made before this century — because on the whole they are a huge disappointment, except in two regards: they are smaller and lighter than modern equivalents. Famous examples include the Volkswagen Golf, the Porsche 911 and the “entry-level” Rolls-Royce.

While it is true that smallness and lightness in old cars tend to translate into instant death in an accident, when combined with 21st-century engineering these attributes confer remarkable benefits. We’ll come on to those in a minute.

The French-made Alpine is, per se, not a radical idea. It’s a mid-engined, two-seat sports car. The layout has obvious disadvantages, most notably in rear visibility and luggage space, but it immediately renders a car magical because of the way it enhances driving dynamics. In that respect, the Alpine bears comparison to my Ferrari 458 Speciale.

The Ferrari is more beautiful, because the maker has always styled cars for their day, which is why they become classics. It is also a lot more powerful, with almost 600bhp against the French upstart’s 248bhp. The Fezza has a V8, the Alpine a hot-hatch four-pot. The 458 is naturally aspirated, but the Alpine is turbocharged, which immediately elicits cries of despair from those people who can’t move on.

More important than any of this is that the Alpine is almost 300kg lighter than the Ferrari, which in layman’s terms is like removing a Harley-Davidson Fat Boy from the boot.

It’s a sad fact that most current supercars are too wide to be enjoyed in the environment where they should be at their best, which is a winding back road

It’s interesting to note that the weight difference between the Alpine and the Ferrari is greater than the weight saving achieved by the 458 Speciale over the standard 458 Italia, which just goes to show that a truly lightweight car has to be designed that way from the start. It can’t be properly achieved with a few changes of material and throwing away the nice bits of interior trim.

This brings us to the optional physics bit.

Most people accept that low weight improves acceleration and fuel economy. What is less well understood is that the effects of excess weight are compounded in corners, which is where we seek our fun.

The best way I’ve devised for explaining all this is to imagine you’re holding a ladder, horizontally, at a point in the middle, and you try to turn round, as if you were in a rubbish Laurel and Hardy sketch and the far end of the ladder were going to clout the buttocks of a lady bending over to smell a flower.

Instinct tells you that it’s harder to turn around with a heavy old wooden ladder than it is with a lightweight aluminium one. This is because of so-called rotational inertia, which can be thought of as the reluctance of things to turn. Reducing the car’s weight is like swapping the wooden ladder for an aluminium one.

I could go on — and shall. Imagine you hang a large pot of paint at each end of your aluminium ladder. It becomes harder to turn again. But now hang the same two pots of paint in the middle, where your hand is holding the ladder. Now it’s easier to turn. The combined ladder and paint pots still weigh the same, but you are now feeling the benefits of mass centralisation, which is why the mid-engined layout exists: it moves the heavy bits (engine and occupants) towards the centre of the ladder, which is now a sports car and more wieldy as a result.

Having achieved the low weight, we can now, to bastardise the famous Colin Chapman quote, add smallness. The Alpine is almost 15½in shorter than the Ferrari and, more tellingly (since the width of the road is the issue, not the length), 6in narrower.

It’s a sad fact that most current supercars are too wide to be enjoyed in the environment where they should be at their best, which is a winding back road. Too many times the reverie of Ferrari ownership has been spoilt by having to wince my way between a medieval stone wall and an oncoming lorry.

But 6in is half a school ruler’s worth of extra space, and it’s all in the middle of the road, because you still drive with your nearside wheels in the same place relative to the kerb. The observed effect of the Alpine’s compactness is that the road is bigger, rather in the way that Richard Hammond has a larger house than most of us because he’s smaller.

From here on, the benefits of the Alpine’s ruthless size and weight paring come thick and fast. Less weight means a smaller engine, which takes up less space, aiding compactness. The tyres can now be more modest, which improves steering feel and makes the loss of grip more progressive. The brakes don’t need to be too big, so unsprung weight is reduced and the ride is improved. The fuel bills plummet and so do insurance costs. It goes on and on.

The net result, as they say in the army, is a genuinely delightful car. It feels faster than it really is, because it’s so responsive. The interior is not as plush as a Porsche Cayman’s, but it avoids that depressing track-special aura felt in cars where weight-saving has been a desperate measure. It’s fully equipped and connected.

It’s also good humoured, despite being French and therefore a bit philosophical. My favourite feature is the digital gear display, which at night is anointed with tiny stars. As you change gears, the new numbers rush forward from deep space, like the Starship Enterprise coming out of warp drive.

Look, the 458 Speciale will mince the A110 round a circuit. Its top speed and 0 to 62mph figures are better. But the real world of blind bends, unknown roads and stuff coming the other way reminds us that cars are not spreadsheets; they are performative events, like music.

Of course the 458 is more magical — it’s a special-edition Ferrari, after all. It’s ultimately more exciting. But the Alpine is exciting more of the time.