By Richard Bremner
Share Article
Novel, and decent value, but this isn’t enough to overcome a long list of deficiencies
Pros
Door arrangement more sensible than it looks
Unusual styling
Good value
Cons
Drives like a car from the previous decade
Packaging less clever than it looks
It's slow
Cars > Hyundai > Veloster 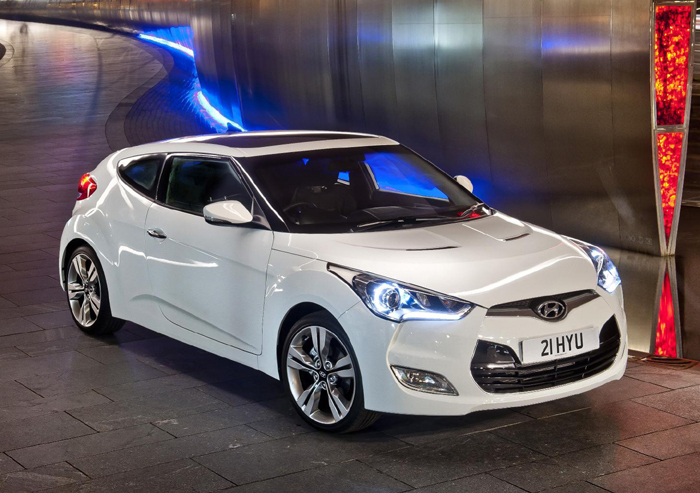 What is the Hyundai Veloster?

Fancy a car with two doors on one side and one on the other? Probably not, but now there are two models offering this bizarre body configuration: the Mini Clubman estate and this Veloster coupé. Hyundai calls it a 1+2 door layout; the pair are sensibly located on the passenger side of the car where you can use them from the pavement. The driver gets the single door and with it a reminder that this is more sporty coupé than practical hatchback. For it’s coupés that the Veloster is most logically compared with, such as the Renault Mégane, Vauxhall Astra GTC and VW Scirocco, all of which also offer two (often slightly cramped) rear seats.

Search for and buy a used Hyundai Veloster

Like all coupés, the Veloster is about cutting a dash, but your eye is more likely to be snagged by its curious door configuration than knockout styling.

There are six non-turbo Velosters on offer (the Veloster Turbo is reviewed separately), all with the same disappointingly modest 138bhp 1.6-litre engine and two of them with a paddle-shift automatic gearbox. Pick of the bunch is the cheapest version, which is still well kitted out. The Veloster was introduced here at the same time as Hyundai’s i30 hatchback, and the differences are striking. Whereas the i30 is thoroughly up to date, from cabin quality to refinement, the Veloster feels the product of a previous generation. That it’s not as civilised as the hatch matters a little less in a sporting car (though only a little); more disappointing is that it has less roadholding and too little steering feel to warn you of the fact. On the other hand, it rolls little and responds as swiftly to your wheel-swivellings as a good sporty car should. 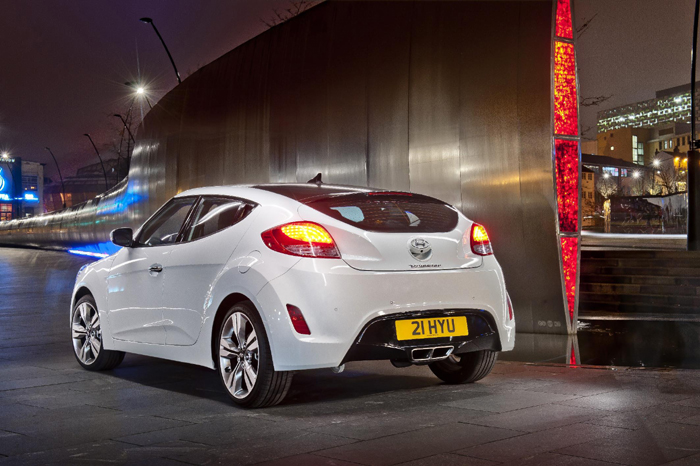 Unsurprisingly the engine needs to be worked hard to provide a semblance of sporting performance, but really it’s no better than brisk, leading you to conclude that the Veloster’s two-door flank is the more truthful expression of its character.

The Veloster’s interior is modern enough, but there are no funky eccentricities to complement its odd door arrangement. You can brighten it up by ordering the Sport, with red leather upholstery and panoramic glass roof, but if you’re over 6ft the glazing will sit too close.

Cranial clearance is still more of a problem in the rear, where the steep-sloping tailgate crowds in on anyone over 5ft 6in. A shame, because the rear seats are otherwise spacious, and it’s easy to get to them with that extra door. 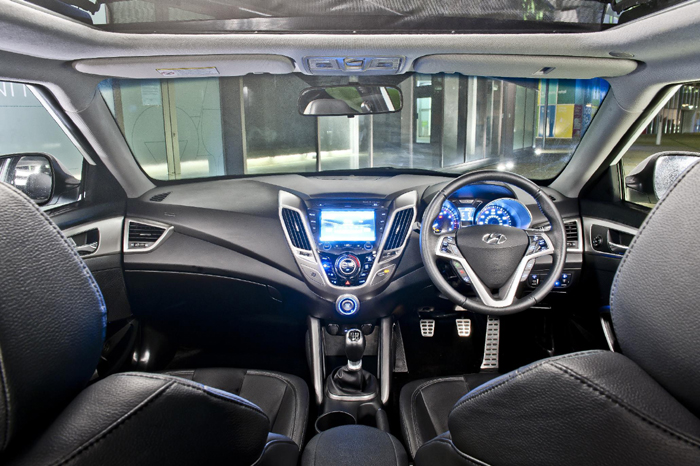 The driver sits comfortably behind a dashboard rendered sophisticated by its (slightly fiddly) infotainment screen. But the sophistication evaporates under the swelling concert of engine, wind and road roar, the often lumpy ride providing unfortunate support.

The Veloster is an interesting car undermined by an underpowered engine, too little refinement and questionable packaging. VW’s Scirocco is a vastly superior four-seat coupé.

Audi A5 Sportback (click for used prices on driving.co.uk)