By Guy Martin
Share Article
The only car you'll ever need — even though it's a van
Pros
More practical than my Transit Custom
123bhp 2-litre turbodiesel pulls from very low revs
Tough as boots; lasts forever
Cons
Maybe not as posh as a Transporter
Not the quickest van, either
Some weirdos might be embarrassed to be seen driving one
Cars > null 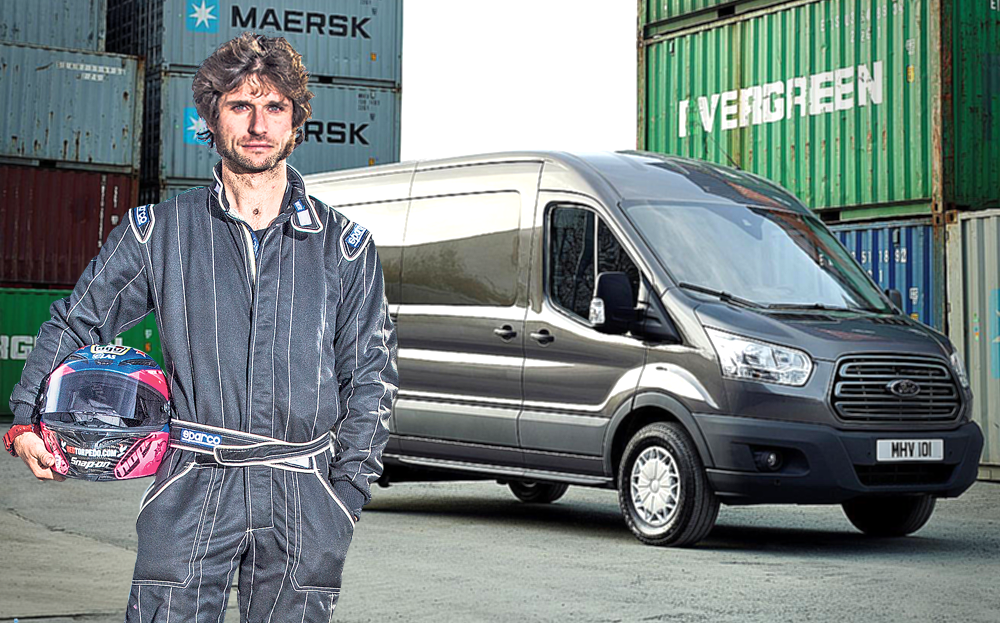 ON THE ferry to Northern Ireland, I sat down with my copy of Irvine Welsh’s Trainspotting and a cup of tea. Everything felt better than the last time I was on a boat on the Irish Sea. A month earlier, when I last made the crossing, I was on my way back from Northern Ireland five days after headbutting the road at 130mph and properly spannering myself.

View the used Ford Transit vans for sale on Driving.co.uk

I had broken five vertebrae, five ribs and two metacarpals in my right hand. I had just had my spine rodded together, leaving an 18in scar up my back and seven of my vertebrae bolted together because two of the broken vertebrae were, the doctor at Belfast’s Royal Victoria Hospital explained, unstable. As soon as they would let me, I checked myself out of hospital, less than four days after the operations on my back and hand. I lay down in the back of my dad’s camper van for the journey back home to Lincolnshire.

I’d crashed the TAS BMW S 1000 RR superbike while leading the last lap of the Dundrod 150 race — part of the Ulster Grand Prix bike week — which is held on the fastest motorcycle race circuit in the world. But that was a month earlier and I’d already been back at work for a couple of weeks, albeit not doing anything too heavy.

It’s never a bother going back to Ireland — either side of the border. I like the place and the people and I was heading there as a guest of TrustFord to be part of a big go-kart race for children at the Hillsborough International Oyster festival, in Co Down.

“Less than four days after I had my spine rodded together, leaving an 18in scar up my back, I checked myself out of hospital. I lay down in the back of my dad’s camper van for the journey back home to Lincolnshire”

They actually called it a soapbox derby, but that sounds too American to me, so it’s a go-kart race as far as I’m concerned. Ford got me involved because I hold the go-kart world land-speed record — 85.6mph — set at the back end of last year down Mont Ventoux in Provence.

I had the idea of having a go in the record-breaking go-kart at the festival, but I’d crashed it trying to improve on the record the day I set it and bent the Sheffield Hallam University-designed go-kart — they call it a “gravity racer” — out of shape.

After injuring myself at the Ulster Grand Prix, I hadn’t had time to fix it, so I just loaded the wreckage — still very good-looking carbon-fibre wreckage — in the back of a Ford Transit and drove over to put it on display and watch the kids race their own machines. 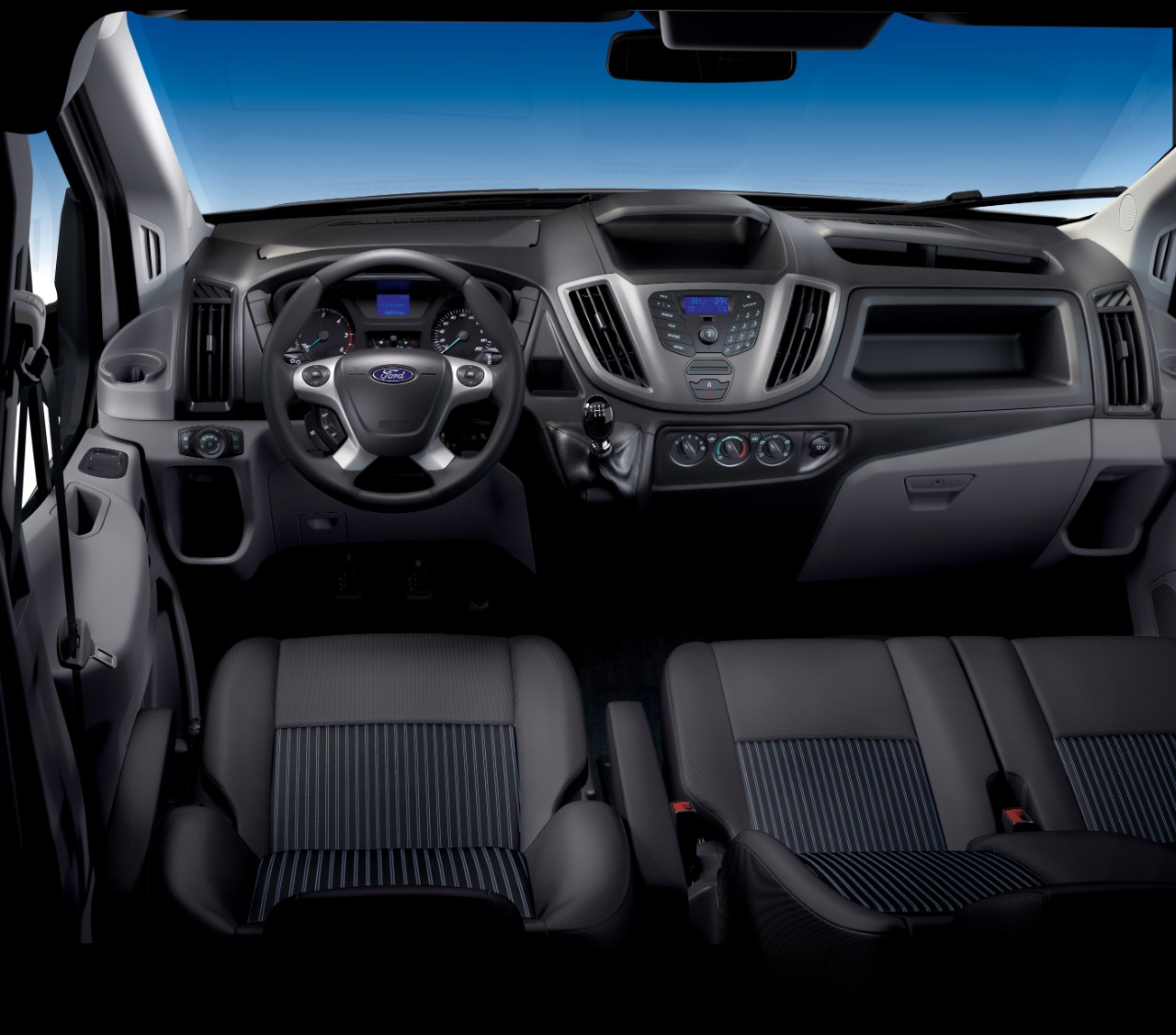 The record-breaking go-kart is a fair size and it wouldn’t fit in the back of my Transit Custom, so I ended up borrowing a proper Transit — a van.

In the Transit range now is the Ford Fiesta-sized Courier, the Connect, which is about as big as a Citroën Berlingo, the Custom — I have the Sport version of this model — and the proper full-size Transit van.

The Custom is still recognisable as a Transit; it looks nearly the same as the van but it is deceptively different. It has a shorter wheelbase and lower roof and is narrower. It’s still a proper van and I’ve taken four motorbikes in the back and three of us in the front to Spain and back in mine.

I like Transits but I haven’t always had them. I had Vauxhall Astra vans for a while because they were so good on diesel. Then the company stopped putting the Isuzu engine in them, and I had one with the new engine and it broke down something like eight times in a year.

I can’t see a downside to a Transit: I’ve slept in mine probably 50 times too. Why would you want anything else?

Then I bought a Volkswagen Transporter Sportline when it had just come out. It went like hell, but wasn’t very good on diesel and it looked as though it had been crashed into Halfords, because it was covered in big polished bars under the sills. This was before they became trendy.

Now a certain kind of person has a Transporter, with fake Hawaiian flowers hanging from the rear-view mirror and Fox Racing or Cannondale stickers on the bottom right-hand side of the back door. Why do they feel they all have to do that? What is going on in their heads? I want to know.

I owned the Volkswagen for 18 months and it was becoming unreliable, even with only 60,000 miles on it. When I was offered fair money for it, I sold it and started using the work’s poverty-spec Transit until I could find something decent. The Ford had keep-fit — wind up — windows, only 84bhp and a five-speed gearbox, so I had gone from the absolute Carlos Fandango Volkswagen that I’d bought for £25,000 as a former demonstration model to this bottom-of-the-range Trannie. But I preferred to drive the Ford.

I kept that works van for 70,000 more miles until I was done for three bald tyres (I was trying to get 100,000 miles out of the original ones, but that’s another story). From that time on, I’ve had nothing but Transits. Now I’m planning to trade from my Custom Sport to the standard van. 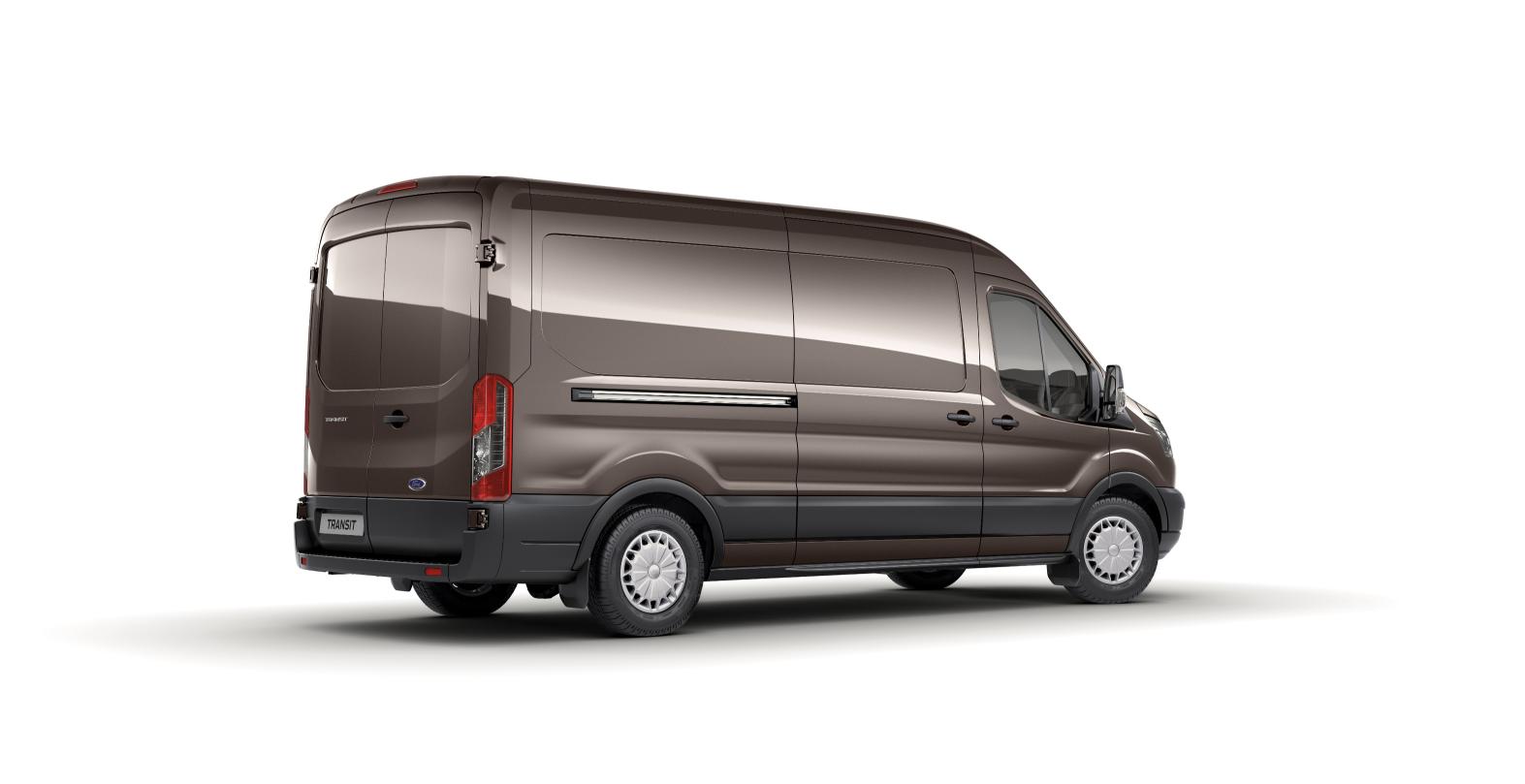 It’s less powerful than mine — 123bhp compared with 153bhp — but it’s nicer to drive because it’s less peaky. To increase the horsepower, Ford uses more pressure, from a bigger turbo, which means the higher-horsepower engines don’t go as well at lower revs. The 123bhp unit fitted with the smaller turbo pulls from tickover, and once you’re going you can leave it in top gear all day.

The van is more practical than the Custom. There are loads of tie-down points in the back — more than you need. The passenger bench seat hinges up to give you storage underneath — like in a VW Transporter — and there is a flap, held up with magnets, that you can get to from the inside of the back to put all your tie-downs and jump-start pack under the passenger seat to tidy them away. There is good lighting in the back, too.

A certain kind of person has a VW Transporter, with Fox Racing or Cannondale stickers on the bottom right-hand side of the back door. Why do they feel they all have to do that? What is going on in their heads?

If someone is reading this and thinking they’d like a Transit but can’t justify a new one — perhaps they want one to take their push-bikes out every weekend — you could buy one with 200,000 miles on it. Have a good look around it, make sure it’s just passed its MoT and you’ll be all right. Mine has done 100,000 miles and it feels brand new.

I can’t see a downside to a Transit: there’s no point in me having anything else. You can get it with a second row of seats, which are removable, and a window in the side and use it as a family car. I’ve slept in mine probably 50 times too. Why would you want anything else, unless you’re embarrassed to be seen driving one? And I’m not. 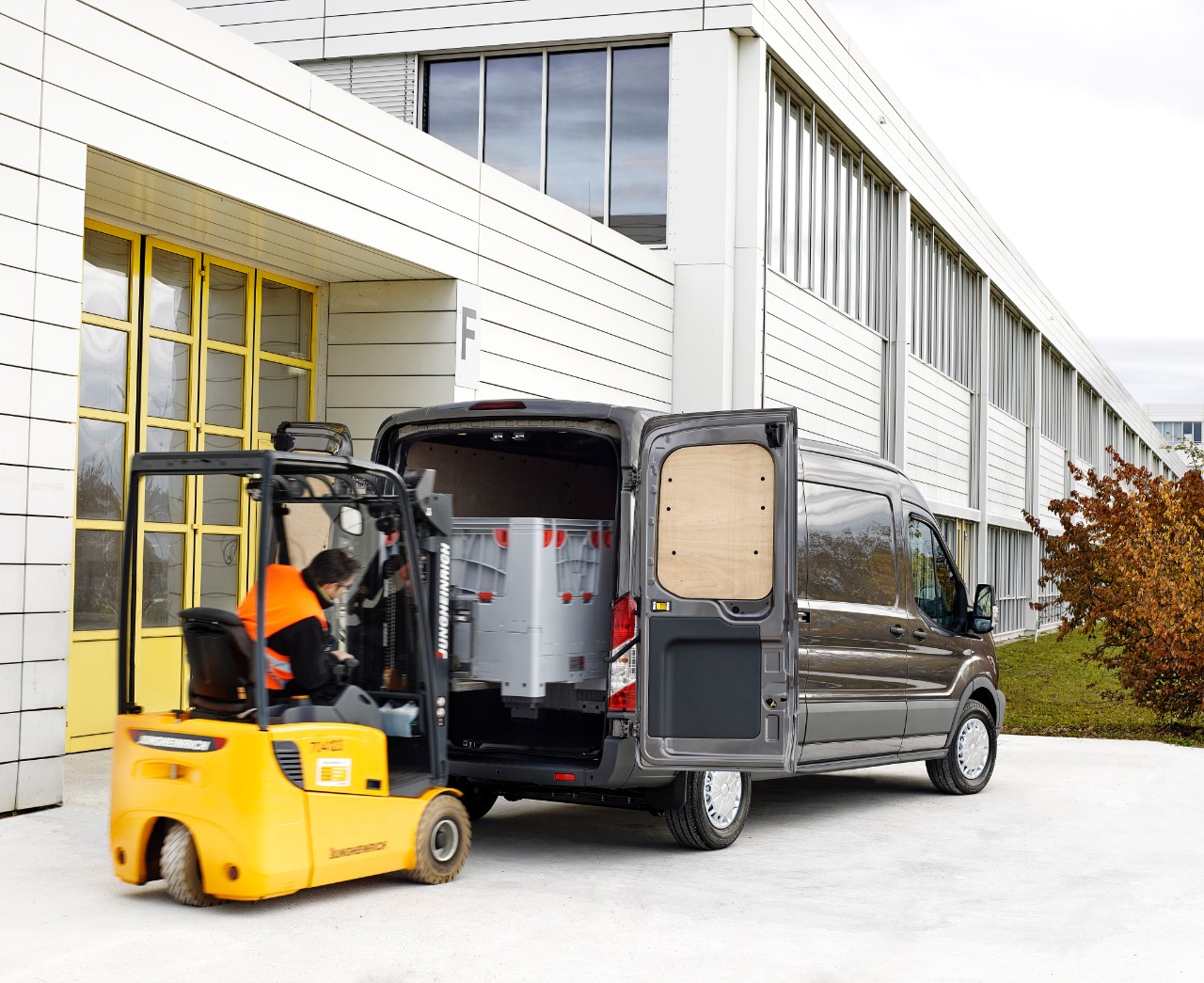 Back in Northern Ireland there were some trick machines at the go-kart race and it was quite a job to judge them all — about 40 in total. I was into the ones that had had the most children’s involvement in them, as that was what it was all about — not the teams that had got too much help from the grown-ups. I used to build go-karts out of worktops and pram wheels with my mates when I was a kid, but this lot had moved it on from that — there wasn’t much MDF in sight.

I learnt a lot through building the karts; getting stuck in to anything is how you discover how things work — it’s the same for me now — so it was good to see these young ’uns having a good go. The best overall team prize went to Edengrove youth club, who got a Ford 12-seat minibus, so they were happy. The Bleary Young Farmers team were quickest over the 20-second course. The track was a short hill with a couple of bends and you’d be amazed how many crashes there were for such a simple run.

I still want to race, but I’m not going to rush into deciding what or where I’m going to race

Having a few days off work gave me time to think about what I want to do and realise all the things that have had to go on hold since my crash. The surgeon had to move my shoulder blade muscles to get the metalwork in and then fasten them all on again. That’s what’s causing the most bother — the muscle, not the broken bones. A lot of my garage work involves having my hands above my head — in the pit, working on a lorry above me — but I’m all right as long as I don’t overdo it.

I still want to race, but I’m not going to rush into deciding what or where I’m going to race. I’ve bent my chassis but a decent service should see it right.

Also read: 50 YEARS OF FORD TRANSIT: THE WACKY WORLD OF ‘THE BACKBONE OF BRITAIN’