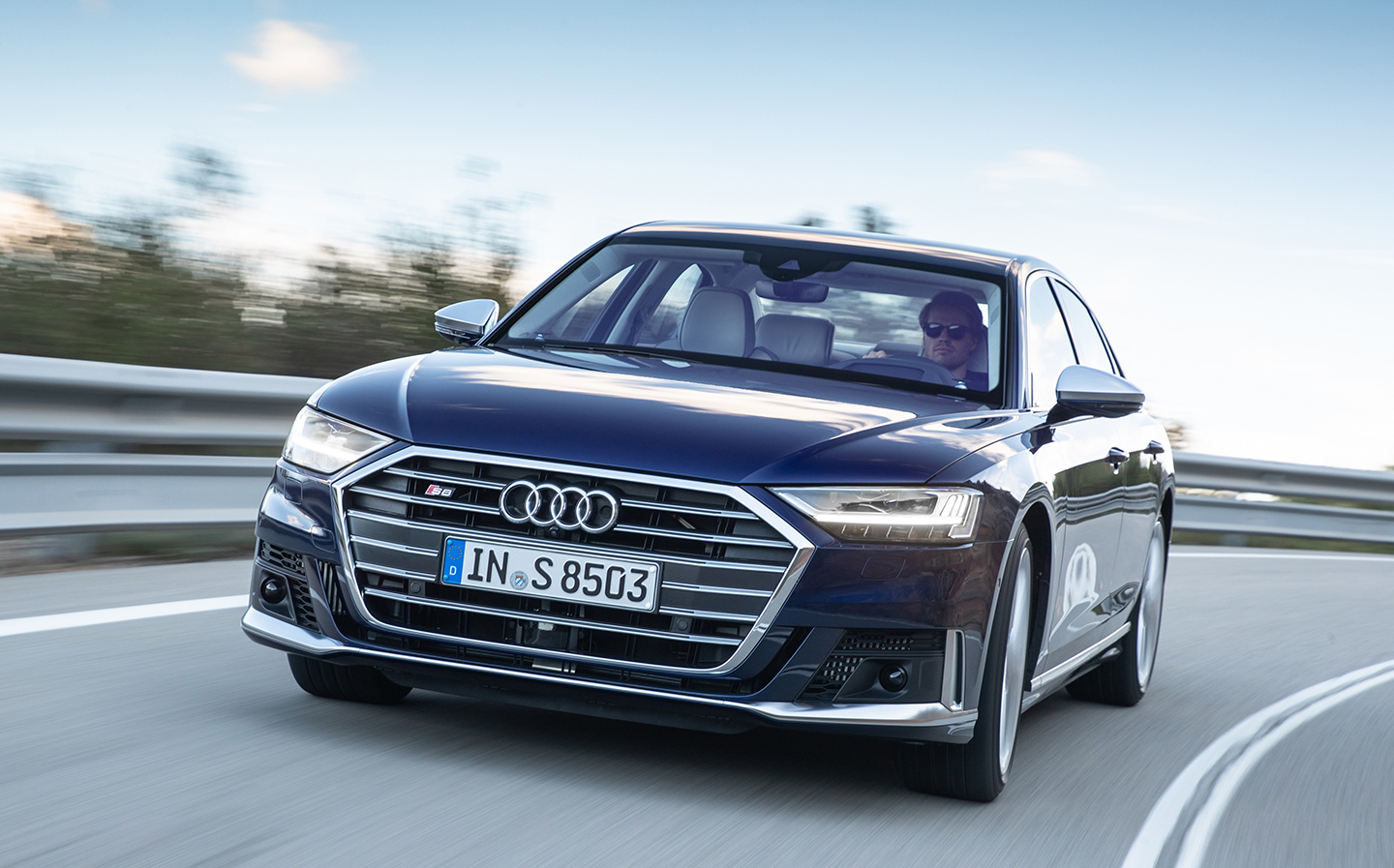 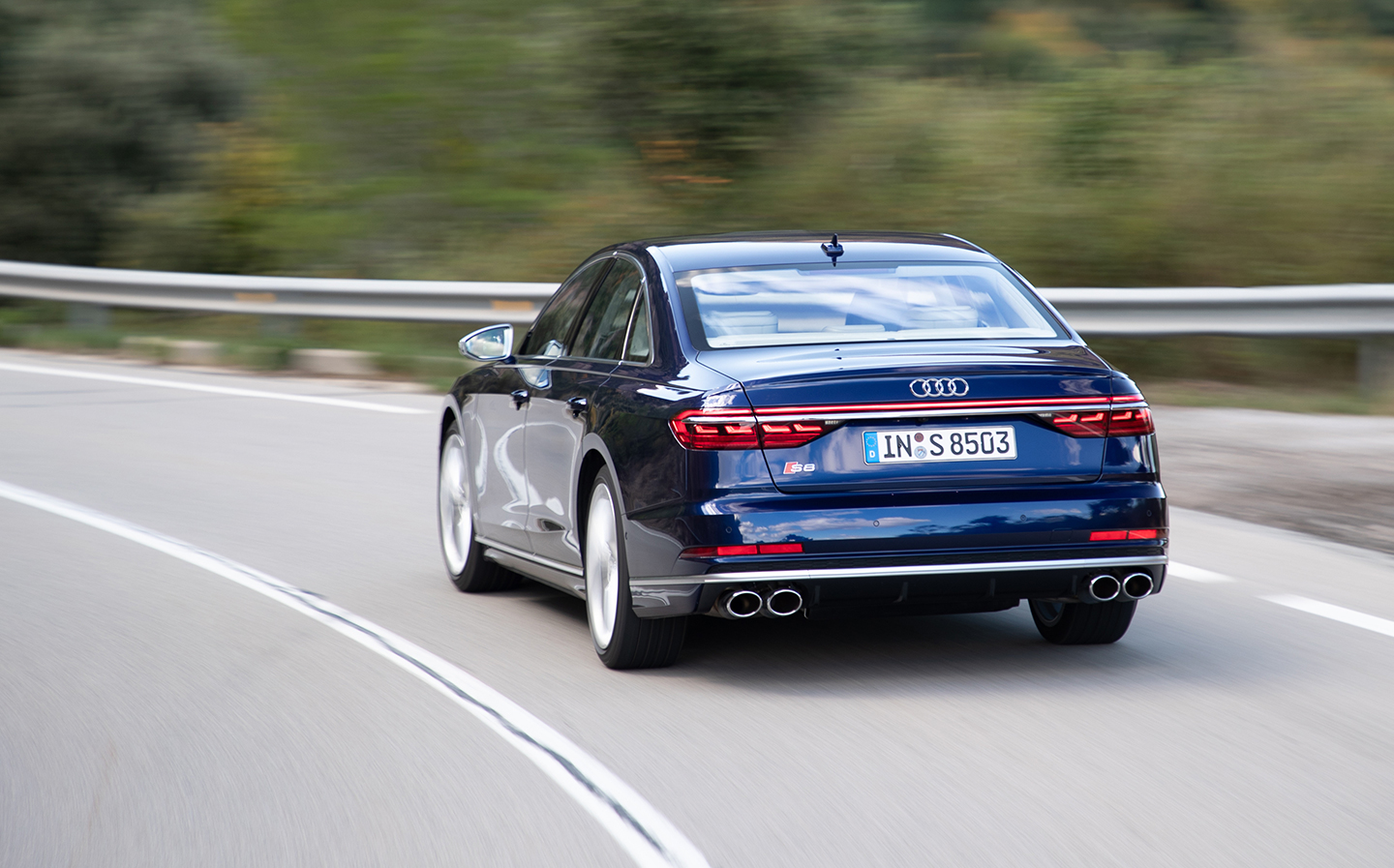 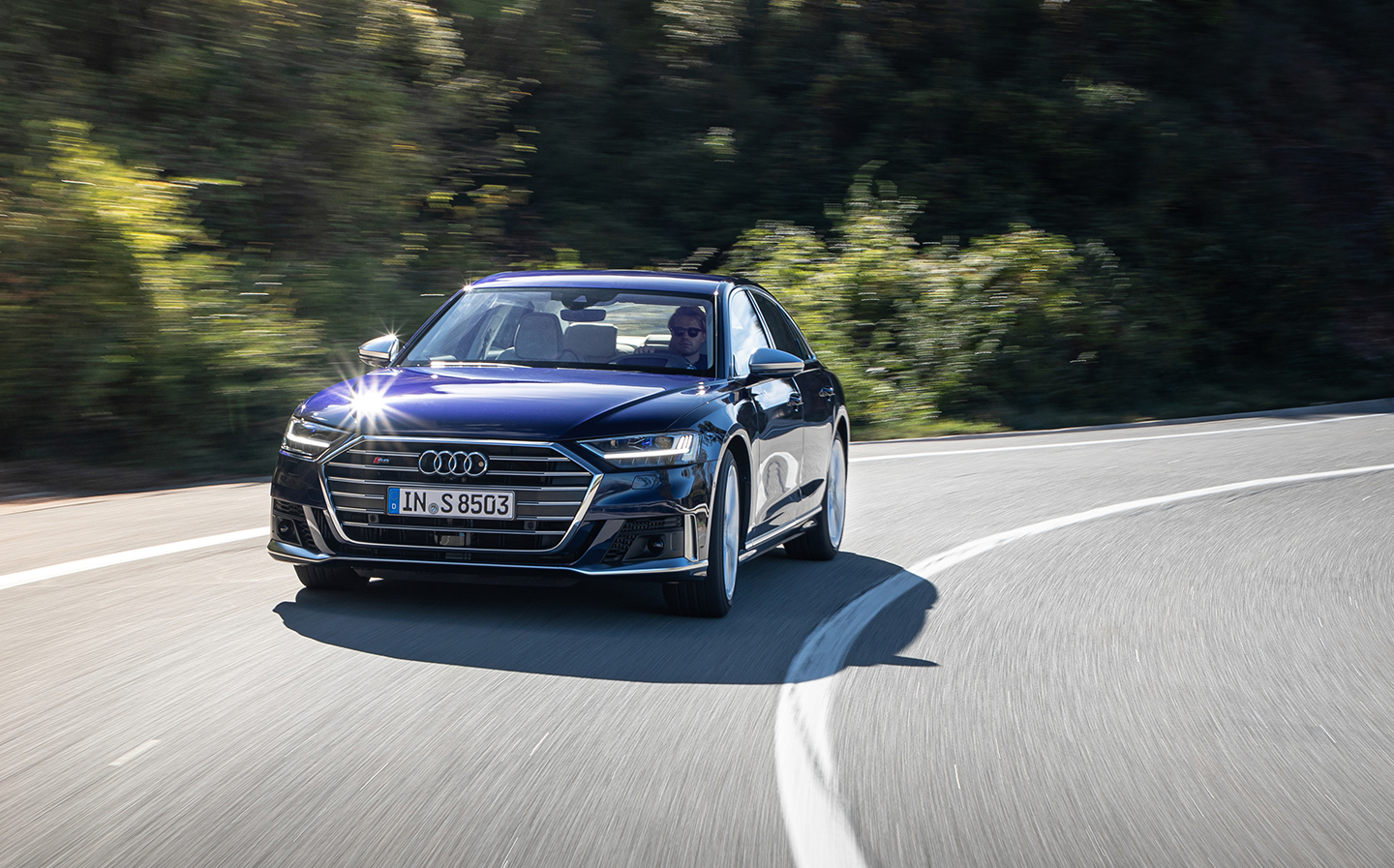 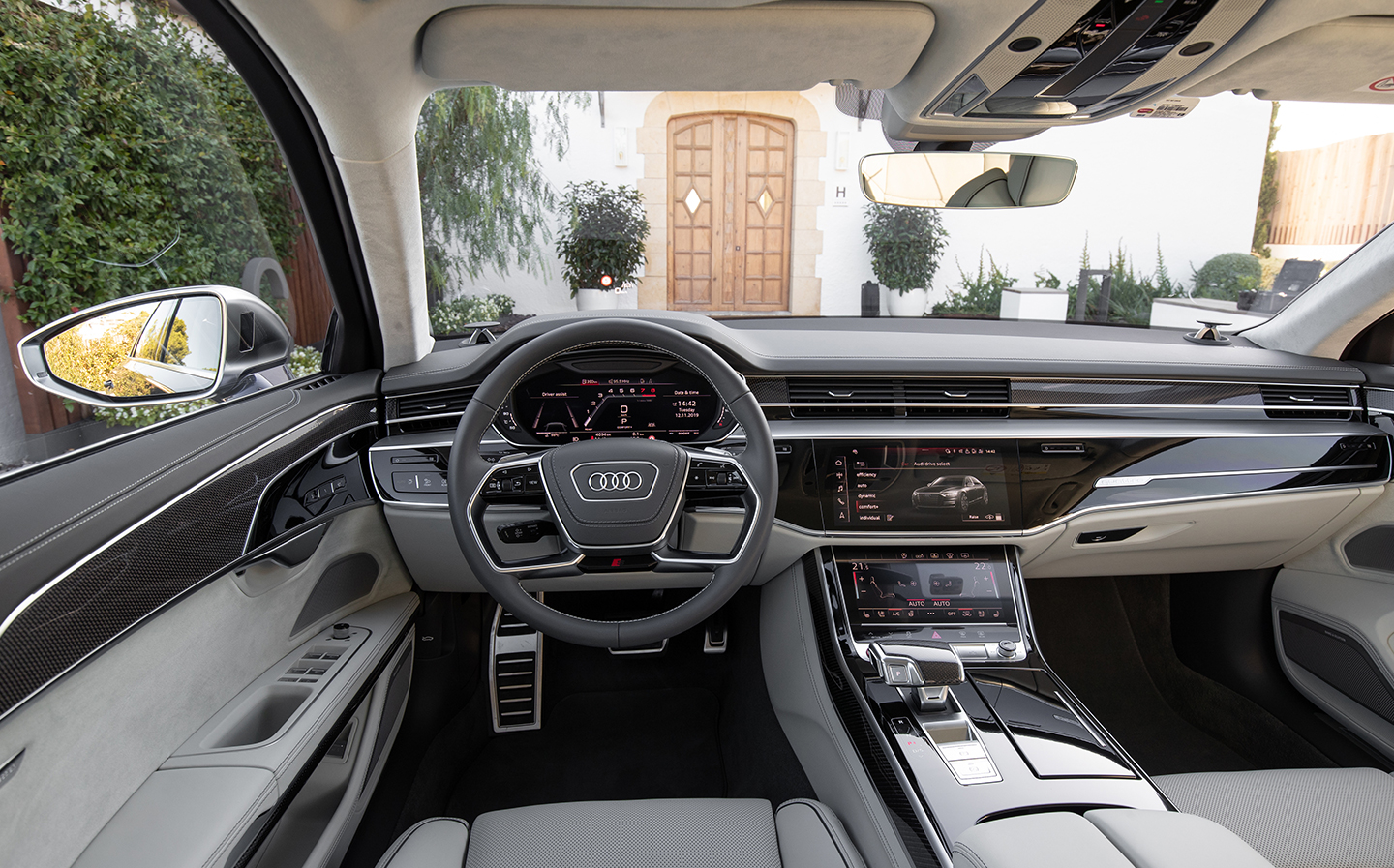 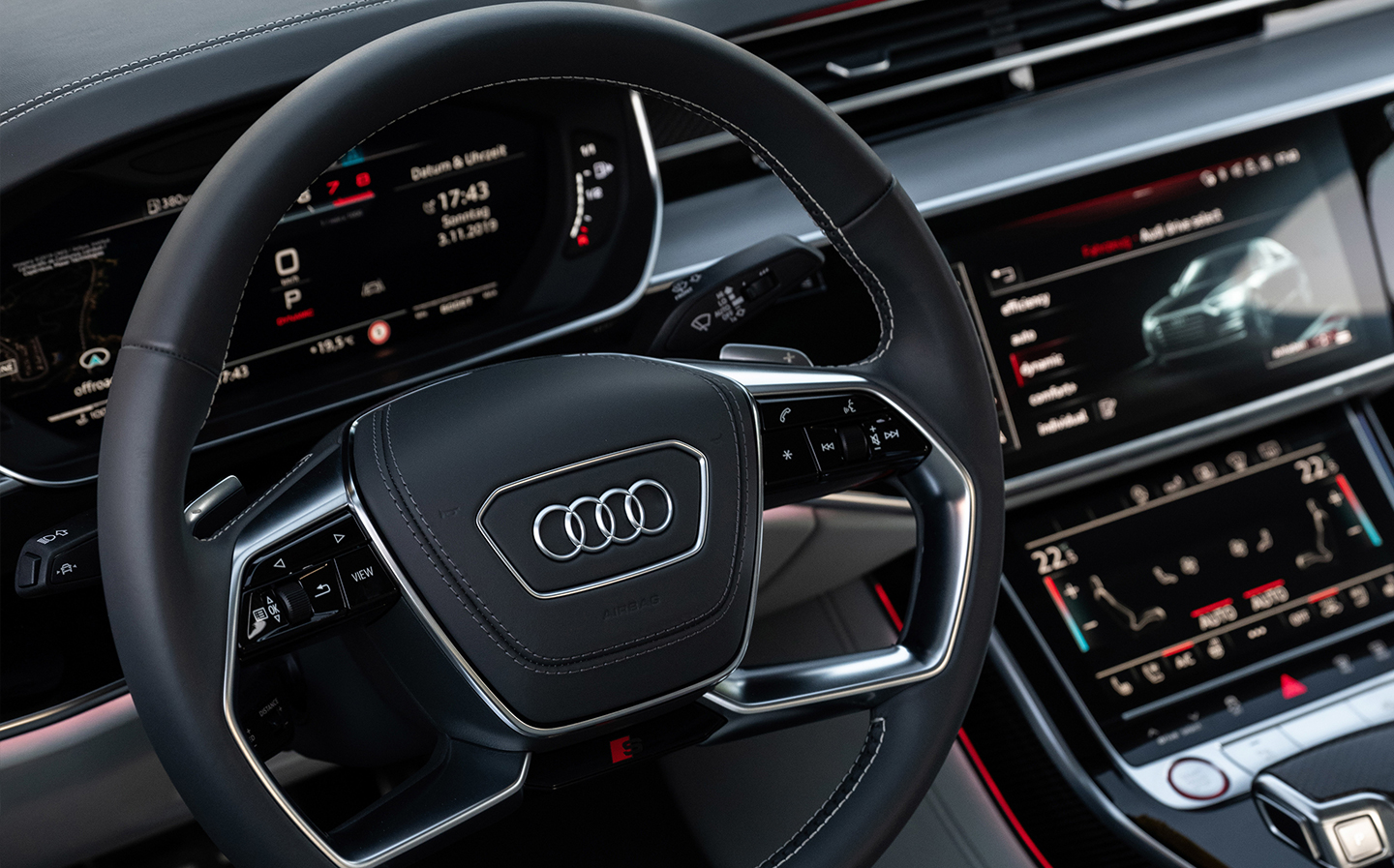 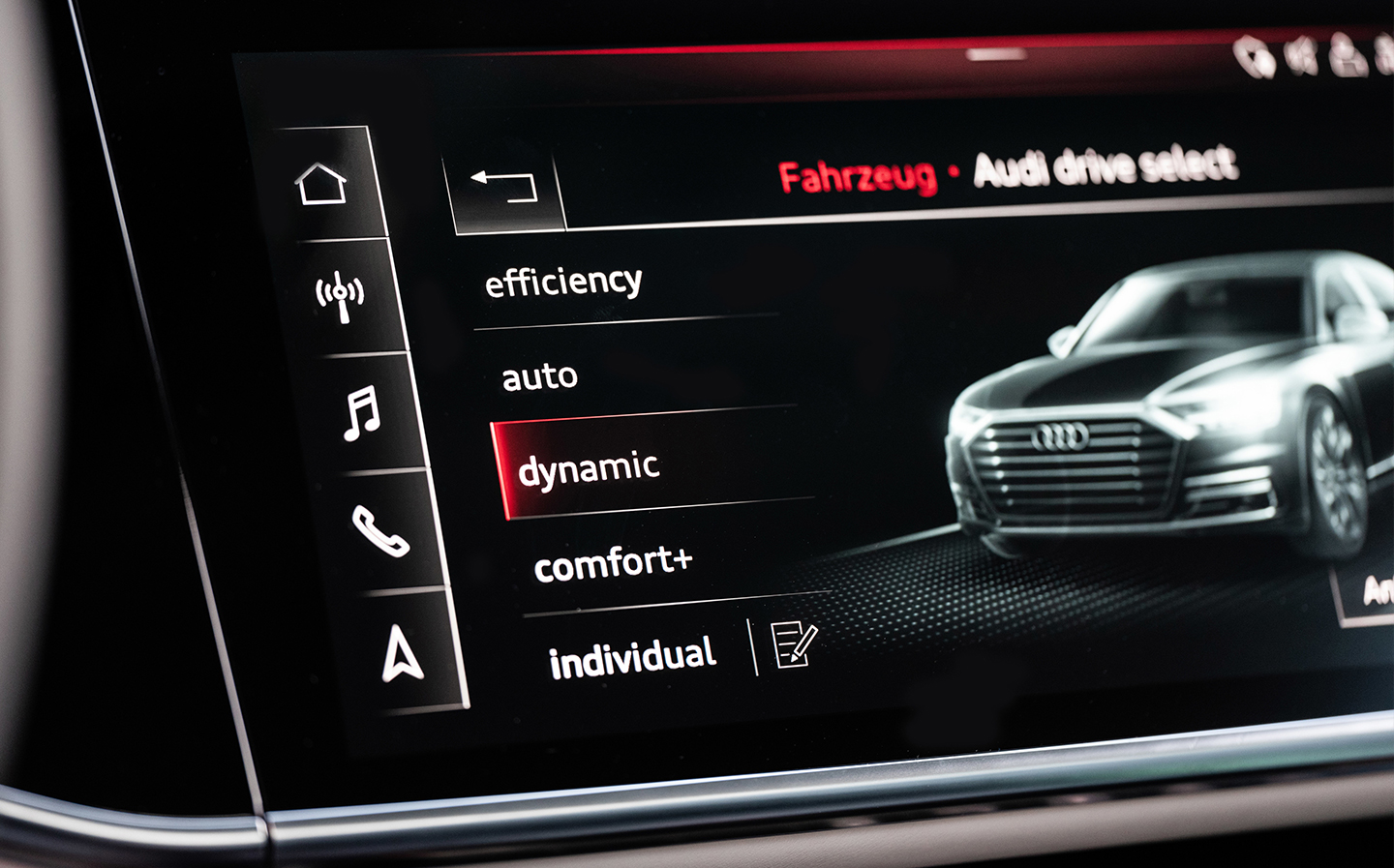 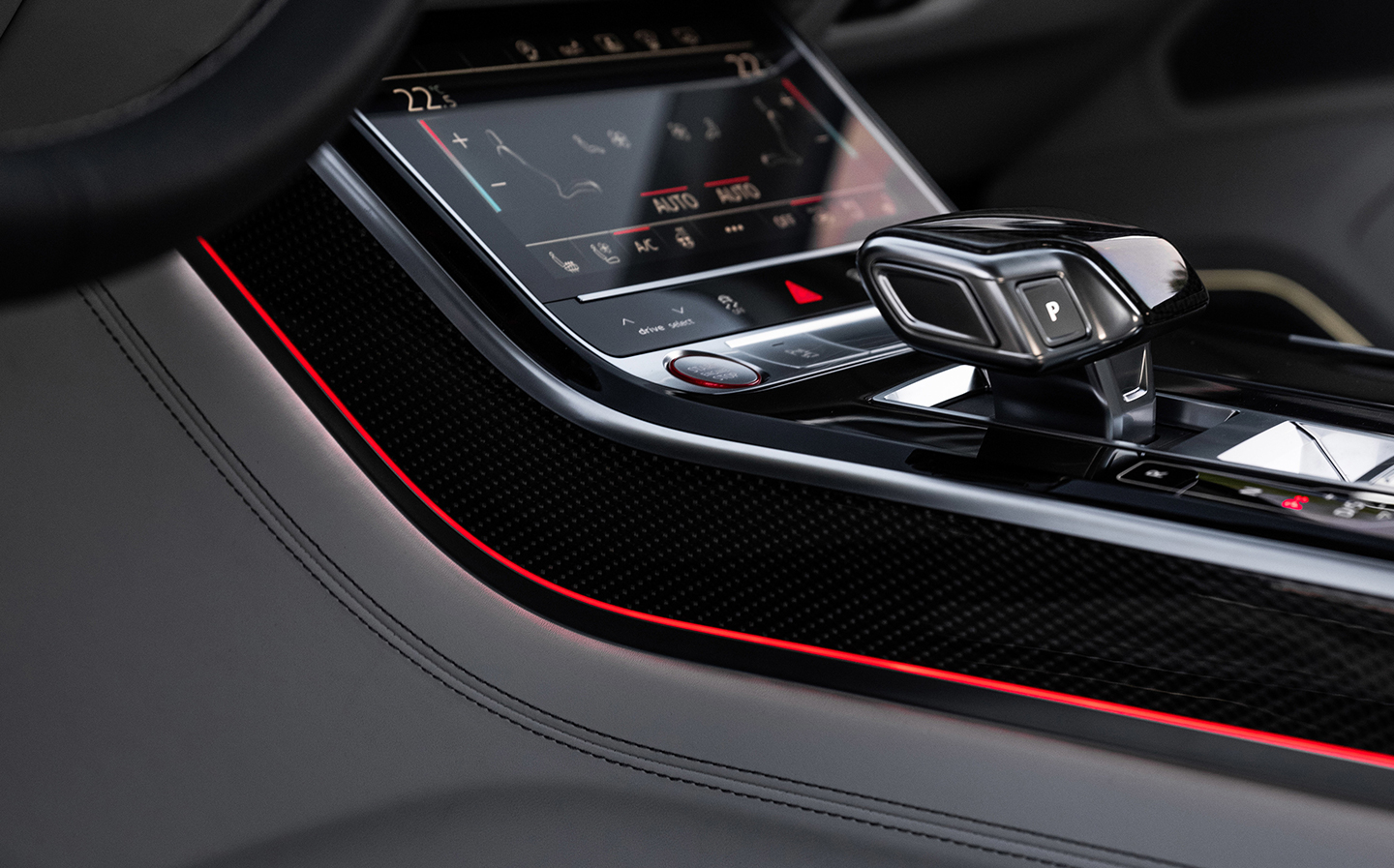 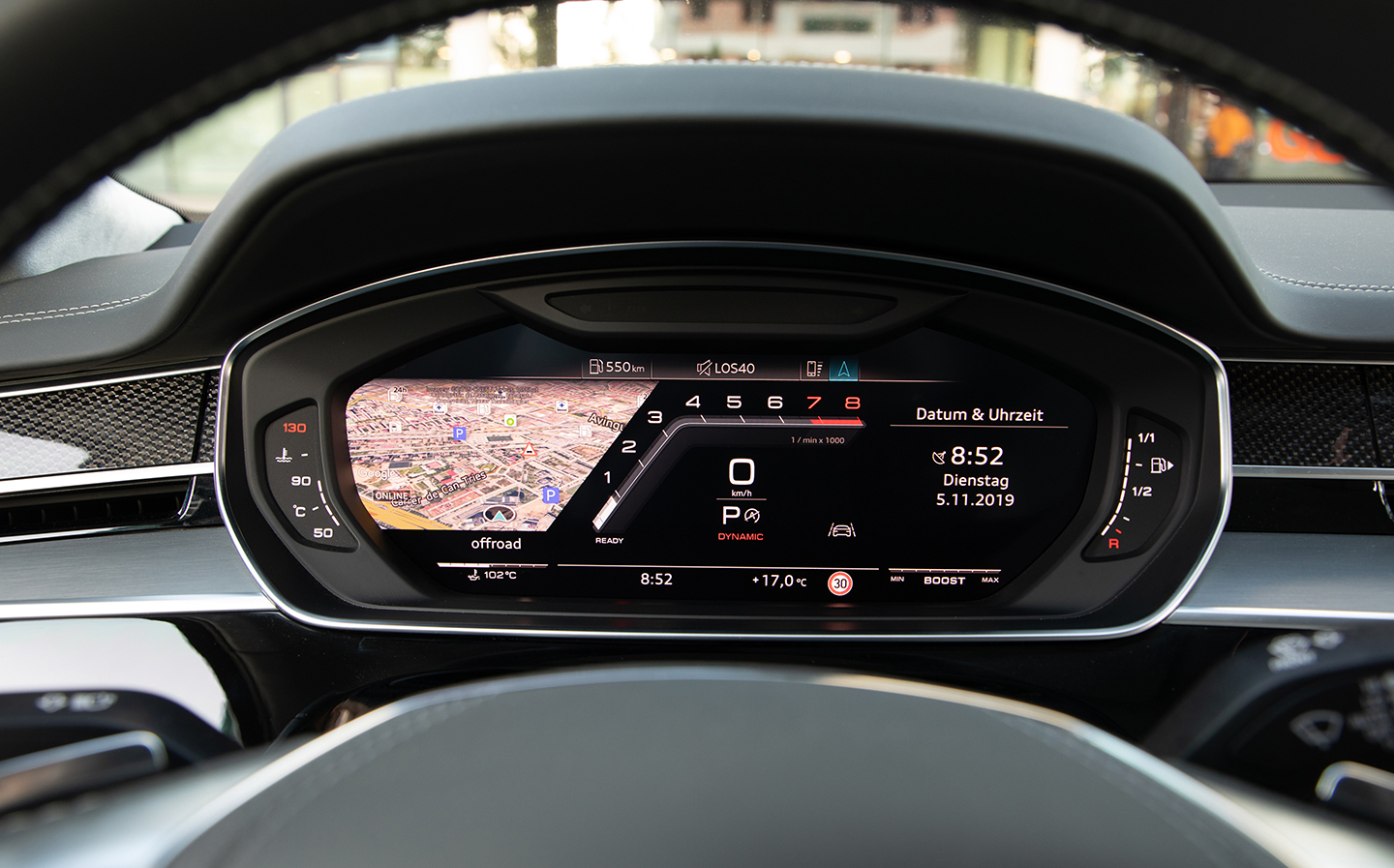 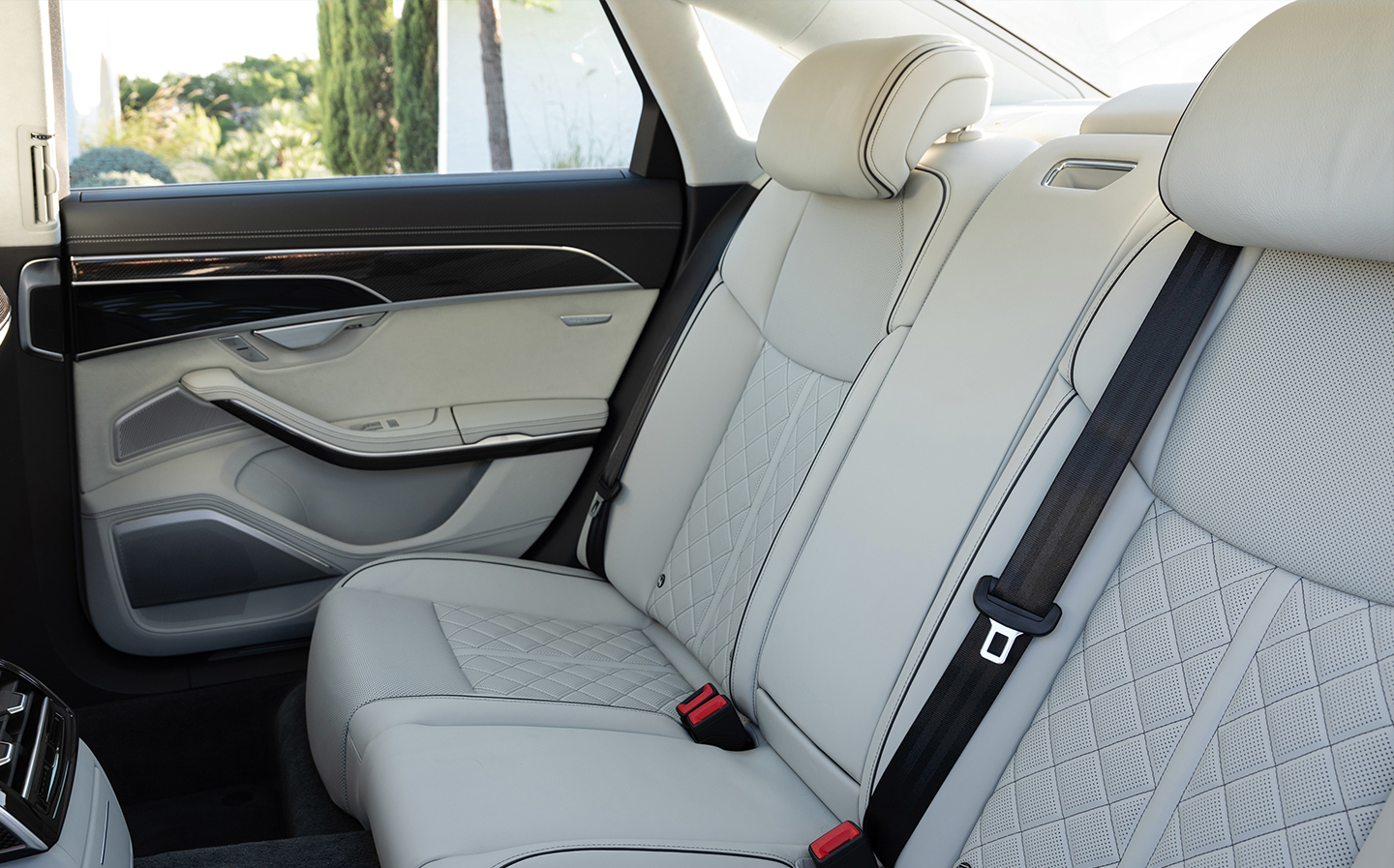 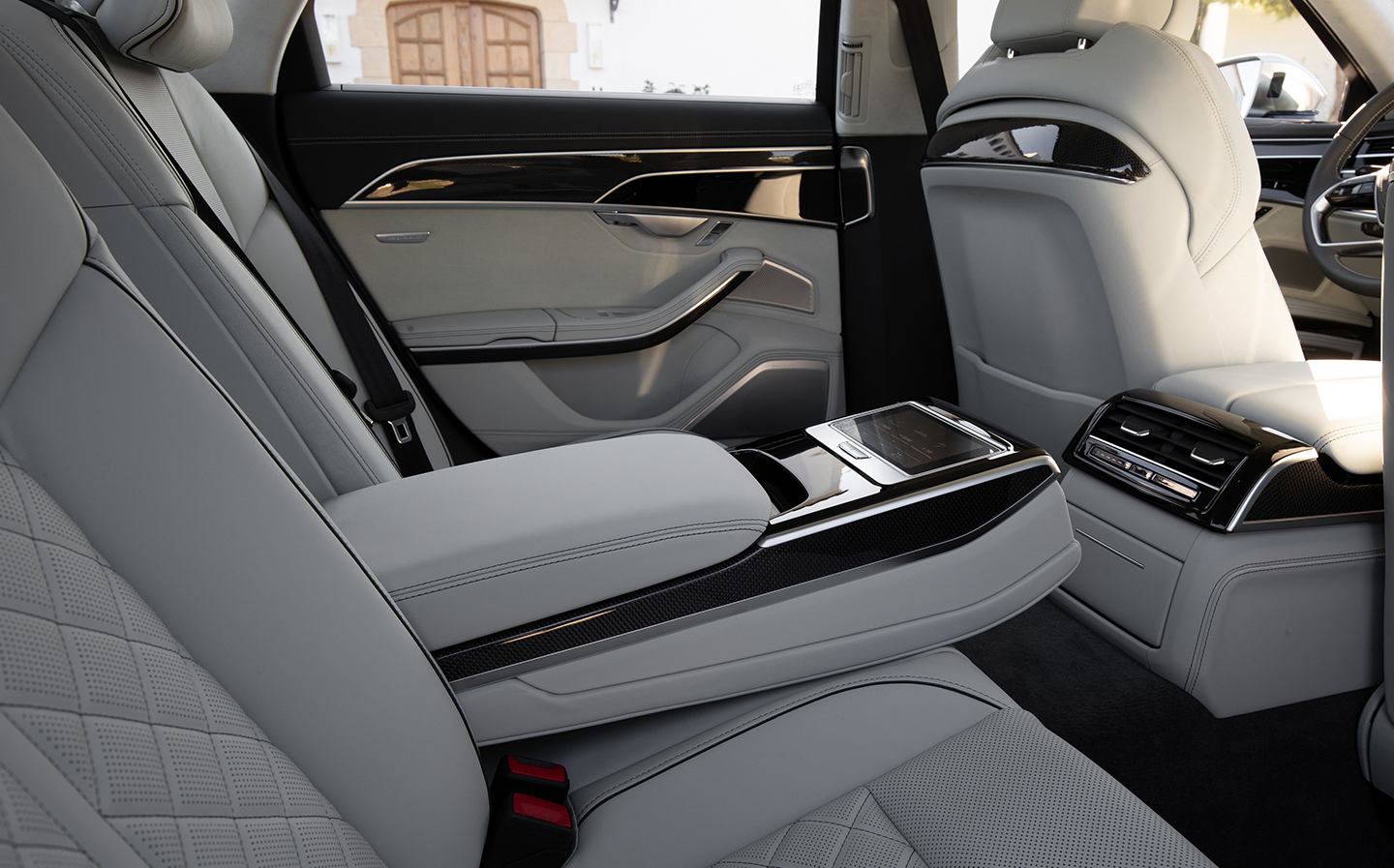 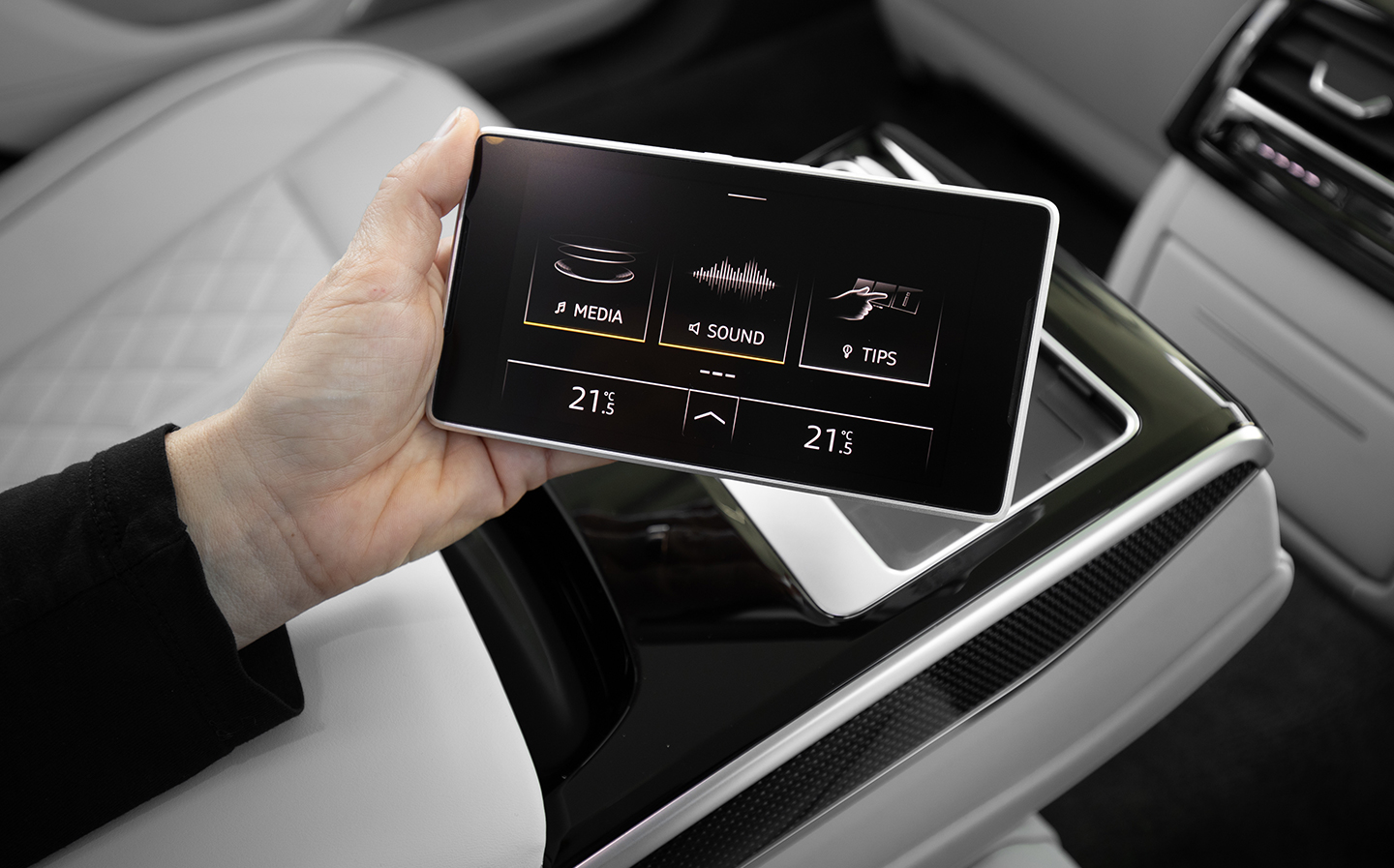 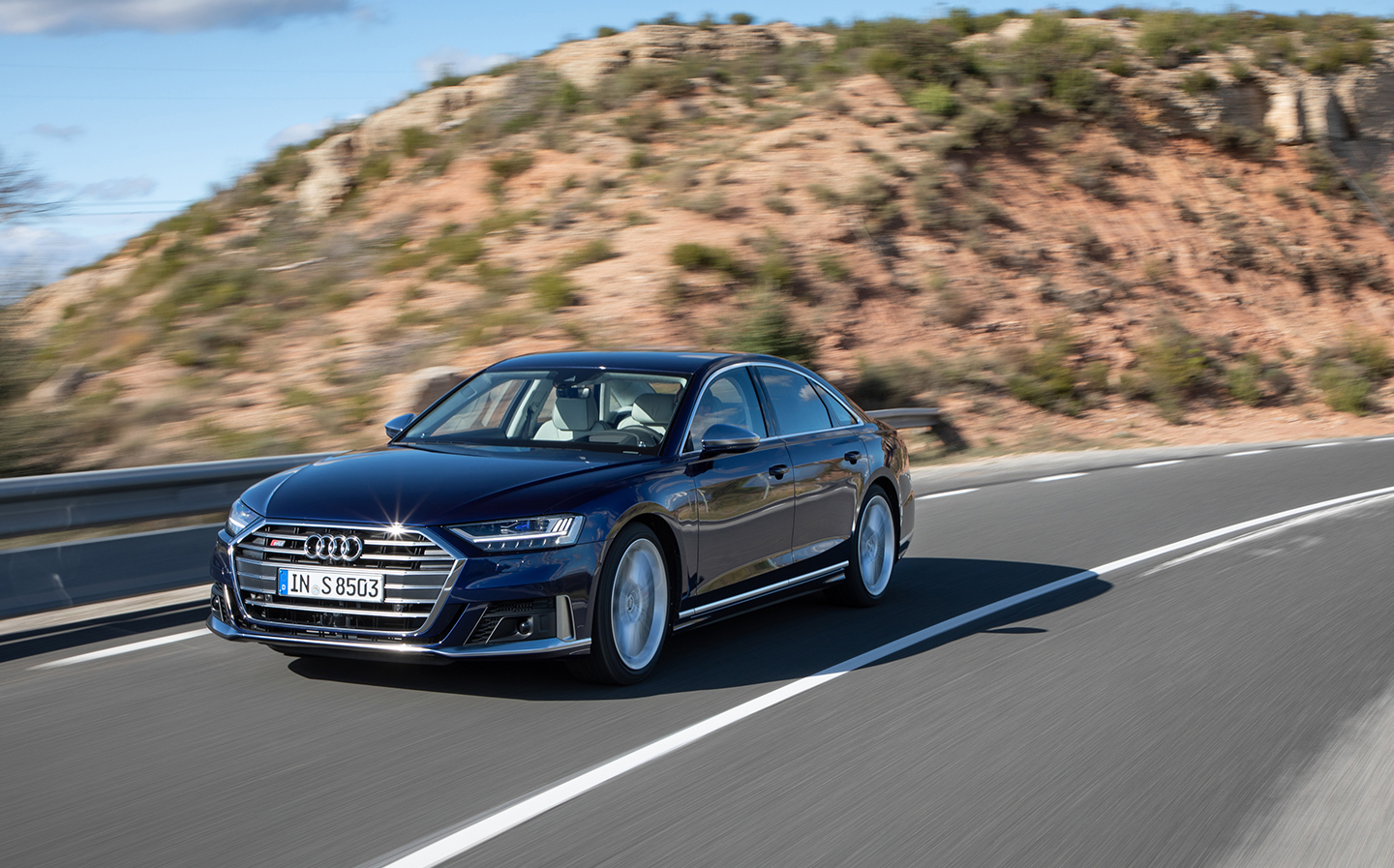 By Will Dron
Share Article
Rewarding to drive, not so fun in the back
At a glance
Pros
Mightily quick
Unbelievable agility
Beautifully-appointed interior
Cons
Rear passengers may feel queasy
Not huge amounts of storage
Might be a bit nondescript for some
Specifications
Cars > Audi > S8

THE AUDI S8 is the quintessential “sleeper” (or “Q”) car. You may know it from the film Ronin, in which a first generation model was used to hunt down a Citroën XM through Nice; it was the perfect car for the job — a sports car in luxury saloon clothing. The basic formula for the new fourth generation car is unchanged: a nondescript A8 saloon bodyshell with a whopping great engine (from a Lamborghini or Bentley) under the bonnet, though this time it has some other seriously impressive tricks up its sleeve.

Let’s start with the way it looks, though, which is predictably unexciting. The A8 is an elegant saloon but the three-box shape is not exactly one that sets the pulse racing. Only subtle details differentiate the S8: around the front bumper, side sills and side mirrors, plus the quad exhaust pipes.

Inside, there are a few subtle clues that what you’re sitting in is no ordinary limo, such as the carbon fibre-effect upper inlay, which extends across the dashboard and along the driver and passenger doors. The S8 also has sports seats, though to most eyes they’ll still look and feel rather sumptuous, and as they also include heating, ventilation and massage functions they couldn’t exactly be described as pared-down.

The rear of the cabin is equally well-appointed, with comfy leather seats, plenty of leg and head room and a centre armrest that comes with its own tablet, allowing you to control the stereo (a rather excellent Bang & Olufsen system), lighting and rear blinds. The optional tablets in the BMW 7 Series are larger and have more functionality (they show the speed and navigation, allowing you to set new destinations en route, for example), but the Audi tablet is still quite a cool thing with which to show off, and slots neatly into the armrest rather than hooking onto the back of the front seats.

But enough of all this — what you really want to know is what it’s like to drive and, if you have a chauffeur, to be driven in. We experienced both on our day with the car, and in fact were asked to sit in the back for the first stint (with one of Audi’s pro chauffeurs up front).

This was a bit of a mistake, as before long both I and my journalist co-driver (we pair up on car launches) were feeling queasy. We quickly worked out that Audi’s active suspension system, which comes as standard on the S8, was probably to blame. Undeniably clever, it can not only iron out bumps in the road and reduce body roll and pitch during acceleration and braking, but in Comfort+ driving mode also leans the car into corners like a superbike. This helps “reduce the lateral acceleration acting on the occupants”, according to the press pack. Unfortunately, it seems to also encourage your breakfast to accelerate up your gullet.

“You can feel the suspension tilting? It’s good, ja?” asked the man up front, as he glided the S8 along a twisty coastal road. “Erm … yes,” we replied while fumbling for the window buttons. The effect is not so bad from the passenger seat, we found, and behind the wheel it’s barely noticeable, but it doesn’t bode well for the S8’s credentials as a posh limo.

From the driver’s seat, though, everything is right. Audi said that in creating the new S8, it wanted to “turn one car into two” — a vehicle that is both luxurious and sporty. And it succeeds at both.

Ride comfort is exceptional, with the “predictive active suspension” able to shrug off bumps in the road thanks to a forward-facing camera that can detect imperfections and adjust the set-up accordingly. At low speeds (up to around 20mph), the car seems to be able to step over sleeping policemen, apparently lifting the front wheels and then the back as the chassis — and you — glide forward as if floating on water. One hump was so extreme we could hear the front springs reaching the end of their travel, as the car heroically attempted to prevent us from experiencing vertical movement.

Audi made a big thing of this on the car’s launch but it isn’t the first time such a system has been introduced to a production car — Mercedes-Benz added a similar thing called Magic Body Control to the A8-rivalling S-class more than six years ago. Still, the S8’s system works wonders, and unlike the Mercedes, the Audi has an extra feather to its cap: it raises the car up on one side by 50mm when you open the door, making it easier to slide in and out.

This is much like the system that can detect side impacts via radar hiding in the front and rear bumpers, and raises the sides so that the incoming vehicle hits the tough sill, rather than more malleable door. The difference being that side impact system works in the blink of an eye, of course, and it raises a little higher.

Thanks to the trick suspension, excellent sound deadening and an active noise reduction system that works via the stereo to create sound waves directly opposite to the boom experienced inside the car, the cabin is whisper quiet and an impressively relaxing place to be. The build quality is undeniably superb, and Audi has chosen a lovely mix of materials. We’d still argue that the Mercedes S-class has the edge over the A8 series in terms of style, but the dual screens in the centre console help lift the Audi’s cabin over the BMW 7 Series.

And when cruising on the highway, the semi-autonomous driving system is astonishingly good, not only keeping you in lane and a safe distance from the car in front but also detecting speed limit signs; we found the car being slowed according to the signposts as we approached a Spanish toll booth. In all, there are 38 driver assistance systems on the new S8.

But the Mr Hyde to the Audi’s Dr Jekyll is why you’d want the S8 over a standard limo, and flicking the car into Dynamic mode wakes up this ferocious beast. Under the bonnet is the same 4-litre biturbo V8 engine that you find in the Bentley Continental GT V8, Lamborghini Urus and Porsche Panamera GTS, though tuned with a mild-hybrid system to produce 563bhp and 590 lb-ft of torque. This is 50bhp more than the previous S8 quattro (the D4 model), and an extra 111 lb-ft. Which is a lot of extra poke under your foot.

And yes, it’s quick. Very quick for a lump that weighs more than two tons, in fact — the new S8 can hit 62mph from standstill in 3.9sec. Fortunately its quattro four-wheel drive system works seamless to keep the car locked to the road surface at both the front and rear, and with a sports differential on the rear axle, rear wheel steering and the active suspension system, the S8 can pivot around tight turns so fiercely that you’ll need an iron constitution to blast it along tight mountain passes.

The power distribution has been engineered for neutral to slightly oversteer, though at no point did we ever feel like planting the accelerator on the exit of a corner was likely to have us pointing in the wrong direction. It’s a car you can drive with confidence however much you’re hustling it along.

The 8-speed tiptronic transmission is so seamless it’s as if the car isn’t changing any cogs at all… except when pulling away from lights, at which point there is an unpleasant tendency for the car to lurch forward, which is odd for an executive limo.

And I could mention that fuel consumption is terrible when doing so, but the official figures are still to be announced and, anyway, there’s not much point as buyers aren’t likely to care too much about such things. It won’t be too far off the BMW M750i xDrive and Mercedes-AMG S63 4Matic, though.

Should you go for the Audi S8 over its German rivals? Its clever suspension and mighty powerplant might not be enough to sway you, though Audi tells us the S8 will be priced at “around £100,000”, which makes it not only packed with technology but also very competitively priced against the S63 and Porsche Panamera Turbo.

Buyers aren’t short of choice, though, and despite the current climate around climate change, big, powerful luxury barges aren’t going away — we recently drove the BMW 8 Series Gran Coupé, which soon will be available with the BMW M8 Competition powertrain, and that could be an excellent alternative. We’d be very surprised if the driving dynamics of the BMW prove to be more satisfying than S8’s, though, so the Audi could be the best value of the lot. Just make sure you’re riding in the front, preferably in the driver’s seat.