By Mat Watson
Share Article
Worthy of the Supra name, even if we have BMW to thank
At a glance
Pros
Brilliant engine
Comfortable ride
Standard equipment
Cons
Rivals handle even better
No Android Auto
Available in small numbers
Specifications
Cars > Toyota > Supra

TOYOTA Supras are like buses. We’ve waited seven long years for this latest model to appear since it was first announced, and now two come along at once. Well, that’s a little harsh — one is actually called the BMW Z4.

You see, this new Supra and the Z4 share plenty of oily bits beneath the surface, as well as piano black plastic and electronic gubbins above it.

However, according to Toyota, although much of the hardware and software is shared between Z4 and Supra, the two firms worked completely separately in their development of each model so the two cars should have distinct ride and handling characteristics, and unique personalities.

Also, it’s more likely Supra buyers will have one eye on other solid-roofed sports cars such as the Porsche 718 Cayman, Audi TT S and Alpine A110, whereas the Z4 comes with a folding lid and so instead rivals roadsters.

Toyota has a long heritage which is reflected in the Supra’s new design — its long bonnet, two seats and double-bubble roof are reminiscent of Toyota’s 2000GT from the late 1960s. Then there’s that spoiler flick at the back which harks back to the famous fourth generation Supra of the 1990s.

But Toyota has spent lots of time making this new car better to drive than ever before. In true Supra tradition the new car comes with a front-engineered, rear-wheel drive configuration, and BMW’s lush 3.0-litre, six-cylinder turbocharged petrol engine sends 335bhp through a superb eight-speed automatic gearbox. Zero to 62mph comes in 4.3 seconds, although you’ll also enjoy the way it pulls hard from low revs for sprinting down motorway slip roads and overtaking.

In fact, on country roads the Supra is easily fast and agile enough to excite. Putting it in its Sport driving mode adds more weight to the steering, livens up the accelerator and gearbox and opens a flap in its exhaust for more pops and bangs.

The Supra grips hard through tight bends, with pleasing body control, but if getting a quick lap time is most important to you then a Cayman will be even more poised and ultimately quicker still.

Using Normal driving mode in town reveals the Supra to be the slightly more comfortable than most sports cars, though. It’s easy to see out of, too, and its light but precise steering and decent turning circle make it easy to park — its standard front and rear sensors and rear camera help further. It’s even decently comfy and quiet on the motorway, for longer jaunts.

Inside, the driver-focused cabin with its tightly grouped controls do make it feel like a proper sports car. Toyota has borrowed lots of the Supra’s insides from BMW, but while trying to spot the Toyota components may displease Supra purists, the German hand in the cockpit’s design does mean that everything looks and feels high-end. The switches and air vents are sturdy, along with a good mix of quality materials, while the Supra also gets BMW’s fantastic iDrive infotainment system – even if it is a last-generation version.

Was one of the longest waits in automotive history worth it?

DAB radio and Bluetooth connectivity comes as standard, and anyone who still uses built-in sat-nav will be pleased to know it is included, too. iPhone users will be plugging in via USB for the Apple CarPlay smartphone mirroring but bizarrely, there’s no Android Auto option. At least the BMW infotainment system’s logical menus mean isn’t as terrible as most Japanese efforts.

The Supra’s cabin is spacious for two people, while its standard sports seats are supportive and the driver is treated to loads of seat and steering wheel adjustment — although even in its lowest setting some might feel that the driving position is a little higher than they’d like. At 290 litres the Supra’s boot isn’t huge, is also quite shallow and has an awkwardly narrow opening. However, nobody is buying a car like the Supra for its space and you can expect to fit a weekend’s luggage onboard no problem.

So, was one of the longest waits in automotive history worth it? Without doubt. Buying a Toyota Supra won’t make you the quickest sports car owner,but it’ll make you one of the happiest. And, if that has a lot to do with BMW’s input, then so be it.

There’s just one small problem: few will be made and the first 300 have now sold out, so get your name down for the next batch quickly. 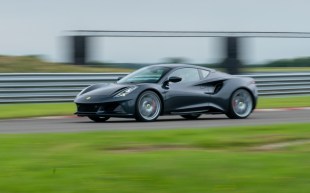