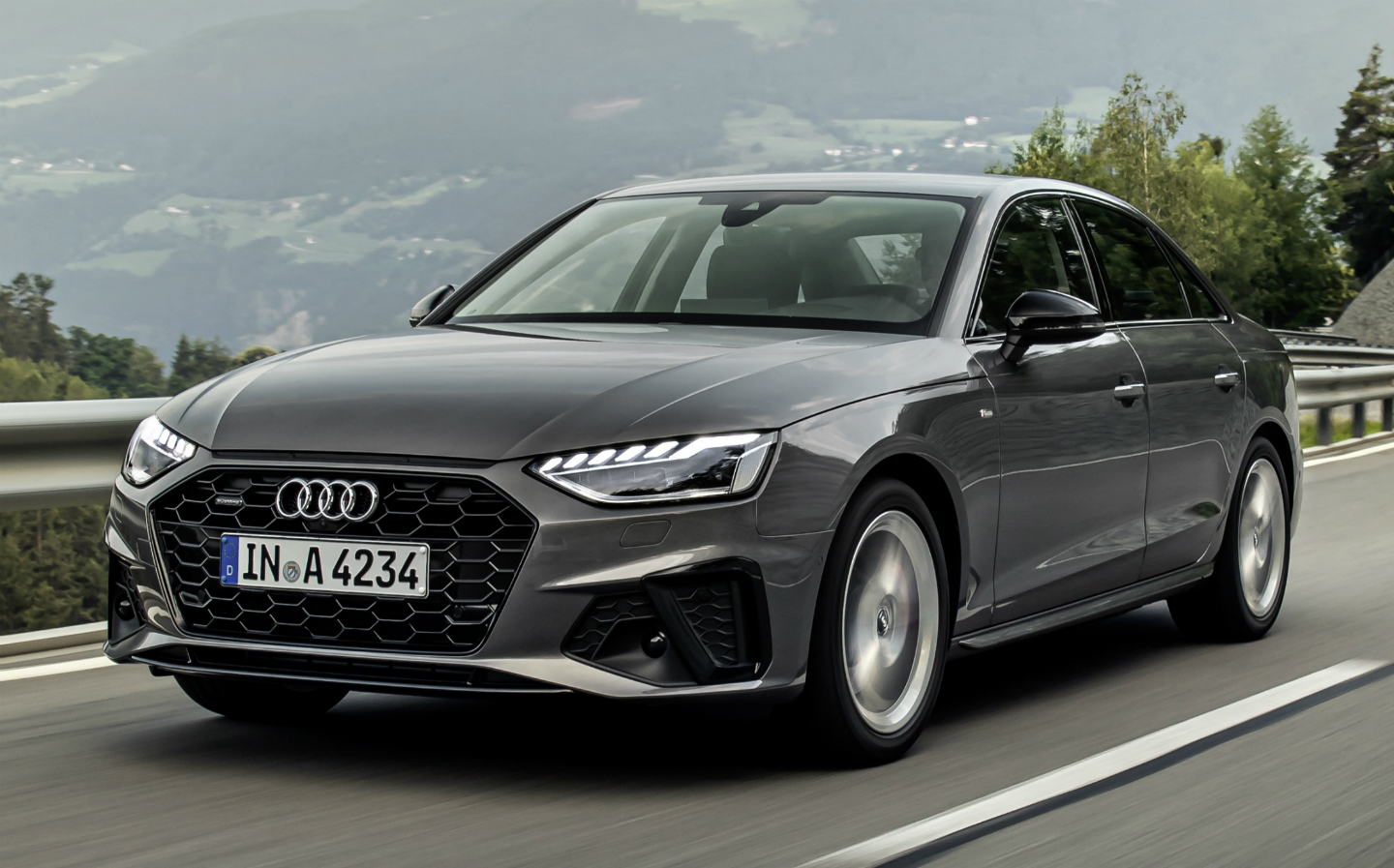 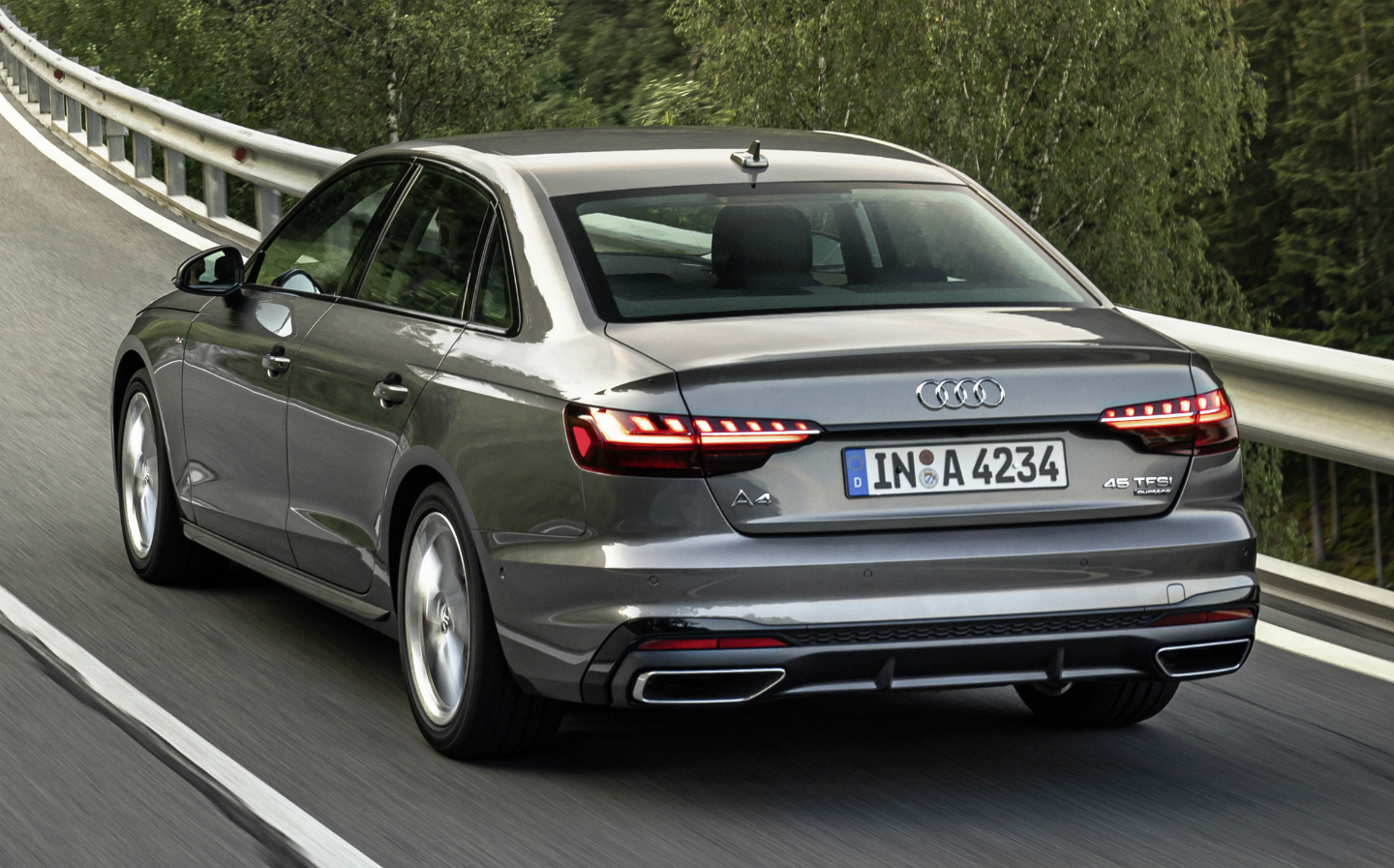 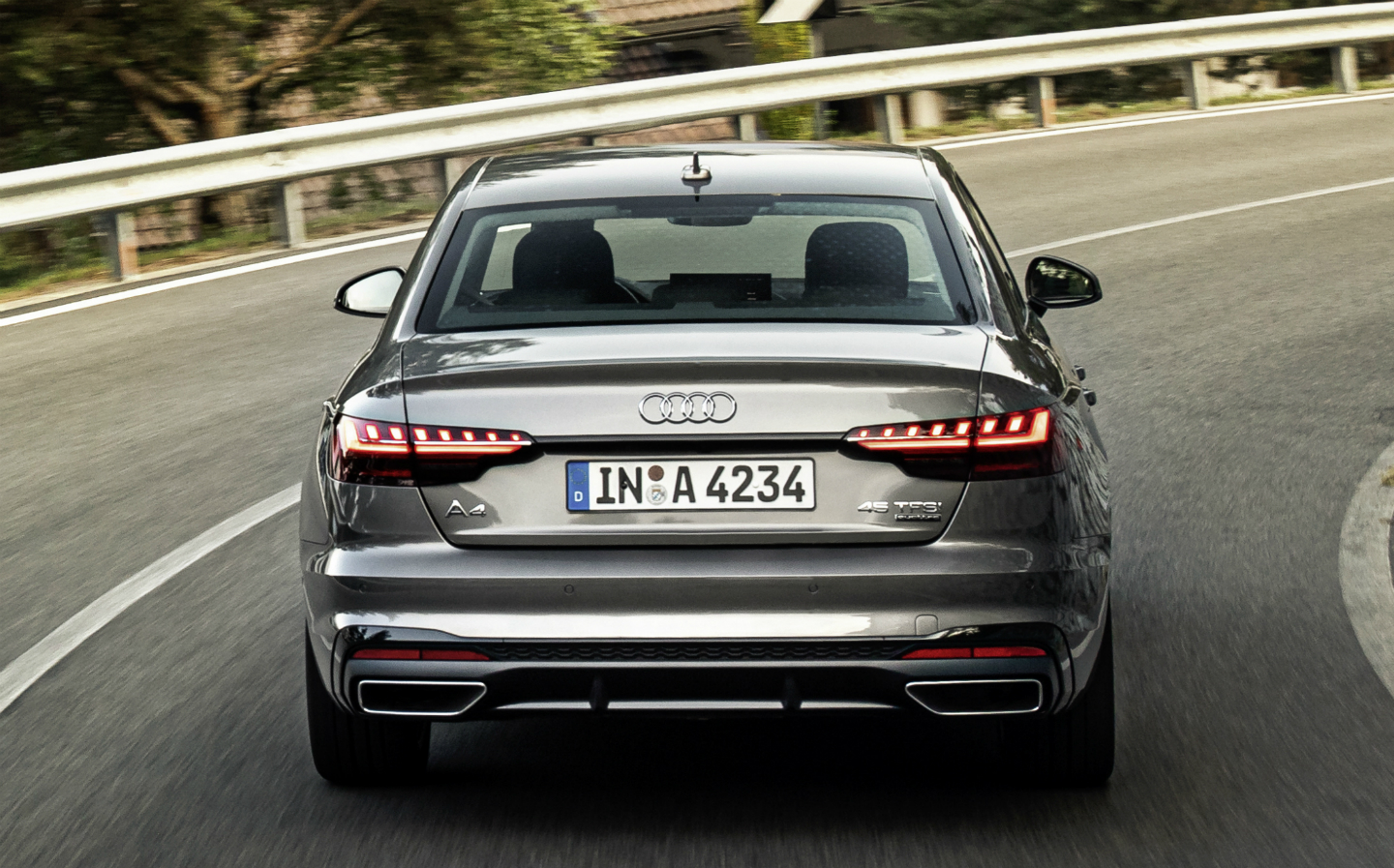 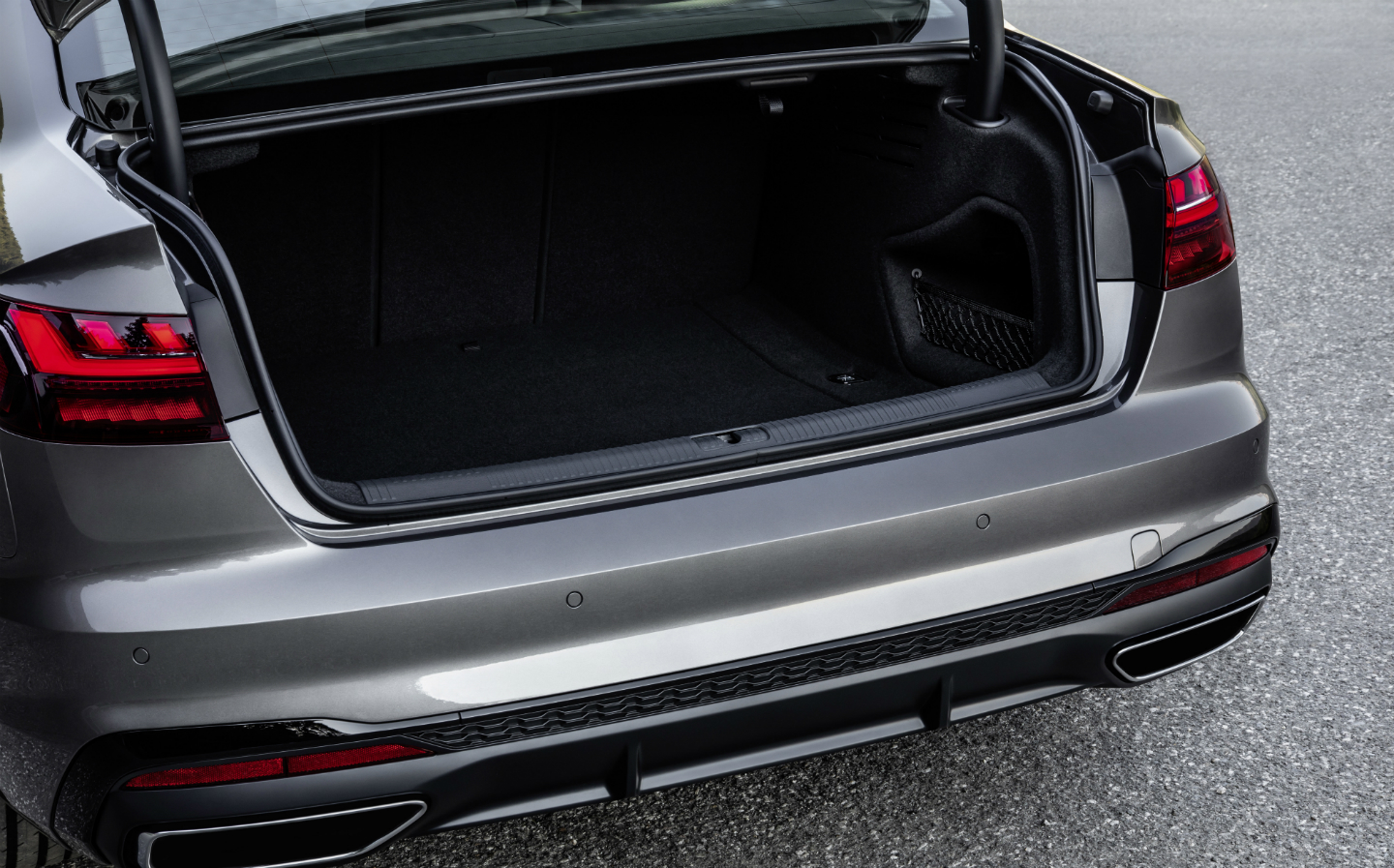 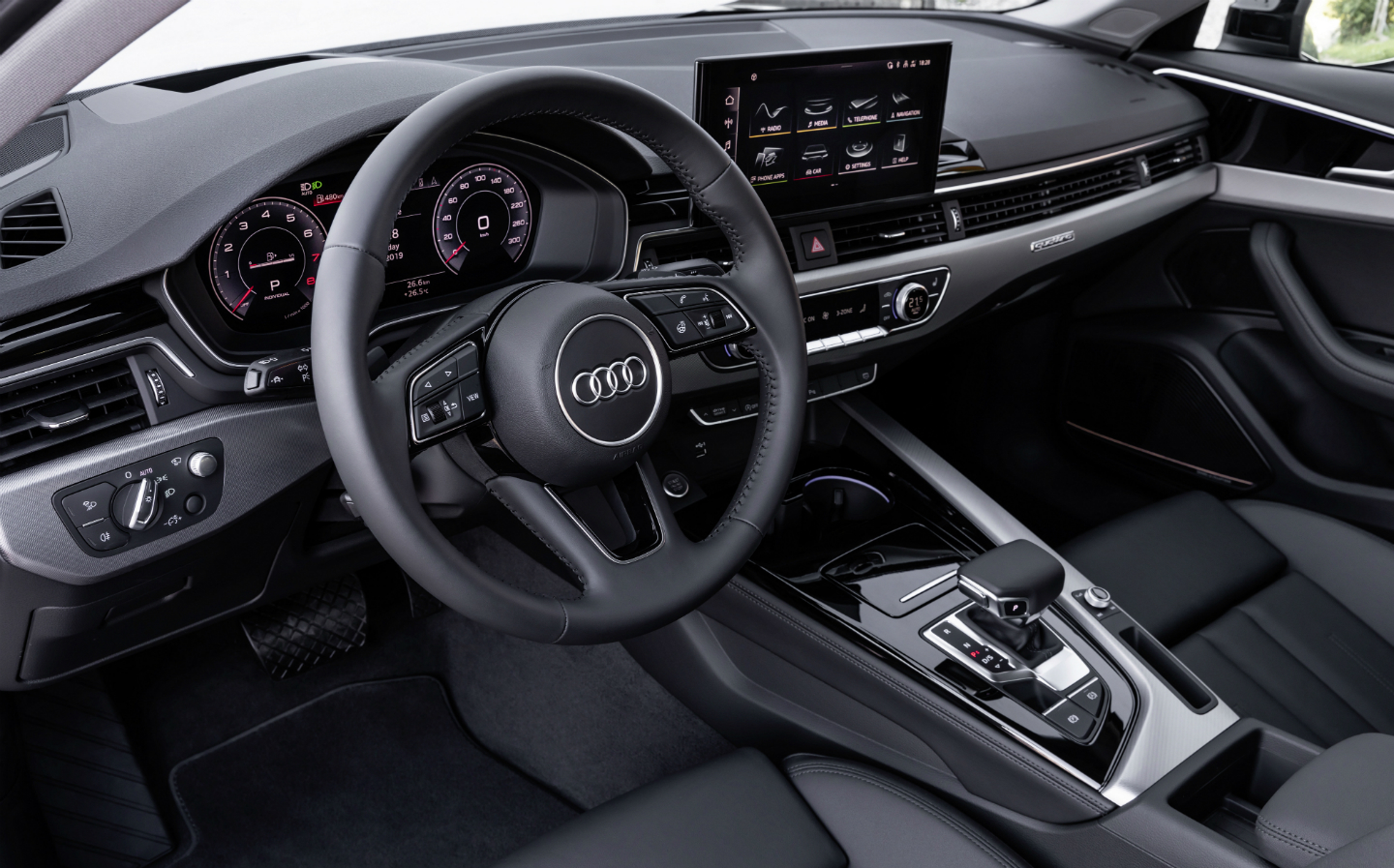 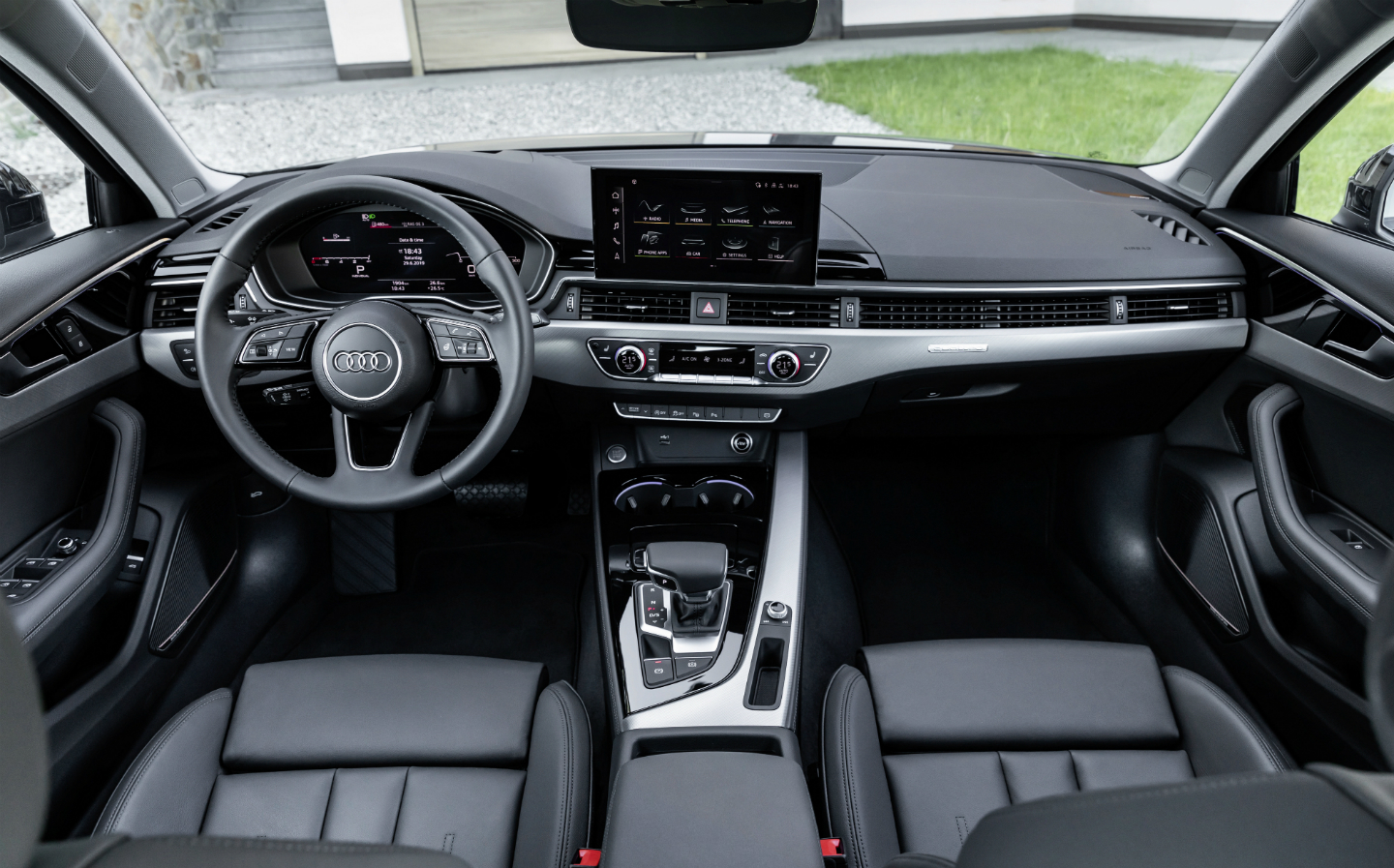 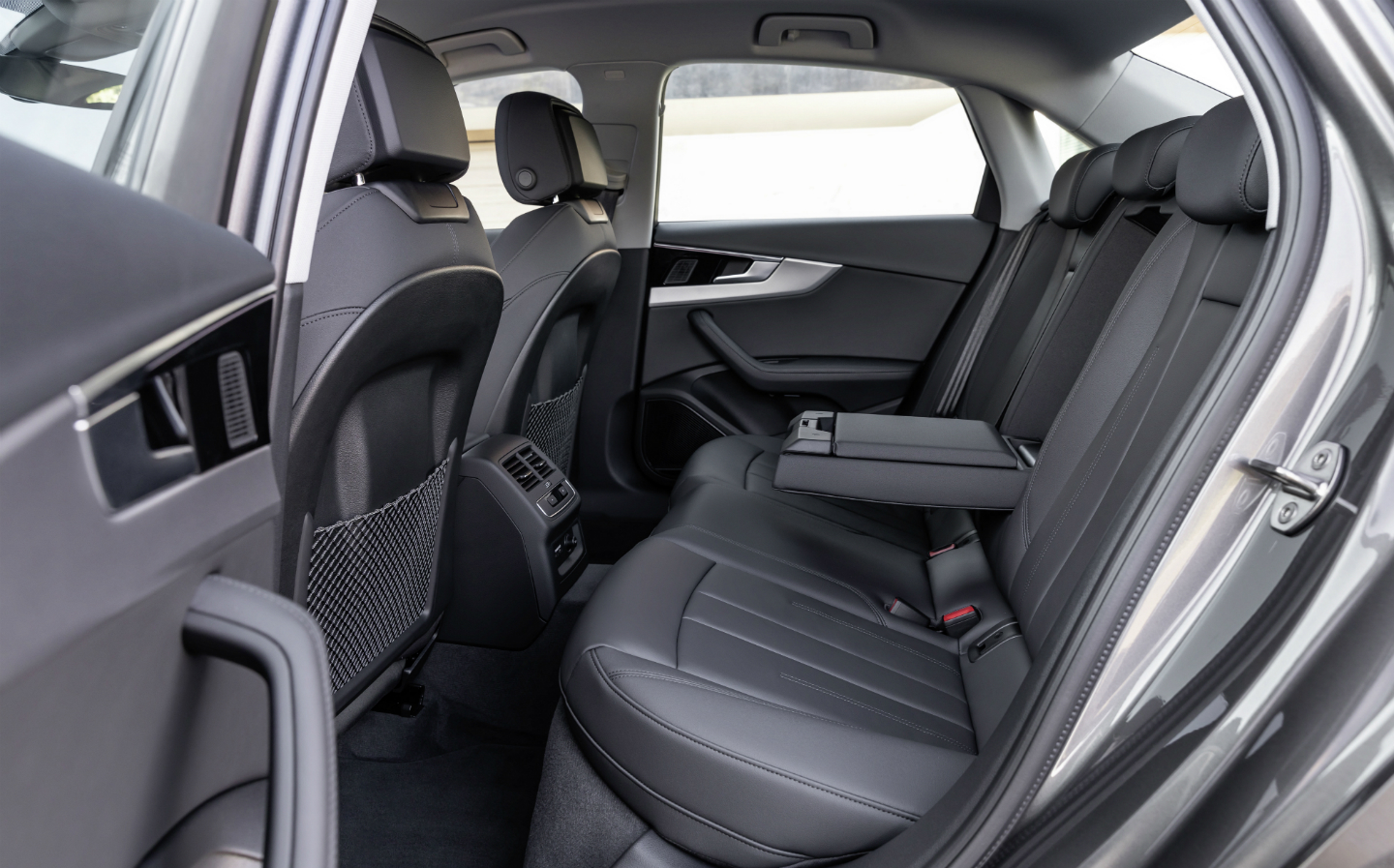 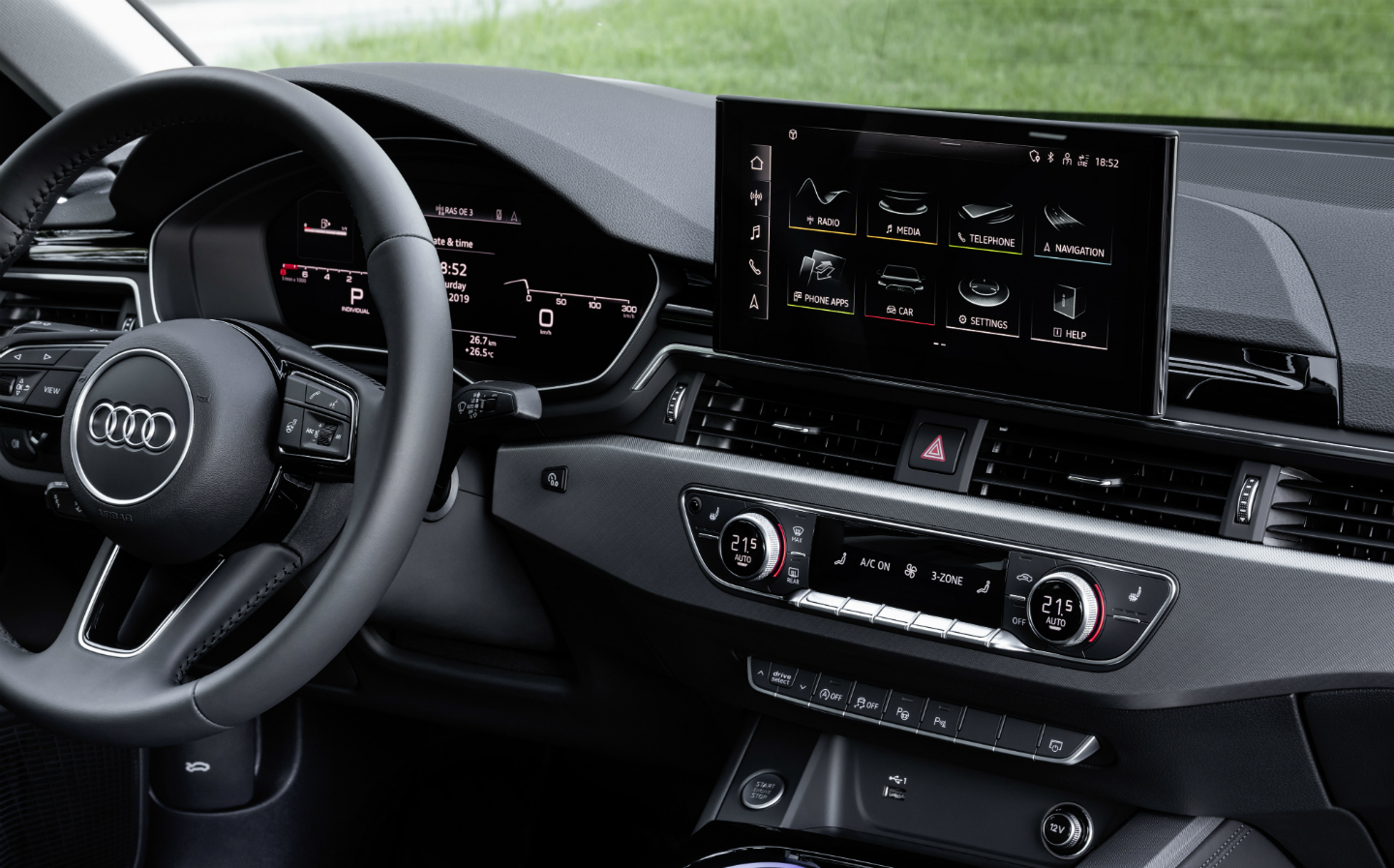 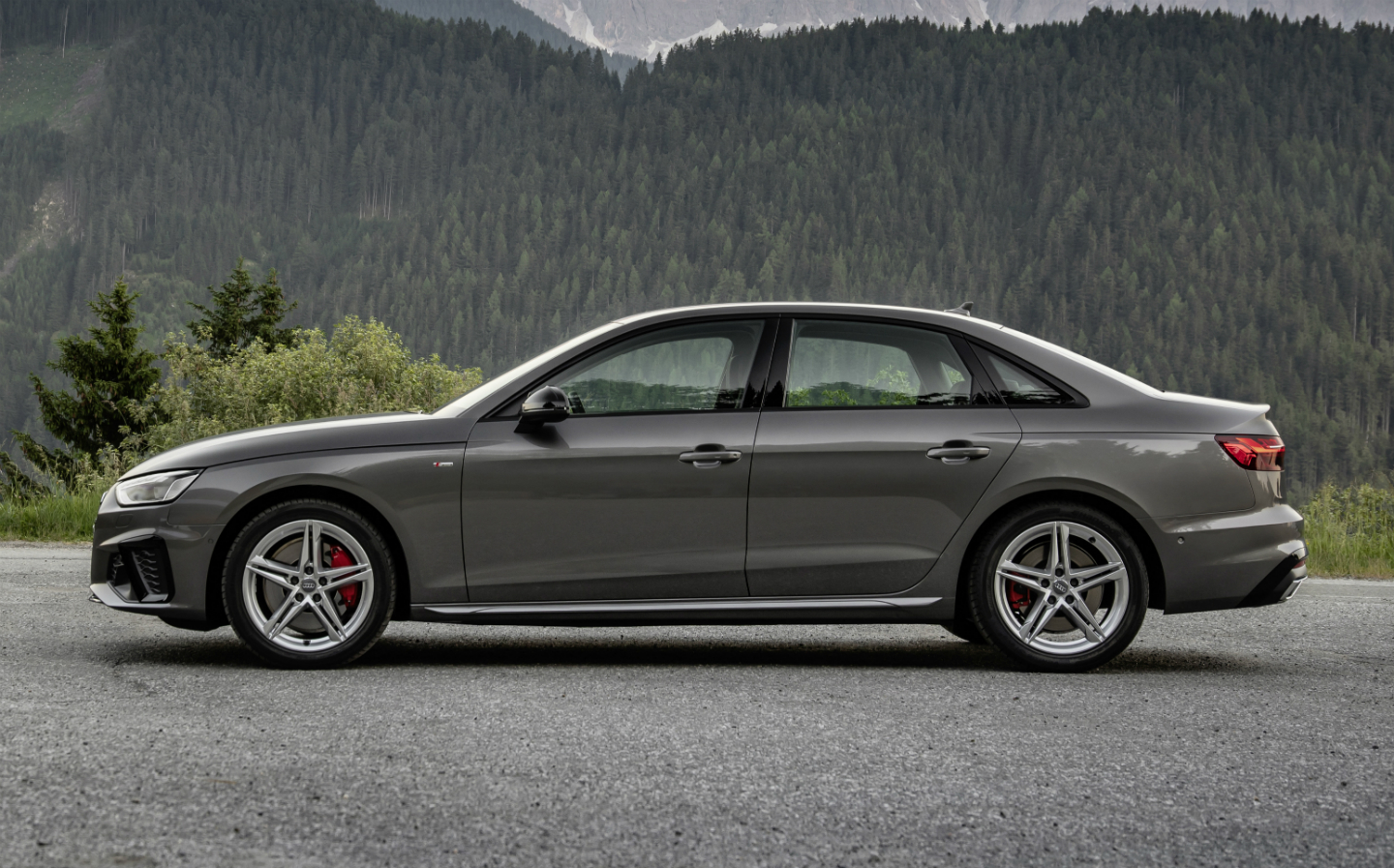 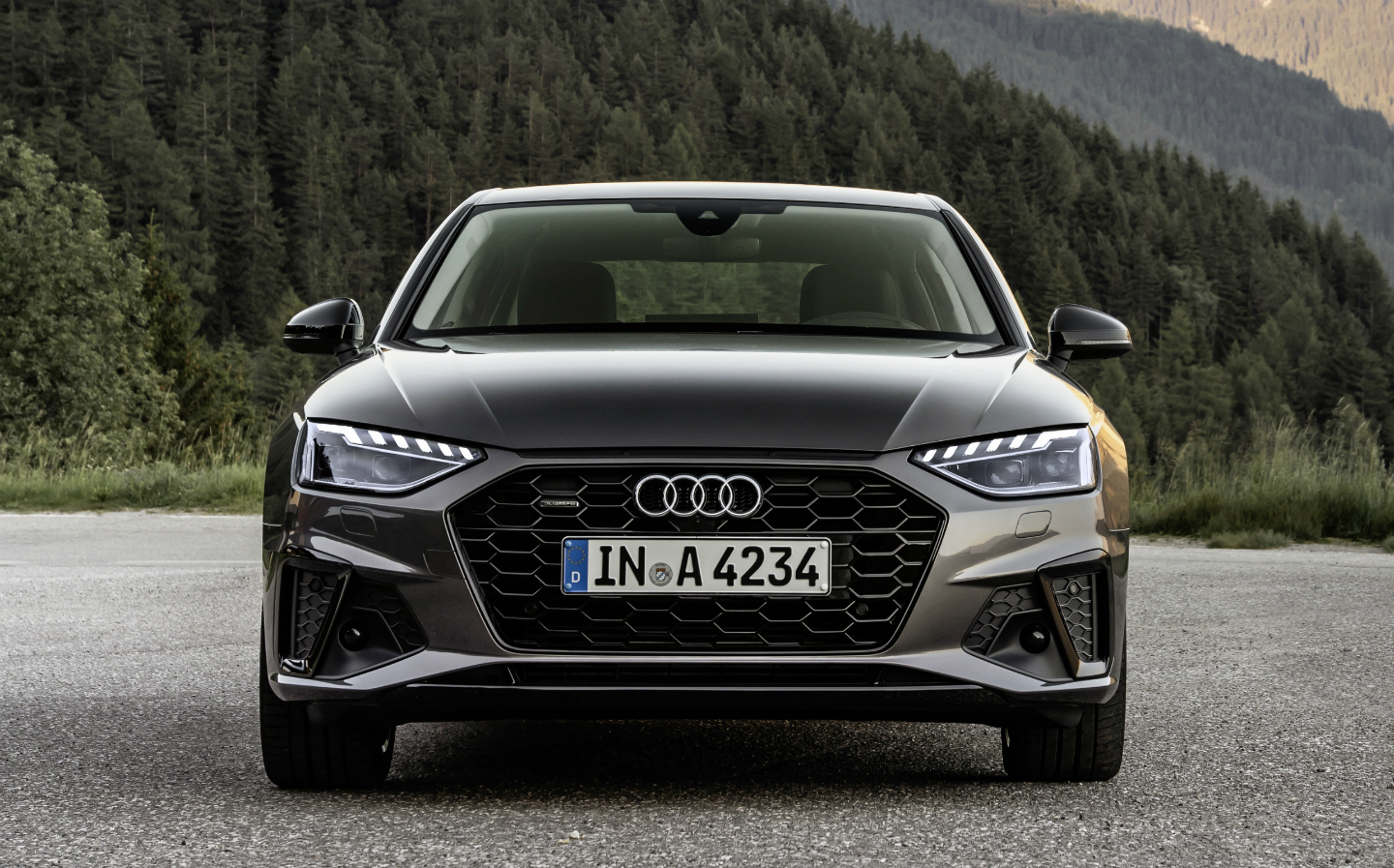 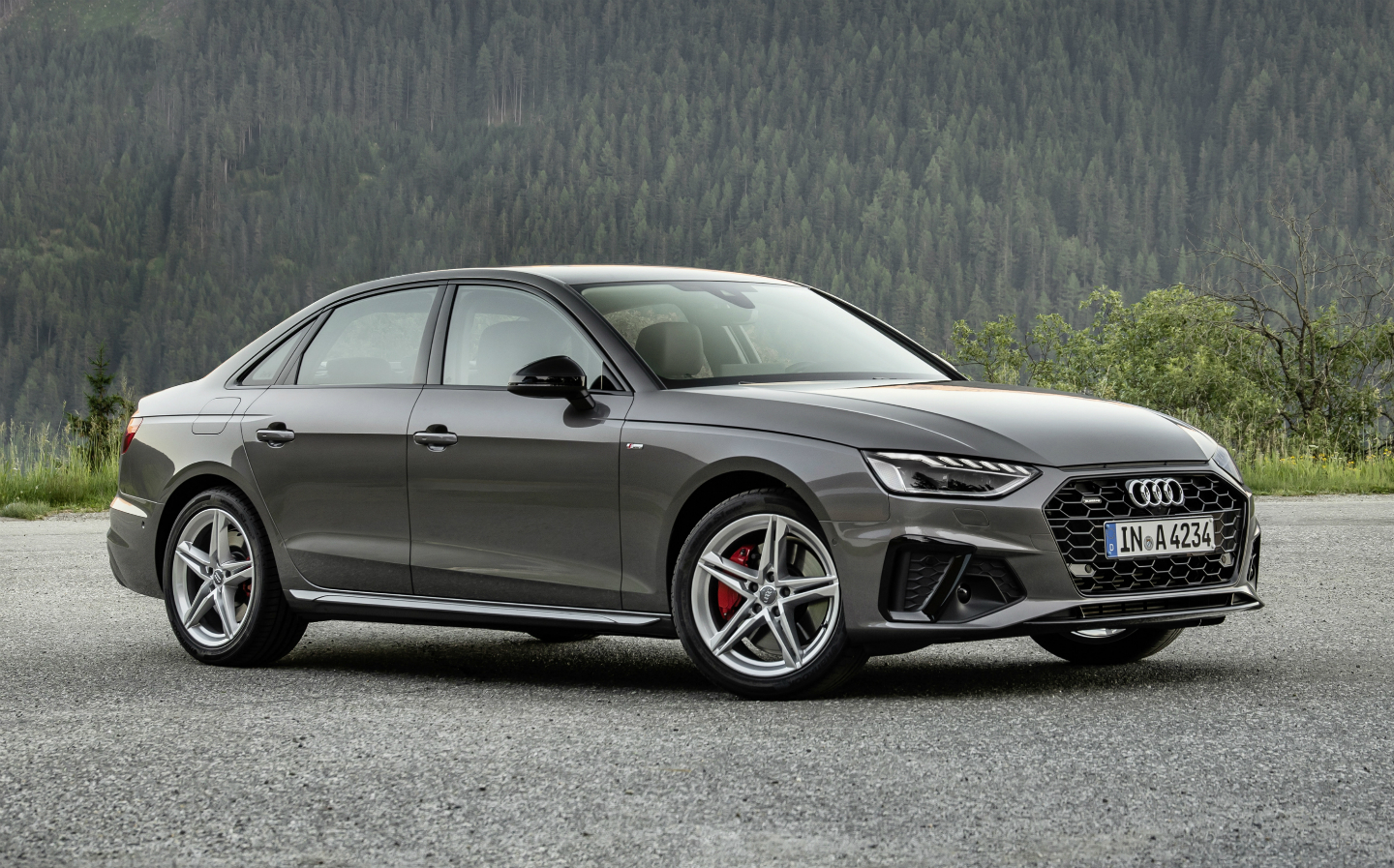 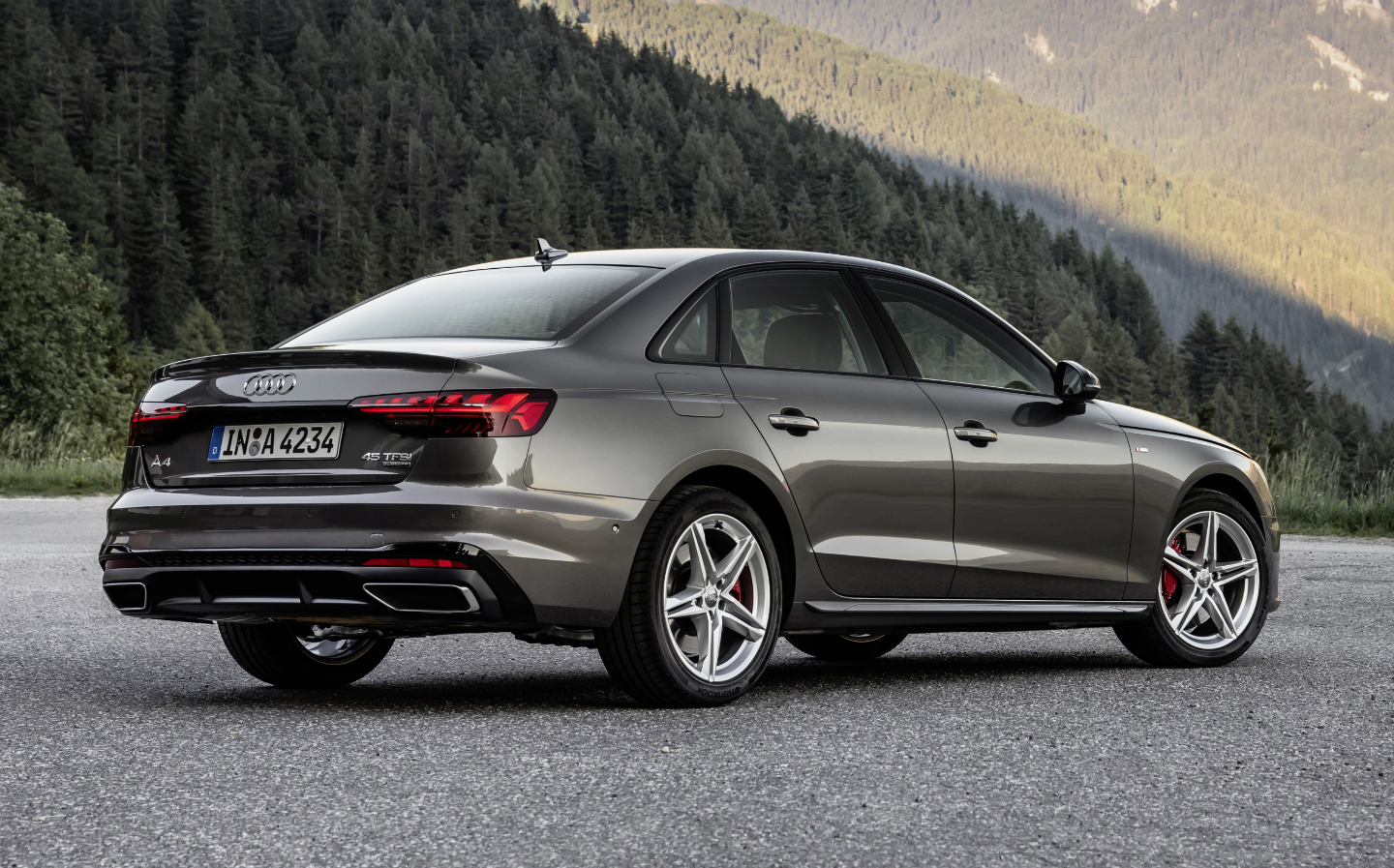 THERE ARE  few more competitive automotive battles than the one going one between junior executive saloons in corporate car parks across the land. As things stand, if you value a great drive, you’ll want a BMW 3 Series or Jaguar XE. Prefer an interesting cabin and cushy ride? Mercedes C-Class it is. But for the best engines and interior quality, you should be hanging your spare shirts on the rear grab handle of an Audi A4.

To keep pace with its rivals, though, the Audi A4 has had a facelift for 2019. This includes not only the A4 saloon we’re focusing on here, but also the more practical A4 Avant estate, chunky off-road-biased A4 allroad and sporty S4, the latter getting a punchy 347hp 3-litre V6 diesel and 48-volt mild-hybrid tech for the first time.

It’s fair to say that the latest A4 in all its guises, despite this facelift, is more restrained inside and out than its rivals in terms of design. There are new LED lights and bumpers front and back, a flatter single-frame grille and bigger air intakes, but the A4 is still less in-your-face than the BMW or Mercedes.

Inside the A4 remains simple, intuitive to use and stylish. It’s not quite as sporty as the Jaguar XE’s wraparound design but the Audi’s numerous aluminium and soft-plastic trims look classy and feel absolutely bulletproof. No other car this size is quite as well built as the Audi A4.

Where the greatest strides have been made is in the area of infotainment. Every model now gets a bright, high-definition 10in widescreen display atop its dashboard, with DAB radio, Bluetooth phone connectivity, built-in sat-nav, and Apple CarPlay and Android Auto as standard. Ultimately, BMW’s iDrive is slightly easier to use while driving but the A4’s system isn’t far behind.

You won’t have any trouble getting comfortable in the Audi A4’s front seats, either — there’s loads of head- and legroom, and plenty of seat adjustment as standard. Space in the back is very nearly as generous as up front, because there’s enough room for a six-foot-tall passenger to stretch out behind an equally lanky driver and more headroom than in the C-Class or XE.

The A4’s 480-litre boot is generous, too, being exactly the same size as in the C-Class and 3 Series and easily big enough to carry a couple of sets of golf clubs or a large pushchair.

There will eventually be a total of eight engine choices (three petrol, five diesel) for the A4, all turbocharged and most of which with a mild hybrid system to improve fuel economy. If you do the majority of your driving in town or don’t like the idea of diesel, then the 150hp 2.0-litre 35 TFSI is the best bet. It easily has enough power and low-down pull to haul the A4 along in most circumstances and is exceptionally smooth and quiet.

Not much has changed with the Audi A4 facelift. It remains the least exciting of these saloons to look at, but also the nicest one to be sat in

But, if you’re buying an A4 as a company car or often travel long distances on the motorway then you’re probably better off buying a diesel. In which case the 190hp, 2.0-litre 40 TDI is the better choice. It has an even more satisfying swell of torque low down in its rev range to helps with slip-road sprints, and if driven carefully will return fuel economy in the mid-forties.

The Audi A4 is still an easy and comfortable car to drive in town, doesn’t wander about in its lane on the motorway and there’s very little wind and road noise heard inside at higher speeds.

Where the A4 remains not as good as a 3 Series or XE is when pushing hard on country roads. Sure, the A4 grips hard (especially in all-wheel-drive quattro form) and has precision to its steering, but the BMW and Jaguar are more communicative and ultimately more fun on the right road. [We’ll have to agree to disagree, Rory — Ed.]

So, not much has changed for the A4 post-facelift. It remains the least exciting of these saloons to look at, but also the nicest one to be sat in — even more so, thanks to that improved infotainment. For driving thrills, there are better options, but for a combination of quality, comfort and quiet at this money, you’ll struggle to do better