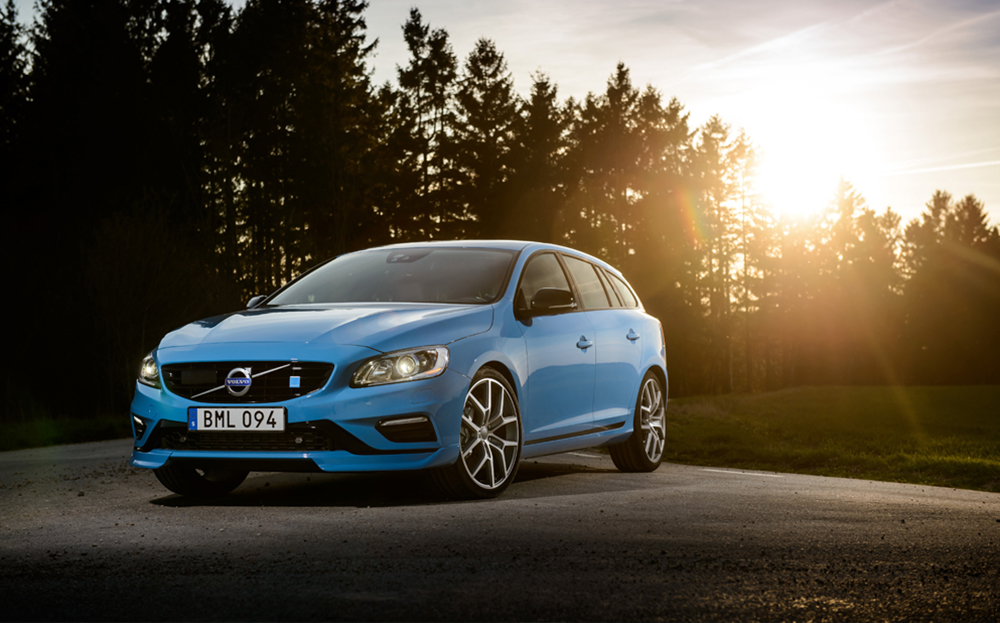 WE GENERALLY associate Volvos with the therapeutic calming of middle-class neuroses, with careful neutralisation of the road’s many dangers and with the ergonomically correct carriage of infants and labradors. This is a brand that has traded hard on a reputation for safety and good sense. It’s a well-known fact that if you attempt to drive a Volvo without fastening your seatbelt, not only does a buzzer sound in the car but your face automatically appears on “wanted” posters in police stations all over Sweden.

So the very idea of a Volvo estate designed to accelerate at warp speed, grip the tarmac like a long-lost brother and sling its way around corners with the obsessiveness of a bobsleigh on an ice run would be likely to strike one as a cultural anomaly — an Abba-ration even.

Of course this is to overlook Volvo’s distinguished history in motor sport. In 1994, to universally raised eyebrows, the company even put an estate car — the 850 BTCC — onto the track. Those crazy Swedes! Yet somehow images of honkingly mad racing projects are not what first spring to mind when the word Volvo comes up — or at any rate, not nearly so quickly as images of someone carefully reversing an XC90 into a parking space at Waitrose.

The very idea of a Volvo estate designed to accelerate at warp speed, grip the tarmac like a long-lost brother and sling its way around corners with the obsessiveness of a bobsleigh on an ice run would be likely to strike one as a cultural anomaly

Here comes Polestar, though. An independent company based in Gothenburg, it has partnered Volvo in motor sport since 1996. During this time it has dreamt up a couple of amusing but implausible concept cars and supplied some retro-fit tuning packages. I have never met a Volvo owner who has retro-fitted a Polestar tuning package, but I am reliably informed that it has happened — and more than twice.

Now, though, the plan is for Polestar to step up and become to Volvo what Alpina is to BMW — official reinterpreter of its cars by appointment to speed nuts. Here, accordingly, are Polestar’s first road-ready models — a mixed batch, limited to 750 cars, of S60 saloons and V60 estates, although in the UK we will get just the estate, and only 125 of them.

Ever imagined a V60 burning up the back straight with flames fanning out of its exhaust pipes? Possibly not. But now you don’t have to because Polestar will do the imagining for you. The six-cylinder T6 engine has been given a new turbocharger and intercooler to up its power from 302bhp to 345bhp, and this is hooked up to a recalibrated six-speed automatic gearbox with a manual Sport override. 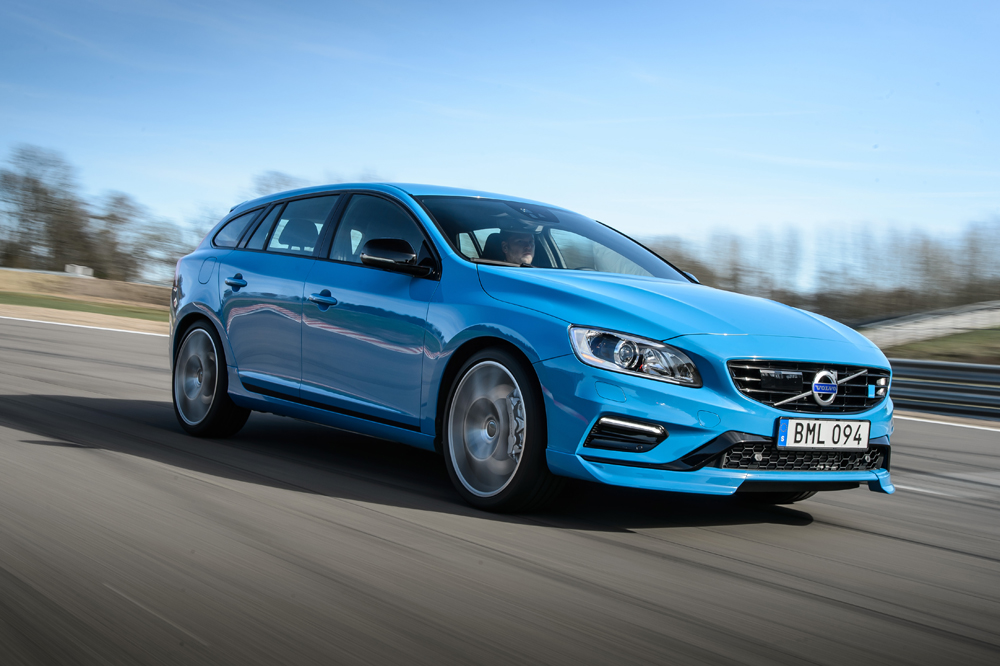 The car gets new aerodynamic spoilers, 20in alloys, thunderously imposing brakes, four-wheel drive and a carbon-fibre reinforced front brace to sharpen the steering. There is also a bespoke 2.5in stainless steel twin-exhaust system and posh Ohlins shock absorbers to swallow the impact when you clip the kerb.

These beefy upgrades are modestly announced to the world by the square, ice-blue Polestar badge, which looks like a fridge magnet, and by an engraving of the brand name around the rims of the tailpipes. True, our test models gave a further clue by being uniformly painted in yob-heaven turquoise but you could go with quieter shades of black, white or silver and nobody would have the faintest idea that you weren’t a perfectly ordinary person. (Paint is the only variable in the package, which if nothing else removes choice paralysis from the buying process.)

Inside, the seats are padded to support all major lower-body organs and avoid any incidents of “rally driver’s kidney”. The steering wheel has been clad in grippy nubuck. The centre console gets a slab of carbon fibre for its fascia because that’s always how you know it’s a racing car, right? Meanwhile, in the only unsure touch, the gearlever features a somewhat cheesy clear plastic knob that could have been the product of an afternoon with a Plasticraft paperweight-making set.

The fun begins with the engine noise: a taut but sociable burble. Slap it into Sport mode and a small, tightly rehearsed brass section starts up in the exhaust pipes and horses bolt in nearby paddocks. (This actually seemed to happen.)

You are now at liberty (and this really doesn’t seem very Volvo-like) to attack the road using launch control: stand on the brake and the accelerator simultaneously, give the engine three seconds at regulo five, then come off the brake and get jetted to the horizon, clinging to the steering wheel while your eyeballs try to swap places.

In fact, in the V60 the launch experience is a little underwhelming — well-mannered and electronically supervised. Then again, a) using it won’t affect your warranty and b) Polestar did keep insisting that this is not, first and foremost, a track car: it’s an everyday, all-weather family transporter that just happens to fly like a bat when you put your foot down.

Slap it into Sport mode and a small, tightly rehearsed brass section starts up in the exhaust pipes and horses bolt in nearby paddocks.

It certainly works on Sweden’s winding and entertainingly narrow country roads. Unlike with many manual override systems the box stays with the gear you select, not intervening on your behalf, so you really are calling the shots, for better or worse. The springs are 80% stiffer than in the conventional R-Design model, so you are ready to be shaken out of your wits, but the ride is fabulously well cushioned and undisturbing.

You end up cheerfully twisting the wheel into corners without fear of landing upside down in the adjacent field, not something I recall ever feeling confident enough to do in the battered V70 estate that I used to own. 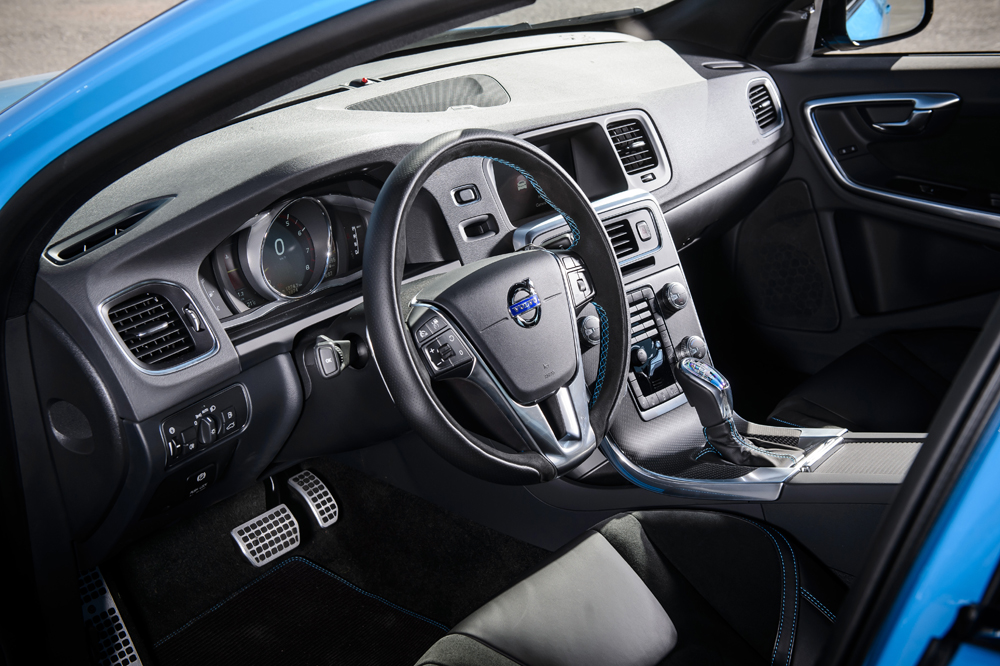 Polestar should be congratulated on producing a high-performance car that isn’t expressly designed to compress your spine and leave you 3in shorter when you climb out of it. Furthermore, as the traffic on the roads grows ever-more samey, the company should probably be congratulated just aswholeheartedly on making a high-performance car that isn’t German.

On which topic you will notice that the V60 Polestar is more than £8,000 costlier than a BMW 335i Touring M Sport and over £9,000 pricier than an Audi S4 Avant. The question, then, may not be whether you dare to be different, but whether you can afford to be. Lucky you, though, if you can.

For Luxurious interior; sure-footed handling; good-sized boot Against You will be tempted by the faster and more desirable RS 4 Avant

Search for and buy a quality used Audi S4 on driving.co.uk

Search for and buy a quality used Mercedes C 63 AMG on driving.co.uk