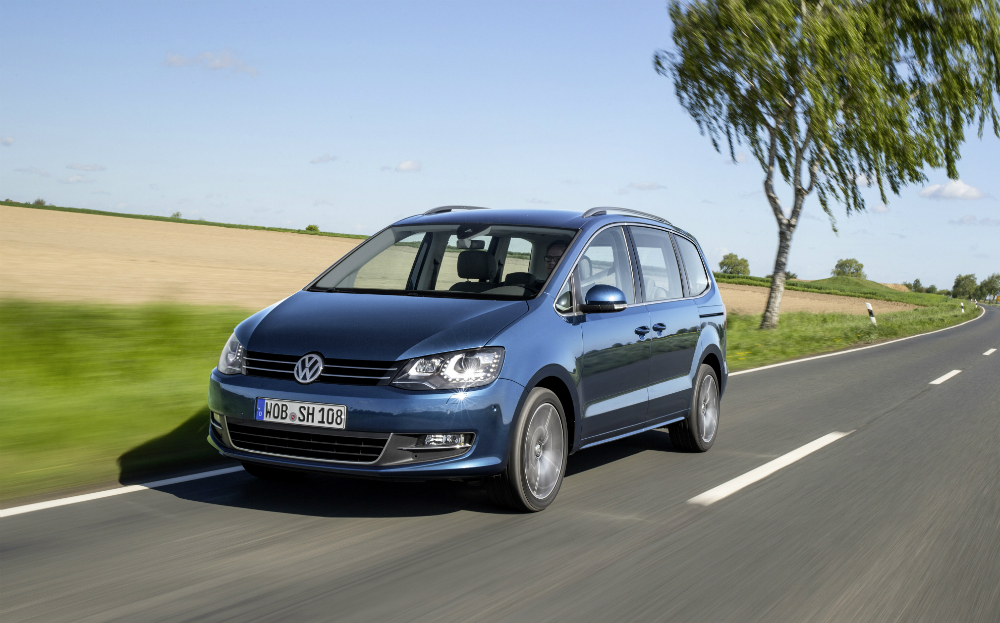 Volkswagen Sharan at a glance

FOR DRIVERS of a certain age, owning a vehicle that can comfortably transport six hyperactive children high on sweets and cakes back home from a birthday party is more pleasurable than having a stonking V8 engine behind their heads and a Ferrari badge on the bonnet.

The neighbour may proudly display their freshly waxed Ferrari on the driveway but has it got six seats with Isofix mountings, five of which can quickly and easily be folded flat to create a cavernous boot space? No way, Jose.

It is for such reasons of unrivalled practicality that the Sharan has proven so successful for Volkswagen since its launch in 1995, with nearly 67,000 finding homes in the UK – a healthy figure for a type of car that hasn’t been fashionable at the best of times.

The latest, 2016 Sharan isn’t any more fashionable than its predecessors and still has the chunky, Lego styling that marks out most people carriers as beasts of burden. As part of a subtle revamp for 2016, there are new LED rear lights and a tweaked range of optional alloy wheels. 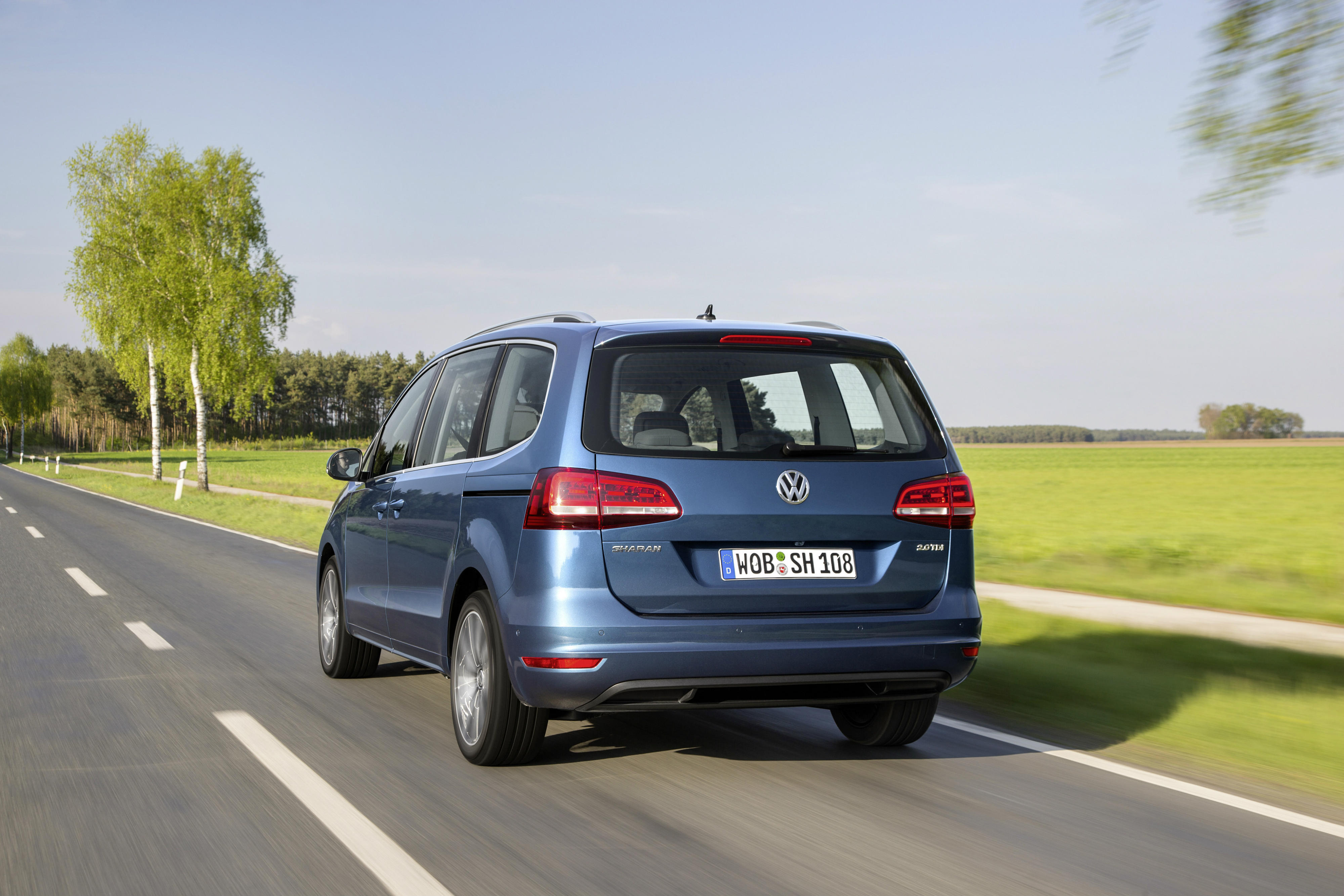 Of more significance to drivers who want the ultimate in practicality and economy are the changes that have occurred inside and under the bonnet.

A new range of turbo-petrol and diesel engines now powers the big Sharan, all of which meet Euro 6 emission standards, meaning it won’t fall foul of ultra-low-emission zone charges, and will sip around 15% less fuel, according to VW. The range starts with an entry-level 2-litre TDI with 113bhp and moves up to a 1.4-litre TSI and a 2-litre TDI that both develop 148bhp. At the top of the model line-up is a 2-litre diesel that develops 181bhp.

All those can be mated to a six-speed manual gearbox or a DSG automatic with the same number of cogs and steering-wheel-mounted paddles for manual changes. 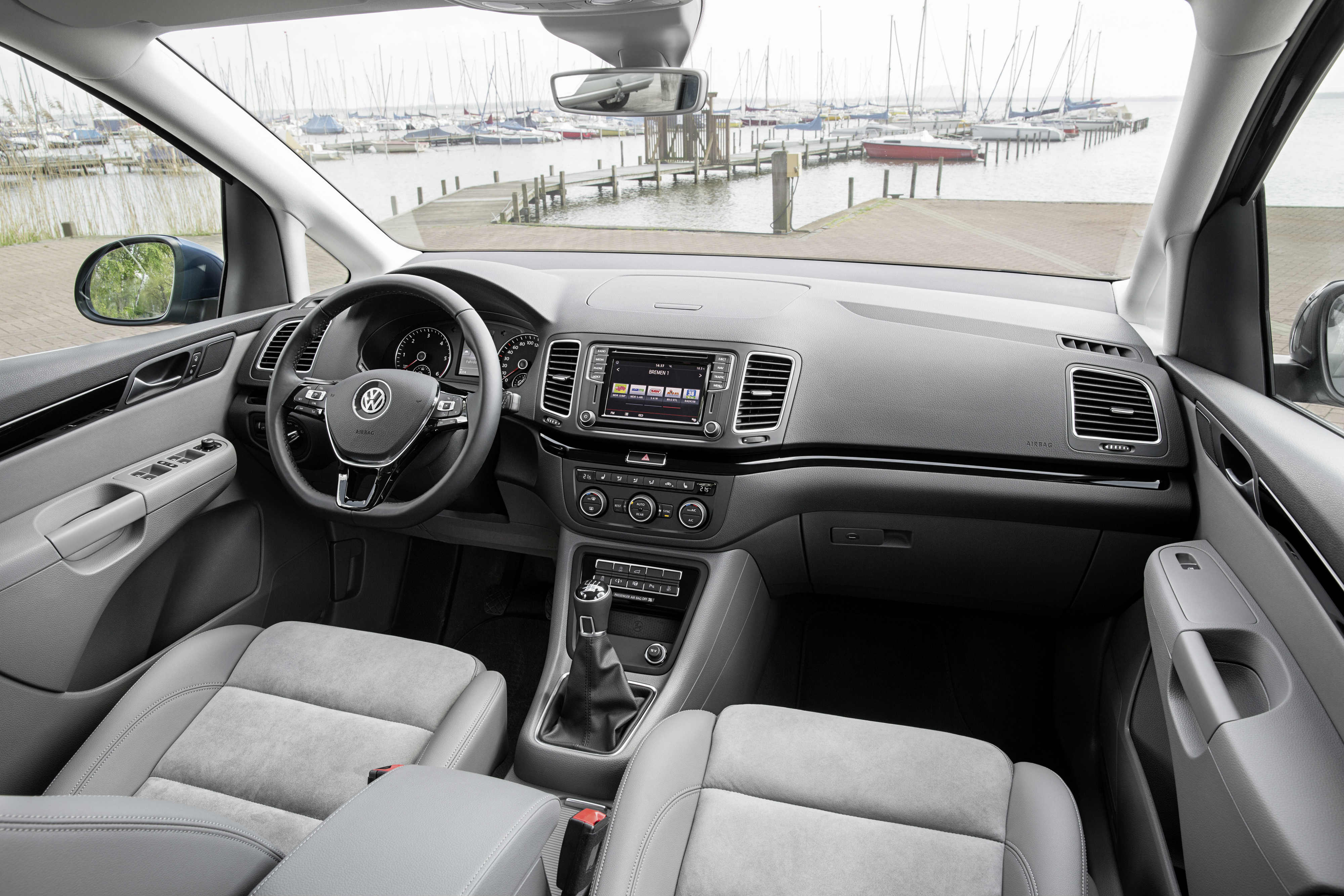 The mid-range diesel is likely to be the bestseller in the UK, as it blends acceptable performance with reasonable fuel economy (56mpg on the combined cycle), but there is something wickedly childish about spinning up the front wheels in the most potent diesel version; with bags of torque the engine easily overwhelms the front tyres’ grip at the traffic lights.

The Sharan is never going to set off the “fizzy feeling behind man parts”, as James May likes to call it, but it is an adept cruiser, quiet at speed and with suspension that treads the right line between supple and controlled. It can be specified with Volkswagen’s Adaptive Chassis Control function, which stiffens the suspension at the press of a button for a more sporty drive. During our time with the car it only really served to make the cracked road surface more noticeable to passengers, but if you regularly load the car with lots of passengers, luggage and bikes, or tow a trailer, it should keep it more level and stable.

On a more twisting road, the Sharan is acceptably nimble. OK, the steering could do with lots more feedback, plus it doesn’t spring back to the straight-ahead position after applying lock, and the chassis doesn’t roll and wallow. 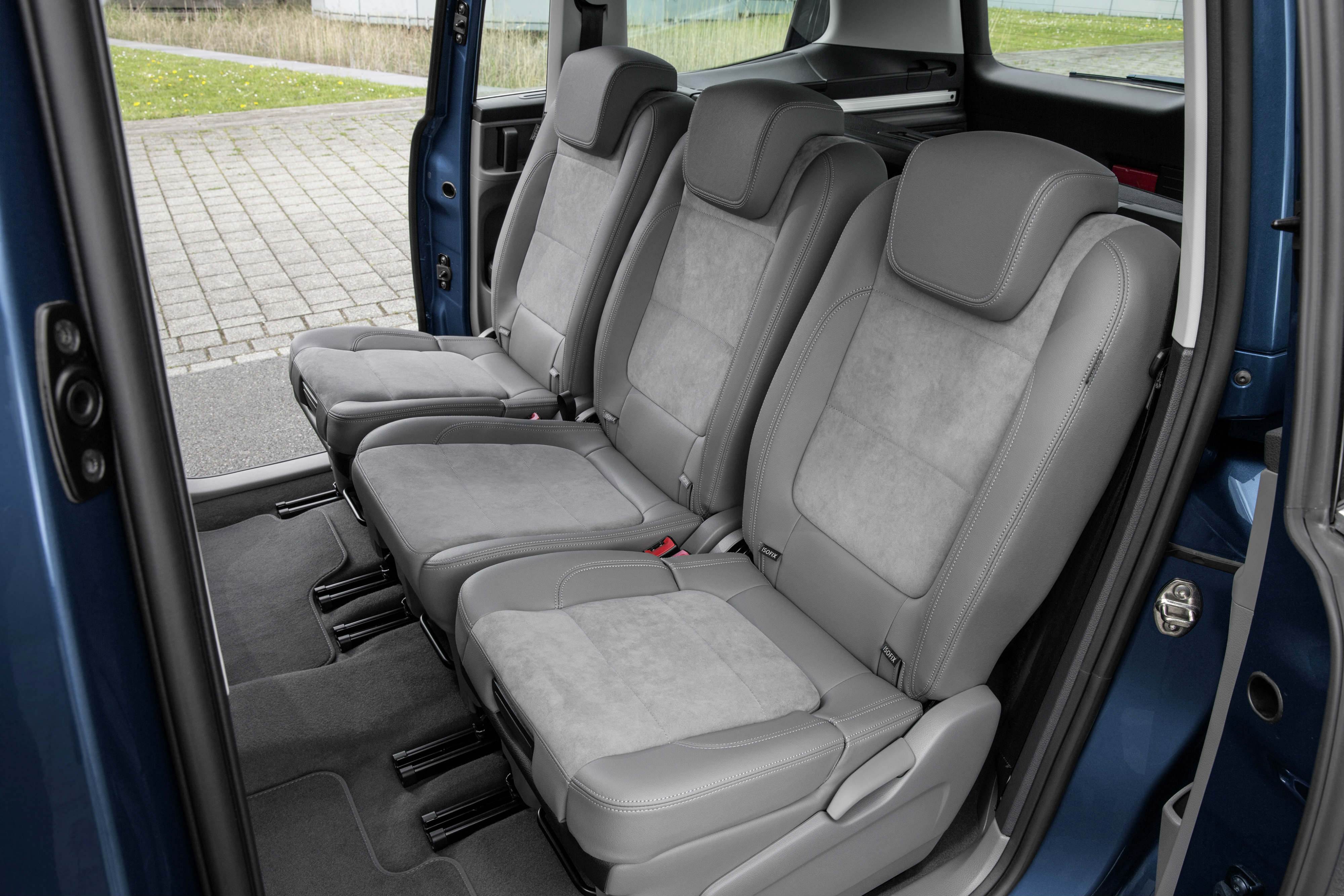 The interior fit and finish has been improved to offer not only more functionality but also levels of luxury that you wouldn’t normally associate with a trusty family workhorse.

All UK cars come as standard with seven of VW’s patented EasyFold seats (they really are easy to fold), and with all five back seats lowered there’s a staggering 2,297 litres of space, ideal should you decide to become a part-time tradesman.

The interior is easy to get to: as before, the car has two large sliding rear doors, which can be electronically operated as an option, and they give the Sharan an advantage over large MPVs with conventional back doors. Other neat touches include back seats that can be transformed into child-friendly booster seats, securely mounted iPad holders and plug-in coolboxes. 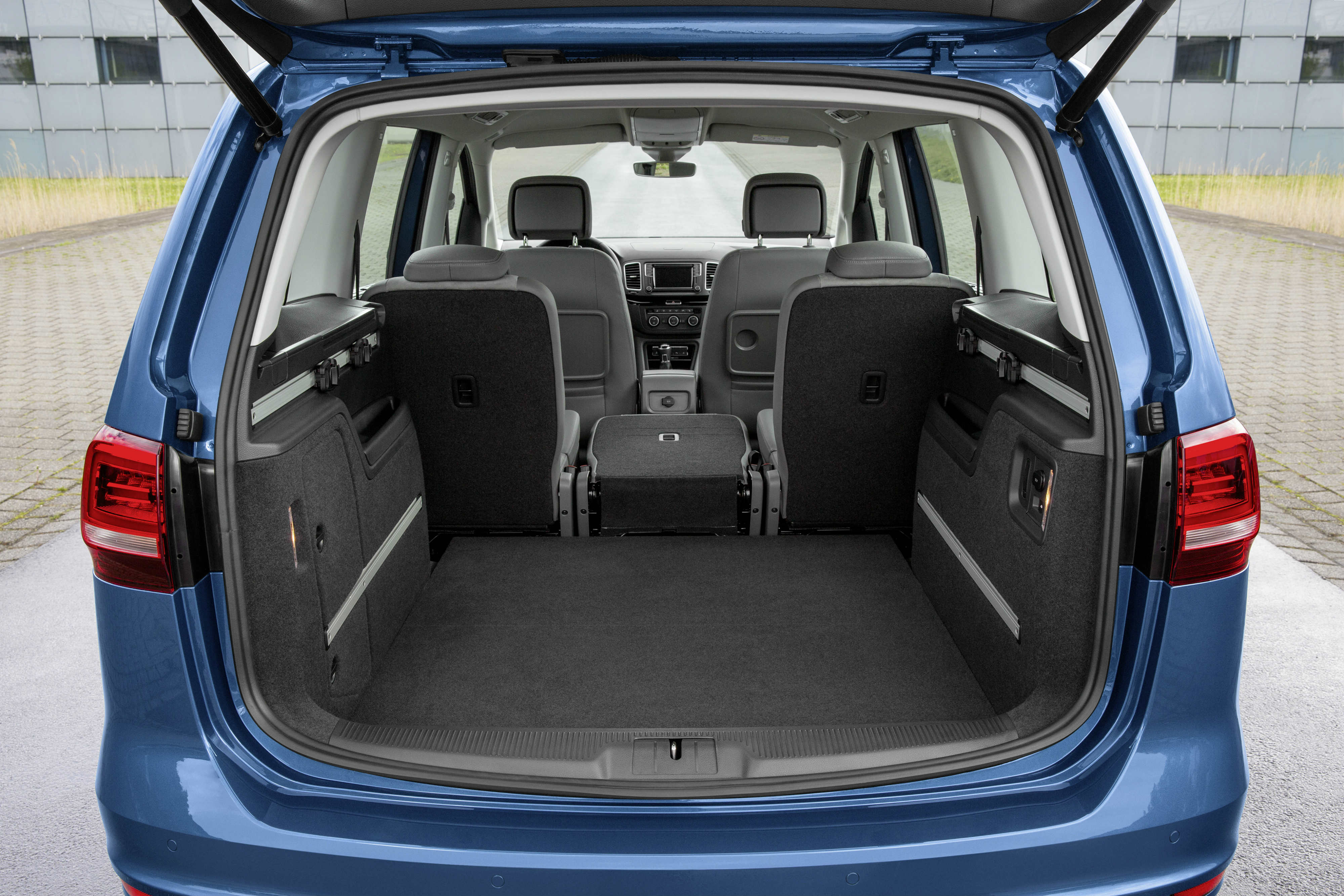 Volkswagen has thoroughly refreshed its infotainment systems and improved touchscreen units now come as standard across the range. The 7in displays are Android Auto and Apple CarPlay compatible, meaning you can plug in your smartphone and use official apps such as Spotify, Google Maps and Audible audiobooks on the move, as well as messaging and calls.

Range-topping SE-L models start at a heady £33,360 but come with Front Assist braking and Adaptive Cruise Control as standard, which is a first in this class, as well as boasting Alcantara upholstery and Discover Navigation with VW’s own Car-Net smartphone apps, which can, for example, locate the nearest restaurant or let the driver remotely heat or cool the car from a mobile device. (The cheapest  Sharan is the 1.4 TSI S petrol model, which costs £25,500.)

This level of interactivity and improved cabin quality ensure the latest Sharan is a compelling proposition compared with rivals such as the Ford S-Max.
Granted, the similarly priced Galaxy is slightly more engaging to drive, the Seat Alhambra cheaper and the Citroën C4 Grand Picasso a more handsome if smaller thing, but the Sharan remains top of its class in terms of build quality, interior space and on-board gadgetry.