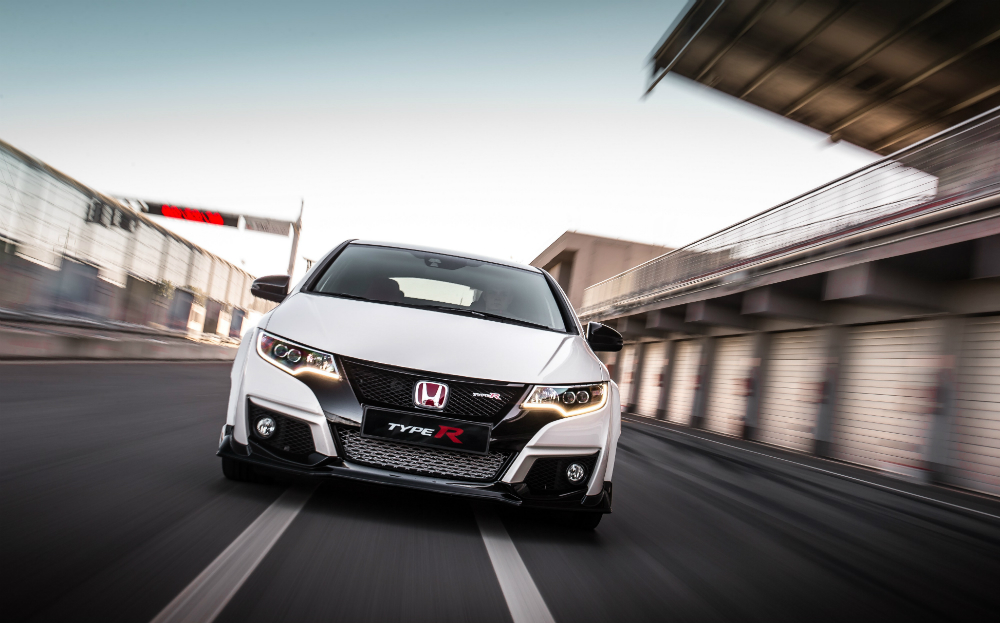 IF THE simplest ideas are often the best ones, it’s little wonder the hot hatchback has been so warmly received. Take the most popular type of car – the hatchback – insert a powerful engine and beef up the suspension and brakes to cope with the added performance while keeping the price of the car affordable.

In 1975 there was just the one such car, a Volkswagen Golf with 108bhp and a GTI badge on its boot. Today there are more than a petrolhead could count on their fingers and toes, with levels of performance that would give even a perma-tanned Ferrari driver pause for thought. Yet the current VW Golf R – the fiercest version – is a car that’s as suited to the school run as to Brands Hatch: it sets the standards of versatility to which others aspire.

Honda hopes to change that. After a hiatus of five years, its Civic Type R is back – and the Japanese company hopes to persuade drivers to embrace it with the kind of enthusiasm Kim Kardashian has for self-publicity.

The Civic Type R is “the world’s most keenly anticipated hot hatch”, Honda says. It’s quite a claim, given that the hot hatch market is a truly international game, with allegiances divided between car makers from Italy, France, Germany, Japan and Spain, not to mention Britain.

Undoubtedly, Type R cars have come to enjoy something of a cult following. The first Honda to wear a Type R badge was the NSX, in 1992. That was a rare mid-engined sports car that rivalled the Porsche 911, but it was the Integra Type R, of 1995, that cemented the appeal of Honda’s most sporting cars. It was an innocent-looking four-seat coupé that took the world by surprise; the car was as lean and focused as Bruce Lee, and the attention to detail that went into the engineering of the body structure and highly-tuned 1.8-litre VTEC engine was the stuff of most engineers’ dreams. 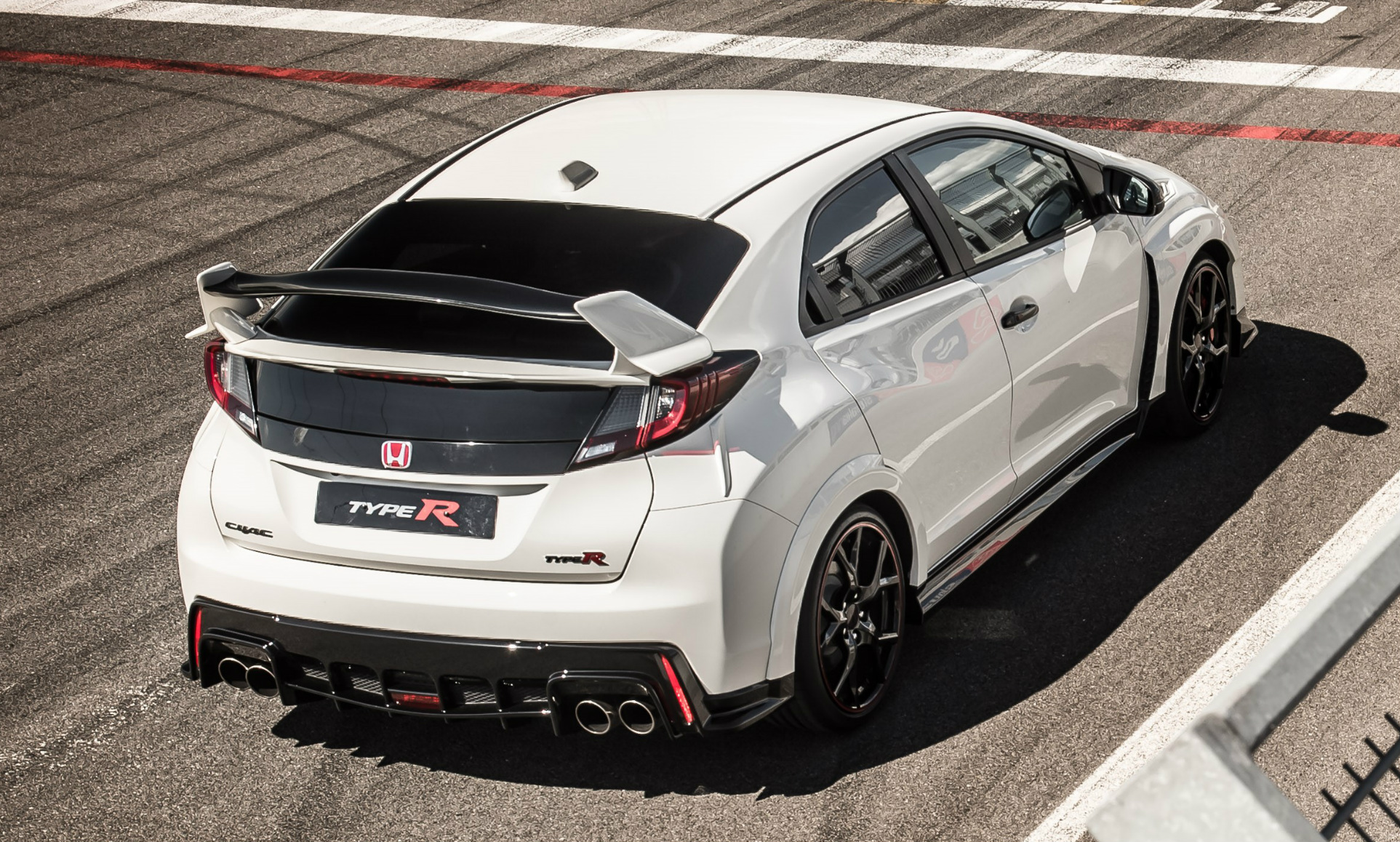 The first Civic to be given the Type R treatment hit the road in 1997. Two further versions followed, and all featured characteristically high-revving, naturally aspirated four-cylinder engines, a front-wheel drive chassis and an interior that was simple and sporty in equal parts.

Much has changed for the new, fourth generation Civic Type R. For starters, it’s the first model to feature a turbocharged engine. This was an inevitable evolution if Honda wasn’t to be left standing at the starting grid, given the race between car makers for ever-increasing sums of horsepower and thrust (and efficiency) from a hot hatchback’s engine.

It’s a 2-litre, four-cylinder direct-injection petrol unit with VTEC variable valve timing, and on paper the figures talk the talk; this is the most powerful front-wheel drive car of its kind, with 305bhp. But in some respects it’s a reformed character after Type R engines of old; there’s lots of torque from low in the rev range and the rev limit is nearly 2000rpm lower than in the four-cylinder motors of years gone by.

In old Type Rs, drivers would have to wait until somewhere between 5,500rpm and 6,000rpm before their engines would wake up and race, screaming like a banshee, all the way to as much as 9,000rpm. 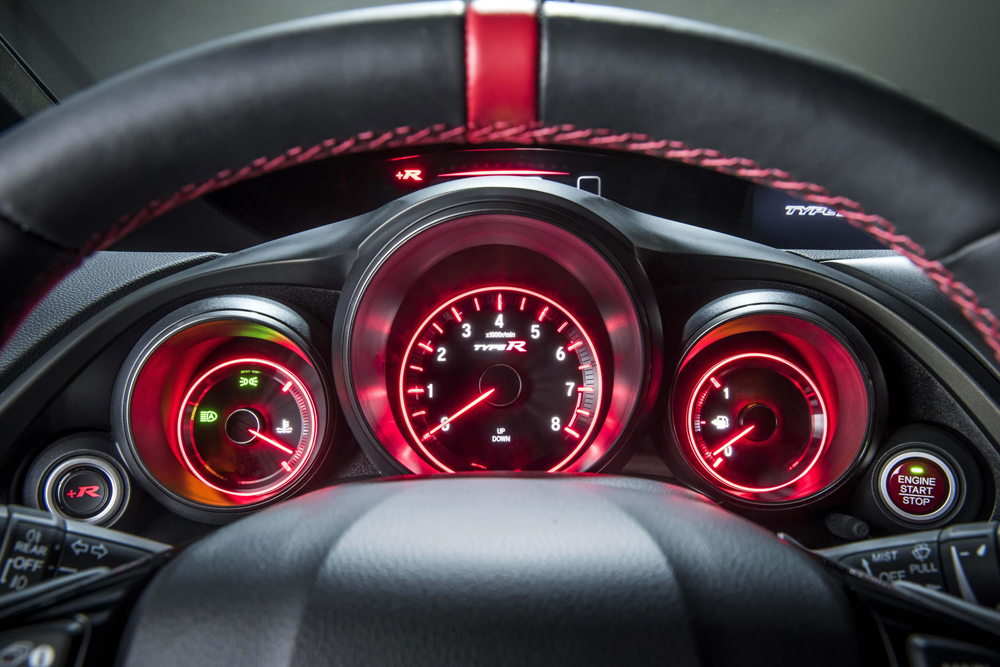 What’s more, this is the first Type R to feature an electronically adjustable damping system and a selectable “+R” driving mode, which intensifies the performance.

And then there’s the styling. Where a Golf R treads a fine line in subtlety, the Honda wants the world to know that its driver is seriously intent on getting away from the traffic lights before anyone else. “Try me,” it growls.

There are black-painted alloy wheels with contrasting red rims, a jutting front spoiler, also in black with a red stripe running around it and a double-decker rear wing much like the sort of affair found on the back of a British touring car.

It will divide car buyers, for sure. One critic we came across told us it looked as though it had been driven through a branch of Halfords and collected all the spare parts along the way. Another suggested it had been designed by a seven-year-old Top Gear fan. Not the aerodynamics, though: intakes in the floor channel air the length of the car, creating a Venturi effect and sucking the car to the ground at high speed. 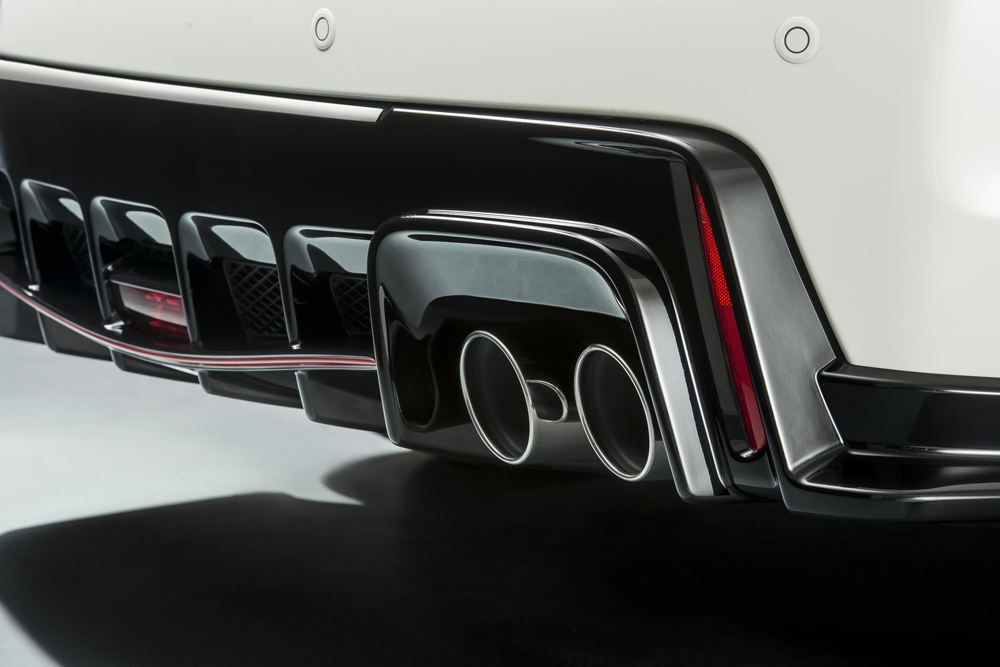 Make no mistake, this is a serious little car aimed at grease monkeys who can recite, off the top of their head, the top 50 road-car lap times of the Nürburgring (it’s 7 minutes and 50.63 seconds for the new Civic Type R, since you ask).

Can it live up to its own hype, though? Well, no doubt about it, the performance is impressive. Floor the throttle and the engine responds with vivid acceleration, pinning driver and passengers back into their seats.

Given a perfect racing start, it will scorch its way from standstill to 62mph in 5.7 seconds, just half a second slower than the Golf R, which has the advantage of four-wheel drive to improve traction. And with a full head of steam, the Honda can power all the way to a heady-sounding 167mph. 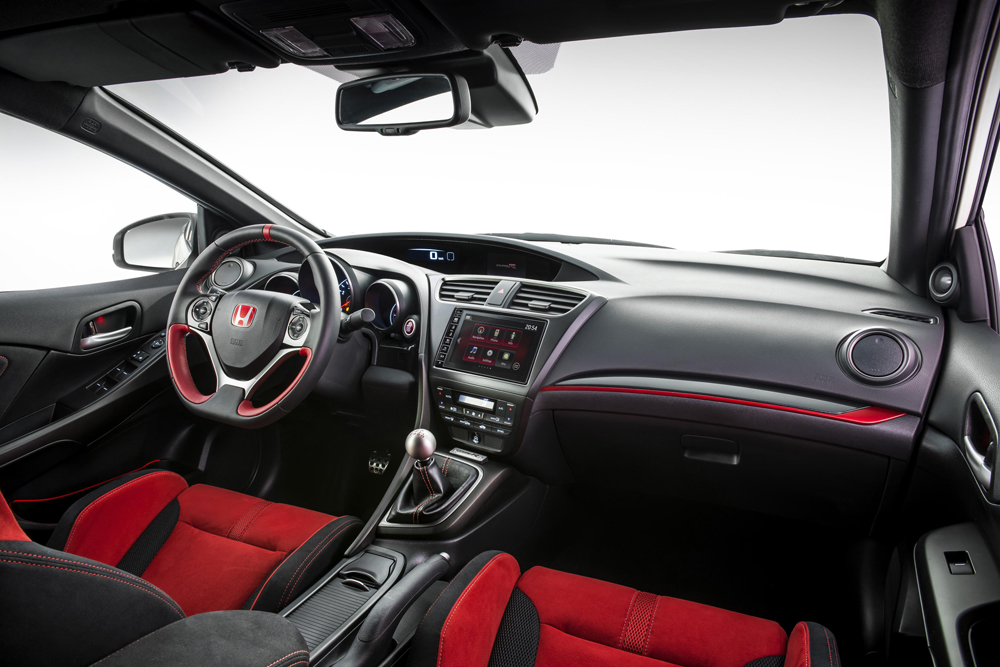 And then there’s its smoothness – or lack of. Past VTEC engines felt as though they relished being flogged by an enthusiastic driver, whereas this new unit has a gruff resonance accompanied by all sorts of whistles and hisses from the turbocharger, none particularly tuneful.

Its sheer speed is matched by its roadholding. It clings to the road like a dog holds on to a stick, and the Continental tyres – new ContiSportContact 6 – allow higher cornering speeds than even the four-wheel-drive Golf R can handle. At times it feels like a racing car, so glued to the road are the tyres.

Eye-wateringly powerful brakes and a slick, short-throw, manual gearchange add to the impression that here’s a hot hatch that will embarrass plenty of expensive sports cars at a racetrack.

Part of the secret to this is the suspension and its adaptive damping, which gives a flat stance through bends, virtually eliminating body roll. But also helping is a good balance of grip between the front and rear axles and a limited-slip differential, which gives impressive traction out of a corner. 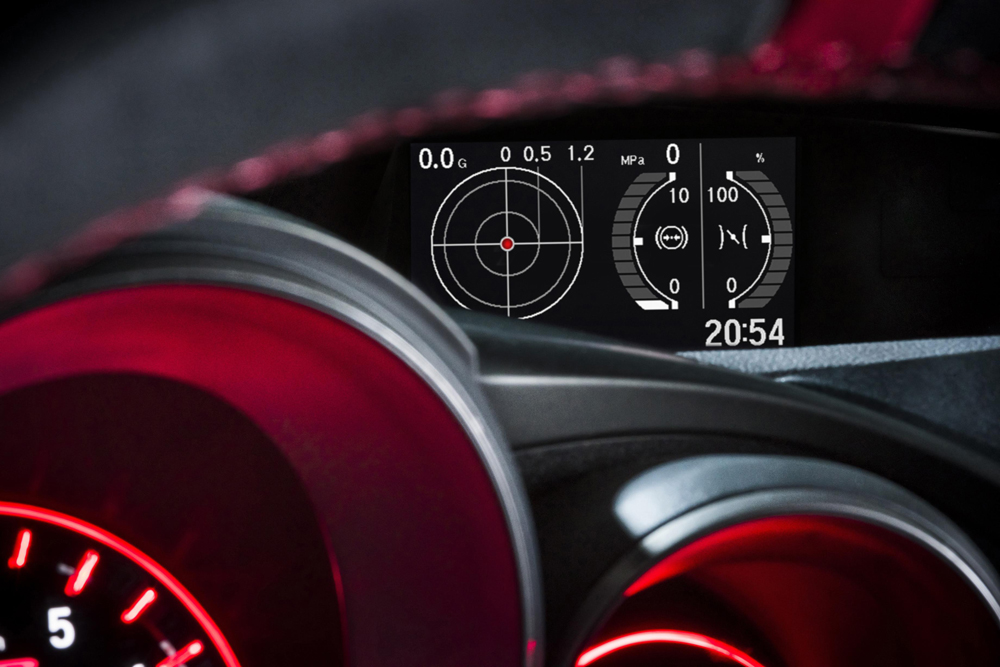 The ride is, unsurprisingly, firm on the road but not enough to shake your fillings loose. And the driving position, seat and pedal arrangement are all comfortable and keep the driver firmly in place.

What niggles it has are inherited from the normal Civic. The infotainment system is not the best, and it’s awkward for drivers of an average height to view the car’s speedometer. There’s no spare wheel, either; just a tyre-inflation kit. But the five-door body offers plenty of cabin space for four adults, the back seats fold down in one easy action and the large boot is deep and square-sided.

There’s an uneasy feeling that Honda is torn between the purist, engineering-led spirit of Type R, where less is more, and a marketing department that feels the need to offer all the gizmos found on competitor cars.

So, the car features a host of nannying driving aids that some may feel are at odds with the aim of delivering a raw driving experience.

Your view of the car’s cost will depend on how much you value that driving experience. Two versions are available – a standard model at £29.995 and a GT with additional equipment at £32,295. By way of comparison, a Golf R costs £30,820. 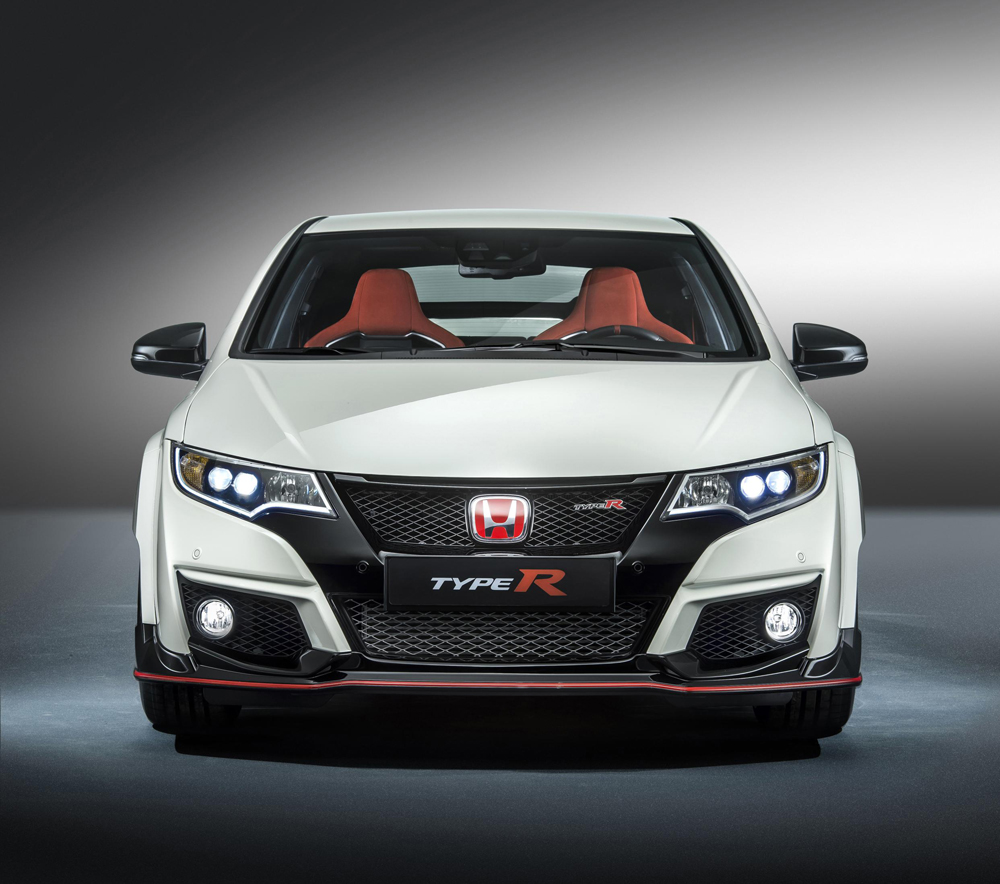 The Civic is the more extreme car and, if we’re being honest, quite wearing at the end of a long day at the office – in much the same vein as the Megane Renaultsport 275 Trophy. So it won’t have such widespread appeal as the Golf.

Nonetheless it’s a thrilling machine. If you’re the sort of driver who doesn’t welcome compromise, it’s got to be your hot hatch of choice.