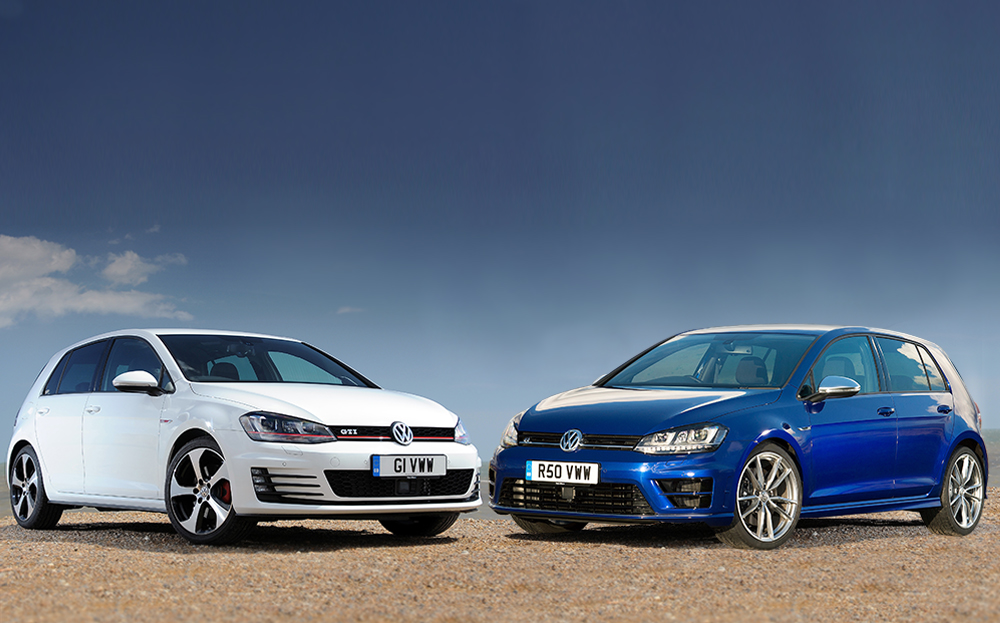 IF YOU want a hot hatchback that doesn’t make you look like a hooligan then, for close on 40 years, your number one choice has been the Volkswagen Golf GTI.

The current version sticks to the successful formula that has sold almost 2m models: stylish and subtle, but with fire under its bonnet. This time, however, the GTI faces its biggest rival yet; one that also wears the Volkswagen badge, is just as low-key looking but even quicker – and is also called a Golf.

Starting at £29,900, the Golf R is £3,770 more than the £26,130 GTI (or £45 a month on an average finance deal). The additional outlay buys an extra 79bhp and a four-wheel drive system. The last Golf R commanded a bigger premium and delivered a more modest performance increase. The question is: is it worth paying 14% more money for 37% more power? Does the R replace the GTi as the understated hot hatch of choice? It’s time to start those engines.

It doesn’t take long to see why the current GTI is so highly rated. Rev the engine and the exhaust rasps, the wheels scrabble for grip ‒ and you rocket up the road. Take a sharp bend and the Golf just grips and grips.

Its dynamic ability is partly explained by well-balanced suspension which, though it is on the firm side, absorbs enough of big potholes and bumps to keep the car resolutely on track, sticking to its line whether you’re travelling straight or turning.

If you pay Volkswagen an extra £995 for what it calls the Performance pack, it will endow the GTI with an additional 10bhp and variable suspension. It’ll also throw in a limited-slip differential, which comes into play when you’re really pushing on or when you take the car onto a track. It works by feeding more power to the outside wheel, to maintain the car’s line in a corner, even at high speeds.

The Golf R’s performance doesn’t feel as great a leap over the base GTI as you might expect, in the corners at least. The four-wheel drive system makes the car seem a little more stable but not by much. Put your foot down as you exit the turn though, and the extra 79bhp thumps you back in your seat. Unlike the GTI, there’s no wheelspin, since the power is shared by all four wheels.

The Golf R’s performance doesn’t feel as great a leap over the base GTI as you might expect, in the corners at least.

Fitted with the automatic DSG gearbox, the Golf R will go from 0-62mph in 4.9sec, compared with 6.5sec in the GTI. B-roads just go by in a blur and a howling soundtrack. Where the GTI is quick, its more powerful sibling feels like a missile.

But apart from the acceleration, the driving sensation is similar in both cars. The stiff body shell, surefooted cornering, electronic power steering and turbocharged engines mean that the driver doesn’t feel particularly connected with the experience. It’s like both Golfs started out as a computer game and were made into real cars. They are still fun to drive, but in a digital way. That’s why the automatic DSG gearbox (a hefty £1,415 option) with steering wheel paddles that allow you to change gear, seems to fit the car’s character better than the manual gearbox which, in any case, doesn’t provide the slick, precise feel that you would hope for.

Little separates the cars in day-to-day driving, whether in town or on the motorway. Both are available with three or five doors and have individual styling tweaks. The GTI has a red stripe across the grille and strakes on the two front corners. The R is more dramatic at the rear, with four exhausts and heavily smoked lights. Unsurprisingly, both cars are a little louder and have a firmer ride than the standard Golf, but not unbearably so.

More irritating is that both appear to have been tuned to deliver good fuel economy, even though few owners are likely to achieve it. At 30mph, the Golf R nags you to change up to fifth gear. Comply and you might get closer to the claimed fuel economy of around 40mpg, but you might as well be driving a ride-on lawnmower, so lethargic is the acceleration response. Rev the engine beyond 2,500 revs and both cars come to life but fuel economy nosedives; to around 22mpg on the Golf R.

At least the driving experience stops you looking around the cabin and wondering where your £30,000 has gone. Certainly not on leather seats, a £1,700 option. Sat nav? That’ll be £750. And if you want the car in any colour other than black or red (just red for the R), then you’ll also have to pay a premium. 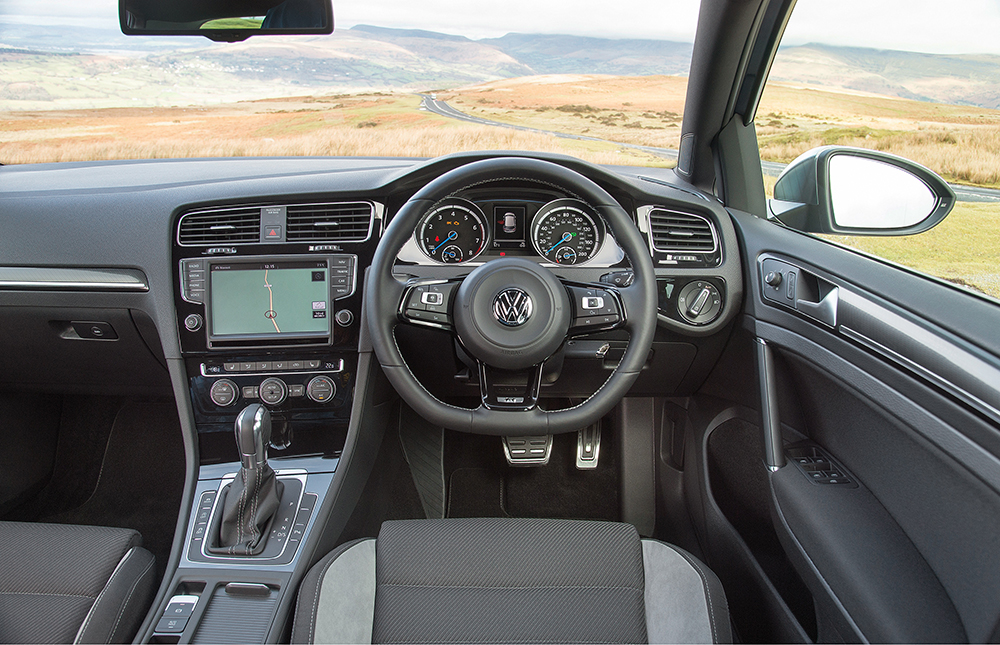 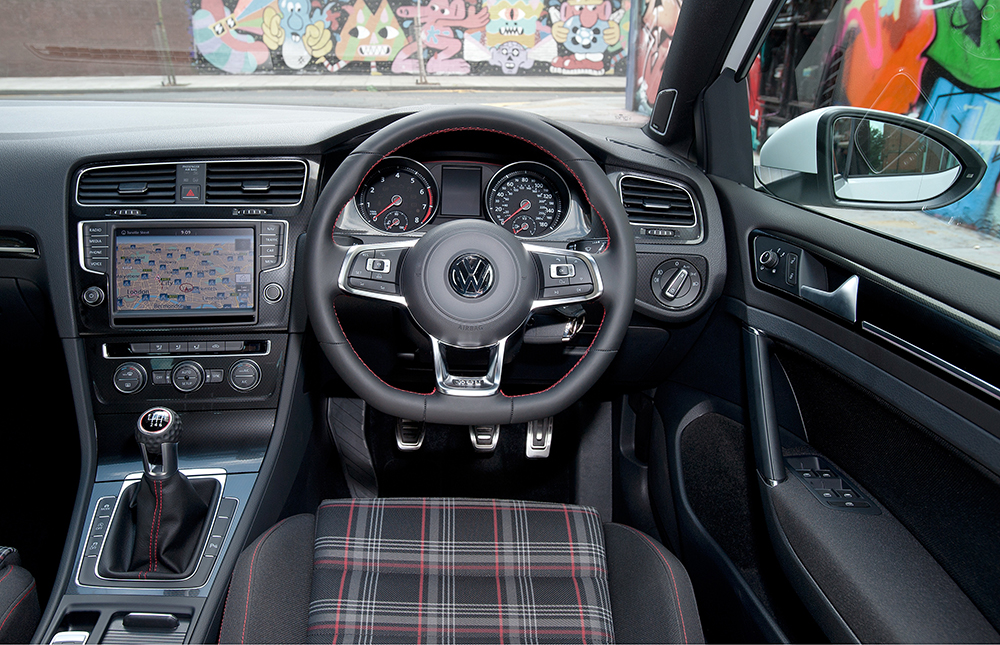 Were the Golf R a stripped-out sports car with a focus on saving weight, you could understand VW’s lack of generosity. As it is, you might feel that the VW accountants are laughing at your, not inconsiderable, expense, especially when you consider that the Audi S3, which is based on the same platform as the Golf and shares its four-wheel drive system and engine, has all of this equipment as standard for just £740 more. Beyond the VW Group there’s also the £30,835 BMW 135i to consider, which is more powerful.

It all points towards the GTI being the best option. The R is the sharper car but unless you’re going to regularly use its explosive performance, it is too expensive and too thirsty to trump the GTI, even if you choose to pay more for that car’s worthwhile Performance pack.

For most people, the GTI is zippy enough. It will push you back into your seat as you accelerate, it will cling on through corners, and it will look the part. It may have a bigger, heftier brother but the GTI is still the Golf to beat.