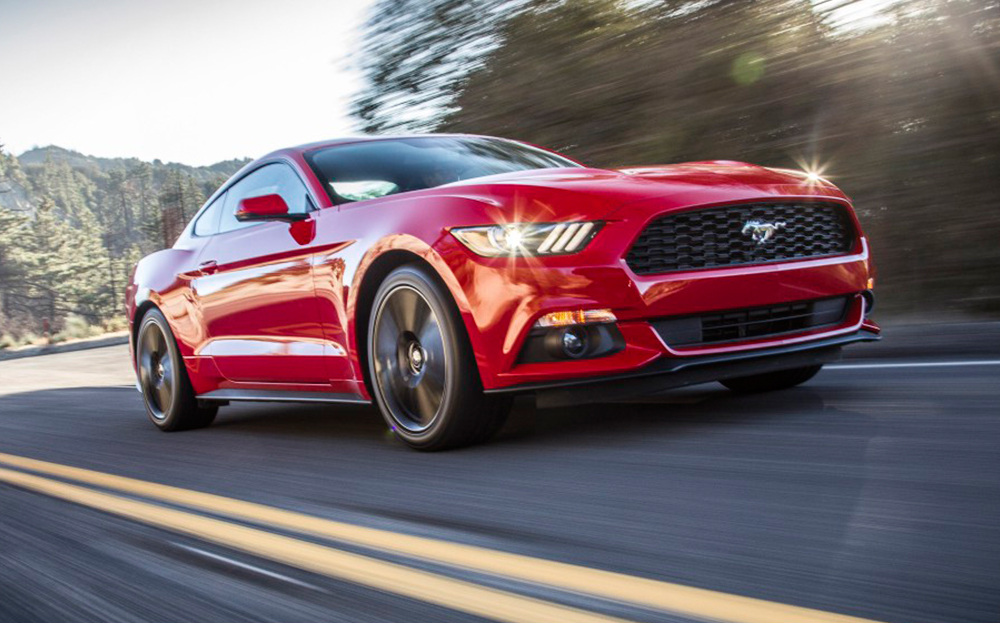 FOR A car we’ve never been able to buy, the Ford Mustang has a mystical grip on British hearts. It’s as American as chawin’ and whittlin’, yet generations of Limey petrolheads would know its shark-bite face and throaty bellow anywhere. It’s the classic car Europeans say they most want to own, but 50 years and more than 9m Mustangs into its production, most Britons have rarely seen one in the flesh.

While a handful of Mustangs have been imported, and a minuscule number have been converted to right-hand drive, we know the car largely by myth. It’s made more than 3,200 film and television appearances going back to Goldfinger and Bullitt, but on British streets the car remains almost as rare as the Batmobile.

That’s all going to change if Ford has its way. The company is turning its all-American hero into a global vehicle and even has its sights on that tiny island off the European mainland where you have to do an expensive redesign and move the steering wheel to the wrong side. A year from now the first factory-produced right-hand-drive Mustangs will start rolling off the boat, and there are those among our citizens who are beside themselves with excitement.

Is the passion justified? Is the 2015 Mustang a worthy successor to the gorgeous, growling artwork that captivated us in the 1960s and 1970s? Does it go with a guttural roar? Will it bounce and jar down rolling streets as if Steve McQueen were at the wheel? Can you snake through the twisties, painting tyre calligraphy on hot tarmac? And can it survive the leap off the silver screen and onto the mean streets of Ponders End or Ilkley? 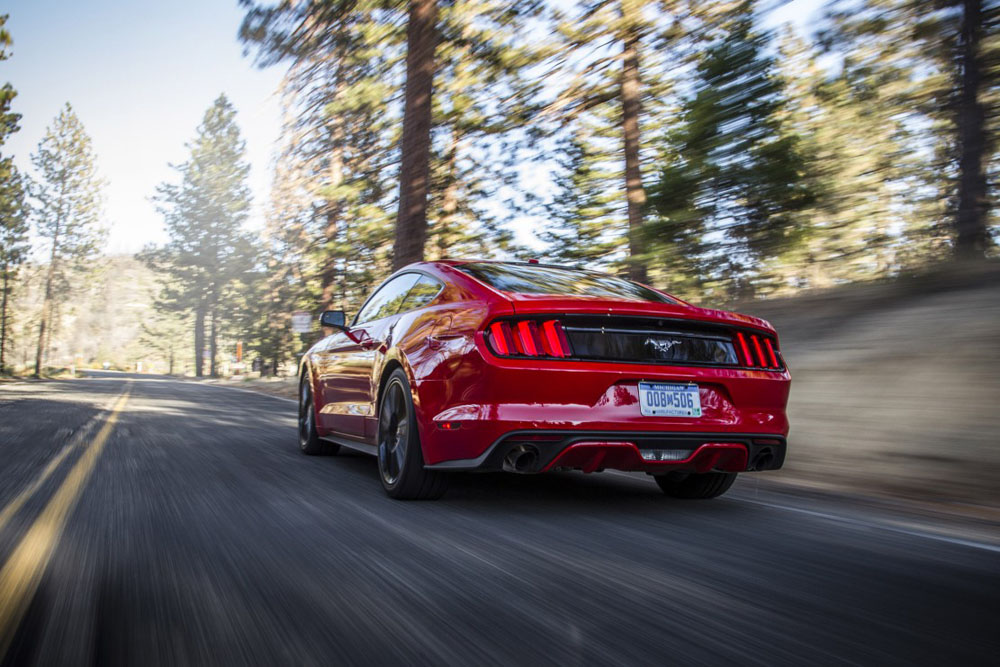 Well, it’s a good car. It’s a very good car, even though the requirements of European homologation have buffed off some of its kick-down-the-door-and-roll-in-the-stun-grenade edge. You can buy it as a 5-litre V8, but in its most basic form it has a sensible 2.3-litre engine that’s made in Spain. That dinky little EcoBoost engine gets about 30mpg on the combined cycle but is turbocharged to put out more than 300bhp. The fit and finish are so good, you’d swear the Germans had a hand in them. The suspension is excellent, and it actually goes round corners quite fast, with the back wheels following the front.

But, global or not, it remains unmistakeably American. It’s big and brash and weighs more than 1½ tons. The bulging-muscle lines speak not of prissy European finesse but of the application of power. It may have been conceived by a Scotsman — Moray Callum, Ford’s Dumfries-born vice-president of design — but the Stars and Stripes flies wherever its triple-banked LED lights shine.

Let me illustrate the Atlantic divide. This car has been sculpted in the wind tunnel to reduce drag by 3% and given an aluminium bonnet to save weight. Then Ford went and put in a feature called Line Lock — on the V8 GT version of the car at any rate — that jams on the front brakes while leaving the rear wheels free, so you can rev the hell out of them in a cloud of reeking tyre smoke. I did not try this on the public highway, honest, but a friend who did says it’s fantastic fun. This is just one of a suite of so-called track apps that you’re supposed to use only on the racetrack, but that everyone will use on the road.

Ford went and put in a feature called Line Lock that jams on the front brakes while leaving the rear wheels free, so you can rev the hell out of them in a cloud of reeking tyre smoke

Callum’s conundrum was to build 50 years of American Mustang tradition into a vehicle that will sell in more than 120 countries in pursuit of Ford’s strategy of addressing a single global market. He has erred towards the preservation of the home market, producing a car that was born to make whoopee while being tame enough to sneak past the back door of a Brussels regulator. In the guttural roar department the 2.3 EcoBoost falls short. The company has tried — wind noise is almost inaudible, road noise is heavily muted and it has actually piped engine and exhaust noise into the cage to keep faith with history. It hasn’t worked. The 5-litre sounds better, but even that has the bureaucrats’ approval.

The Mustang has two America-width doors and four seats, allegedly — the back would be comfortable if you had no feet, but the front is more than adequate for two full-fat adults of any nationality. The analogue dials are neat and stylish, and the selectable nature of the touchscreen means that a lot of messy clocks have disappeared. 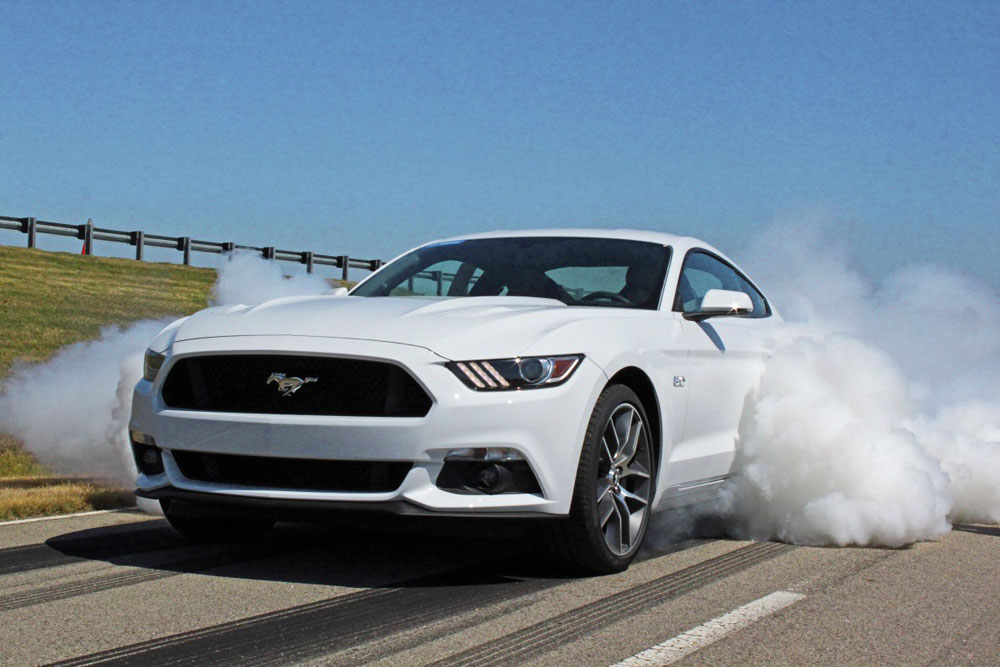 The quadrants of the steering wheel house your sound-system controls, your phone switches, your cruise control and your toybox menu. There’s an alphabet soup of Blud-e-silly© Americanisms in the nomenclature, from Sync, BLIS and MyKey to Track Apps™, MyColor and Shaker Pro Audio, but it boils down to heaps of neat stuff to play with.

You can choose the colour of the ambient lighting in the cupholders — you can design your own shades — and find out what the pressure is in the rear offside tyre or what the fuel-air ratio is this morning.

There’s a handy accelerometer to tell you how much G-force you’re feeling. With launch control you can select the revs level at which the clutch cuts in: 3000rpm perhaps for a slick road, 4500rpm in the dry.

After driving the 2.3-litre version and the 5-litre car back to back I’d say it’s not worth paying the extra for the big 429bhp engine. Which is lucky because it drinks fuel like a jumbo jet

The Mustang comes with a six-speed manual or an automatic box with flappy paddles as an option, and the 2.3-litre engine does a remarkable job of pushing it down the road, hitting 60mph in 5.2 seconds; for the V8 the 0-60 figure is 4.4 seconds.

As well as the turbo, the EcoBoost unit has variable camshaft timing and direct injection to squeeze more power to the back wheels, and in fact after driving the 2.3-litre version and the 5-litre car back to back I’d say it’s not worth paying the extra for the big 429bhp engine. Which is lucky because it drinks fuel like a jumbo jet — OK in America, where petrol costs less than we pay in tax on it in the UK, but very much a treat for the wealthy, or the mad, at home. 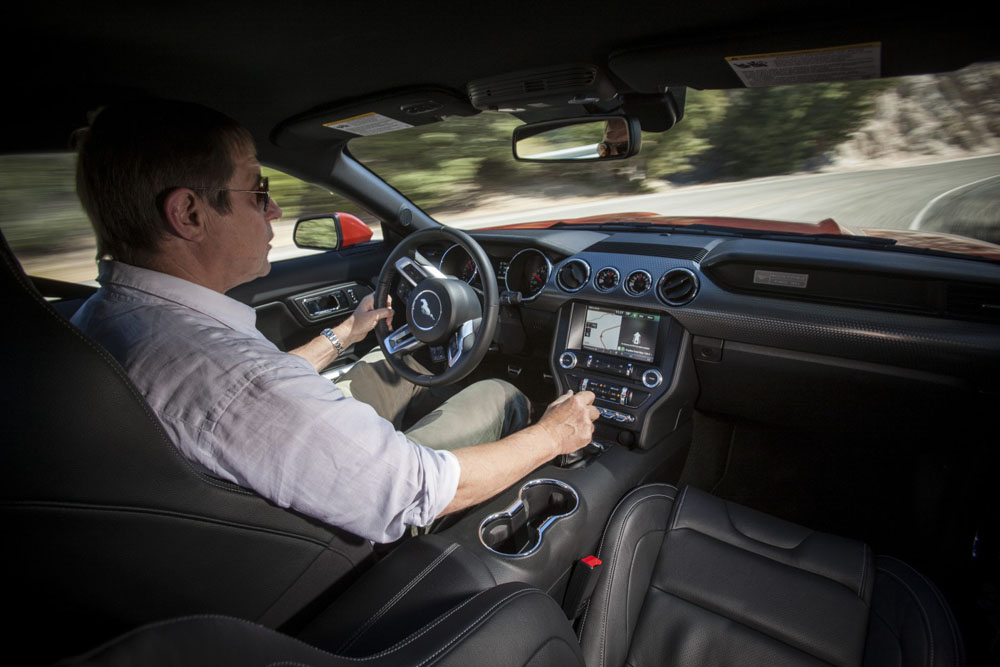 The 2.3-litre unit is a very accomplished engine with virtually unnoticeable turbo lag, and Ford says it gives us Europeans “the fuel economy and low CO2 emissions we, as car consumers, demand”. And no, you can’t have a diesel.

The real surprise is the un-American handling. On sinuous canyon roads it does not wallow like a pig. The fully independent suspension is a match for the engine and with the right tyres it clings to the asphalt adroitly, despite the weight. The stubby gearstick gives slick shifts, although the clutch is a tad heavy, and the Brembo brakes are commendably savage.

You’ve got a toggle switch for steering sensitivity, sharpening it up noticeably in the Sport setting and leaving it languorous in Comfort mode. There’s another switch for the drive settings — Normal, Sport, Track and Snow/Wet. The last of these would be suitable for the old lady driving to church on Sunday, while Track is for the yob in you: it stretches every fibre of the car to screaming point. But you’re only supposed to use it on the racetrack, remember?

Ford has ramped up global expectation of the Mustang, having first let the pony out of the bag late in 2013 with official confirmation that it was finally breaking out of North America. Europe saw it first at the Geneva motor show in March, and Britain got to touch it at the Goodwood Festival of Speed in June. Options on the first 500 European-spec cars were offered in a half-time TV advert during the Champions League final in May — they all went within 30 seconds.

Ford’s assault on Britain is not tentative. It says it’ll be shipping in 1,500, maybe even 1,700, Mustangs to start with. The basic model should cost a tad shy of £30,000 and you’ll pay an extra £4,000 for the V8. At that sort of price it’s up with the Audi A5 or the BMW 4-series, but in fact it has no direct competition — as an all-American import it’s going to occupy a niche it has yet to create.

Undoubtedly there’s a hunger across the world for something with Mustang written on it. It has almost 8m likes on Facebook — more than any other car — and 55% of them are from outside North America.

But is Ponders End ready for a sharp-suited, shouty, full-on American interloper? I drove the US-spec car through Hollywood, imagining that I was in Shoreditch High Street and wondering whether I’d get the same approving glances — and whether I’d give a stuff if I didn’t. No and no were the answers.

Statistics given are target figures for European models