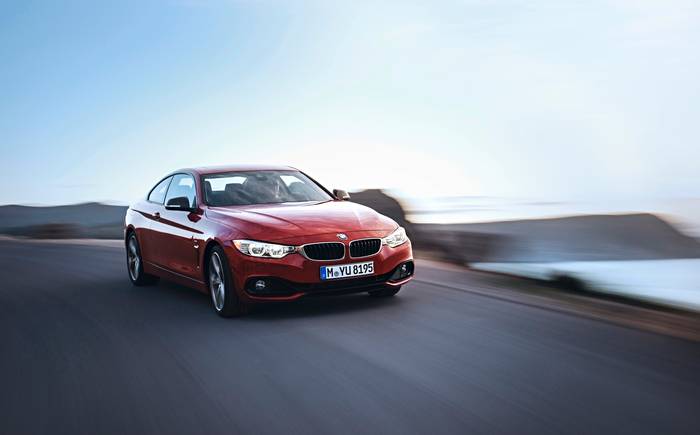 Connoisseurs of cinema will be familiar with the moment in the masterpiece This Is Spinal Tap when Nigel Tufnel, the professionally confused rock guitarist, introduces the puzzled documentary maker Marty DiBergi to his prized amplifier.

The guitarist proudly draws DiBergi’s attention to the numbers on the dials, which run not from 0 to 10, as conventionally, but from 0 to 11.

There’s a moment while Tufnel considers this before ending the discussion by replying, “These go to 11.”

It’s not difficult to imagine an almost perfect replica of this conversation taking place when BMW product people explained to senior management how they were thinking of launching a new 3-series coupé to stand in line with the 3-series saloon and the 3-series Tourer, but that instead of calling it a 3-series coupé they were intending to call it a 4-series coupé.

Search for and buy used BMW 4-series on driving.co.uk

And from the product people the pause for reflection, followed by the reply, “These go to four.”

BMW’s decision to place coupé, convertible and Gran Coupé versions of its odd-numbered cars into their own even-numbered subcategories (away, essentially, from the more conventional, less fun stuff) is either a necessary piece of housekeeping or mere brand-strategic window dressing, depending on your point of view.

Either way, it’s playing fast and loose with tradition, and fans of the 3-series label and its distinguished history may even feel a little affronted that their coupé has now been rounded up and shunted off to fend for itself in a new catchment area.

Ways in which the 4-series coupé is “one more” than the 3-series coupé: it’s longer from tip to toe by the trifling amount of 26mm, yet its wheelbase is greater by almost twice that sum, bringing the wheels further out to the corners. The roofline now lies 16mm lower and the car crouches closer to the ground. Indeed, as you’ll be able to tell people at dinner parties, it has the lowest centre of gravity of any current production BMW.

The front and rear track have been widened and the rear wheelarches are muscled up to the extent that they are now the widest point of the vehicle, stretching even past the wing mirrors.

The car has been stiffened, its suspension has been reappraised and, despite its bodily expansions, it has managed to lose 25kg of weight, which most of us would be lucky to achieve in three years on an entirely carb-free diet. 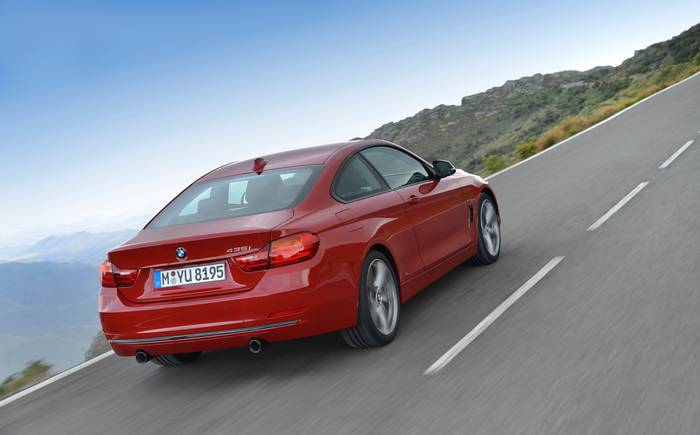 Meanwhile, a mean-looking black air intake wraps the front end, from foglight to foglight, funnelling the wind through to the bladed “air breathers” on the flanks. The ridge that runs the length of the bodywork creates more interestingly waxing and waning reflections, and the signature twin “kidney” grilles now tilt forward from their bases and make a bigger effort to get attention than ever. (To examine the evolution of the 3-series’s front end into this one is to notice the ever more extreme “kidneyfication” of the front grille. Many scientists now speculate about a time — not too far distant — when BMWs spontaneously grow a third kidney.)

We drove the 3-litre 435i with the eight-speed automatic transmission — first, sensibly, on Portuguese roads, and second, in a state of high anxiety and to a soundtrack of keening tyres, on the Estoril racetrack. It was quick, firm, quiet and well mannered at low speed, and perfectly capable of going up to 11, if pushed.

All the usual high-end BMW gubbins will be on board — the brand’s peerless colour screen and head-up display — along with the slob-friendly High Beam Assistant, which allows you to leave your lights idly on full beam without blinding oncoming drivers.

We can also report that the back of the car contains two finely sculpted leather seats and those most unfashionable items in a coupé: workable head and legroom for a person of 6ft, with the extended offer of an acceptable window view. Although, of course, you’ll still have to snap yourself in two to get in and out of there. But otherwise it wouldn’t be a coupé, would it?

Reason insists that BMW’s mid-range coupé has never been more competitively sporty, more fun to drive or more handsome. It’s never been more expensive either. Stands to reason, though. These go to four.