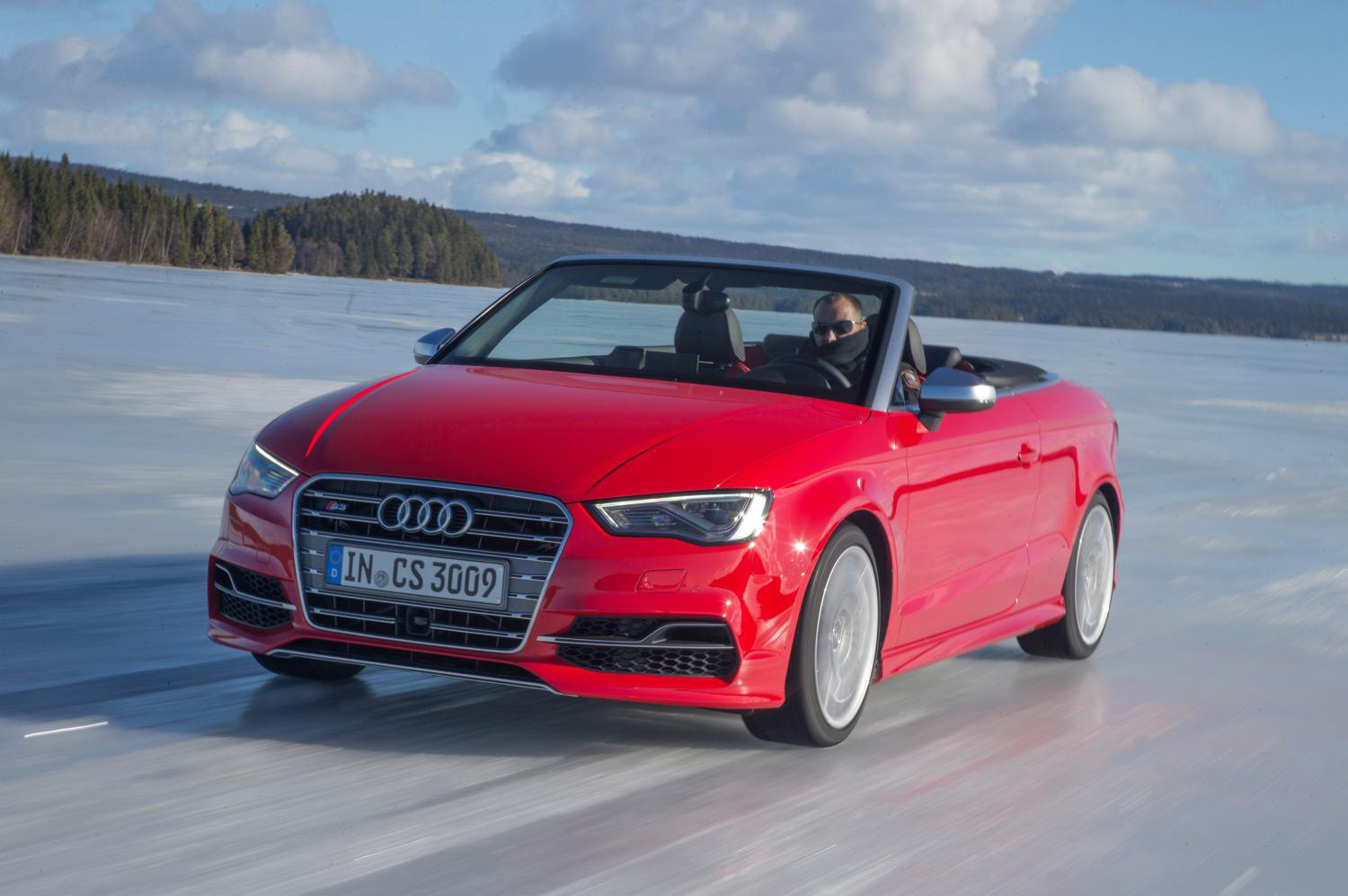 GIVEN THAT we were on the launch of Audi’s latest S3 cabriolet, being asked by my co-driver, rather timidly, if I thought we should put the roof down was nothing out of the ordinary. The answer would have seemed pretty obvious, except we were in northern Sweden, the temperature was well below zero and it was snowing. What’s more, the car is capable of accelerating from 0 to 62mph in 5.4 seconds, and on to a top speed of 155mph.

Actually, there is a lot to learn about the soft top S3 while the roof is up; this, the most powerful, most sporting iteration of Audi’s A3 cabriolet thus far. Its 2-litre turbocharged motor produces 296bhp and a big 280lb ft wedge of torque, from as low as 1800rpm. All that syrupy power is fed through a six-speed, dual-clutch transmission of quite other-worldly smoothness.

Search for and buy an Audi A3 quality used car on driving.co.uk

It is quite comically swift, even a touch quicker than its most obvious rival, the BMW 135i M Sport convertible. That’s particularly true on Swedish roads covered in ice and inches-deep slush, because unlike the rear-wheel-drive BMW, the S3 uses Audi’s all-wheel-drive quattro transmission. In a fraction of a second it can work out which wheels have traction, and send the power to them. Which means you can accelerate hard in conditions that would see other cars pirouetting backwards into a ditch, or just uselessly spinning wheels (although it is fairly important to remember that a even a quattro-equipped car accelerates better on ice than it brakes).

As much as I could tell in the virtually gripless conditions, the S3’s steering has a reassuring weight to it and good feedback. Even better, the quattro system has been tuned so that the nose of the car turns more sharply into corners with less understeer. But this is still a sizeable car that feels more potent GT cruiser than outright sports machine, which is probably the right place for it to be.

If you’ve read anything about Audis, you’ll know that motoring hacks tend to go on about the quality of materials and construction in their cabins. Much as I’d like to construct a Clarksonesque witticism to puncture that perception, I can’t. The A3’s cabin is a marvellous place to spend time

The S3 has several suspension and throttle-setting modes, most of which are self-evident. They are: efficiency, comfort, auto and dynamic. Dynamic mode also opens a flap in the exhaust system to make it sound gruntier, which is nice.

Less nice is the ride quality in dynamic mode, which is too firm on anything less than a billiard table. It’s better in the tamer modes but on the roads we travelled, the suspension still felt too firmly damped.

And for all its brutish performance, which is accompanied by a portentously bassy woofle-and-rumble as you change gear, the S3 is a relatively low-key looker. It sports the usual S-model accoutrements such as the quad-pipe exhausts, tiny S3 grille badge, front diffuser and air intakes, lowered ride height and 19in wheels, but if this car had an accent it would be more Bill Nighy than Phil Mitchell; more roguish, less thuggish.

Likewise, the interior has a few touches to remind you that you’ve paid nearly £40,000 for Audi’s flagship A3 cabriolet. So there’s a flat-bottomed steering wheel (never quite understood the point of these), turbo-boost pressure gauge (if you’re experiencing full boost, this isn’t really what you should be looking at), and brushed stainless steel pedals and footrest for added sportiness.

If you’ve read anything about Audis, you’ll know that motoring hacks tend to go on about the quality of materials and construction in their cabins. Much as I’d like to construct a Clarksonesque witticism to puncture that perception, I can’t. The A3’s cabin is a marvellous place to spend time, while being supremely comfortable and having controls that are just about perfectly placed. With the triple-layered fabric roof up, sound insulation is about as good as a steel-topped coupé.

And so I put the roof down, which brings a bit of a revelation. It’s still snowing, still cold, but the S3 remains giggle-inducingly comfortable. I’ve put up the wind break in the back seat, activated full-power on the bum warmer and turned on the air-scarf neck warmer in the headrest. The result is that I’m perfectly toasty and comfortable cruising along in swirling snow at 70mph. The only unpleasantness comes when an oncoming HGV hurls a bucket of slush over the top of the Audi, and even this largely misses the target. So yes, I’d happily drive this car to the North Cape with the roof down.

We did, though, encounter a series of nasty, tightly packed potholes that provoked some scuttle shake, albeit not much. That reduced body stiffness is an inevitable result (unless you’re Porsche) of cutting the roof off. It’s just that the Audi is otherwise such a solid piece, that a small chink in its armour comes as a surprise.

Which isn’t a deal-breaker at all, especially in light of everything else the Audi does so well. If, however, you want a drive that’ll put a huge smile on your face every time, you might want to put that BMW on your shortlist, too.

BMW 135i M Sport convertible, £37,265
For Fabulous engine and great handling Against Space in the rear seats is tight
Search for and buy a quality used BMW 1-series on driving.co.uk

Volkswagen Golf R 2.0 TSI cabriolet, £33,475
For Great handling, and it’s a proper four seater Against Doesn’t have quite the badge appeal of a BMW or Audi
Search for and buy a quality used VW Golf on driving.co.uk