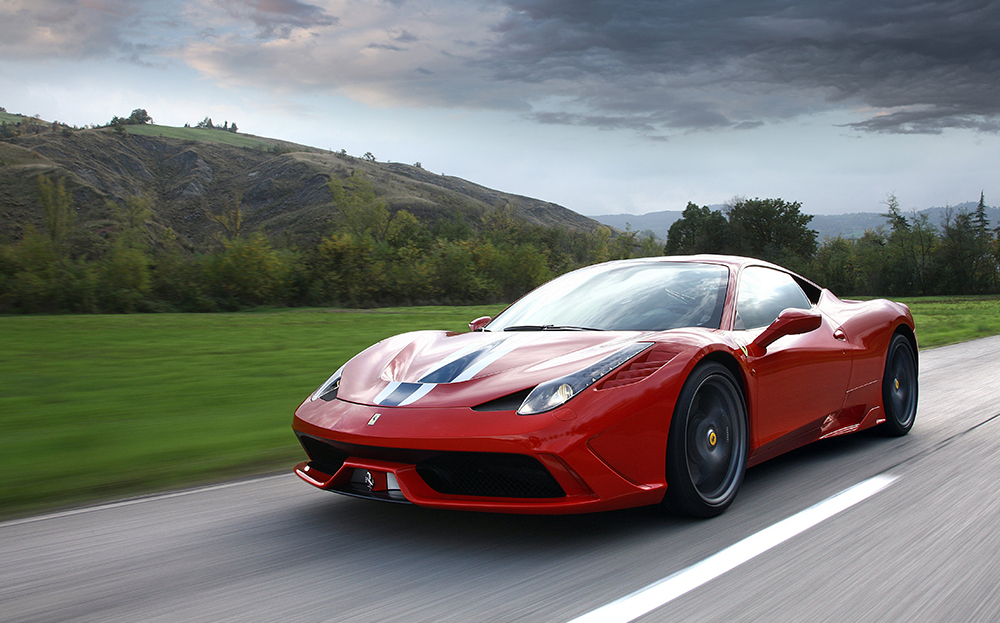 What is the Ferrari 458 Speciale?

Ferrari has pulled apart the standard 458 Italia and rebuilt it, turning everything “up to 11” so that it is more powerful, lighter, louder (on the eye as well as the ear) and bursting at its carbon-fibre seams with technology that means any driver can jump in and drive fast.

Much of this technology has been developed in Formula One. Plenty of car companies make similar claims, but few of them stand up to scrutiny.

You would buy one of these because you’re either a frustrated racing driver, and intend to take the car to race tracks around Europe, or you’re not content with owning a “regular” 458 Italia like every other Joe Bloggs on your Chelsea square.

Such one-upmanship will cost you dear. A 458 Italia costs from £177,406, whereas the more exclusive 458 Speciale raises that to £206,945. And those prices are before the temptation of Ferrari’s extensive options list and personalisation program…

There are alternatives – cars that are also built for speed and the purist driver – but whether they will tempt buyers over the mystique of a Ferrari is a matter of personal taste.

The question for those pondering one of life’s more pleasant decisions is whether the Speciale version is that much more thrilling than the Italia, a car that was never found wanting in the speed department. 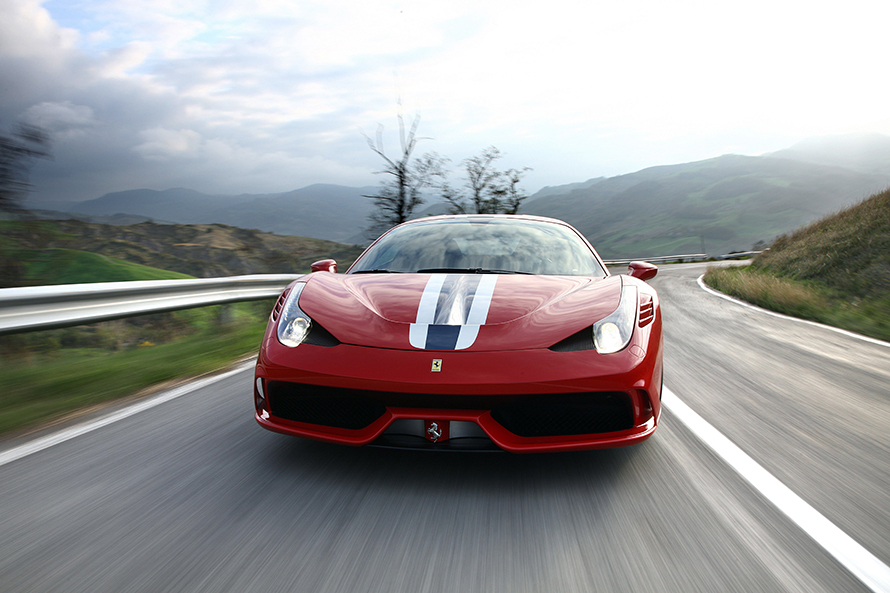 Approaching the Ferrari 458 Speciale for the first time is a moment of trepidation you’re not likely to forget in a hurry. It’s probably like walking up to the imposing doors of a mafia don’s office: you don’t know whether you’ll leave with a suitcase filled with bank notes, or end up being rolled in a carpet and slung over the shoulder of a henchman.

The car looks imposing. There are lots of little wings added to the bodywork, presumably to help keep it pinned to the road, rather than parked in a hedge. Ferrari says some of these are active, changing shape to increase downforce as the car speeds up. We’ll take its word for it.

Once fired to life, the tuned 4.5-litre V8 engine sounds a little louder than the “standard” motor. The power has been raised from 562bhp to 589bhp, but the point at which it’s delivered – 9,000rpm – remains as frenzied as ever.

The same seven-speed dual-clutch transmission is used, but the speed of the gear shifts has been increased. Don’t ask us how; they’re already as quick as an eye-blink in the standard 458.

When you’re pottering around in automatic mode, the software for the dual-clutch transmission is aggressive. “There is only one way to drive me,” it says: “Fast.” Even when you are slowing gently for a corner, the gearbox shifts down gear by gear in rapid succession, keeping the engine revs high and ready to slingshot the car out of the apex.

Put your foot down, and the Speciale really does feel like it’s been fired from a giant slingshot. The cry of the naturally aspirated V8 is as wild as supercars come. At 9,000rpm it shakes your insides and has drivers of cars ahead looking in their mirrors in a state of mild terror.

Ferrari says it will launch itself from 0-62mph in 3.0 seconds and, at the test track, can charge on to 202mph. Reassuringly, the uprated Brembo brakes – a version of those fitted to the La Ferrari hypercar – cope admirably with the Speciale’s turn of speed, and the pedal feel allows the driver to pile on pressure right to the point where the anti-lock braking starts to kick-in.

As for the steering, it really is the closest thing to a go-kart’s (or as they’re more correctly known these days, a “kart”) that you’ll find in a road car. It’s unusually direct and full of feedback; the driver can tell how much grip the tyres have, and adjust their throttle or braking inputs accordingly. 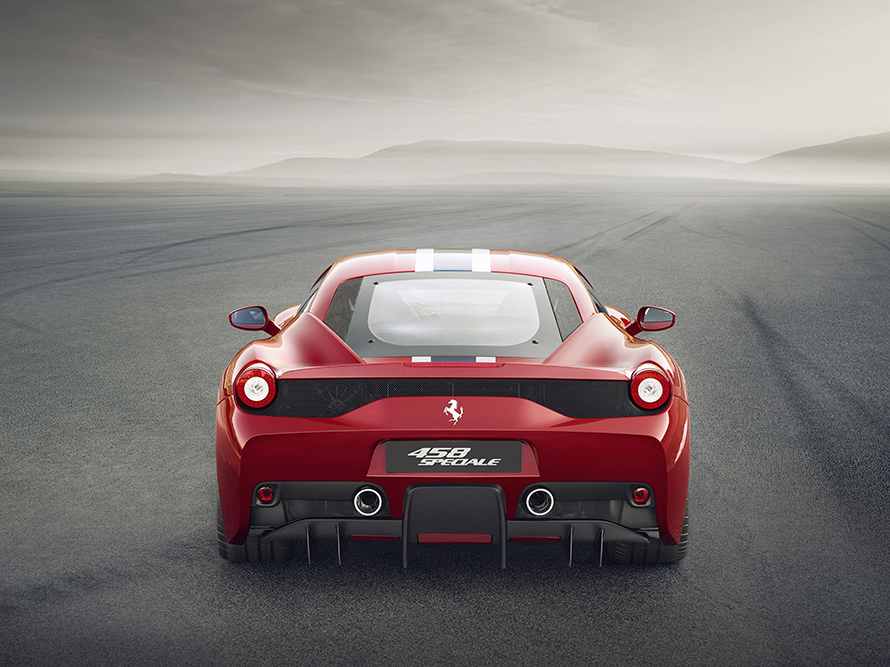 Then there’s the technology at work. A combination of stability and traction control systems work with an electronic differential and a new side-slip angle program to monitor grip levels and power delivery. Somehow it all works seamlessly, with forward progress yet a little helping of sideways drift.

It feels sensational on the road, even in damp conditions. Without the tech it would risk becoming a “Footballer Horror Smash” front page splash on The Sun.

At a track it is even more exciting. This is a car that encourages the owner to explore their ability as a driver.

If there’s a downside, it’s one inherent to mid-engined cars: the Speciale has less traction and drive exiting bends than a rear-engined Porsche 911 GT3. But do you care? After all, it can be all the more exciting for it…

The seats set the tone of the 458 Speciale. They are Sabelt racing seats, with carbon-fibre backs and suede-covered facings. They grab the driver and passenger with the authority of a bouncer ejecting worse-for-wear students from a bar.

The aluminium floor is left bare, but pressed with ridges so your shoes don’t slide around during some particularly heavy braking into Monaco’s Bus Stop Chicane. There’s no audio system, so get used to the blare of the V8, but you can play with the Manettino switch on the steering wheel to your heart’s content, progressively unwinding the leash of the countless electronic driver aids until – if you’re blessed with the confidence of a city trader – they’re switched off entirely.

The driving position and the visibility out of the car are surprisingly comfortable and clear, but Ferrari’s decision to place the switches for the indicators and windscreen wipers on the steering wheel still feels like a fad too far.

If there’s an issue with the 458 Speciale, it’s the question of how useable it is. The firm ride comfort, intensity of that V8 engine, a cabin which has minimal sound insulation, thinner glass and a plastic rear window, the roar of the Michelin Pilot Sport track-biased tyres; all these conspire to make it a car that will feel tremendous as you accelerate out of the pits at Spa circuit, but quite tiring on the slog back to the UK.