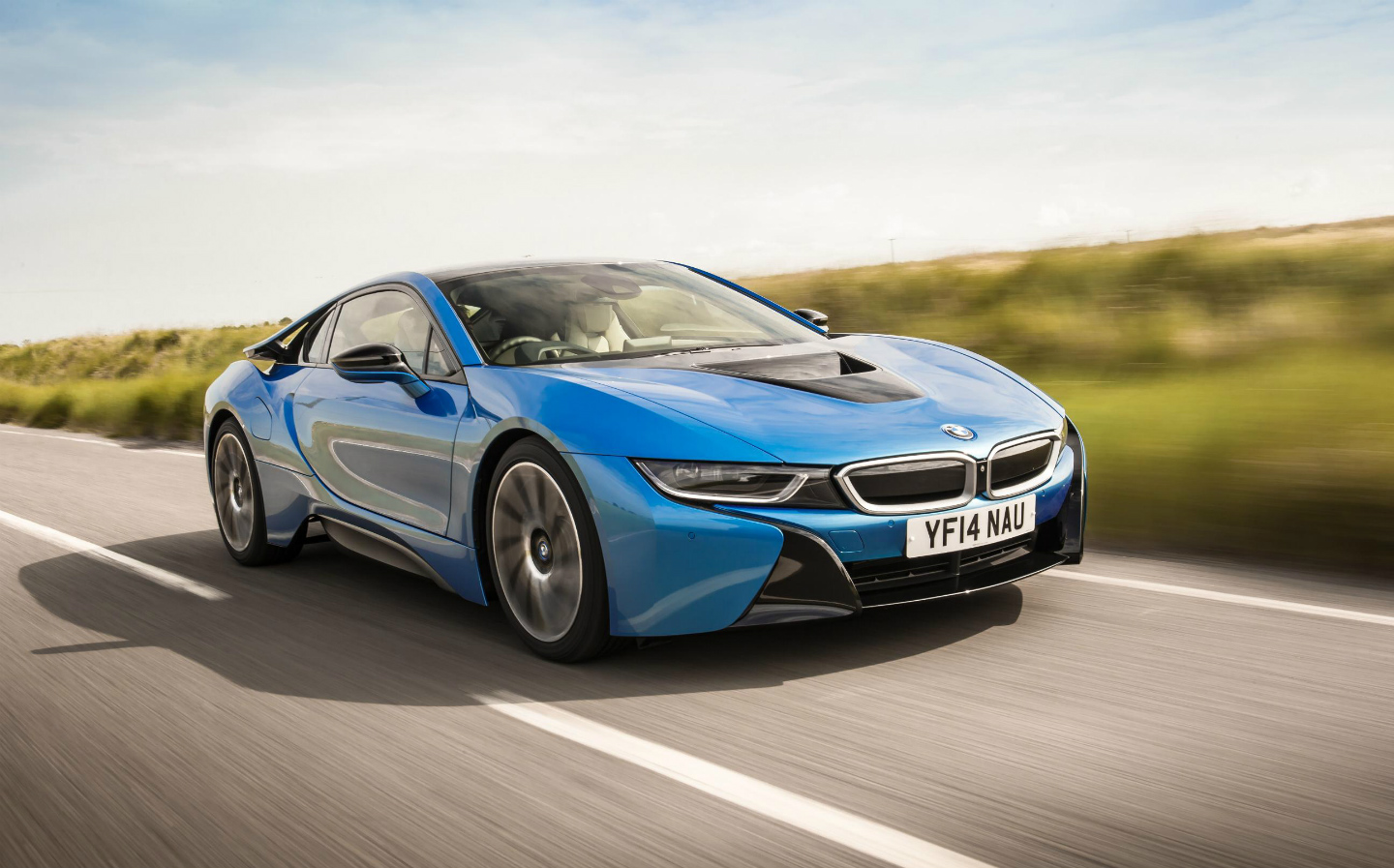 WE ARE too dependent on oil. Everybody knows that. And everybody knows the long-term solution is hydrogen. But governments don’t like long-term solutions. They like fixes to happen by tomorrow afternoon because then they will still be in office. So they have leapt onto the available-now hybrid bandwagon, offering discounts and other incentives to people who buy Toyota Priuses and the like.

And the simple fact of the matter is this: the new range of plug-in hybrids that can be charged via a 13-amp socket in your garage are going to send demand for electricity through the roof, which will be a problem for cities such as London that are facing power shortages and the threat of brownouts even now.

Still. This is where we are, so instead of moaning, let’s move on to have a look at what is easily this year’s most eagerly awaited new boy, the most talked-about car in years — the BMW i8.

I do not believe that the solution to our energy crisis is to be found by developing a car that has a normal petrol engine as well as an electric motor that has to be powered by an extremely heavy bank of batteries.

Let me give you the headline figures so you can see why everyone is rocking backwards a little bit on their heels. It accelerates from 0 to 62mph in 4.4 seconds. Like all high-performance BMWs, it is limited to a top speed of 155mph. And yet, thanks to its hybrid power train, it can do 135mpg.

You read that correctly. One hundred and thirty-five miles to the gallon. I could bang on at this point about how a hydrogen-fuel-cell car could do 1,000mph while using no fuel at all, but that would be churlish, so let’s get back to the i8, which looks as though it’s come from the pages of an Isaac Asimov novel, can hang onto the shirt-tails of a Porsche 911 and costs about the same to run as a wheelbarrow.

There are two power sources. At the back, driving the rear wheels, there’s a British-built three-cylinder 1.5-litre turbocharged unit that despite its smallness produces 228 brake horsepower. Then, at the front, driving the front wheels, there’s an electric motor that produces a colossal 184 lb ft of torque from the moment you turn it on.

So you have a torquey motor driving the front wheels and a whizzy little turbo driving those at the rear, and frankly that sounds a recipe for disaster. Either the car will spin round and round in increasingly dizzying circles, or it will split in half. Which means, you may imagine, that to drive this car you need to be the genetic twin of Buck Rogers. 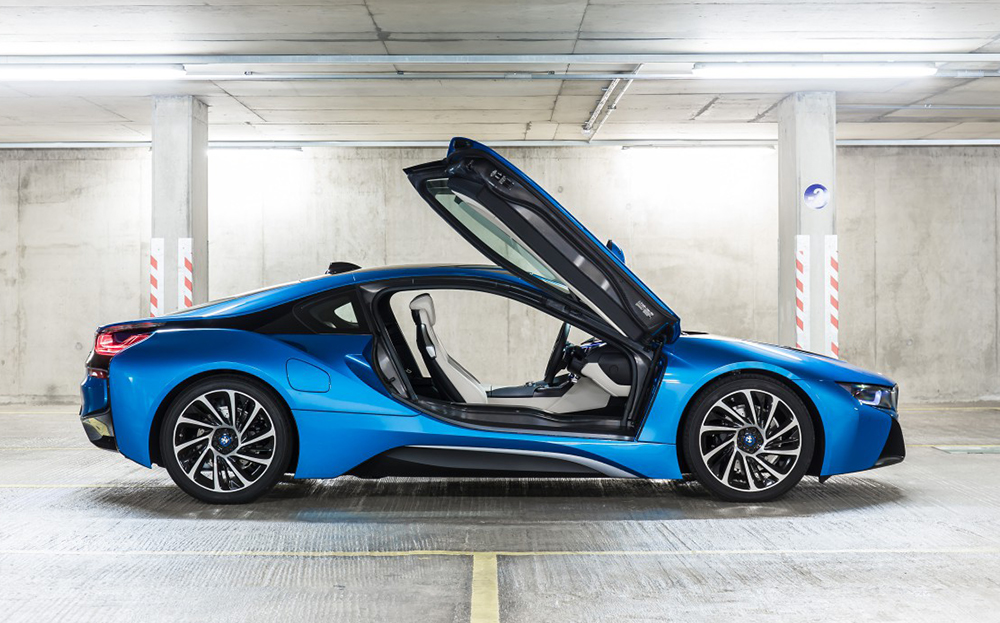 Not so. All you need is to leave your short skirt at home, because climbing under the swan-wing doors and over the wide sill is a manoeuvre in which much dignity can be lost.

Once you are behind the wheel, though, all seems to be fairly normal. There’s a normal sat nav system, normal heater controls and normal cupholders. Only if you concentrate do you realise that everything feels a little lighter and a little thinner than in a traditional BMW. It feels a bit like the Alfa Romeo 4C in there. Borderline flimsy.

But this is necessary, because in a car with a bank of batteries every effort must be made to keep the weight down. Even the windscreen is thin. So you fire it up and nothing happens. Well, the lights come on and the dash wakes up, but there’s no noise. Mildly perplexed, you slot the gearlever into Drive and you’re off.

And that’s it. Despite the car’s huge complexity, you drive it in the same way you drive any other one. That is a colossal achievement. It does not feel like a normal vehicle. though. It weighs about 1½ tons but it feels lighter than a feather. It feels spookily light. It feels — and I have spent several minutes thinking about this — magnificent.

And so far we are still in town, using caterpillar silent drive most of the time. Only when you need a burst of speed does the petrol engine at the back fire up to help out. You don’t really know this has happened. But then I was out of town, on the long sweeper onto the bottom of the M1, and I moved the gearlever over to the left to engage Sport mode and floored it. Ooh, it shifts. And grips. And that little engine makes quite the most intoxicating sound this side of a Ferrari V12.

Speaking of which. Up near junction 9 I encountered an immaculate Ferrari 275 GTS and we drove side by side for a while. My favourite Ferrari of them all and this bright new dawn, and I was wondering, “Hmmm. Which would I prefer?” The BMW is that good.

There are some things I need to mention. If you drive in the default Comfort mode, the batteries are being charged only very slowly, and as a result, if you ask for the eDrive setting, or electric drive, you often get a message saying there isn’t enough juice. In Sport mode it’s a different story.

Energy is fed to the cells every time you lift off the throttle and every time you brake. But unlike in the hybrid Mitsubishi I tested recently, you can’t feel this happening. The braking feels normal. It feels brilliant. Nearly as brilliant as the steering, which is nervous and flighty but still the best electric setup I’ve found.

I encountered an immaculate Ferrari 275 GTS and we drove side by side for a while. My favourite Ferrari of them all and this bright new dawn, and I was wondering, “Hmmm. Which would I prefer?” The BMW is that good.

That said, after a longish run I still had only 10 miles of electric range available. BMW says that if you charge it up from the mains, you’ll get 25. Maybe you will. Maybe you won’t. But even 15 would be good enough for most people’s commute.

What we have here, then, is a car that runs silently on electric power when you just have to go to work. But that becomes a Porsche 911 when you are in the mood. This is a sport hybrid, but unlike other sport hybrids — the McLaren P1 and the Porsche 918 Spyder, for example — it does not cost eleven hundred and seventy thirteen million pounds.

It is so fabulously clever that it would be easy to overlook a couple of things that in a normal car would be considered big black marks. The windows don’t go all the way down, so you can’t rest your arm on the door as you go along, the boot is stupidly small and the rear three-quarter visibility is dangerously woeful.

It must also be said that the back seats are completely useless and the ride is just on the wrong side of jiggly. As a car, then, it still needs a bit of work. But as an achievement? Wow.

Toyota had just about convinced the world that if you wanted a hybrid you could pretty much kiss goodbye to the concept of fun. But with the i8 BMW has shown this ain’t necessarily so.

I still believe that with hybrids we are going down the wrong road. But with an i8, going in completely the wrong direction is at least wonderfully enjoyable.

Green as a Prius, desirable as a Ferrari