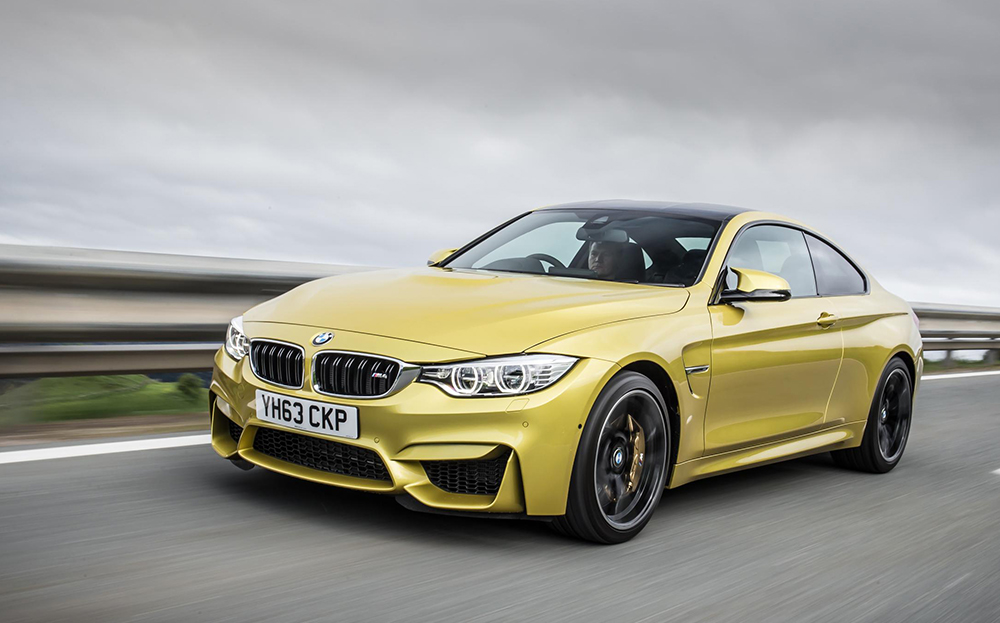 What is the BMW M4 coupé?

Along with its convertible sister car, this is the hottest 4-series model and replaces the M3 coupé. The M3 saloon is still available, though, and is powered by the same twin-turbocharged 3-litre straight-six engine, offering near-identical performance. The M4 coupé is the sportier-looking car and has a surprisingly roomy rear cabin with two comfortable seats, though you do have to squeeze by the front chairs to get to them. Not only that, it costs just £500 more than the M3, so which one you choose, saloon or coupé, may depend on how much you value ease of access and practicality. But more of these things later.

Rivals to the M4 coupé include not only the M3 saloon but also the Mercedes C63 AMG coupé, the Audi RS5 coupé and, because a coupé suggests only occasional rear seat occupancy, the much cheaper (at least until you specify options) Porsche Cayman S. The Mercedes probably comes closest to the M4 in character. To purists, it may even be the better car with its naturally aspirated 6.2-litre V8 ladling out a mighty 451 bhp and an even mightier 443 lb ft torque. Performance is as near as makes no difference but what might swing it in favour of the Mercedes is its throaty snarl at all revs. 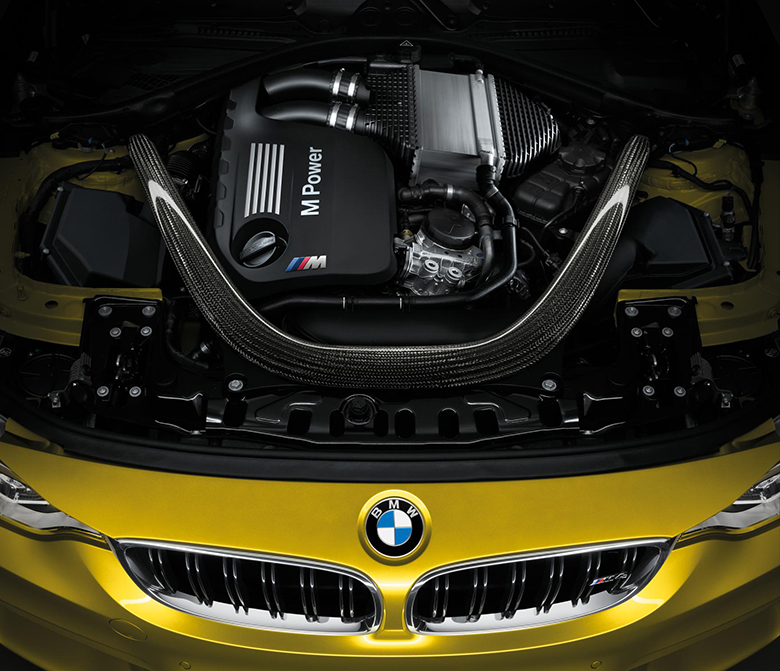 Before you even set foot in it, the M4 promises thrills aplenty. There’s the M4 badging, of course, but also the power bulge in the bonnet, the vast 19in wheels enclosing enormous drilled brake discs complete with M-badged callipers sprayed gold and, to keep weight down, the carbon-fibre reinforced plastic roof. The M4 in manual six-speed trim weighs 1497kg; 83kg less than the old M3 coupé. Should any lingering doubts remain about the M4’s intent, there are four chromed tailpipes.

Underway, the M4 manages to be a refined cruiser one moment and a snarling beast the next, a double-act it can perform largely thanks to its sophisticated Drive Performance Control system that offers a choice of driving modes controlling steering, suspension and throttle response. An additional system, called Drivelogic, influences the change speeds of the optional seven-speed dual-clutch transmission. In Drive (full auto), the three modes offered are Efficient, Relaxed and Sporty. In manual they are Comfortable, Sport /fast and Max, this last combining launch control. The distinctions between each mode are much sharper in manual with changes ranging from super-smooth to aggressive (Max). In this last mode, each ratio engages in an instant and with a fierce jolt. It’s intoxicating stuff  and allows the box to exploit the engine’s vast spread of torque , spanning 1,850rpm to 5,500rpm, to great effect.

Happily, the torque masks the lag as the engine’s twin turbochargers spool up. Floor the throttle in any gear, and the brief hesitancy is immediately replaced by a muscular shove in the back. The experience is heightened by the car’s Active Sound Design system which pipes the engine’s exhaust note into the cabin through the speakers. It’s a blood-curdling sound. 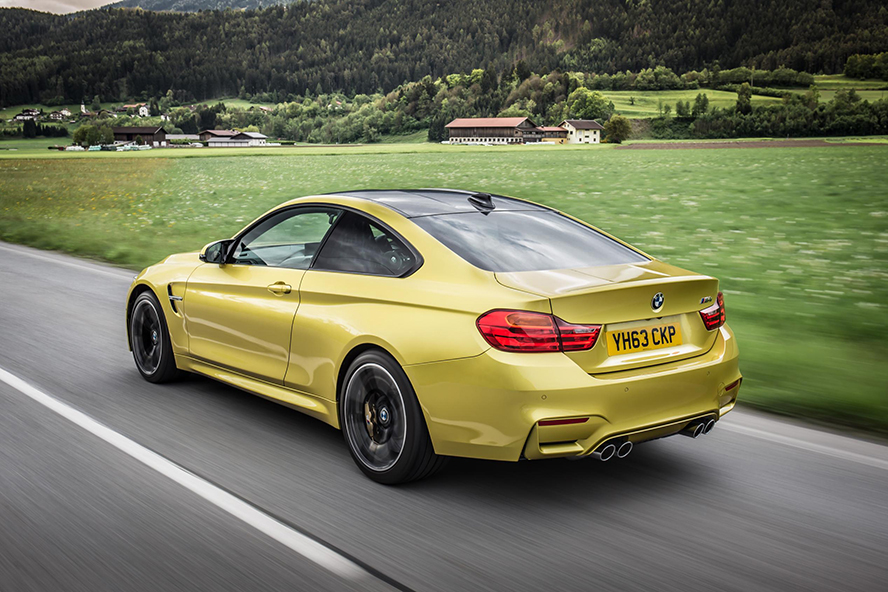 The three modes affecting the suspension and steering are Comfort, Sport and Sport+. For throttle response, Comfort is replaced by Efficient. Sport provides the best compromise between a supple but sporty ride, while Sport+ is probably best saved for track days. The steering in this mode becomes especially heavy.  Regardless of the modes, the front wheels are too easily deflected by surface imperfections and raised white lines. It’s a shock at first but you do become accustomed to concentrating that little bit harder and gripping the chunky leather wheel that little bit tighter. Thus accustomed, you can begin to appreciate the extra steering finesse and feel that the car’s new electro-mechanical system offers.

The brakes are immensely powerful but progressive. Handling is everything you’d expect, the car turning in obediently and possessing seemingly limitless levels of grip. Body control is excellent, the car remaining composed in the tightest turns. 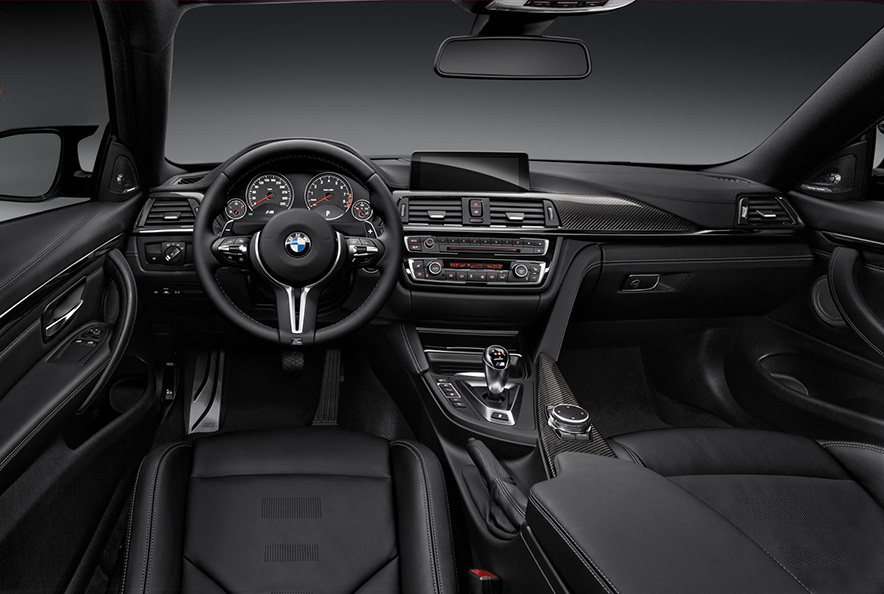 Save for some carbon fibre detailing and the obligatory M4 badging, it’s 4-series business as usual in the cabin. Fit and finish are impeccable, while BMW’s intuitive iDrive controller remains the one to beat for comprehensiveness and  ease of use. The interior could be brighter but then it wouldn’t be a BMW. The M-sport seats are extremely comfortable and in combination with the adjustable steering wheel it’s possible to fine tune your driving position to perfection. Three-quarter visibility during reversing is excellent.

The roofline extends far enough over the back to protect rear seat passengers from the sun. There’s plenty of legroom in the rear cabin, even for six-footers, while the seats (there are just two) are generously proportioned. Back seat passengers can slide the front seats electrically to aid entry and exit but it’s still an awkward manoeuvre either way, though one to be expected in a two-door. Perhaps also to be expected is that the boot is long but shallow and at 445 litres capacity, 35 litres smaller than the M3’s. But then it’s probably a price worth paying given the M4’s far sportier looks.