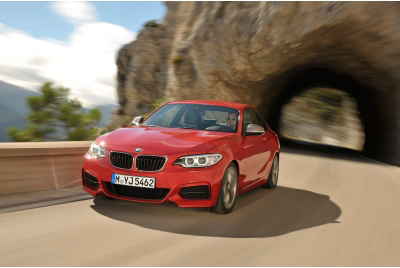 What is the BMW 2-series coupé?

The 2-Series is Tiny Tim, the smallest coupé of the BMW family. That means it is the most affordable BMW with sporting pretentions that money can buy.

Prices start from £24,265 for the modestly powerful but impressively frugal 218d SE. At that price ‒ which is quite expensive ‒ drivers should consider its many tempting alternatives before they can conclude that BMW truly builds the ultimate driving machine. There’s the stylish Audi TT, thrilling Subaru BRZ and its Toyota GT86 twin, the recently improved Peugeot RCZ and that excellent all-round coupé, the Volkswagen Scirocco. You might even want to compare it with the Volkswagen Golf GTD or GTI.

Currently the 2-series coupé comes with a choice of one 2-litre, four-cylinder diesel engine in two states of tune – the 118d and 220d – and two petrol engines. The 220i petrol uses a turbocharged, 2-litre, four-cylinder engine with 181bhp. The flagship (for now; a high-performance M version may be in the pipeline) 235i has a turbocharged, 3-litre, straight-six offering 323bhp beneath the bonnet. The best-selling version is the 220d. 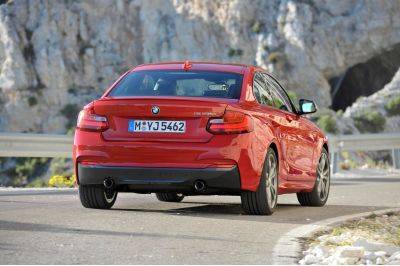 German cars have a reputation for being comfortable and refined, but the 220d coupé that we tested proved the exception to the rule. The gearstick shakes alarmingly when the 2-litre four-cylinder is started from cold, and there is an unwelcome clatter that makes it sound as though a London bus has pulled up alongside.

Even when warmed through, the rattle of the diesel engine remains present in traffic, and is exacerbated by the stop-start system which has the car shuddering each time the motor is restarted. It’s a constant annoyance.

However, it’s easy to see why the 220d is the best-selling version in the range. On paper, it offers an excellent blend of performance and fuel economy; the 181bhp engine powers the coupé from 0-62mph in 7.2sec, which is plenty fast enough for most drivers, and can return up to 62.8mpg on the combined cycle. And with CO2 emissions of 119g/km, road tax costs just £30 a year.

It lives up to those performance figures. The engine is never less than brisk and pulls keenly from as low as 1500rpm, making it flexible in all driving conditions and ensuring there is strong performance for overtaking. At a 70mph cruise in sixth gear, the motor spins away at 2100rpm, ensuring good responses, refinement and fuel economy.

Drivers who want to match the car’s economy claims of over 62mpg will need to switch the Drive Performance Control to Eco Pro operating mode. Compared with the Comfort, Sport and Sport+ settings, Eco Pro effectively dulls the response of the throttle to help eek out more miles per gallon, and optimises the electric load of functions such as the air conditioning or heated seats to minimise the burden on the engine. The company claims it can help drivers be as much as 20% more efficient with their driving.

It is noticeable in operation, if only because you have to push the electronic throttle further to the floor to drive the car briskly. At the other end of the Drive Performance Control spectrum is Sport+. This is for drivers who want to let their hair down. Select it and the traction control system is disabled (although stability control remains functional) and the throttle response sharpened up. The general impression is that your BMW can be made to come alive at the touch of a button. 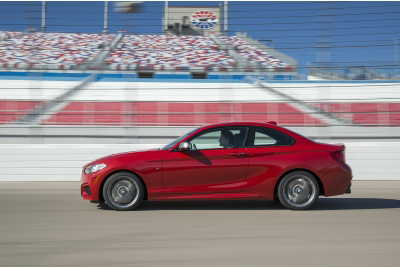 In this setting, you’ll find the 220d is thoroughly entertaining when zipping along a winding road. The car is claimed to have perfect 50/50 weight distribution over the front and rear axles, and sending the engine’s power to the rear wheels gives the handling a precision that is lacking in any other rival you care to mention. If there is a compromise for this responsive attitude, it’s a ride comfort that may be a little too firm for some drivers’ tastes.

You’re probably wondering whether the cabin of a 2-series coupé is spacious enough to be practical on a day-to-day basis. The short answer? Yes, so long as you don’t regularly need to carry adult passengers in the back seats (they’ll find their head is touching the roof). Helping its cause is a boot with nearly 400 litres of luggage capacity, and split/folding rear seats plus a ski-hatch. 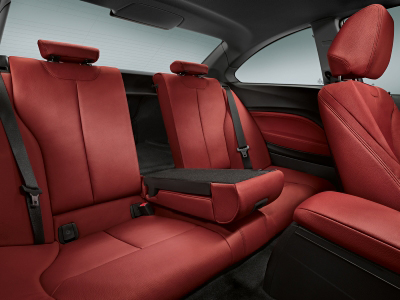 Audi and Mercedes are doing a better job with their car interiors. The plastics of the 2-series cabin look and feel a little cheap while, curiously, the leather used on the steering wheel does a convincing impression of plastic. The design – with intersecting lines and panels which look as though they’re laid over the top of one another – is fussy.

Fortunately, the driving position is excellent, with a wide range of adjustment to ensure drivers of all shapes and sizes can get comfortable, and the controls are well laid out and intuitive to operate. Many functions are controlled through BMW’s latest generation iDrive, an infotainment system which controls all audio sources, phone, navigation and vehicle settings. It incorporates a touch pad which you can write on using a finger, but when the voice recognition software is so good, it’s a redundant feature. 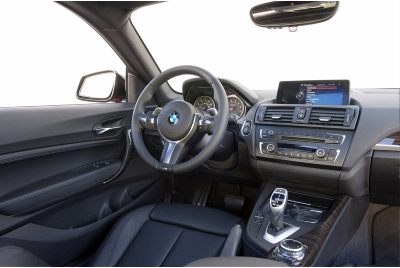 What’s good to find is that BMW believes in keeping traditional buttons for the most common operations, such as the climate control, audio system and heated seats. It’s a sensible strategy, one that removes the unnecessary  distraction of clicking through menus to perform a simple operation, such as changing the fan speed.