By Will Dron
Share Article
The A8's 'model refresh' for 2014 smooths the edges of what is still a top-flight prestige saloon
Pros
Bags of room, particularly in long-wheelbase version
Velvety ride from standard air suspension
World-class comfort, build and technology
Cons
Limited storage at centre console
Fiddly gear selector
Not quite as special to be seen in as some other execs
Cars > Audi > A8 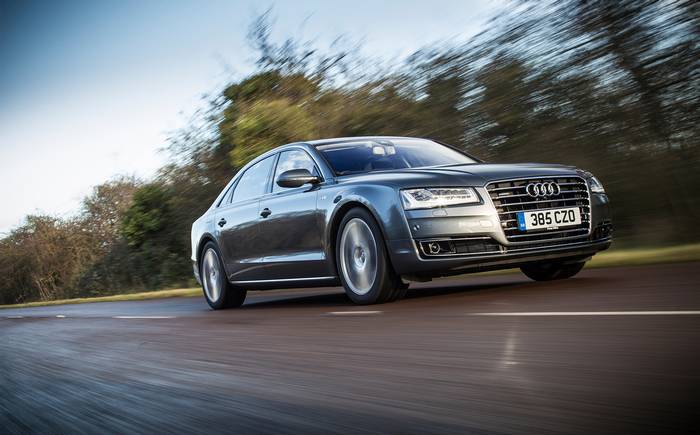 What is the Audi A8?

Audi’s flagship A8 may look like a run-of-the-mill executive saloon, but thanks to some clever marketing deals with celebrities, it has become the car of choice for red-carpet events, and that has earned it  extra cachet.

The model received mid-life updates for the start of 2014, including more powerful and efficient engines, styling tweaks to the bonnet, grille, bumpers and headlights, and an uprated “night-vision assistant” that can “see” large animals and pedestrians in the dark. Also new are the option al high-tech Matrix Beam LED headlights that recognise oncoming vehicles and extinguish those areas of light coverage that could dazzle them. The space to each side remains well illuminated in full-beam mode. Clever stuff.

The Audi A8’s rivals include the very impressive Mercedes S-class (re-launched at the end of 2013), the BMW 7-series, Maserati Quattroporte and Jaguar XJ. 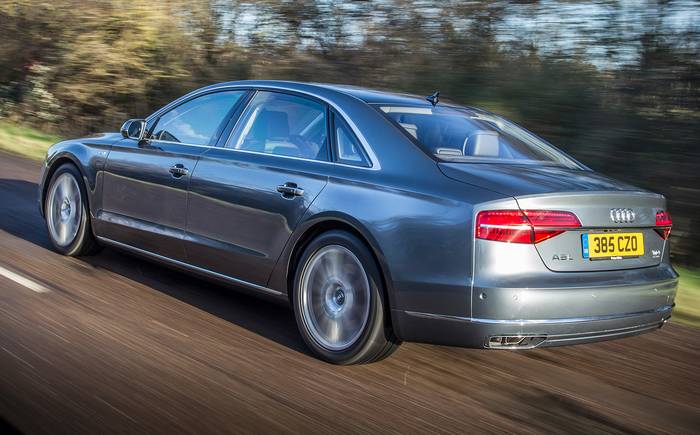 In the highly competitive, image-conscious world of the chief executive, the W12-engined A8 would certainly score well on the one-upmanship stakes, as would the tuned S8. However, we drove the new 3-litre TDI and, frankly, if you’re a motorway driver who wants more punch than this, you’re off your rocker. It’s a smooth, powerful engine that’ll manage 0-62mph in 5.9sec and return 30mpg in town and 40mpg on long runs (the official figure is 47.9mpg combined).

Audi’s quattro four-wheel drive system is standard across most of the model range, the notable exceptions being the hybrid and W12 versions. It means all four wheels work in harmony to keep you locked to the road, even in tricky conditions. Air suspension is standard, making London road humps a breeze. Simply hit the “raise” button and the car lifts itself up to avoid any hint of underside scrapes.

With the suspension hunkered down, and especially in Dynamic mode (chosen via the standard-fit Audi Drive Select system), the A8 feels surprisingly nimble through corners, and even fun to drive. Stick it in Comfort mode and its character changes completely, with the A8 able to glide over road imperfections like a magic carpet. It really is a car of many talents. 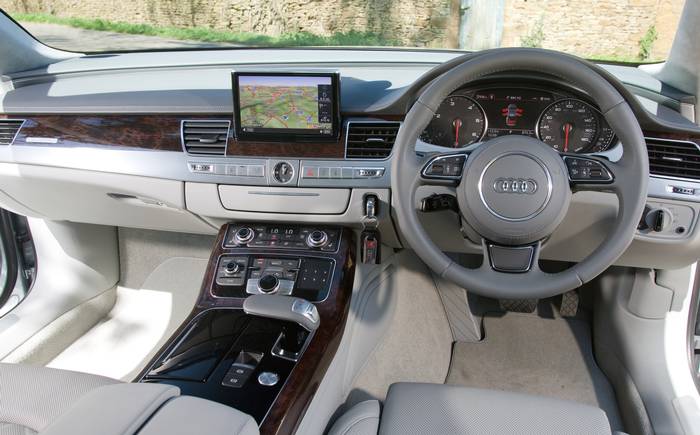 The 2014 Audi A8 is available in a choice of three specifications: SE, SE Executive and Sport Executive. Standard equipment on the base model includes Valcona leather seats, electric heated front seats with four-way lumbar support, a 7in colour screen and excellent sat nav system, DAB radio and Audi’s easy-to-use MMI infotainment system. There are a host of options, of course: a Bang & Olufsen audio system, ventilated front seats, power-assisted door closure and more. Audi will also personalise it all to your tastes, naturally. We liked the five massage settings on the front seats – a snip at £1,600-plus.

The rear cabin of an A8, especially in top-spec, long-wheelbase versions of the model, is a very comfortable place to spend time. It compares favourably with those of the new Mercedes S-class and Maserati Quattroporte, although you couldn’t mistake any of them for the interior of a Bentley or Rolls-Royce. We’re talking top executive, not luxury, cars here.

Still, the A8’s rear seat package, costing over £10,000, does add such luxuries as comfort rear headrests, front passenger seat adjustment from the rear, electrically adjustable lumbar support for outer rear seats and 12-way electrically adjustable reclining seats with footrests. Essential stuff if you’re planning to convey the likes of Cameron Diaz, but not if it’s to be used as a family car.

And sometimes less, is more. For example, it’s possible to spend hours fine-tuning your high-tech seat via its infinite range of adjustment without ever feeling truly happy. And the quattro system, however useful in all types of weather scenarios, means the central tunnel between the driver and passenger is filled with mechanical parts, depriving the car’s occupants of cubby hole space for those lavish, after-show party bags.

What to look out for when buying a used Audi A8

Audi’s reputation for superb reliability and great ease of ownership is borne out by the fact that the third-generation A8 has yet to notch up any inherent fault patterns, and just to confirm the thoroughness of its engineering, there has only been one factory recall (in late 2010) which concerned possible breakage of the glass sunroof.