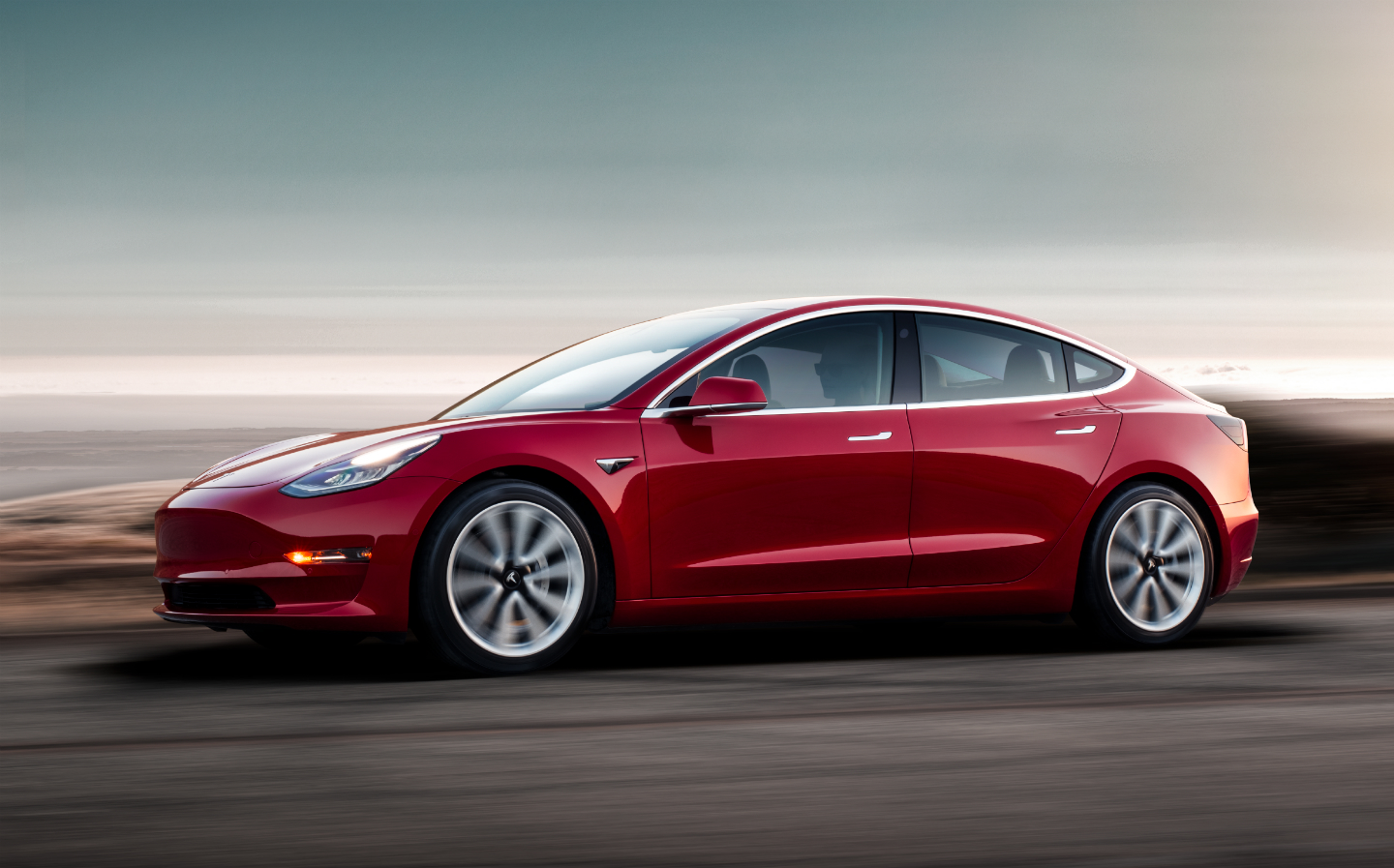 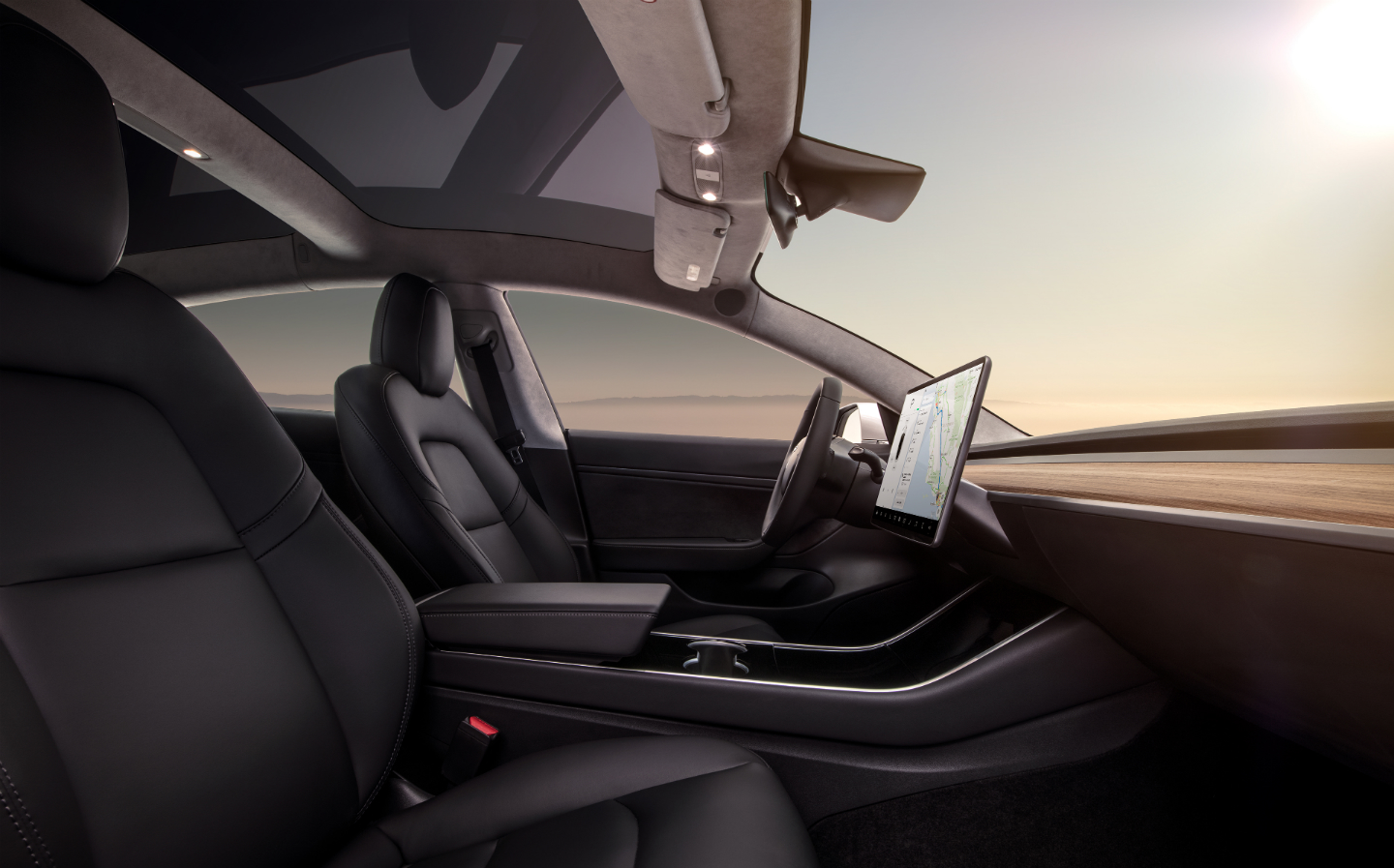 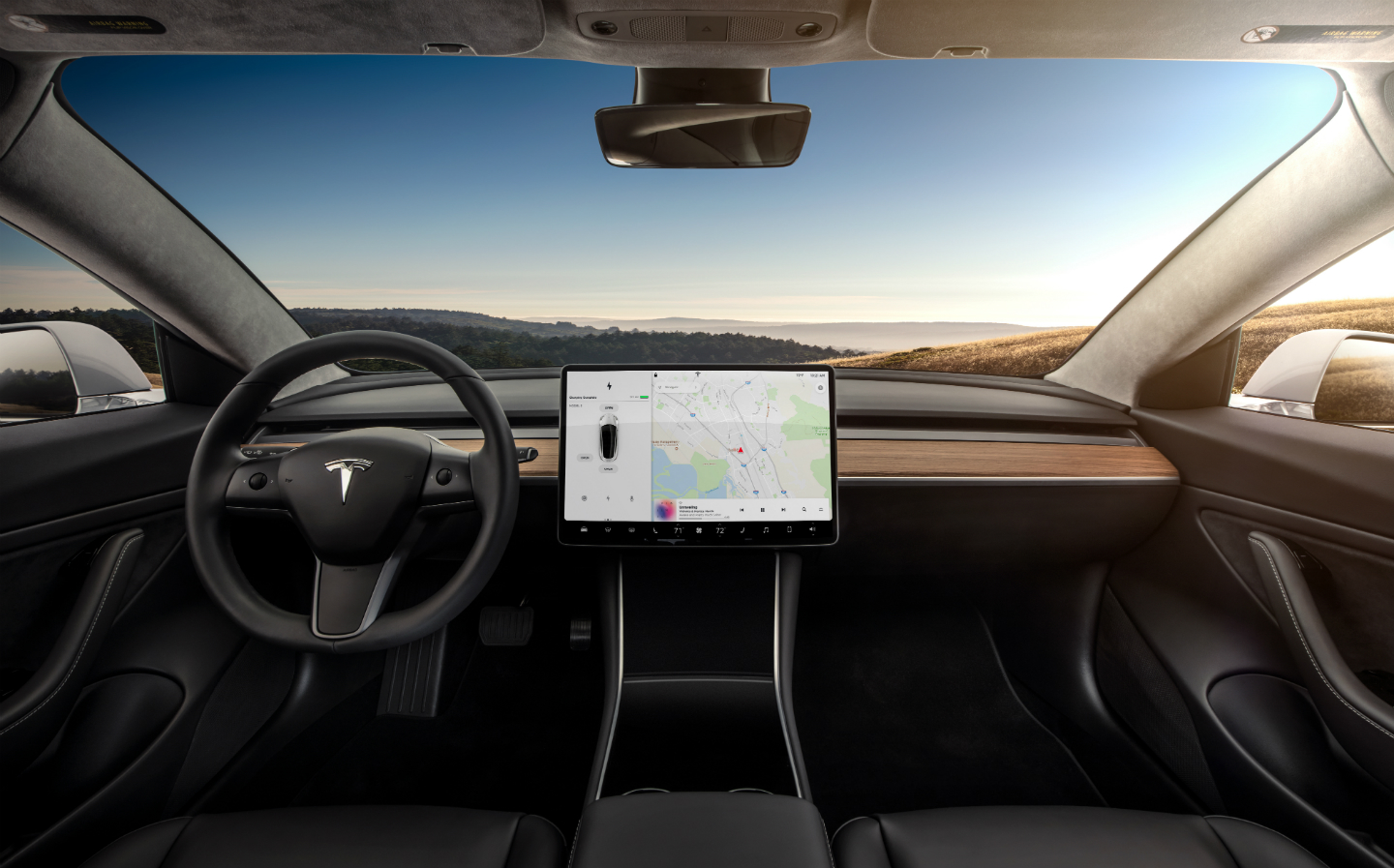 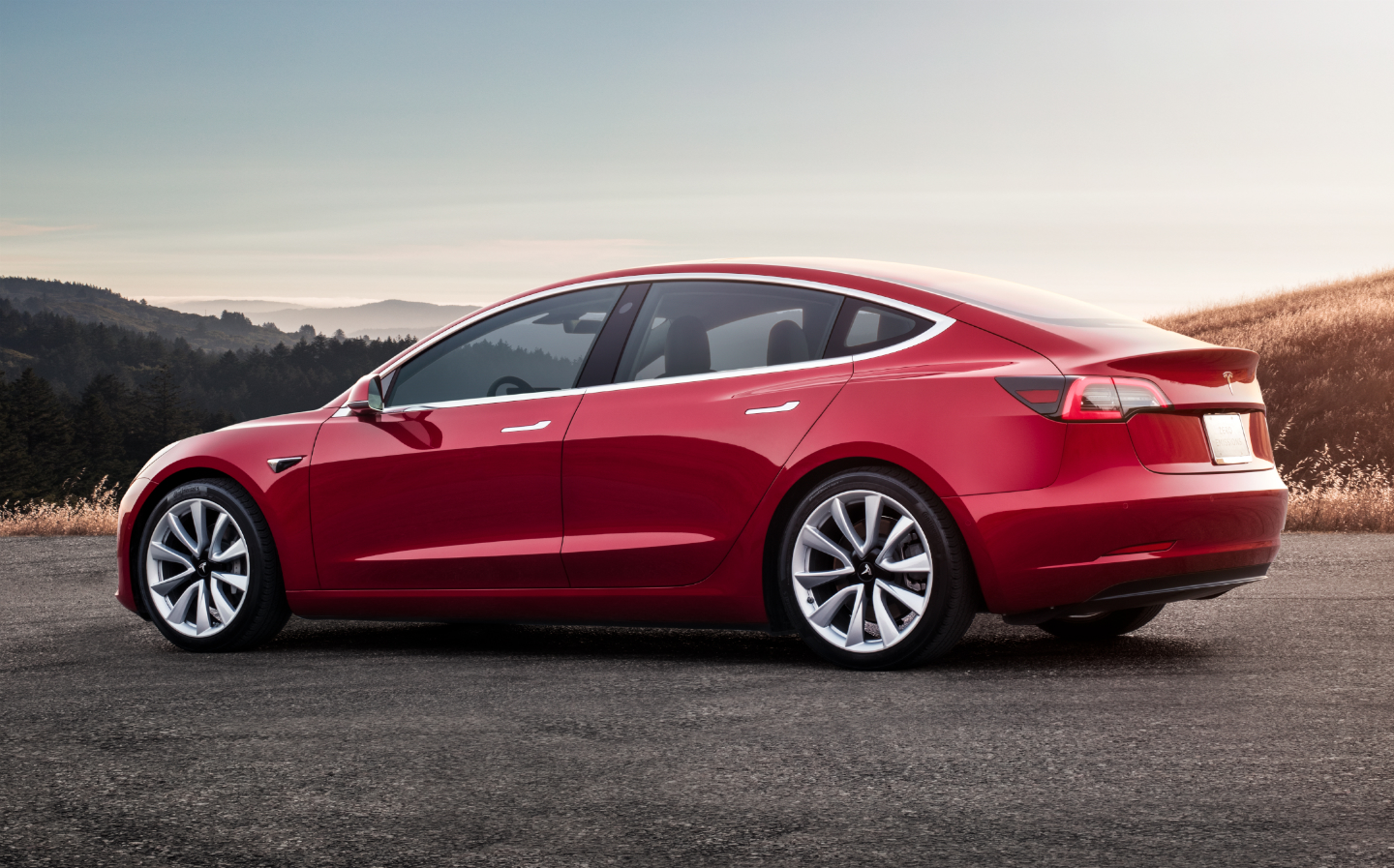 By Alistair Weaver
Share Article
Clever, quick, more affordable, excellent range
At a glance
Pros
Impressive range
Very spacious
Easy and fun to drive
Cons
Firm ride
Huge touchscreen can be frustrating to use
It will likely be pricey when it goes on sale in the UK
Specifications
Cars > Tesla > Model 3

THE MODEL 3 was supposed to be to Tesla what the Model T was to Ford: a revolutionary product that would bring a new mode of transport — in this case electric cars — within reach of the masses. At the US launch in 2016, Elon Musk, the company’s boss, gave a $35,000 (£26,000) starting price — roughly the average cost of a new car in the US.

He recently reiterated his promise, announcing he was closing Tesla showrooms to reduce costs and enable him to hit the target price. Until now, the cheapest version in the US cost $42,900.

There’s no official UK price yet, and the cars won’t arrive until the second half of this year. It seems certain, though, that the cheapest Model 3 will be an all-wheel-drive model that will cost close to £50,000, and the top-rated Performance variant will sell at more than £60,000. That is significantly more expensive than its rival the Kia e-Niro (£36,495), which has a similar range, and puts it in the territory of the Jaguar I-Pace, which starts at £64,495.

In parts of America Model 3s are common, and I’ve been driving one in Los Angeles for the past year in my role as editor-in-chief of Edmunds, a car shopping website. In March 2016 a member of the editorial team queued — like other Tesla fans — through the night to place an order for a Model 3, paying a $1,000 deposit. Nothing happened until 21 months later, when we were asked to configure the car. We spent $56,000. It duly arrived in January last year, and since then we’ve covered 15,000 miles, with plenty of highs and lows.

Let’s start with the basics. To look at, the Model 3 is a conventional four-door saloon. It doesn’t try to be wacky like the Toyota Prius, and if you didn’t recognise the badge, you wouldn’t guess it was an electric car. Inside, it’s much more interesting. Musk is a natural disruptor, and Tesla is cast in his image. To open the door you use a smartphone app or hold the credit-card-like key next to a sensor on the B-pillar (the central roof post).

The cockpit is simplicity itself. In the driver’s line of sight is a steering wheel, a couple of column stalks and, er, that’s it. There aren’t any buttons on the centre console, just a pair of cupholders and some rubbish bins. If you’re a fan of minimalism, you’ll love the Model 3.

Everything important is controlled by the 15in touchscreen bolted to the centre of the dashboard like an escapee from an Apple factory. Adjusting the steering wheel, checking your speed, making a call and listening to the radio are all controlled by Tesla’s bespoke software.

It’s a mix of inspiration and infuriation. The Google Maps-based sat nav is brilliantly simple to use. But searching the menus to adjust, say, the windscreen wipers is a distraction, and for the speedo to be mounted in the centre of the car is madness. It remains to be seen how Tesla will reconfigure the layout for right-hand drive.

If you’re a fan of minimalism, you’ll love the simplicity of the Tesla Model 3’s interior

No doubt to Musk’s frustration, you can’t change the shape of human beings, so the rest of the cabin is more familiar. With no need to accommodate an engine in the front, there’s a “froot” to complement the large boot. The Model 3 is roughly the size of the Mercedes C-class, but it’s more like an E-class inside, with plenty of room in the back.

The gearlever is on the steering wheel, and after you select D you’ll only really need one pedal. So strong is the regenerative braking — which recoups energy to top up the battery and kicks in when you stop accelerating — that you need the left pedal only for hard stops.

The current cheapest Model 3 has an electric motor at the back to drive the rear wheels. The dual-motor version has a bigger battery and all-wheel drive. Tesla claims that in Performance trim the dual-motor car is capable of 0-60mph in 3.5 seconds, which is Ferrari fast. The less egotistical will find the standard car quick enough — 0-60mph takes 5.6 seconds — and because maximum pull from the electric motor is instantaneous, it feels even faster.

It’s an easy and fun car to drive, with quick-witted steering and secure handling. The Model 3 doesn’t pretend to be a sports car, but there’s still a novelty about something so quick being almost silent. Most of the time it’s comfortable, but the ride can occasionally feel a bit stiff on poor surfaces — a warning to those who live near potholed roads.

When the Model 3 was launched, Musk made bold claims about the optional Autopilot system, but it is really just cruise control with automated steering, much as in many other cars. It’s definitely not an excuse to take your hands off the wheel.

Enthusiastic claims were also made about the Model 3’s range, which Tesla says is 264 miles on the American EPA test for the mid-range battery (although this is now discontinued; the standard battery has 220 miles on the EPA test) and 338 miles for the long-range (on the WLTP test).

Running a long-range battery for a year has given Edmunds a good understanding of real world range: in LA traffic we’ve been achieving a range of more than 200 miles — enough for most people. Bear in mind, though, that California has a warm climate and battery range can drop markedly in the cold.

More of a concern has been the car’s reliability, or lack of it. For the first few months of ownership our Model 3 was beset by problems, ranging from gear selection and braking performance to Autopilot, sat nav and the rear-view camera. There was even a gremlin that randomly turned the radio on at high volume, whether the car was occupied or not.

There’s no official measure on the Tesla Model 3’s range, but we’ve been achieving more than 200 miles on a single charge

Depending on your point of view, these are either evidence of carelessness or imperfections that you’d expect from a company that, founded in 2003, is merely an infant in car manufacturing terms. For Tesla to have come so far in such a short time, and to have most of the car industry trailing in its wake, is such an astonishing achievement, who wouldn’t want to cut Musk some slack?

Ours was an early car, and free software updates appear to have fixed most problems. Many tech companies launch products before they’re fully developed and let early adopters identify the bugs. That might work for a phone, but should it be applied to something the size and weight of a car?

Despite this, the Model 3 was the bestselling luxury car in the US last year, with 145,846 sold, more than twice as many as the Mercedes C-class.

Now Musk and co are pursuing similar success in the rest of the world. With new models due from Audi, Mercedes and Porsche, plus a host of mainstream marques, the electric car market is becoming ever more competitive. Tesla is about to lose first-mover advantage, but we wouldn’t bet against Musk.

The enigmatic billionaire has a Trump-like ability to polarise opinion. One minute he’s being hailed a hero for building a company that was worth more than General Motors; the next he’s being forced to resign as chairman and pay a $20m fine after making false claims about taking the company private.

It’s such a soap opera, you can easily forget that Tesla builds cars — and clever ones at that.