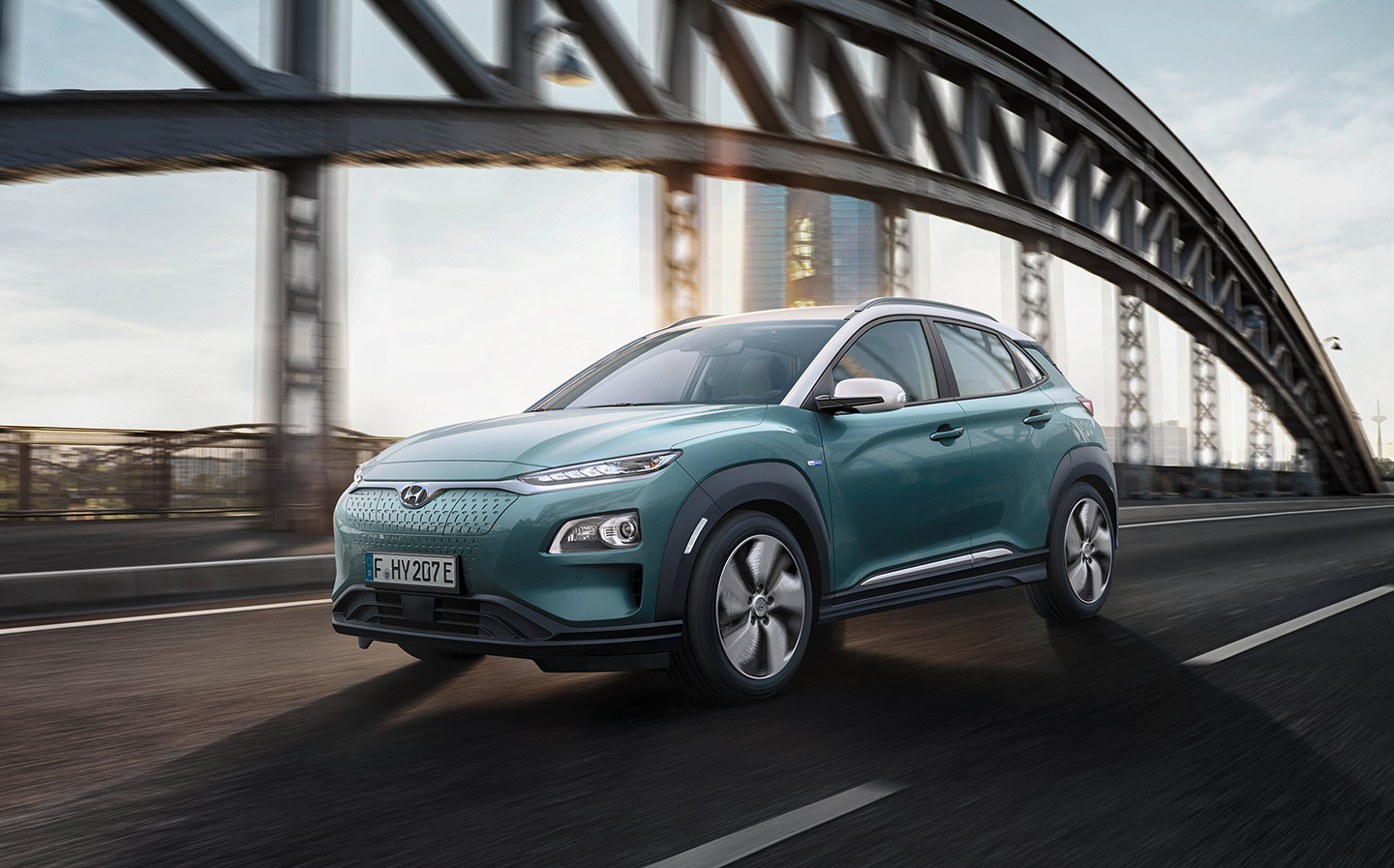 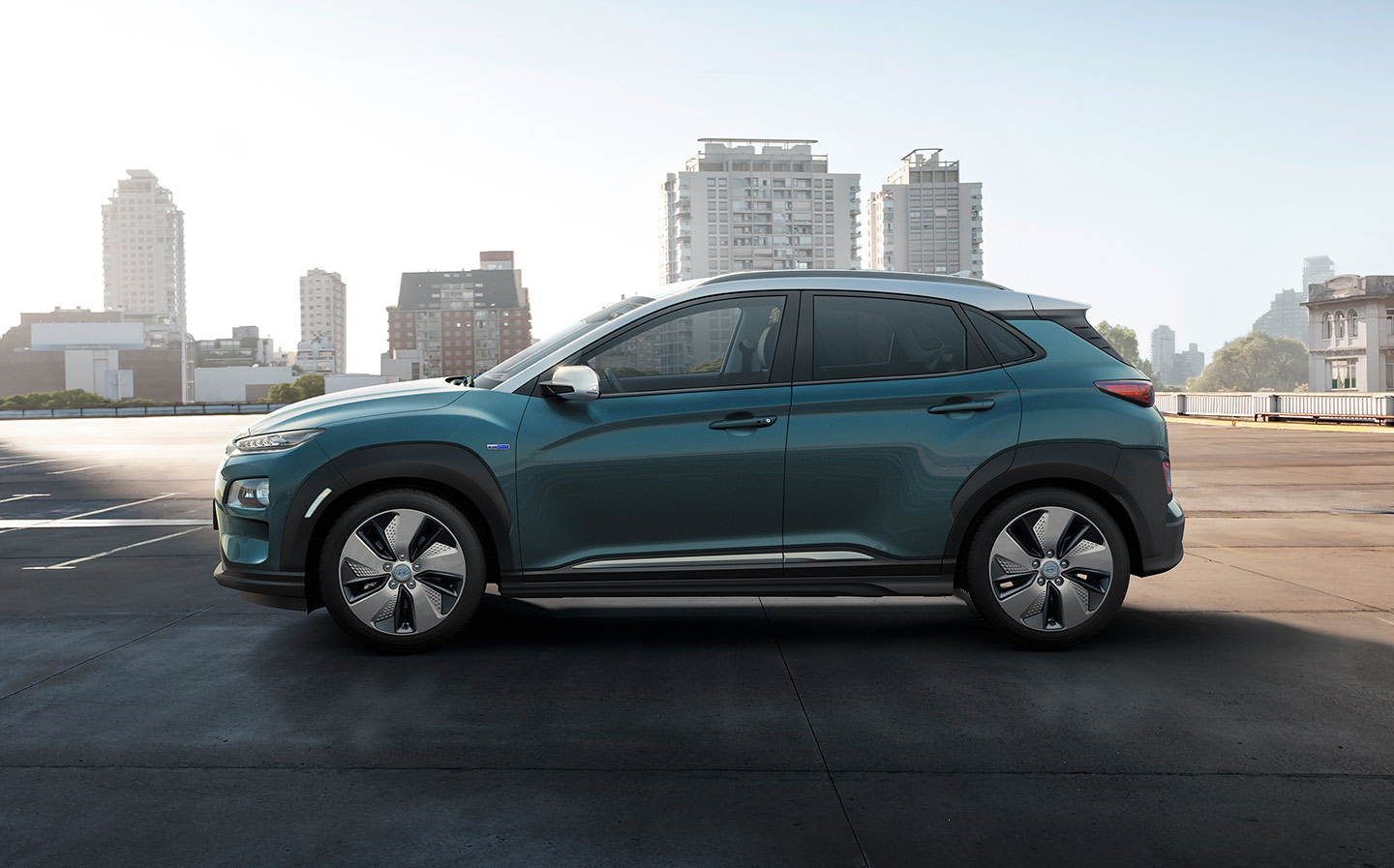 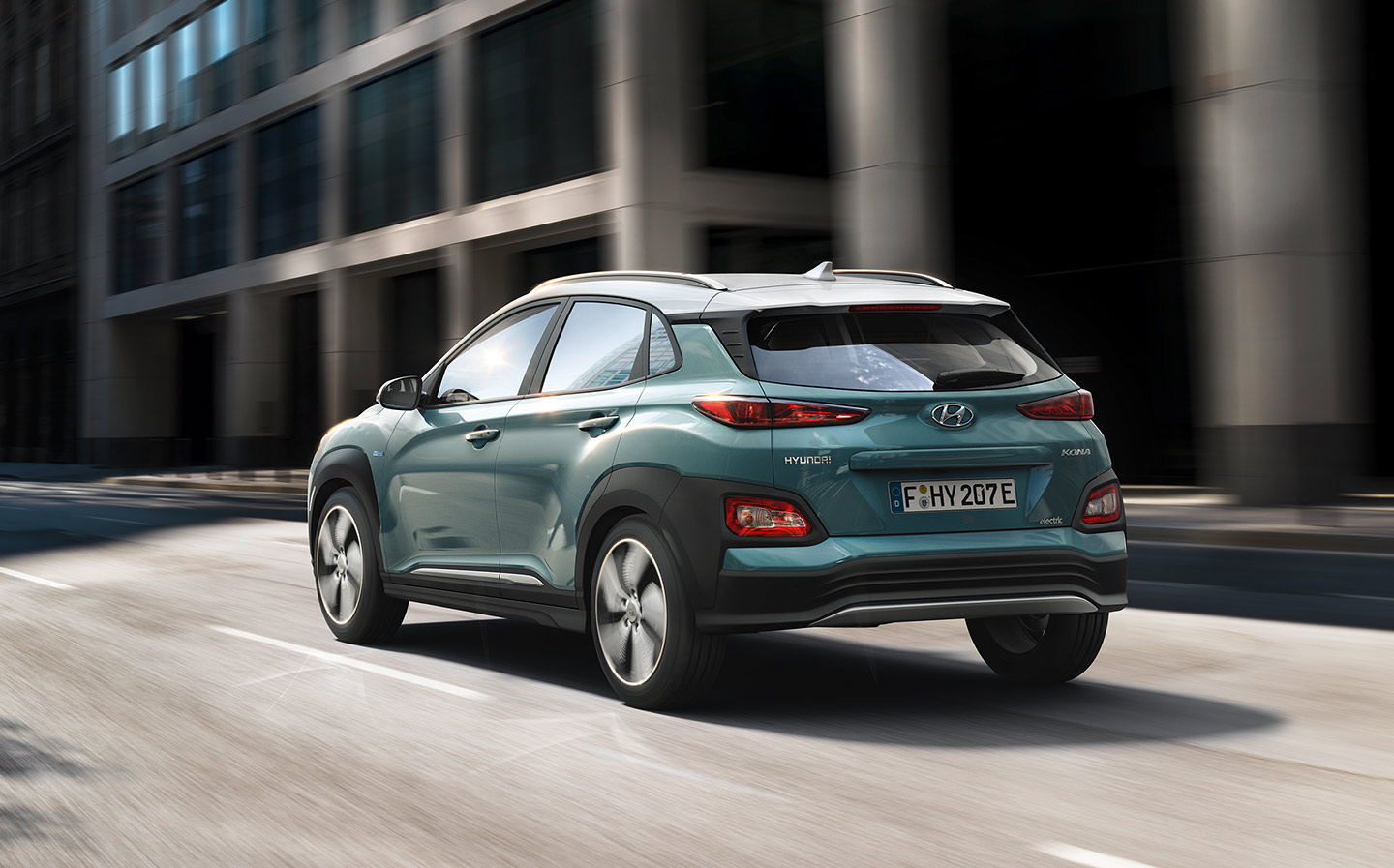 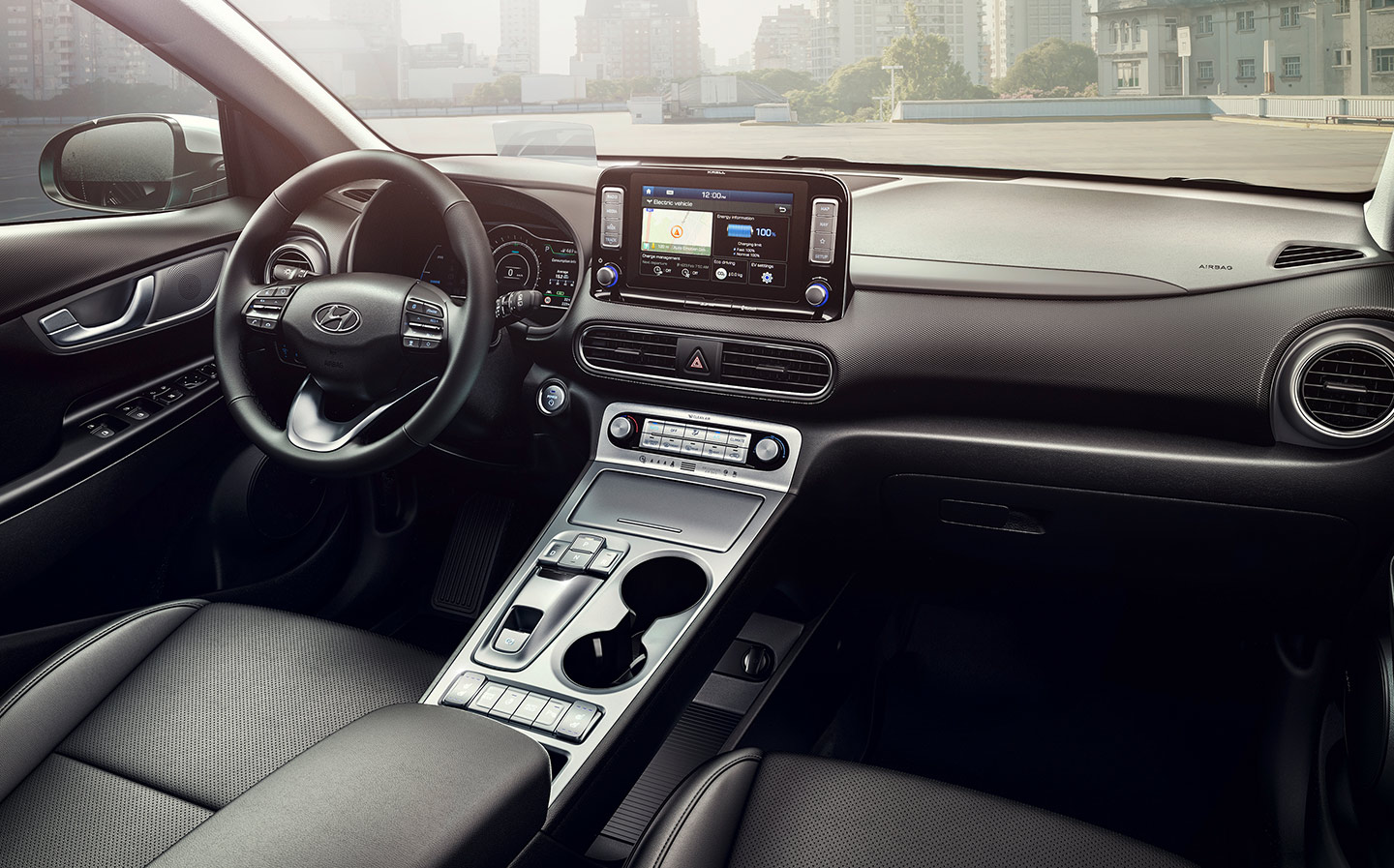 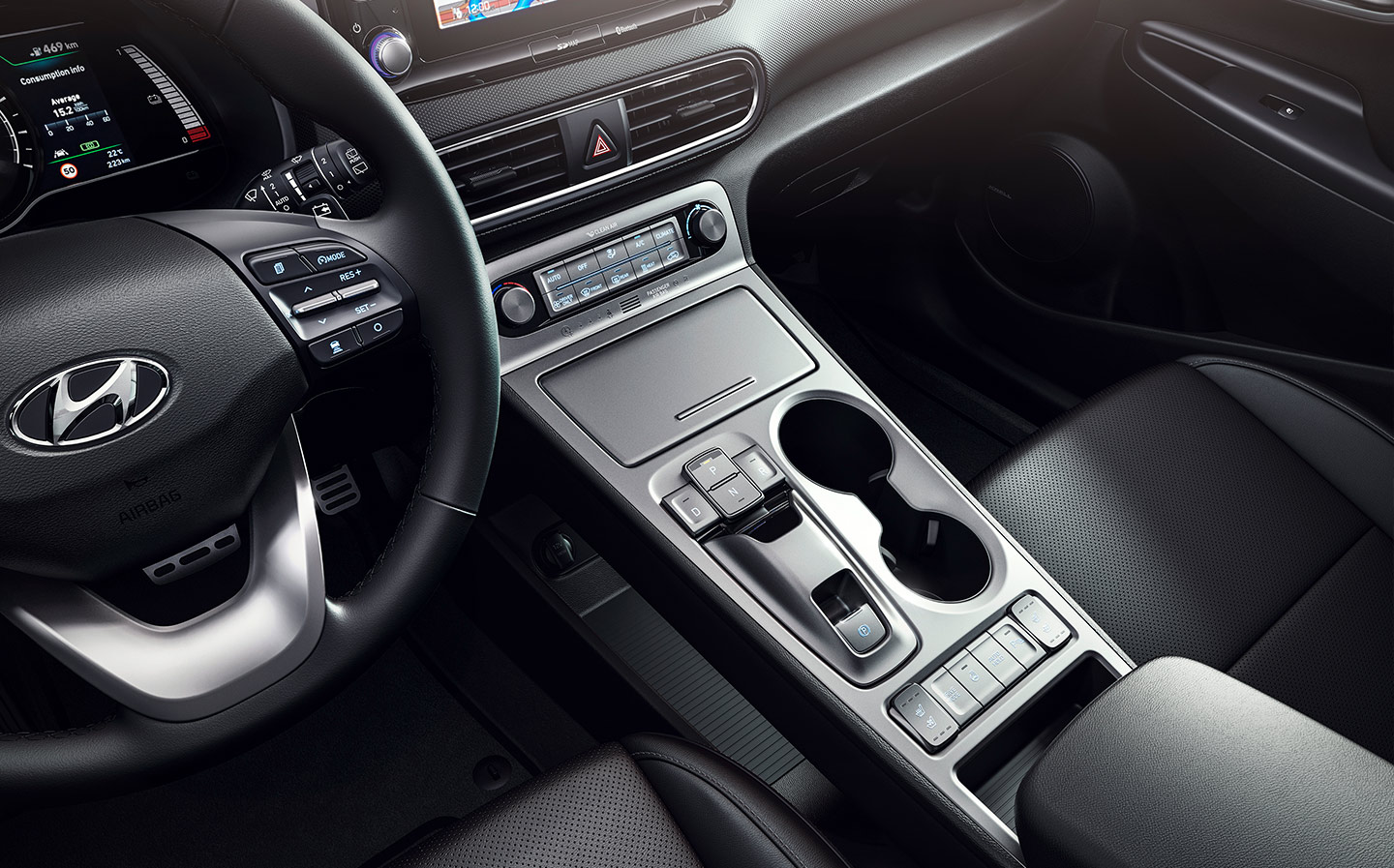 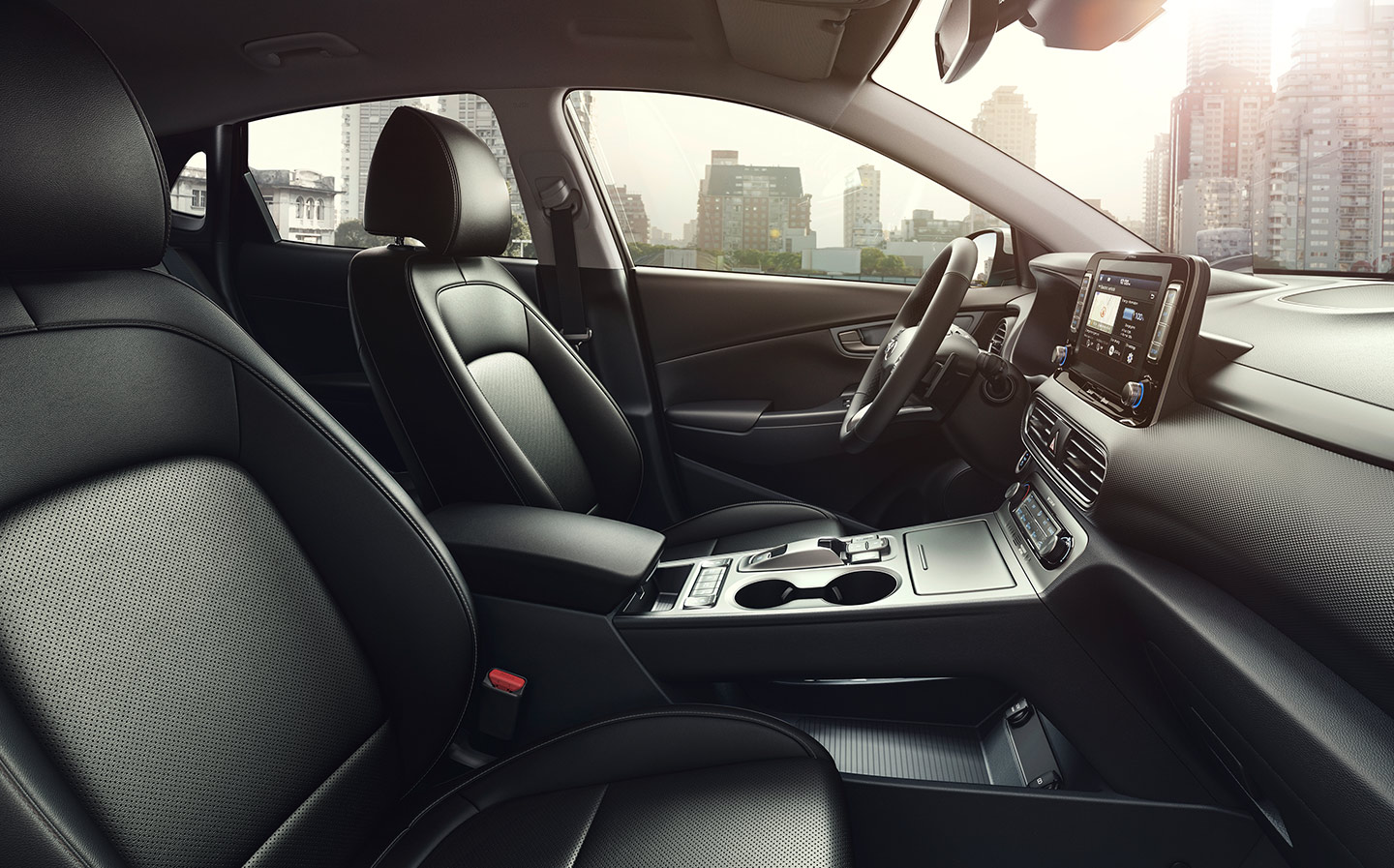 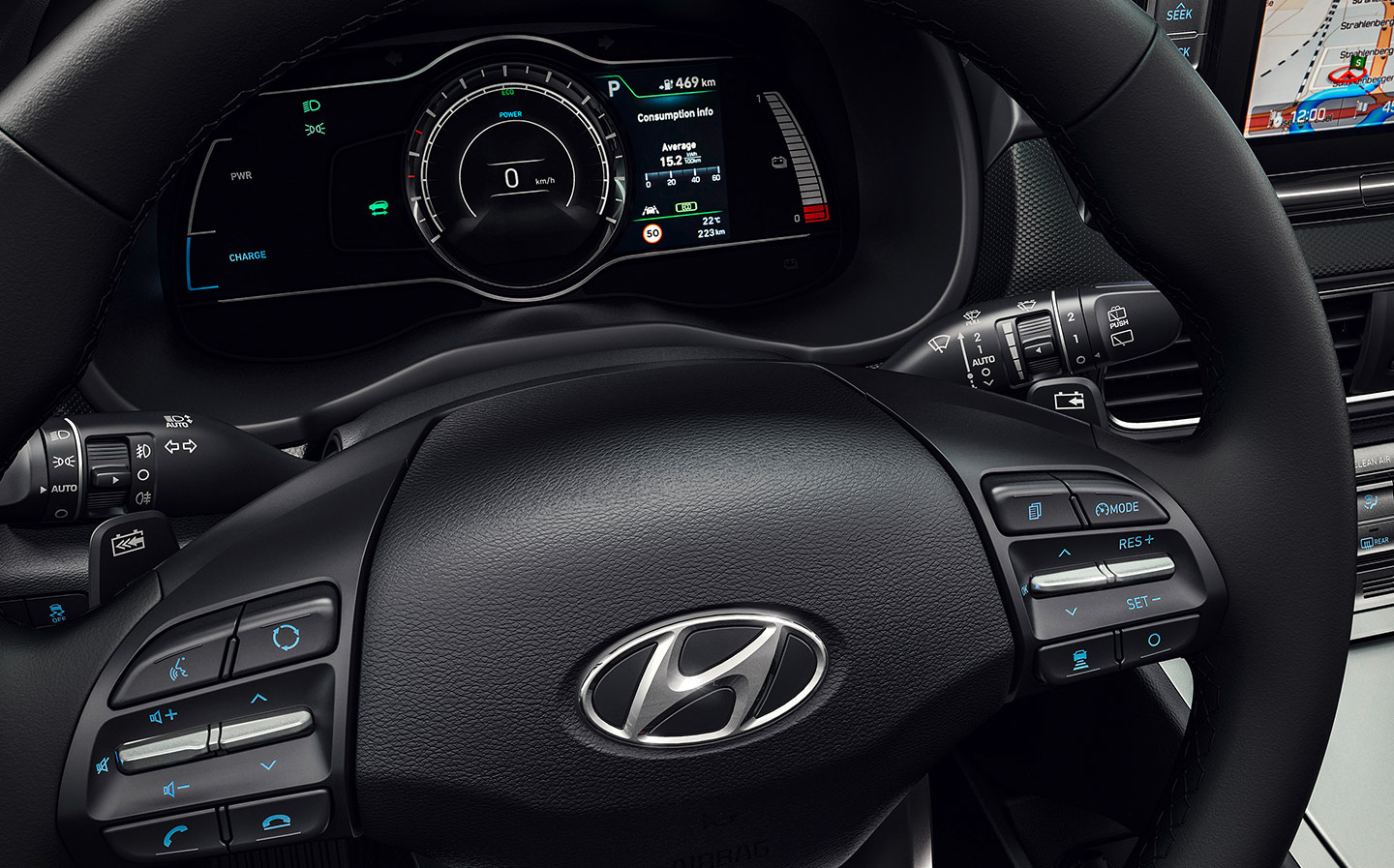 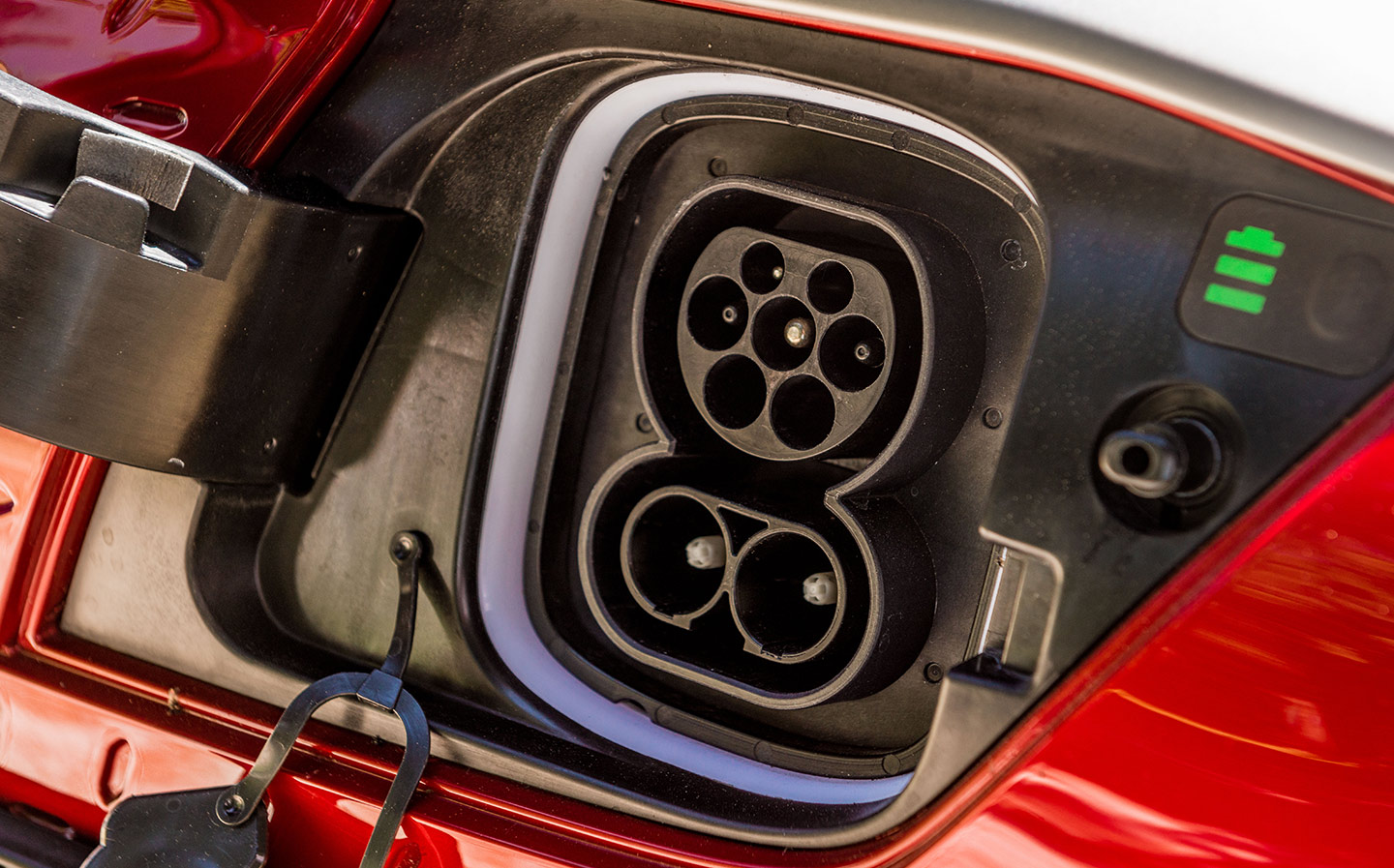 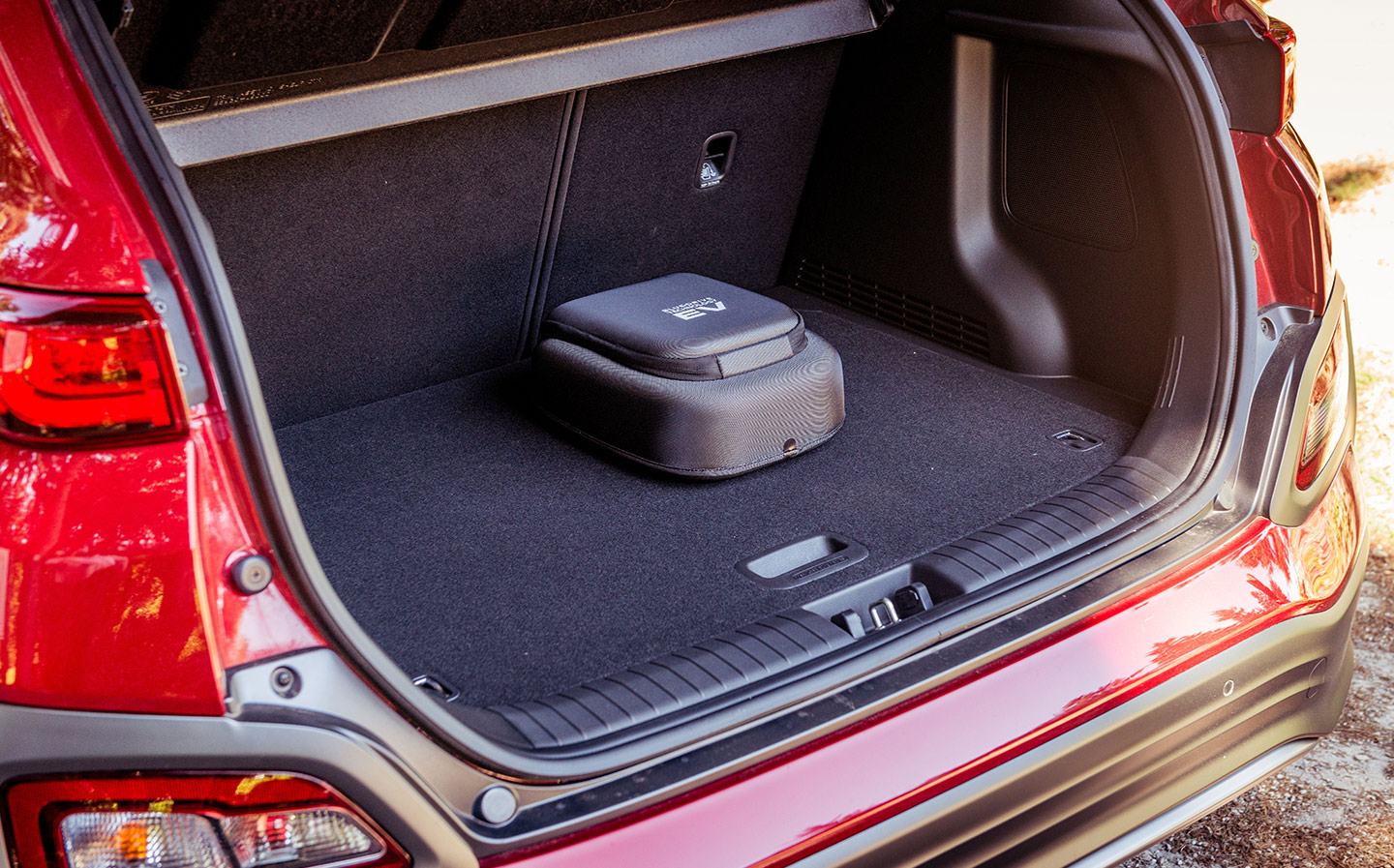 By Will Dron
Share Article
Great, if you can get hold of one
At a glance
Pros
Looks good
Genuine 250 miles between charges
Lots of tech
Cons
Disappointing interior quality
Cramped in the back
Current 12-month waiting list
Specifications
Cars > Hyundai > Kona

AROUND a decade ago the likes of Nissan and Renault were struggling to convince car buyers that electric cars offering less than 100 miles of range were good enough for their daily driving needs. The argument was that the average motorist covers less than 30 miles per day.

The average motorist wasn’t convinced, however, and neither was Elon Musk. The Tesla Motors founder began producing cars capable of travelling three times that distance between charges. The Roadster was also much faster and sexier than the likes of the Nissan Leaf and Renault Fluence Z.E. (remember that?).

It was Tesla more than any other car maker that banished the idea that electric cars were glorified milk floats. Teslas were genuinely desirable. Then they made them practical, with the Model S and Model X. And most recently, with the Model 3, Tesla has made long-range electric motoring relatively affordable; prices announced this week put it upwards of £39,000, after the UK plug-in car grant (PiCG).

Of course, eventually the established brands were going to catch up with the American upstart; we’ve already seen a sprinkling of high end rivals arriving on the market but the first serious threat to Musk’s world domination with the Model 3 is arguably coming from South Korean sister brands Kia and Hyundai, with a pair of affordable, long-distance pure-electric models: the Hyundai Kona Electric and Kia e-Niro.

Hyundai’s effort, which you can see here, is a five-seat crossover with a range of up to 279 miles per charge (the Model 3 is rated at between 258 and 348 miles per charge, depending on the version) and a price of under £32,000 (including the PiCG) for the 64kWh battery model. There’s also a model with a smaller battery that has a range of 180 miles and costs around £26,000.

That makes both versions of the Kona Electric even more affordable than the Tesla, and  unless you drive more than 250 miles on a daily basis or can’t plug in at home (which, let’s be honest, makes any kind of electric car less than convenient) genuinely practical.

Given all that, you might expect to have seen one on the road by now (orders opened last August, with first deliveries a few weeks after that) but in fact they’re rarer than trustworthy members of Theresa May’s cabinet: only 200 had been delivered to customers as of the middle of March. Another 800 had been sold, we were told, and demand has been outstripping supply to such an extent that there’s now a 12-month waiting list (although Hyundai UK is fighting for more cars so that they can beat that delay). This forced Hyundai UK to temporarily pull it from sale.

The situation came to a head in comical fashion, according to the rumour mill, during a session to discuss the UK’s limited allocation of Kona Electrics from the factory in Korea. Suddenly, so it goes, the doors flew open and a huge stack of papers were dropped on the desk in front of an astonished group of managers. “Hold everything!” came the panicked voice. “These are our orders to date.”

So rather than having a problem finding homes for the plug-in Kona, Hyundai’s (and Kia’s) biggest problem (and Tesla’s greatest hope) is under-supply, with the particular bottle neck being production of the battery pack.

The crucial question, then: is it worth waiting 12 months for a Kona Electric?

Well, it’s not a bad-looking car, it has to be said. There’s a petrol Kona, too, but the electric model marks itself out by doing away with the traditional grille (unnecessary seeing as there’s no engine to cool) and replacing it with a pockmarked panel in body colour. The charging port is found here, rather than on one or other sides of the car, which can help when parked nose-first towards your home charging unit.

While the outside is smart, the inside is not likely to impress those with an eye on a Tesla, nor those who currently own a £30,000-£40,000 Audi or BMW, it has to be said. The Hyundai is more Toyota Prius than Model 3, with lots of cheap-looking plastics and uninspiring instrument displays. Think Goodmans hi-fi, not B&O sound system.

The layout is very different from that of the petrol Kona, too — the fossil-burning model’s cabin is more traditional (and classier, in our opinion). That said, it’s easy to get to grips with, uncluttered and solidly fitted, and the lower tier in the central sole is a useful storage space, with a 12v and USB socket, that allows you to keep the cabin from looking messy.

Android Auto and Apple CarPlay were available on our Premium SE-spec test car, and it integrates well with buttons around the edge allowing you to go back to the built-in operating system easily. Hyundai’s own operating system is simple to find your way around, if a little slow to react, with sat nav, DAB and so on. The stereo’s audio quality is decent but not stand-out.

There are also a number of electric car-specific menus, including a map that shows how far you can drive in any direction before the charge runs out with a circle around. When I looked, it said I had enough range to get to Paris; something we didn’t have time to test, sadly.

The Kona Electric is packed with other tech features. There’s blind spot detection, lane-keep assist, adaptive cruise control, reversing camera and a head-up display (although adjusted for lanky people like me, the information was displayed over the gap between the bonnet and the windscreen, which made it difficult to read).

The seats are comfortable if not terrifically supportive, and not just heated but cooled, too. Even the rear seats are heated. It’s quite cramped back there, though — with a child seat installed, the back of the driver’s chair was touching its ISOFIX base meaning I’d have had to slide my pew forwards when the kids were in the car. I was too close to the pedals for my liking even with the seat all the way back. Taller adults will feel cramped in the back, too, not only for legroom but also headroom.

Those concerns aside, it’s a decent car to drive. In standard mode the steering is very light and there’s a lack of feel through the wheel, but most customers will just appreciate how easier it is to manoeuvre around town. For a more engaging driving experience, you can stick it in Sport mode, which adds weight to the steering and sharpens the throttle, although that does seem to reduce the range considerably.

Either way, the Kona Electric is quick away from the lights by the standards of most family cars, with a 0-62mph time of 7.5 seconds — that’s nowhere near Tesla quick but it’s certainly very nippy, particularly up to 50mph.

The ride is a little jiggly over broken surfaces, but in general it smoothes out bumps well, and despite mild understeer while cornering at speed, there’s plenty of confidence-inspiring grip through turns. Even though there’s a petrol Kona, Hyundai managed to fit the battery pack under the floor resulting in a low centre of gravity (and therefore more stable handling).

In the real world, that battery pack proved very impressive, if not quite up to the official 279 miles. With a full battery it was projecting around 250 miles of driving before a cold February morning commute, and after nearly 30 miles on a mix of A-roads and London backstreets there were 211 miles indicated left in the battery. I had been using the air conditioning (initially to defrost), heated seat, heated steering wheel, too.

I had averaged 3.6 miles per kilowatt-hour in the Kona Electric, which compares with around 3.9kWh from the smaller, lighter Renault Zoe R90 with a 41kWh battery.

When the battery does get low, there’s also a menu that tells you how long it would take to recharge the battery to 80% or full using different types of charger, which is useful. What’s more, it tells you what percentage of the battery demand is being taken up by different vehicle systems, such as driving and air conditioning. Your partner may not thank you for switching off the air con but at least you can point out how much energy you’re saving by doing so. It’s something to discuss at marriage counselling, at least.

Charging the larger 64kWh battery from empty to 80% full takes 75 minutes using a 50kW rapid charger, such as you’d find at a motorway service station, but most owners will charge at home most of the time, where a dedicated wallbox will fill the battery in nine hours and 35 minutes. Assuming you’re not driving 250 miles every day, an overnight charge should result in a full battery when you wake up.

So back to the burning question: wait for the Kona Electric or look elsewhere? With a 12 month waiting list, you’d be mad not to look around but while there are plenty of electric cars to pick from now there aren’t many with over 250 miles of range; certainly not at this price.

The obvious answer is the Kia e-Niro, which has an advertised electric range of 282 miles and is priced very similarly, but of course you’ll face the same delay as the two sister cars roll off the same production line.

That leaves the Tesla Model 3, which is pricier but also much quicker and potentially able to get you even further between charges. And, if you order a basic model today, Tesla is claiming you’ll have it delivered in June.

So Hyundai have produced the first viable answer to Tesla’s Model 3… but not enough of them to go around. In such a fast-moving car market, that could prove to be a big problem for the Kona Electric’s prospects.