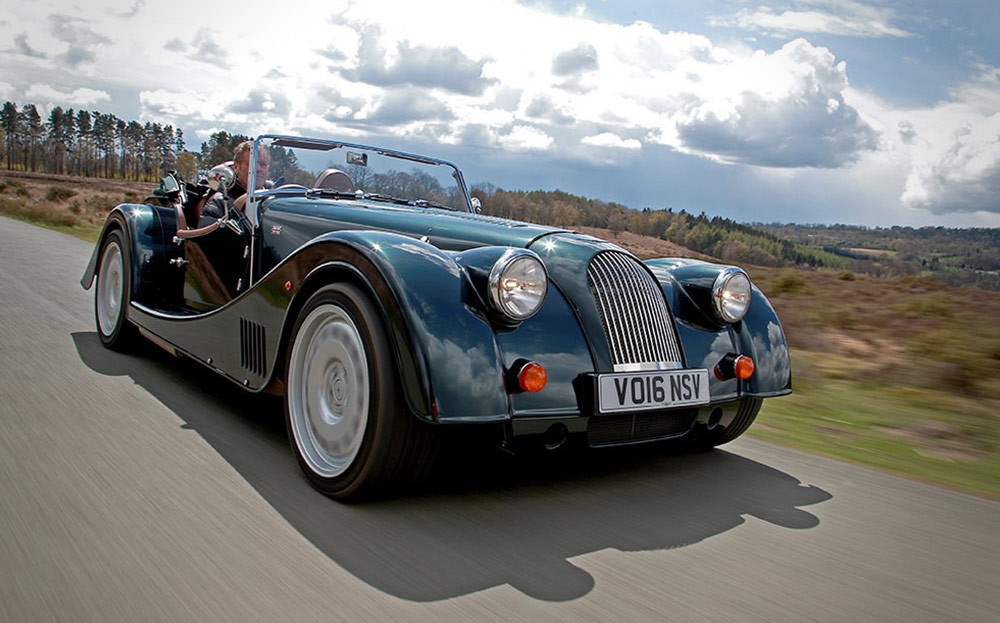 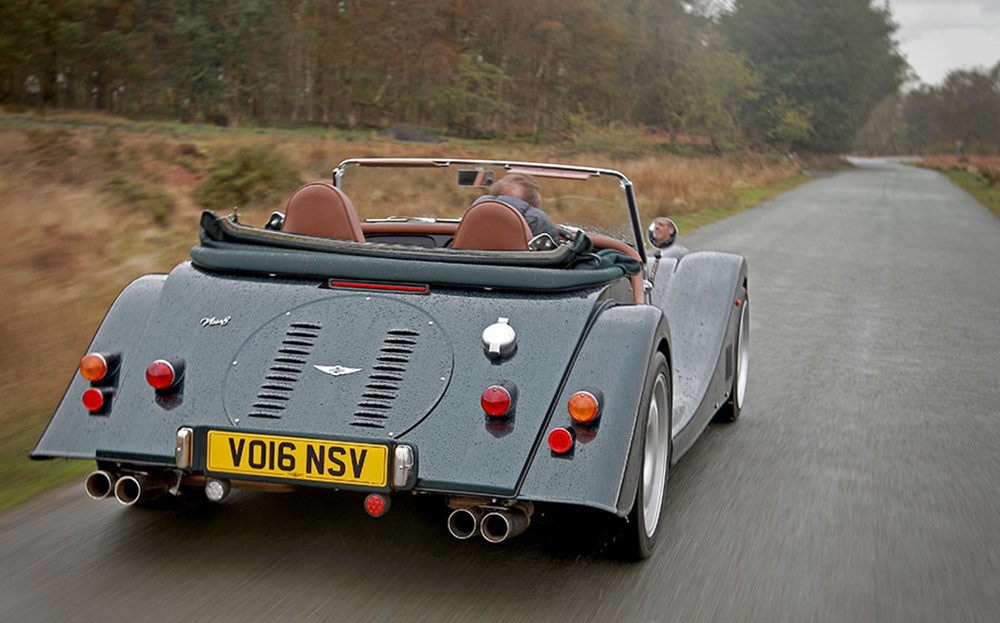 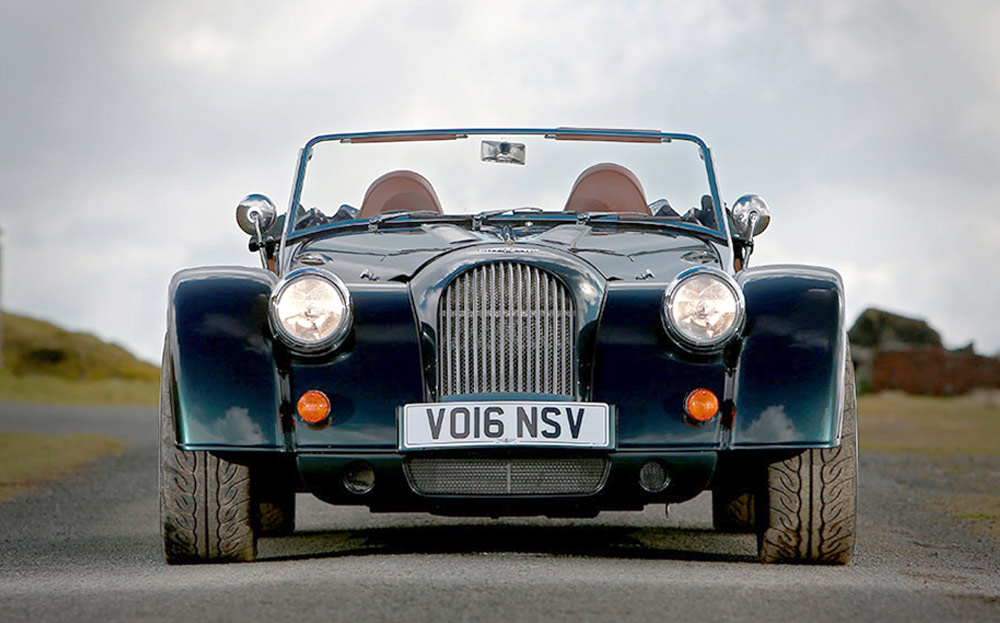 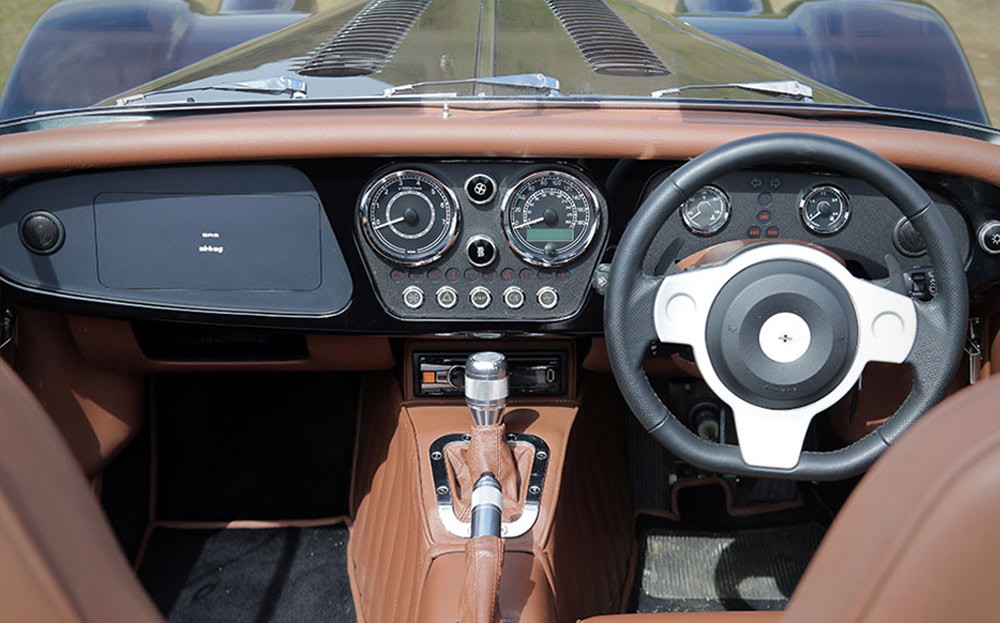 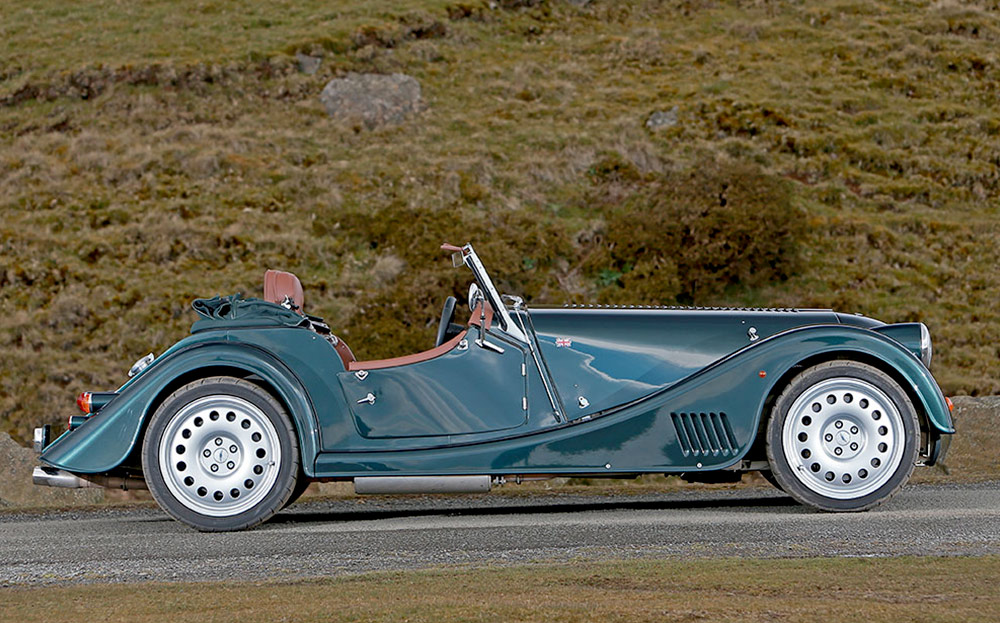 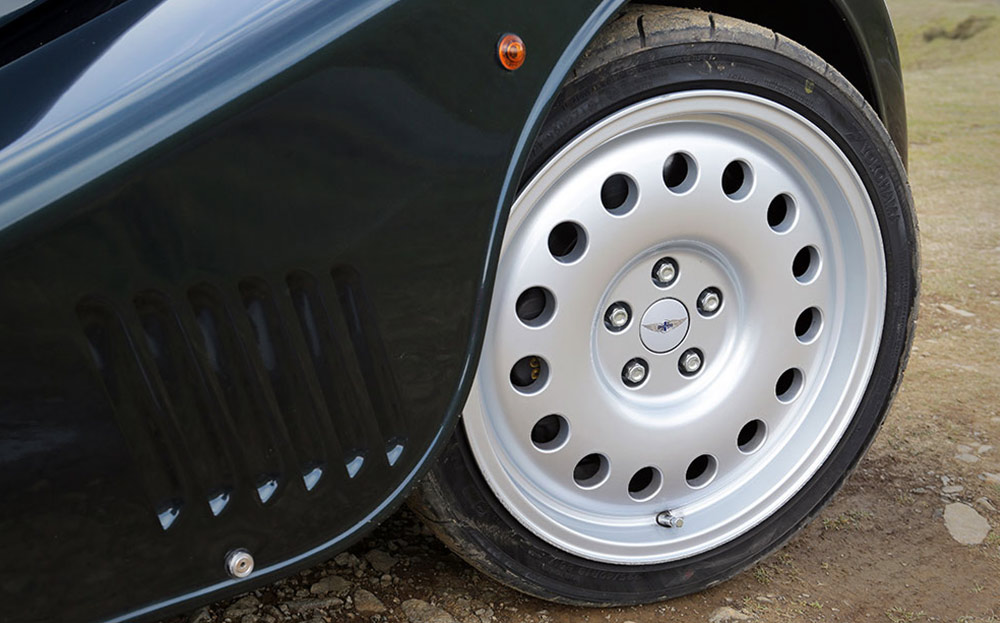 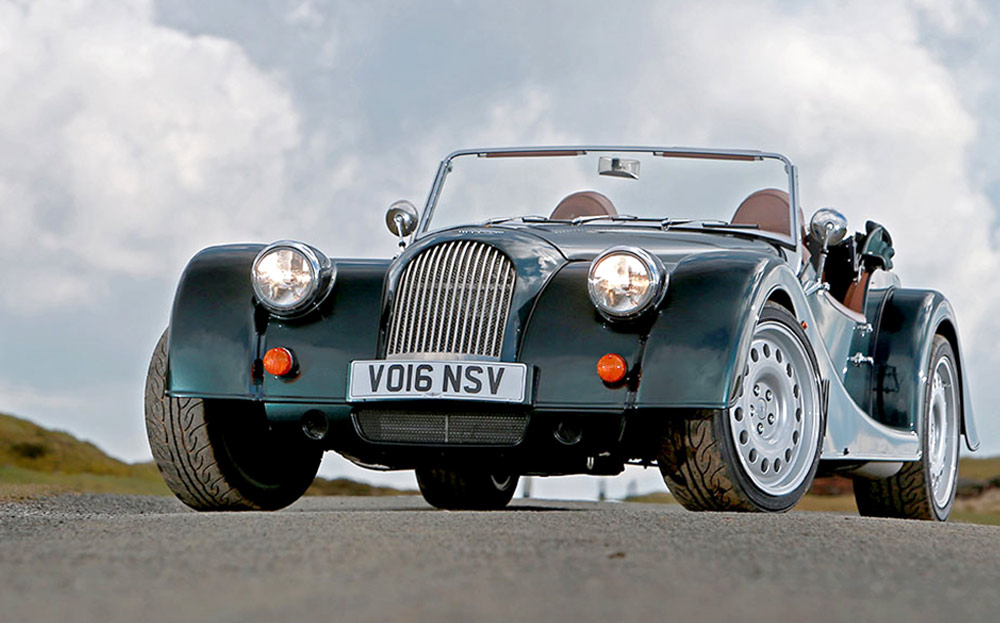 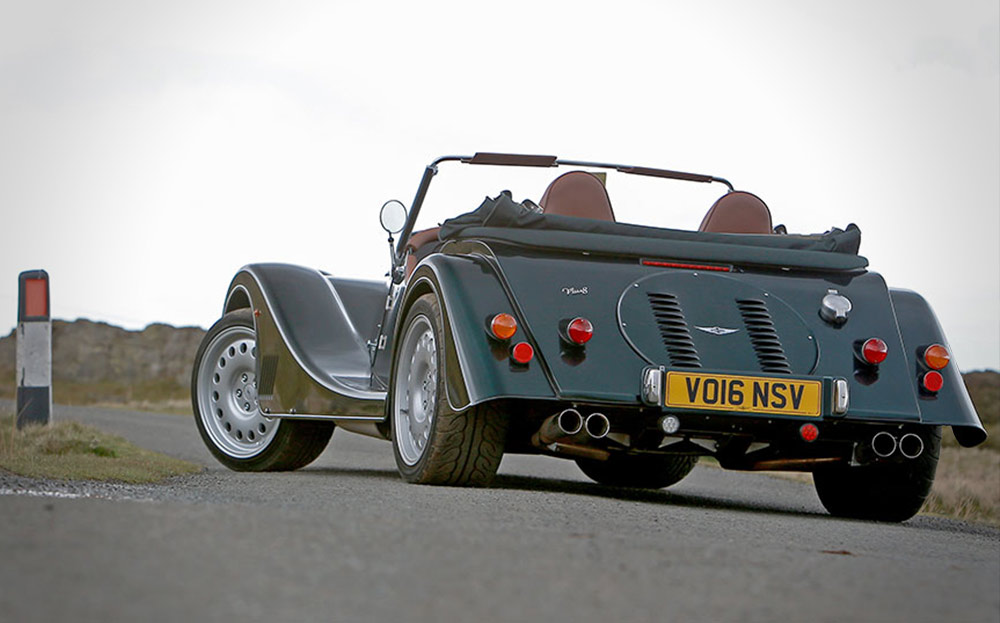 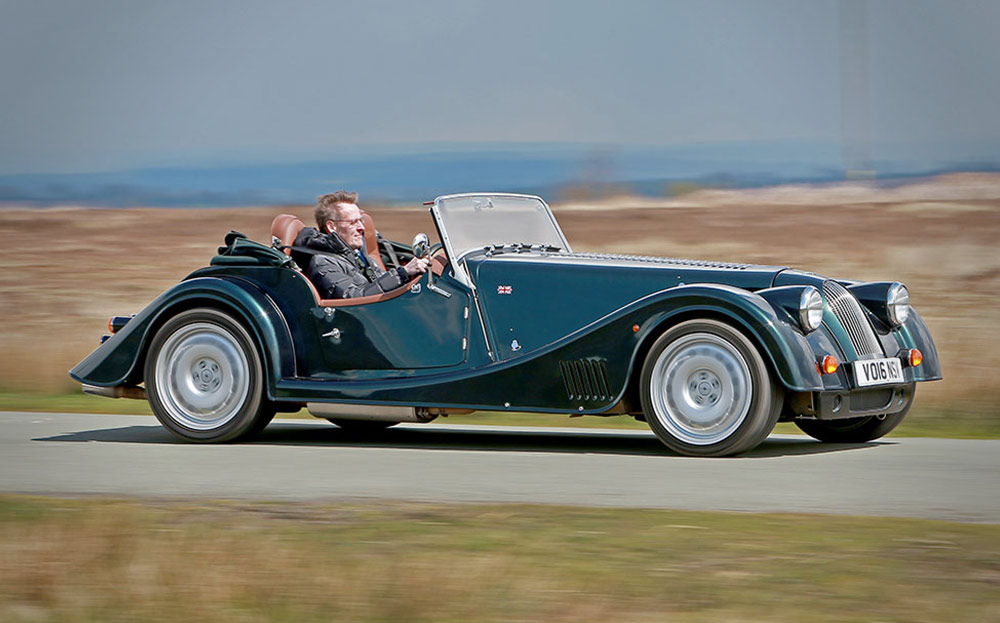 FOR MOST people, a car is a rational purchase. It’s all about reliability, practicality and economy, and if it looks appealing that’s just a bonus. But thankfully there are some people at the other end of the spectrum who don’t care about common sense – they want something completely bonkers that puts a smile on their face every time they open the garage door. Something like a Morgan Plus 8.

Marrying the British sports car maker’s bonded aluminium chassis with its classic bodyshell, the Plus 8 is (believe it or not) something of a “Q car“. It looks gentlemanly but underneath that long bonnet sits a 4.8-litre V8 powerplant that produces 367bhp, giving the Plus 8 far more punch than Morgan’s similar-looking four- and six-cylinder models. Like a growling Clint Eastwood in a Saville Row suit, this old timer is not to be messed with.

What’s more, by basing the Plus 8 on an alloy platform, rather than the steel frame used for its lower-powered sister models, Morgan has transformed its dynamics, especially with the fitment of uprated brakes and suspension. It’s unlikely to have the relative giants of the sports car world, such as Porsche or Maserati, quaking in their boots but the intent is clear: this is a focused performance car.

View the Morgans for sale on Driving.co.uk

The Plus 8’s platform is also 6in wider than the traditional steel chassis, which gives the car a stance and level of stability that its more affordable siblings can’t match. All of that extra width is in the cabin, but it’s still cramped for wider occupants; each running board is 14in wide. But unless you’re well over six feet tall and portly you shouldn’t struggle to get comfy, the seats offering plenty of support.

The rest of the cabin is largely the same as Morgan’s other four-wheeled models, which means that it appears to have been plucked from the 1950s, with its roll-top dash, chrome-rimmed instruments and cut-down doors with screw-on sidescreens.

Everything is swathed in leather, there are exposed screw heads everywhere and the door-mounted mirrors appear to have been swiped from a Ford Anglia. Peer through the narrow heated windscreen with its trio of tiny wipers and the view is pure pre-war, the view dominated by the exposed wings and V-shaped louvred bonnet. But in a nod to modernity twin airbags are optional, in case you struggle to tame the 367 wild horses.

Standard fare includes AP Racing brakes with anti-lock tech, the all-vented discs slowing the Morgan with uncomfortable ferocity. The all-round independent suspension (recalibrated for 2016) is also surprisingly adept, producing a ride that’s firm rather than spine-jarring despite the fitment of low-profile tyres.

But with so much power, a low weight (1,100kg “dry”, i.e. excluding oil and other fluids) and only the bare essentials when it comes to safety tech to keep everything in check, this is still a car that has to be treated with care.

For many owners much of the Plus 8’s appeal is in the fact that this is an analogue car in a digital age; it doesn’t mollycoddle you but it does play with your senses in a way that nothing else can. The amuse-bouche is the looks, backed up by the sound for an entrée while the driving experience is the main course. Once you’ve consumed all those there’s no need for a dessert.

“Its lack of sophistication would make the Morgan easy to write it off (in more ways than one) on a brief test drive. But give it just a little more time and it gets under your skin”

Fire up the BMW-sourced V8 and it barks before settling down to a disappointingly muted growl. At anything over tickover there’s a throaty burble just as you’d expect; to understand the potential under your right foot, you need just 1,000 revs on the dial.

Morgan builds just 100 or so Plus 8s each year, most buyers opting for a six-speed ZF automatic transmission with paddle shifts; the alternative is a BMW-built six-speed manual. The auto suits the V8’s pulling power, and while it doesn’t have the immediacy of a dual-clutch gearbox, the 370 lb ft of torque and low weight means it doesn’t matter if the transmission isn’t the sharpest around.

With the ZF auto installed the Plus 8 is as easy to pilot as a supermini, but if you want some fun you won’t feel short-changed by the speed at which the gearbox responds to your paddle shift inputs.

The hydraulic power steering gives just two turns between locks; beautifully direct, it’s heavier than you might expect at parking speeds, and as the velocity builds that heaviness stays there. But it’s never uncomfortably stiff, as there’s just the right amount of feel for press-on driving.

With the mercury peaking at 5 degrees during our loan, and rain or snow falling for most of the time, attacking the road at ten tenths wasn’t really advisable. Especially when at five tenths it’s possible to find the limits of adhesion without trying. While the Avon ZZ5 245/40 R18 tyres provide masses of grip, the V8 supplies even more torque, which is why the tyres are always going to fight a losing battle.

There’s no traction control or ESP, although there is a mechanical limited-slip differential. Bury the loud pedal and there’s a brief hesitation as the electronics catch up with your demand, the box shifts down a ratio or two and you’re catapulted forward. Or more likely, sideways.

It’s this lack of sophistication that would make the Morgan easy to write off (in more ways than one) on a brief test drive. But give it just a little more time and it gets under your skin. The noise, the acceleration and the driving experience are like nothing else out there – but you have to accept that for a significant amount of cash you’re buying a driving experience that’s not very polished.

It’s also not very practical as there’s no boot and very little space for luggage in the cabin – although a luggage rack is available for the tail panel, at £834. It’s one of a long list of options.

Whether or not the Plus 8 is worth the money is debatable. The Roadster is almost as quick with its 3.7-litre V6 engine, and it costs little more than half the Plus 8’s sticker price but it’s based on the standard steel chassis so it’s even more of a handful.

So while the Plus 8 may not make sense from a rational point of view, this is a car for those who know they’re living in an irrational world. Long may that continue.