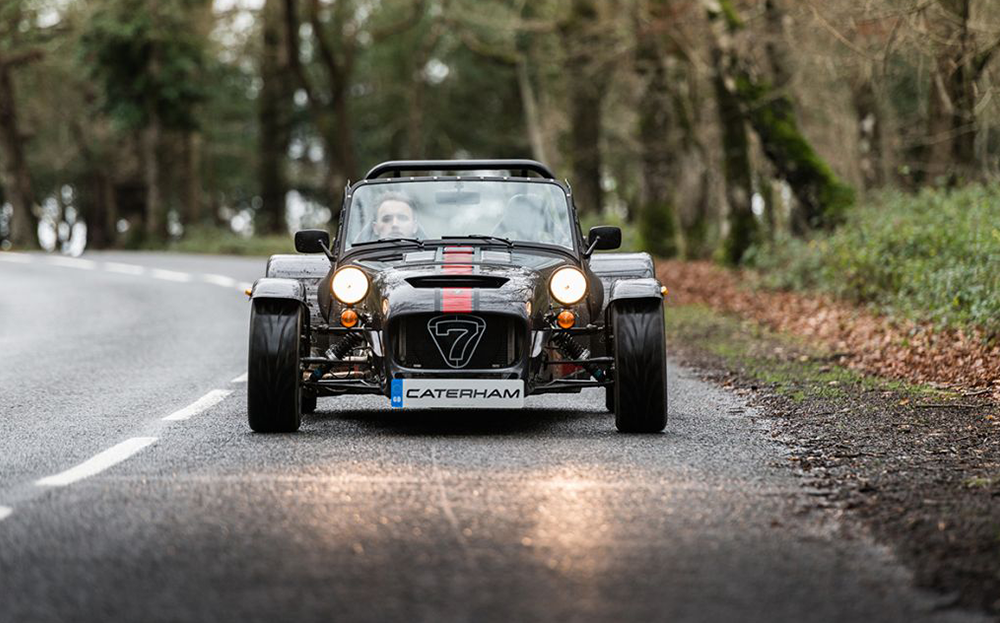 HOW WOULD you define “creature comforts”? It’s a matter of perspective, of course. If you’re Peter Stringfellow it may involve a leopard-print chaise longue and a multi-coloured drink topped with an umbrella. If you’re Sir Ranulph Fiennes, perhaps it’s a sharp knife.

The Seven was conceived by Colin Chapman – engineering genius and head of Lotus – in the 1950s as a lightweight sports car for club racing and its purity is definitely part of its success. Chapman’s famous mantra was “Simplify, then add lightness”. The Seven is arguably the greatest example of this. 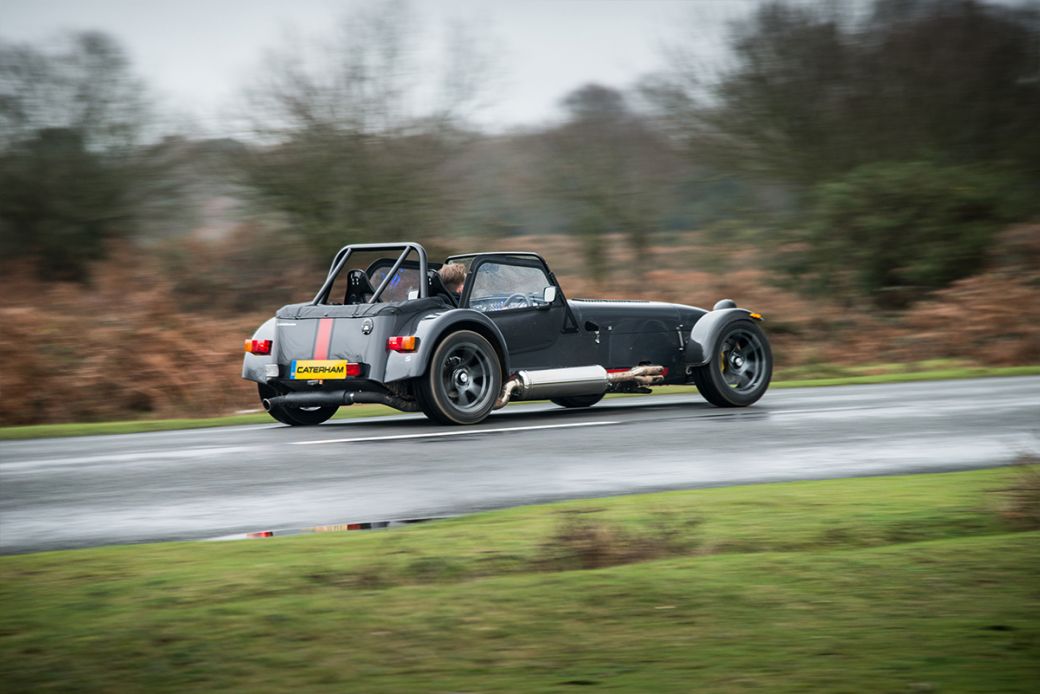 Diehard fans might argue that a lot has changed on the car since it was launched in 1957 but clearly progress is also a matter of perspective – the Sevens you can buy today from Caterham are essentially the same stripped-back experience they’ve always been.

Driving one puts you down low with your bum scraping the road, your sides squeezed tight by the narrow transmission tunnel that leads from the seat to the pedals. Forget fitting in one if you’ve allowed success in life to go to your middle.

Climbing in and out if you’re anywhere approaching tall is a matter of contorting your body into all manner of shapes you never thought possible, especially if the hood is up (more on this later), and those inexperienced in the art are likely to burn themselves on the exposed exhaust pipe that hugs the driver’s side.

The creature comforts come as part of the “S-pack” specification, which is standard on the 620S, in an effort to soften the edges of the most brutal Seven currently available – the 620R.

That car has the same 310bhp supercharged Ford Duratec engine but is honed for being flung around a racing track. On the 620R, a heater and windscreen are options. The other major differences are a six-speed sequential gearbox and 13” wheels on the R, versus a five-speed manual and 15” wheels on the S.

Essentially, though, the two cars come from the same stable, with stripped-back dashboards, racing seats and extensive use of carbon fibre, and the performance of both is savage (a review of the 620R is coming soon). 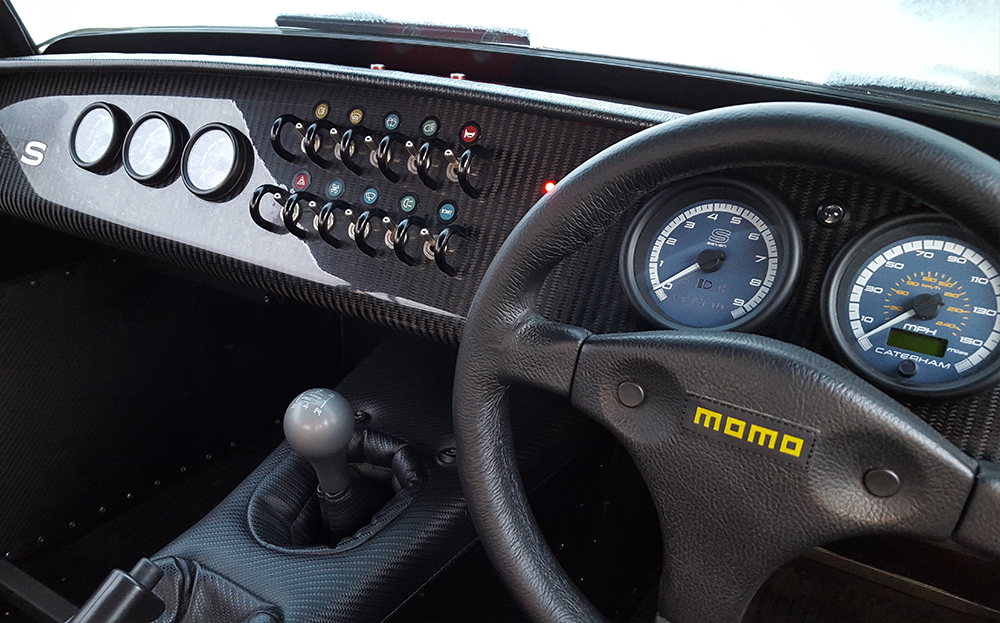 While the 620S is clearly a more usable vehicle on the road, it is far from what motoring journalists like to call a “refined” driving experience. Trying to turn the 620R into a daily driver is a bit like domesticating a tiger. You may bond. You may have countless unforgettable moments together. But all the time in the back of your mind there’s the sneaking suspicion that it may bite your head off.

Let me explain. In these days of BMW M, Mercedes-AMG and Audi RS cars, the 2-litre, 310bhp engine can only considered powerful when you take into account that the Caterham weighs about the same as a Ford Focus that’s been cut down the middle (610kg).

The power-to-weight ratio is 508bhp-per-tonne, which, for comparison, is similar to a Lamborghini Veneno. Thanks to the supercharger it also has oodles of torque (219 lb ft). This means it can shift like a scalded cat, reaching 60mph from standstill in just 3.4 seconds (it’s marginally slower with the extended and widened SV body of our test car).

What’s more, peak power and torque are only achieved once the four-cylinder engine is revving over 7,000rpm, which causes it to scream at you via its rasping exhaust as if you’re being chased by angry hornets.

And lighting up the 15” rear tyres is easy in at least two of the five gears available. There’s no traction control or electronic stability control, of course; as a joke, on Twitter I asked followers where on the dashboard I could find the traction control switch and naturally the wags retorted, “It’s the pedal on the right.” 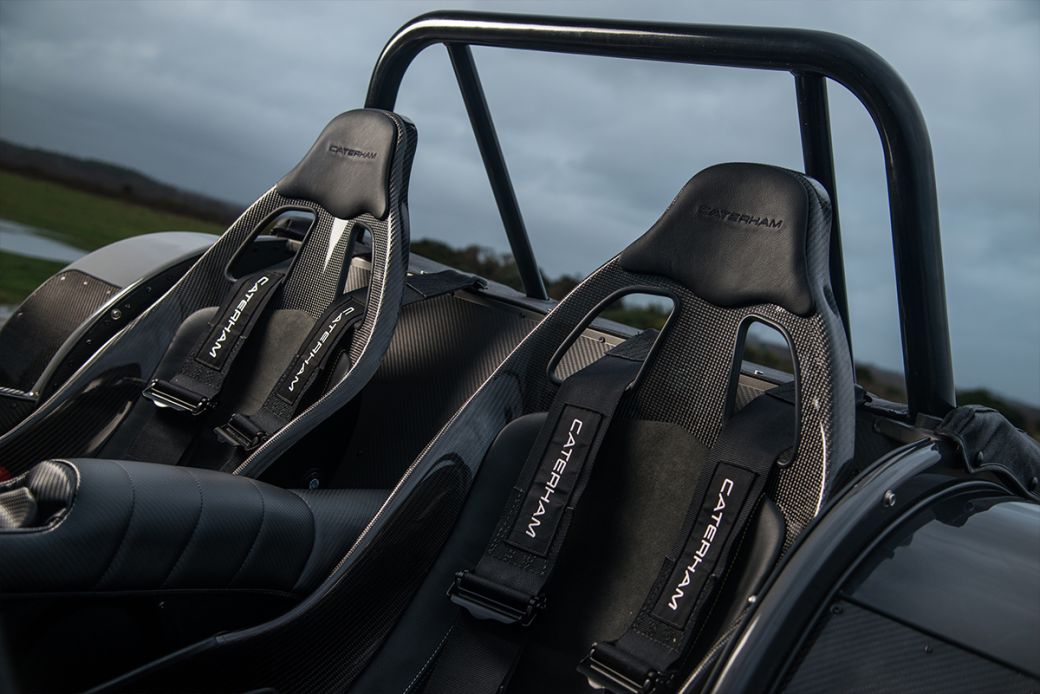 But despite this tail-happy bias, at no point did the 620S feel “tricky” or out of control. With the weight of the engine towards the front of the car it grips well at the front and can be pivoted through corners around the nose, while oversteer is easily and instantly controlled via the throttle.

Describing a car as handling like a go-kart is somewhat of a motoring journalist cliché, but if a road car comes close it’s the Caterham 620S. The Momo wheel is about the same size and design as you’d find on a kart, and the weight, feel and vibrations from the road are very similar.

Meanwhile, the unassisted steering is instant, with tiny movements of the wheel allowing sudden direction changes, especially at speed – there’s no fancy gearing to alter the steering feel at different speeds here. That means a big turning circle at a crawl and a lively front end at speed.

And the sensation of speed is stunning. The asphalt-scraping driving position, the screaming exhaust, roar from the tyres and battering from the wind are enough to wake the dead, should you be in the habit of transporting cadavers, that is.

As we approach a new motoring dawn in which the computers take over and cars drive themselves, it’s wonderful to know that true enthusiasts still have somewhere to go to

No enthusiast will be surprised by any of this, of course. They’ll simply realise that it’s the Seven magic, but more so.

Neither will they be surprised by the list of niggles experienced during our four-day test. The heated driver’s seat didn’t work on the first outing, for example, but the problem was found to be a loose connection in the wiring behind the seat – easily sorted (and the two-stage heating works well, when it works).

Also, at one point the fuel level decided to suddenly drop from half a tank to zero; after a few miles it was clear that it was a fault with the gauge rather than a leak in the tank, and was magically fixed the following morning.

Other issues: the heater only worked when the engine was sufficiently warm, and 70mph cruising dropped the engine temperature from over 80 degrees to an indicated 20 degrees – at least, that’s what the gauge displayed. This made it decidedly chilly in the cabin on the motorway, exactly when you need it most. Drive around in stop-start traffic, and you’ll be toasty warm. 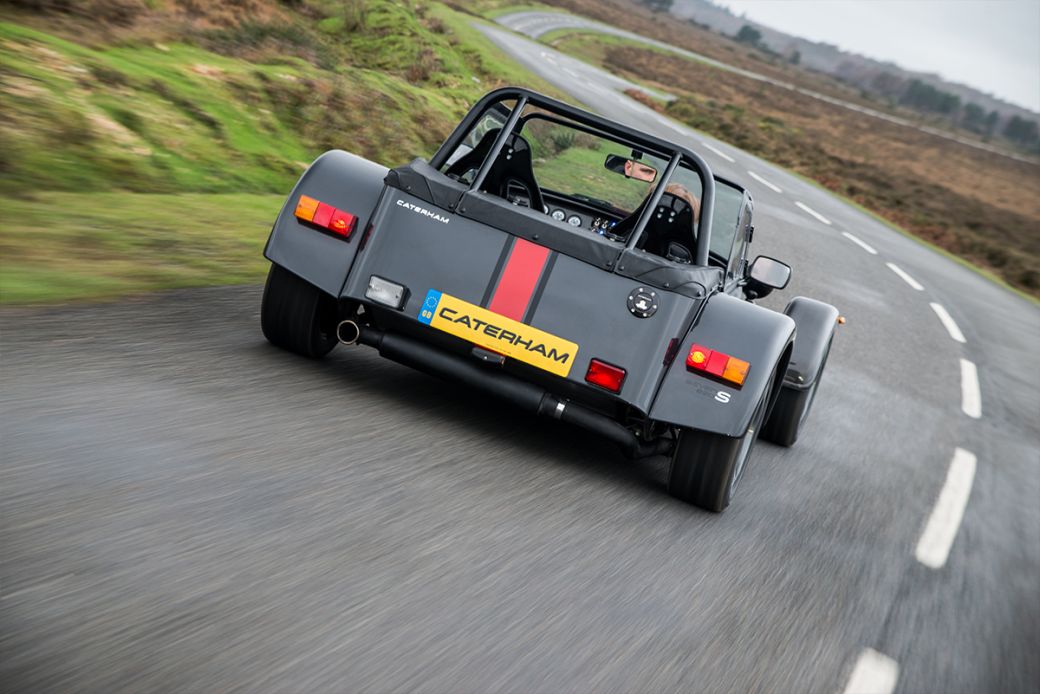 In traffic you’ll also be gassed by exhaust fumes, both from other vehicles (their exhaust pipes are at head level) and your own 620S, with the fumes rising from the pipe outlet just behind you. It’s worse with the hood up and doors closed.

Finally, you’ll need to allow five minutes on your journey to climb in, do up the four-point harness and set off – 15 if you need to fit or remove the hood.

But such things matter not a jot to the Caterham buyer. These things are part of the character of the car, which is really only about one thing: the sensation from behind the wheel. As we approach a new motoring dawn in which the computers take over and cars drive themselves, it’s heartening to know that true enthusiasts still have somewhere to go to get their kicks.

And boy does the 620S deliver on that front – power, control and importantly fun are available in spades. Just don’t expect it to be a comfortable daily driver.

* As a low volume manufacturer, Caterham is not required to put its vehicles through the official NEDC economy and emissions tests