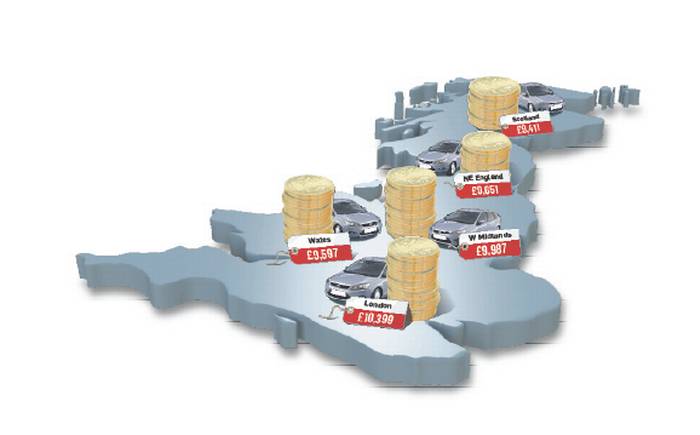 EVERYONE KNOWS that the cost of your house depends on where it is. “Location, location, location” has been the mantra of property hunters for generations. Now the same appears to be true when it comes to buying a second-hand car.

Now imagine you were in the market for an average second-hand car — a three-year-old silver Ford Focus diesel with between 20,000 and 30,000 miles on the clock.

Awareness of regional variations in used-car prices has been circulating for years among car dealers and private sellers. But new research has revealed the scale of the differences. According to CAP, the used-car price guide, which has analysed 1.2m car prices online — advertised by dealers and private sellers — the variation can be so marked that car dealers are buying stock in one area and then moving it to another to make an instant profit.

“There is a lot of geographical discussion going on at the moment between dealer groups because the margins are tight,” said Philip Nothard, retail and consumer specialist at CAP. “The idea is to identify which cars attract a premium in which areas, and then move stock around the country accordingly.”

Prices also fluctuate depending on what type of car is being sold. For example, although London is the most expensive place for a Ford Focus, if you are buying a supermini such as the Mini Cooper, Newcastle upon Tyne is where prices are highest. A three-year-old model costs an average of £12,490 there; the same car would cost £10,995 in London. The Honda CR-V 4×4 attracts the biggest premium in the southeast, where it costs £19,942, and is cheapest in London, where it averages £15,995.

Tim Naylor, of British Car Auctions, says the auction business has traded on the variations for decades. Cheaper areas are known in the trade as “honeypot locations” because of the plentiful supply of bargain cars. “Car dealers and traders will travel to get the cars they need or bid via the internet, rather than just relying on what is available in their own locality,” he says. “A car bought in Nottingham, for example, may as easily end up on a dealer’s forecourt in Glasgow or Guildford as just down the road in Leicester.”

It is not just used-car dealers that see price fluctuations. Private sellers also advertise different prices depending on where they are in the country. Adzuna, a search engine, recently scrutinised classified adverts posted online. By analysing data on 600,000 used cars in 100 locations, it has revealed a used-car price map of Britain. The prices it has examined are from private sellers and give a startling view of the used-car landscape.

the cheapest place for used cars in the country at the moment is Nottingham, where the average price is £5,180 — 34% below the average used-car price for Britain, currently £7,847.

The most expensive place in the country is Cambridge. The average price in the university city is £15,533 — 98% higher than the national average used-car price. Next are Winchester at £15,297 and Chichester at £13,334. (See below for a fuller list)

Andrew Hunter, co-founder of Adzuna, says buyers can take advantage of these variations in price if they are prepared to travel. “Used-car buyers should be willing to travel to find a bargain,” he says. “It’s clear from the data that there is a supply and demand imbalance around the country. A 2009 Ford Mondeo might be £500 cheaper in Cardiff than in London — not because of the condition of the vehicle but simply because there aren’t enough buyers in the market, forcing sellers to reduce the price. While used-car marketplaces such as the southeast remain buoyant, bargain hotspots are emerging around the country where there simply isn’t enough demand.”

Other economic and geographical factors play a part too. Transport links are especially important. “Take East Anglia, where road communications aren’t brilliant, and people tend not to travel out of the area as much,” says Matt Tumbridge, editor of UsedCarExpert.co.uk, a consumer advice website. “It creates a closed market and sometimes helps keep prices high.”

People in London often prefer not to venture outside the M25 when looking for a car. That means that in the home counties, still a wealthy area, prices can be significantly lower. “If those living in London want a bargain, they haven’t actually got far to go,” says Tumbridge.

There are limits to how far it is worth travelling to bag a bargain. Many dealers may offer warranties that require the work to be done at their garage and buyers won’t want to travel hundreds of miles for a service. A dealer told The Sunday Times that customers were willing to pay on average an extra £250 for a popular model for the benefit of not travelling far, and £500 on a premium model.

One thing is clear: the rise of websites with a large, national readership (including The Sunday Times’s Driving website) makes it easier to take advantage of these price discrepancies. No longer does finding your next car mean sitting down with the local paper on a Friday night and combing the classifieds for whatever is in a 30-mile radius. With a laptop or a smartphone it’s possible to extend the search area and find a much greater choice. So could used-car tourism be the next big thing? One recent local news headline, “Come to the southwest — it’s the cheapest place to buy a used car”, suggests as much.

Where to find the used car honeypots

The price of a used car can vary according to its type sand location. For example, London is the most expensive place to buy a Ford Focus but it is the cheapest place to buy a Honda CR-V.

N.B. Figures below from CAP. Based on the average advertised price in the past three months of three-year-old vehicles with 20,000-30,000 miles on the clock.

Ray Tucker realised that he could probably save money if he shopped around for a replacement Mercedes estate. His search of local classified ads and dealer forecourts in north Suffolk had turned up the car he was looking for, but when he went online he discovered a similar vehicle at another Mercedes dealership for £3,000 less. It may have been 220 miles away in North Yorkshire, but, according to Tucker, the savings far outweighed the hassle.

“I went onto a website and selected a nationwide search,” says the 56-year-old oil rig manager. “In this part of the world, East Anglia, and London, car prices are generally higher than the rest of the country, but even so I was surprised how much cheaper this car was.

“It’s a very high-spec model, which I was looking for. It’s got the sat nav, DVD player, good stereo system, radar cruise control and lane departure warning. At a local garage in Norwich, a similar model without as many extras was £28,000. For the price of a £35 train ticket to Skipton, a five-hour drive back and half a tank of diesel, I’m getting a better car.”

Tucker expects to collect the vehicle this week and blames a lack of competition and a shortage of cars in his area for the large price discrepancy.

“On the internet I can compare prices anywhere in Britain,” he says. “I’ve seen pictures of the new car, and got the garage to send more photographs of various particular areas of the car that I wanted to look at.

“If I wanted to, I could get my E-class delivered to the door for £200, but I’d like to see it in the flesh before I buy it. I don’t mind not knowing the dealer: the car’s got a one-year warranty and I’m buying it from Mercedes, not any old Joe.”