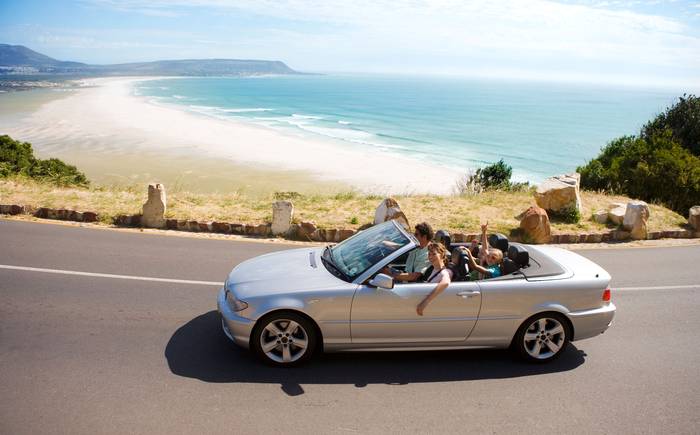 Many go in trepidation: one in five only have a hazy idea of the rules of the road in their foreign destinations, while one in six are nervous at the thought of driving on the right, according to the RAC.

But it doesn’t need to be hard. Take our simple advice and cover the basics (like learning the word for ‘diesel’ and checking the speed limits) and your holiday should flow as smoothly as the traffic on French autoroutes. And if that’s not incentive enough, then remember that most European police can issue on-the-spot fines if you get it wrong.

Search for and buy your next used car at driving.co.uk

European countries are unable to officially obtain details of British drivers from a registration number. This means that being caught by a speed camera will not automatically result in a fine.

This doesn’t mean that British drivers can speed across the continent without any regard to the rules, though.

For a start, radar gun-toting police are generally more common than in Britain and fines can be hefty. In Switzerland, for example, financial penalties for speeding are calculated on a driver’s income and, in theory, can stretch to hundreds of thousands of pounds. Foreign police forces may also try to trace your address through private companies in order to issue a fine for an offence spotted by a speed camera.

Transport your car by train

Nothing rivals the car when it comes to packing in everything that you need on holiday and getting around once you are there. It’s the interminable drive to your destination that really grates. Fortunately, there is an answer. Trains from France, Holland and Germany will whisk your car to northern Spain, Italy, southern France and beyond.

You simply book your place, drive to the station at the allotted time, and leave the hard work to the train driver.

Trains generally run at night and you cannot remain with your vehicle. Services in Germany and Holland have cabins next to the carriages which carry your cars, allowing you to sleep on the same train. In France, you need to make your own travelling arrangements

This is easy to forget as you leave for holiday after frantically scouring the house for your youngest child’s favourite teddy bear and checking whether everyone’s taken their car sickness medication. If you’re driving on the other side of the road, then you need to make sure that you convert your headlights to avoid dazzling drivers on the opposite side.

If you’re lucky, then your car will do it for you: many modern vehicles have an option, buried deep in their menu systems, to adapt the beam for right hand drive. All the driver needs to do is select the option on the dashboard. If the feature isn’t on your car, then the simplest solution is to buy stickers from Halfords.com that attach to the front of your headlight and block out the parts of the beam that can dazzle oncoming traffic.

All of these are compulsory in France, so if you are driving abroad, then the chances are you will need them all. Failure to comply can result in a €135 fine. The reflective jacket must be in the car – if you do break down, the police want you to put it on straight away – not fumble for it in the boot in your dark clothes. The GB sticker is only needed within the EU if you do not have a GB label on your number plate. Outside the EU, it is advisable for every car to use a GB sticker.

Driving on the right

This terrifies drivers so much that there are even courses to help you prepare. In practice, though, there is little need. For most of the time, driving on the other side of the road is intuitive: you quickly work out that something is wrong if all of the road signs and markings are not facing you.

The biggest issue often comes at t-junctions or roundabouts where it’s easy to glance ion the wrong direction and pull out, potentially triggering a crash in a split second. Devices like Lanesafe may help to avoid this, as they continuously indicate the correct side of the road to drive on.

Thanks to EU membership, British drivers are covered when driving abroad in member countries but, like many other European initiatives, it works better in theory than practice. Some drivers have found themselves accused of not having any insurance at all if they are involved in a collision and, in any case, the automatic European cover is only for third party damage, which is not much use if your car is written off in the depths of the Dordogne. Full European cover, which may cost more on top of your additional policy, is highly recommended, as is breakdown cover.

Also take your insurance certificate, registration document and both parts of your driving licence as police may demand these.

Don’t run out: large distances between some towns on the continent can mean that you can’t necessarily rely on a petrol station to be nearby. It’s also an offence to run out of fuel on the autobahn in Germany, which can result in a fine, which is generally under €100. E85 is also more common on the continent, which is a blend of unleaded fuel containing 85% ethanol.

Be careful not to mix this up with standard unleaded – your engine really won’t like it. Also be wary of E10, containing 10% ethanol: many cars, especially older ones, are unable to use this.

Any trip to the continent is likely to involve miles of driving on French autoroutes and intermittent stops to pay for their tolls. Unless you fit an electronic tag, that is. The small beige box, which is roughly the same size as a credit card, sticks behind your rear view mirror (or you can just hold it up to the windscreen when you pass through the toll booths, called péages). It communicates with sensors at the péages to record your journey when you briefly stop at the barriers. You will receive a bill for every month you use the network and the charges will automatically be debited from your bank account.

Unfortunately it does not offer a discount on the toll and costs up to €16 (£13.50), but you may judge the cost worth it for two reasons. The first is that you can use the télépéage lanes, marked with an orange ‘t’, which are often less busy. The second is that you may find yourself at one of the non-stop télépéage lanes, which allow you to drive through slowly, lifting the barriers automatically without any need to stop at all.

Click here for more information and to buy a tag

Germany’s motorways have a reputation for being free of all speed limits – but that’s not strictly true. There are limits in place on around three quarters of the 8,000 mile network and increasing numbers of gantries that can show temporary speed limits – just like in Britain. Police are known to enforce limits rigidly.

But even so, there are still large stretches of unlimited autobahn, signalled by white signs with narrow black diagonal lines across them. There is an advisory speed limit of 130 km/h, but is not legally binding.

Read up on the latest travel information on the countries that you are travelling to, including Foreign Office safety updates and AA driving advice, using a new Foreign office website. This will provide information on speed limits, compulsory equipment and unusual laws.

Search for and buy your next used car at driving.co.uk