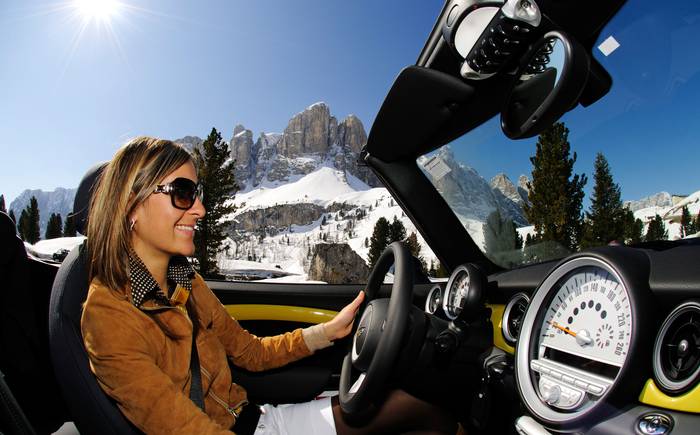 WITH THE thermometer struggling to rise much above freezing and a biting easterly wind making sure it stays that way, it may seem an odd time to be buying a convertible. But that’s exactly what more than 500 buyers were intent on doing one freezing day earlier this month (March) when they gathered in person and online to bid for 250 soft-tops at an auction in Surrey.

As the successful buyers drove away from the auction, dodging roads clogged by drifting snow, the question is why hundreds of people were so keen to buy a drop-top in such inclement weather.

“The best time to buy a convertible is in March because between now and September they hardly depreciate in value,” says Mark Norman of CAP, the trade price guide. “What you pay today, when demand picks up, you should just about get back in September while demand is still strong and before thoughts turn to winter.”

But few people sell their cars after six months, so Norman advises people sell their convertible after 18 or 30 months and use the seasonal bounce in prices to minimise the pain of depreciation. Of course, much of Norman’s argument hinges on paying as little as possible for the car in March. Ideally, you would buy it at an auction or privately, if you’re feeling brave enough.

The choice ranges from sportscar convertibles such as the Mazda MX-5, through executive cabriolets like the Audi A5 to luxury soft-tops, which include the Bentley Continental GTC. Then there’s the option of folding metal roofs or conventional fabric roofs. The latter appear to be making a comeback.

“I detect a return to traditional fabric-roofed convertibles with cars such as the Vauxhall Cascada,” says Norman. “The metal-roofed models can require oversize rear-ends for the roof to stow in which can look ugly, where fabric roofs can fold into a much smaller space that doesn’t spoil the look of the car.”

And all the while, convertibles (or cabriolets ‒ they mean the same thing) have been getting easier to live with. Two years ago Benita Mayhead, 45, an HR consultant, bought a new Mercedes E-class while her husband Anthony (42) a company director, picked up an Audi A5 cabriolet. They regard the E-class as a workhorse and the cabriolet as a fun car.

“The Audi is fun all year round,” she says. “Its fabric hood is very well insulated so in winter the car stays warm and there’s no buffeting from the wind. If we’re on the motorway with the roof down and it starts to rain, we simply leave at the next exit and drive slowly around the roundabout and raise the roof.”

Driving a white cabriolet with its roof down can attract unwanted attention, though. Especially from truck drivers. “They honk their horns and shout terms of endearment,” says Mayhead. “At first I thought they were trying to tell me I’d left my lights on.”

And there is one other big problem with the Audi, one that the couple’s two children are only too aware of.

“They call it the ‘windy car’. Unless it’s a warm day, it can be very cold and windy in the back when the roof is down. It’s really only for two people.”

But don’t let that put you off. Surely the cooler months, with the promise of warm and sunny weather to come, really are the best time to get that convertible before the rush. Here’s our round-up of covetable convertibles.

With four generations to choose from (since 2015), there’s an MX-5 for all budgets. The Mk1 is to some eyes the original and best but later versions brought additional refinements culminating in the metal-folding roof of today’s coupé roadster. It’s a sports car at heart so expect (and experience) super-sharp handling, a cramped interior ‒ and bags of fun.

Take one of the most stylish runabouts you can buy, slice off the roof and the cutest car on the planet just got cuter. There’s next to no room in the back but as explained above, convertible motoring is best enjoyed two-up. There’s a riot of special, and not so special, editions so be sure you’re not paying a premium for things you don’t want.

There’s been a soft-top Golf since 1980 and well regarded they are, too, except by Jeremy Clarkson who said of the latest version, “It’s like a leather-soled training shoe. The worst of both worlds.”

It’s a matter of opinion, of course, but whichever version of Golf cabriolet you buy, you’ll find it classy and tough. However, we doubt Clarkson can be persuaded. Instead, he recommends you buy the “Golf convertible that isn’t actually called a Golf”. It follows below.

>With all the clamour in the past year or so surrounding Volkswagen’s new Golf, Polo and Up! models, the elegant, practical (it has a folding metal roof) and beautifully built Eos two-plus-two has been rather overlooked. Clarkson damns it with faint praise, describing it as a “simple, clean blend of well-made anonymity.” If that means truck drivers don’t honk their horns at you, we’ll settle for that.

Unless you’re spending more than £50,000, few convertibles are as classy as the Audi A5. It has all the virtues we’ve come to expect of the brand, namely understated looks and excellent build quality, and with the roof up it’s clearly an all-year, all-weather proposition. But roof down, rear seat occupants might need to wrap up and there’s a touch more body shake than you’d expect of such an otherwise well-made car.

To the usual German virtues of good build quality and handsome styling, the BMW 3-series brings real driving pleasure; a directness of steering and unflappable handling that on the right road, and with the roof down, is truly delightful. All convertibles suffer body shake to some degree but the BMW manages to suppress it well with extra stiffening to an already robust frame. The diesel versions are powerful and notably economical but we’ve chosen the 325i petrol for its refinement, performance, economy – and uplifting exhaust note.

Now Saab is no longer, there’s a whiff of the future classic about this car. The convertibles have always attracted a loyal following; some people see them as the thinking driver’s alternative to the ranks of German soft-tops. Quality is almost on a par, and in certain respects, better. Buy as new as you can, look after it and its depreciation curve over time ought to be shallow rather than steep.

Why spend out on a 911 when you can have its smaller, better-value sibling complete with wind-in-the-hair thrills? Since it was designed to be roofless it’s inherently stiff enough to avoid the body shake many chopped-roof convertibles suffer.  Specification has an enormous effect on prices. There are few cars available in standard trim.

It might not be quite as much fun to drive but the TT is a more affordable alternative to the Porsche Boxster.  It’s been on sale for 15 years now, so there are plenty to suit all budgets. The first generation cars still look fresh but the current model is slightly roomier, looks sharper and features aluminium bodywork to improve weight distribution. There’s a Quattro version but the front-drive models are perfectly entertaining.

Trust Mercedes to set its engineers the task of curing air turbulence in a convertible. They came up with the Aircap, a system of wind deflectors front and rear which keep the cabin relatively draught-free and, just as importantly, warm, too. Meanwhile, the car is a fine-riding conveyance and solidly built. The 3-litre diesel is our pick for power, economy and refinement.

The convertible concept was created for cars like the Bentley Continental. Wafting with style is what convertibles do best and few cars waft as well as the big Bentley, footballers’ wives notwithstanding. The W12 is a bit juicy (the later 4-litre V8 would be our choice were it available at our chosen price level) but then again, you’re buying used, so already enjoying the economies of so doing.