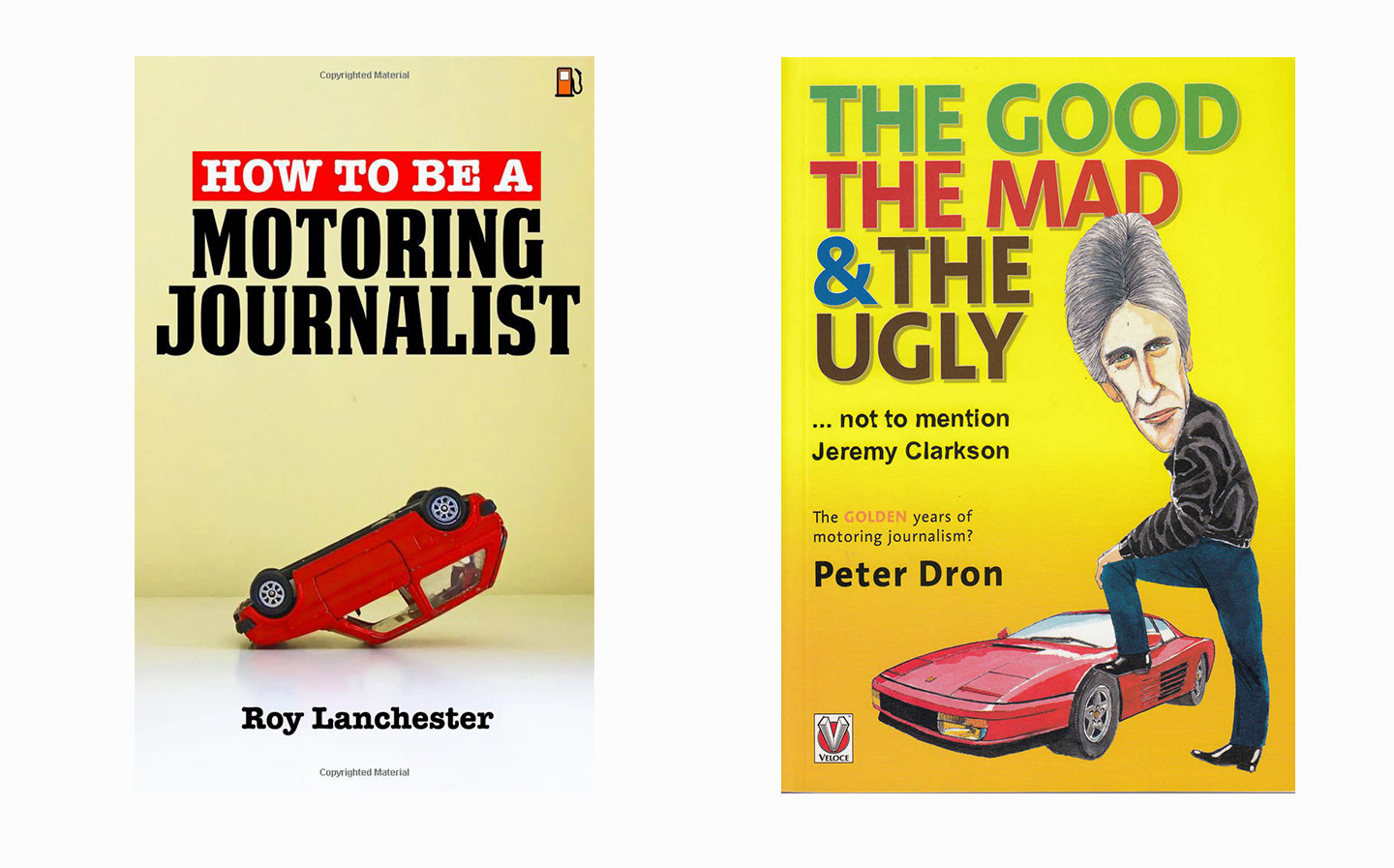 IF YOU’RE wondering how to get your foot on the motoring journalism ladder, you could learn a lot from two new books written by seasoned automotive authors. Then again, you might learn very little, but they’d at least be excellent additions to a downstairs lavatory.

How To Be A Motoring Journalist by Roy Lanchester is described as a “no-holds-barred autobiography that tells the story of one of the world’s most well-plastered car writers, how he got to where he is today, and why he refuses to accept blame for the damage to the curtains.”

Lanchester has written for exalted titles such as The Harrogate Post, The Examiner, burlyman.com and Home Sauna. Well, so it says on the back cover of the book … it should be noted that he’s also a contributor to parody site sniffpetrol.com.

The author says his new book “isn’t just a memoir from one of the industry’s most prolific buffet enthusiasts” but “also acts as a guide for anyone hoping to become a car journalist.”

Also recently launched is Peter Dron’s The Good, The Mad & The Ugly … Not to mention Jeremy Clarkson: The GOLDEN Years of Motoring Journalism?

Dron, a former writer and tester for Motor magazine, then Editor of Fast Lane and later a freelance journalist with a weekly column in The Daily Telegraph, takes what his publisher describes as a light-hearted look at what it was like to be a motoring hack in the last two decades of the 20th Century.

He has “many tales to tell” about industry moguls, racing and rally drivers, and motoring journalists. Jeremy Clarkson has a whole chapter devoted to him, for example, although really it’s about why a more detailed chapter concerning the world’s most famous motoring journalist was not included in the final book.

As advertised on the back cover, although Dron’s book is “essentially about cars and car people, the author ambitiously hopes that it may amuse, irritate or even inform those who are not interested in cars at all.”

It continues: “If readers are not amused, irritated or informed, the author does not mind in the least, provided they have bought the book with their own money, rather than stolen it or acquired it by other means, fair or foul.”

Both Lanchester and Dron have kindly allowed us to publish a couple of extracts from their respective books below, as a taste of what to expect.

Full disclosure: one of the authors happens to be the uncle of this website’s acting editor, and one of them happens to be fictitious. We’ll let you work out which is which.

“Of course, back in this jet-setting age, not all travel was by aeroplane. Sometimes, we might drive to continental Europe having crossed the English Channel by hovercraft, which might sound very glamourous but was, in fact, extremely noisy and with a terrible drinks service on board.

“Plus, one had to bear in mind that there was driving to be done upon arrival and the hovercraft company did not look kindly upon someone attempting to disembark a Talbot Tagora after four large glasses of Cabernet, as I discovered to my cost (although, actually, the cost was eventually covered by Peugeot Talbot UK, as was to be expected in those days, and I believe they kept the damaged ramp/cargo doors as souvenirs!).”

“I met Clarkson once, many years ago on a car launch when he was a fledgling presenter on the first iteration of Top Gear and I was very much at the top of the game in the regional newspaper motoring review business, with over two award nominations and almost no pending legal actions.

“‘I’ve seen your efforts on the telly, Clarkson,’ I began, clapping him warmly on where his arm would have been if he hadn’t moved it at that precise second, causing me to slap him awkwardly on the rib cage.

“‘I must say it’s nice to see a fellow Yorkshireman ont box,’ I continued. ‘Even if tha dunt sound lak it and is talking reet posh and that.” I was hamming up the accent by now, in case you hadn’t noticed.

“’Course, appen the difference between me and thee is that I still live in Yorkshire,” I concluded with a wry smile.

“’Exactly,’ quipped the man himself. ‘And that’s one of the reasons I left.’

“With that, he walked off to look at a wall chart about gearbox input shafts. I’ve always remembered that encounter and I’m sure Clarkson will recall a fellow Yorkshireman on the VW Vento event in 1992 and, indeed, the events that led up to my sudden removal from the venue. I imagine it probably put him off Crème de Menthe for a while!”

How To Be A Motoring Journalist is available exclusively from Amazon, as a paperback or an ebook.

“Jeremy Clarkson and I go back a long way. Some time in the mid-1990s, I was walking through a Motor Show hall on Press Day. On a stand that I was passing, a film crew was setting up its equipment. And there was Jeremy. He pointed at me and bellowed to his crew, ‘Hey, look! There goes the grand old man of British motoring journalism.’

“I already had grey hair, but I thought that was a bit cheeky. Of course, he was still developing his persona in those days. I bellowed back, ‘Well, it’s probably better than being the Simon Dee of the 1990s.’ Jeremy looked mildly vexed, but his crew fell about laughing.”

In the margins, Dron explains: “Cyril Nicholas Henty-Dodd, stage-name Simon Dee (1935-2009), was, for a short period in the 1960s, the highest-paid presenter on British television. He later appeared periodically on ‘Where are they now?’ programmes, and where he was then was mostly living rough.”

Peter Dron on attending a party, which two policemen had gatecrashed, with F1 driver James Hunt

“One of the coppers was at the poolside with James and me. He started recounting his thrilling career chasing speeding motorists. Only one, it seemed, had got away. This had occurred a couple of years earlier, when he was stationed in Surrey, on the other side of London.

“’We were parked on the bypass around midnight and this white Mustang came past, doing well over the ton, heading towards Sutton. So we gave pursuit in the Rover, with the blue light flashing and the siren going. The target turned left towards Epsom …’

“’After a couple of hundred yards there’s a right-hander. The bloke in the Mustang took it flat, didn’t lift. So I followed in the SD1 …’ The officer paused, his eyes glazing over at the memory.

“’What happened then?’ asked James, with a twinkle in his eyes.

“’We went off the road, through a hedge and finished up in a field.’

“Before this tale could be pursued further, there was a sudden movement and the police officer was pushed into the swimming pool. He disappeared beneath the surface. His peaked hat floated, upside down, then took in water and sank. The policeman reappeared, looking rather cross.

“It turned out that the other policeman had been chatting to James’ girlfriend of the evening and had dared her to push his colleague into the pool.

“The drenched policeman, having emerged from the pool, picked up James’ girlfriend and threw her, fully dressed, into the pool. There then followed a swimming session, both cops having stripped down to their Y-fronts.

“The host kindly provided some towels. One policeman had a dry uniform to get back into. The other, of course, did not.

“How all that panned out back at Dock Green, we never discovered. The cop with the wet uniform had some explaining to do, but he was more worried about a soggy incident book, from which it would be difficult, perhaps impossible, to extract the details of various motorists that they had nicked earlier in their shift.

“As the two guardians of The Law were heading back towards their patrol car and their version of normal life, James said quietly, ‘I wish I hadn’t sold that Mustang.’”

Peter Dron’s The Good, The Mad & The Ugly … Not to mention Jeremy Clarkson: The GOLDEN Years of Motoring Journalism? Is available directly from the publisher, Veloce, or via Amazon.co.uk, as a paperback or an ebook.