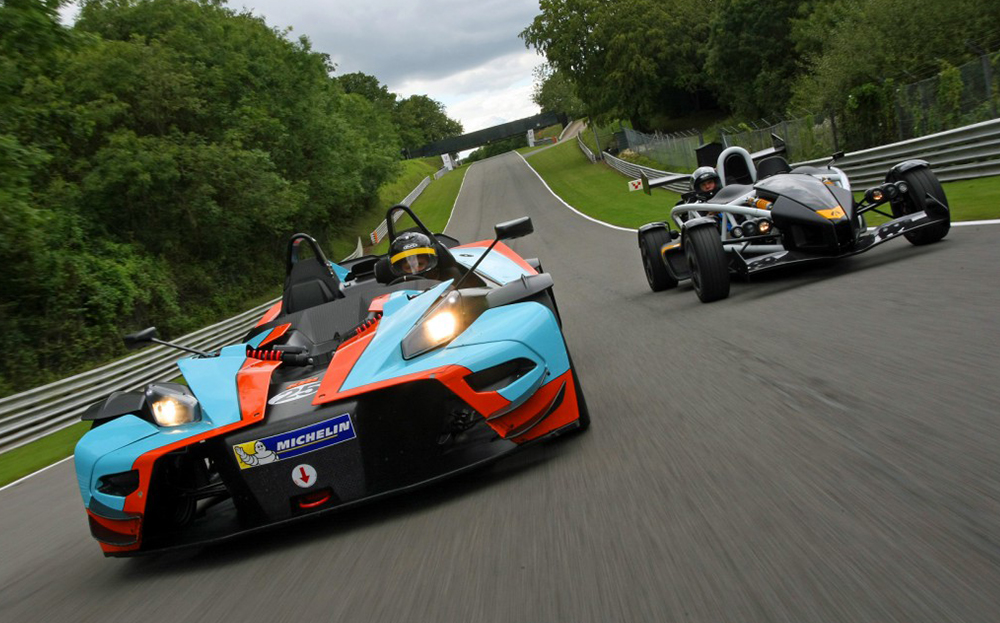 COLIN CHAPMAN, the maverick genius behind Lotus sports cars, had a straightforward philosophy when it came to making his machines go faster: “Simplify,” he said. “Then add lightness.”

Forget Ferraris and Lamborghinis loaded down with hi-tech driver aids, huge ceramic brakes and enormous engines. If you really want to experience the visceral thrill of acceleration, you need to look elsewhere: at the minnows, not the monsters.

It’s why we are here at Brands Hatch in Kent with four of the smallest, lightest cars you can buy lined up on the track for the inaugural Sunday Times Speed Trials — a test of how fast the quickest road-legal vehicles can hit the benchmark 60mph. The cars don’t look especially intimidating — they’re small, stripped-down and with not a single superfluous design tic or vanity spoiler in sight.

They are a disparate bunch. There’s the Ariel Atom 3.5R, built in Somerset and looking as though it was inspired by Richard Rogers’s “inside out” Lloyd’s building: suspension springs visible over the wheels, protruding engine and a simple space-frame exoskeleton. Then comes the Caterham Seven 620 R — essentially a long bonnet housing the engine with a couple of seats tacked onto the back above the rear wheels. 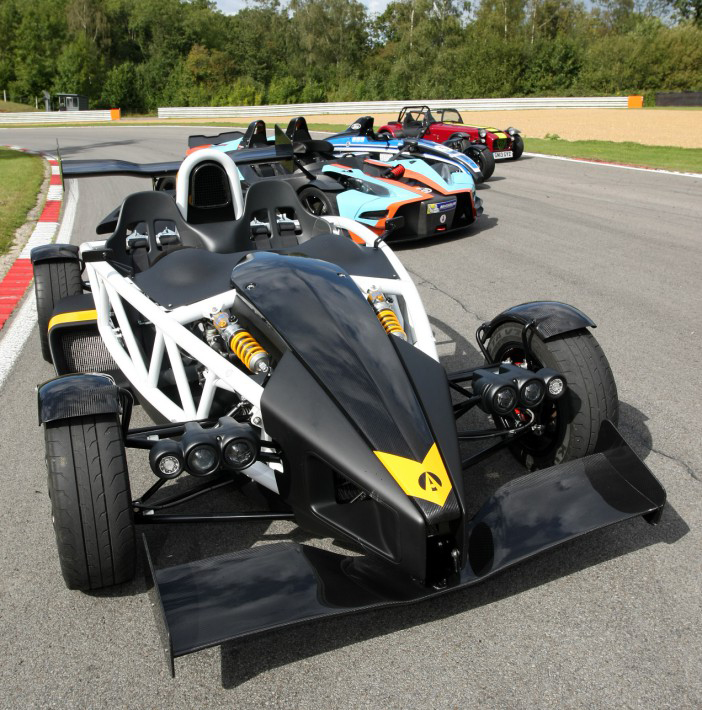 Next to them is the KTM X-Bow RR, an Austrian-built road racer that is so disdainful of fripperies that it doesn’t have a windscreen. There are no windows or doors either. You clamber over the sills to slide into the squidgy race seats. Finally there is the odd one out, a Formula Ford EcoBoost. While the other three are road-legal cars that mimic racers, the Formula Ford is a race car converted for the road. Portly drivers need not apply: getting in would make a potholer feel claustrophobic and even stick-thin racing drivers must remove the steering wheel to fit.

What all the cars have in common is that on paper they don’t pack much firepower — there is not a V6, let alone a V8, in sight. The Ford, for example, makes do with a tiny 1-litre powerplant.

This should make them faster off the line than — to use a technical term coined by Jeremy Clarkson — a “scalded cock”. But which is the quickest to 60mph?

We opt to drive the Caterham Seven first, a car that debuted — albeit as a Lotus — in 1957 and allowed David Niven lookalikes to breeze past Ford Anglias, sometimes with a picnic basket strapped to a boot rack. Today Caterham claims the 620 R can accelerate from 0-60mph in a slightly disturbing 2.79 seconds; a Bugatti Veyron Super Sport is only a shade faster.

It’s the only contender among the four to position the engine ahead of the driver. You sit almost over the back wheels, the retro headlights mere specks in the distance. It gives the Caterham bobsleigh proportions, and its 310bhp supercharged Ford engine ensures a similarly downhill-on-ice turn of speed.

Dip the clutch and hold the revs at about 4500rpm and the car buzzes, the resonance tickling your back, feet and palms. Release the clutch and the Seven crabs sideways in a pall of smoke.

The Caterham’s gearlever controls a race-car-style sequential transmission; pull the gearstick and power surges through the rear axle. There’s a little snatch of extra wheelspin when you grab second gear, before the car blitzes the straight. It feels indecently rapid, but after several runs our best time is 4.08 seconds.

Ford uses its Formula Ford EcoBoost to demonstrate that its three-cylinder EcoBoost engine — here with 202bhp, but usually found in less thrusty Fiestas and Focuses — is both fast and frugal. You can’t slip the clutch; you have to rev the engine hard, then let the heavy clutch spring-fire your foot into orbit.

The throttle is similarly hair-trigger: the boundary between smoking the rear tyres and floundering with too few revs is wafer thin. The small turbocharged engine means you change gear earlier than expected, and the shift from first to second comes so quickly that you have to have your hand hovering over the lever in preparation. Engage second, the car finds traction, and there’s a deep thrumming as this tiny engine amasses big speed. Ford quotes a 0-60mph time of below four seconds; we record a best of 4.19 seconds.

Next comes the KTM X-Bow RR, which seems to be fighting with one hand tied behind its back. Its Audi engine might produce the most power at 360bhp, but the X-Bow weighs 200-300kg more than the others at 810kg and — uniquely in this company — has a fully manual gearchange. For the others, you don’t need the clutch once you’re up and running.

After the Ford, the cabin feels almost luxurious: the pedals slide forward and back to compensate for the seats that are fixed and moulded into the carbon-fibre body structure, and you quickly find a comfortable driving position.

You need to manage a little wheelspin from launch in first gear, but it’s not as manic as the Caterham, and the slightly soggy throttle makes holding a constant 4000rpm easier than in the Ford. It gets off the line relatively neatly, and the short gearlever positioned directly next to the steering wheel does minimise the handicap of shifting manually. There’s a spine-tingling roar of turboboost as the X-Bow hits its stride in second gear, digging into the tarmac and fast-forwarding like a rocket-propelled bathtub. It goes the fastest so far: a synapse-scrambling 3.26 seconds.

We’ve left what should be the fastest machine for last: the Ariel Atom 3.5R. Its maker has squeezed 350bhp from a supercharged 2-litre Honda Civic engine, and the noises made by the mechanicals are quite alien. Flatten the accelerator in first gear and the Atom automatically holds itself at about 4500rpm with a blustery stutter, and from there you simply remove foot from clutch.

There’s split-second wheelspin before the Atom seems to launch into the Large Hadron Collider. At first you’re overwhelmed with speed and fear and adrenaline and you hit the rev limiter, but practice soon teaches you to pull the paddle shifter for second gear sharpish.

What happens next is extraordinary: a violent burst of air heralds the pneumatically activated gearchange, and then the Atom shoots forward in a pummelling barrage of g-force. If you could drive a rollercoaster, it would feel a lot like the Ariel Atom 3.5R.

The Atom is the fastest of four incredibly rapid cars and wins the inaugural Sunday Times Speed Trials — but only by three-tenths of a second. And only in a straight line. When we later tested the Atom wheel-to-wheel against the KTM X-Bow around the track, that margin vanished as the Austrian-built rival showed off its aerodynamic advantages through the bends.

So what have we proved? First, we discovered that there are some mind-bendingly fast cars out there that are road legal and don’t cost the earth. But second, and more important, we have confirmed what Chapman established half a century ago: to increase speed, you must remove weight.

To physicists it may be a glimpse of the blindingly obvious, but to car manufacturers preoccupied with building engines that deliver ever-increasing amounts of horsepower, it could be a useful reminder: less is sometimes more. 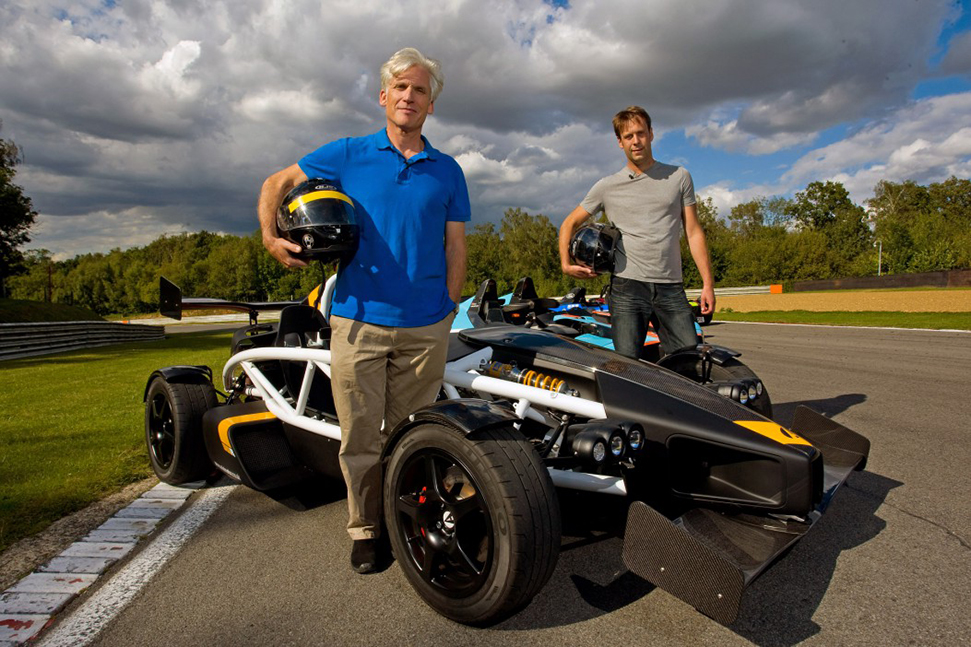 KTM X-Bow RR
Price £86,400
Engine 1984cc, turbocharged 4-cylinder
Power 360bhp
Acceleration 0-60mph 3.3sec (claimed) 0-60mph: 3.26sec (tested)
Top speed 145mph (estimated)
Fuel / CO2 Not available
Rating *****
The Austrian firm KTM is best known for its trials motorbikes, but it launched the X-Bow in 2008 with help from racing-car expert Dallara. The X-Bow has a full carbon-fibre monocoque, with a 2-litre turbocharged Audi engine mounted behind the driver, and is the only one of the four here to have a fully manual gearchange. Prices for the range start at £58,238.

Formula Ford EcoBoost
Price Not available to buy
Engine 999cc, turbocharged 3-cylinder
Power 202bhp
Acceleration 0-60mph: sub-4sec (claimed) 0-60mph: 4.19sec (tested)
Top speed 159mph
Fuel / CO2 57mpg (at 75mph) / Not available
Rating ****
The Formula Ford EcoBoost is a racing car converted for road use — with mirrors, handbrake and so on — and features a three-cylinder turbocharged engine that is also found in Fiestas and Focuses. It has lapped the Nürburgring in 7 minutes and 22 seconds — faster than the Lamborghini Aventador.