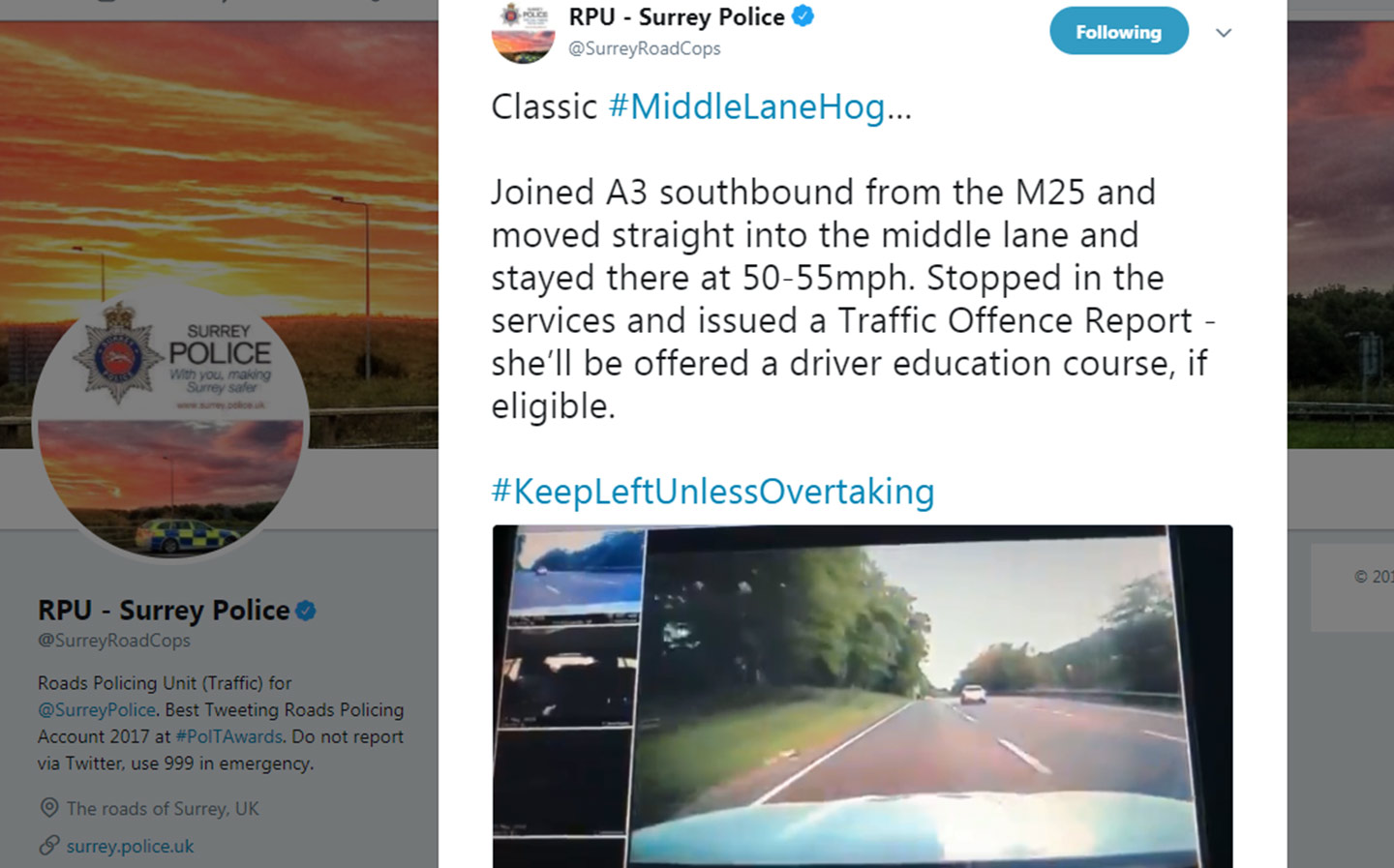 IF YOU get frustrated by drivers sitting in the middle lane of the motorway, when the inside lane is perfectly clear, then you’ll take comfort in the knowledge that the police are doing something about offenders.

Surrey Police tweeted a video of one such lane hog on the M25 and said they pulled the driver over at the next services.

She was duly issued with a Traffic Offence Report and will be offered a driver education course, if eligible, according to the tweet, which used the hashtag #KeepLeftUnlessOvertaking.

Joined A3 southbound from the M25 and moved straight into the middle lane and stayed there at 50-55mph. Stopped in the services and issued a Traffic Offence Report – she’ll be offered a driver education course, if eligible.#KeepLeftUnlessOvertaking pic.twitter.com/CeHcqDHdpH

Rule 264 of the Highway Code says:

That means all cars must return to the left-hand lane, even when there aren’t any other vehicles in view. It’s a simple rule that can even be applied to roads with four lanes (or more).

Drivers get frustrated by middle lane hoggers as it can cause congestion by creating a bottleneck, as traffic is forced to funnel through the outside lane in order to overtake. If the driver in the middle lane moved over, the same traffic could be split over two lanes.

Middle-lane hogging is an offence in the eyes of the law, under the category of ‘Careless Driving’, which also includes tailgating, accidentally driving through a red light and even being distracted by eating or drinking.

Overtaking a middle lane hog on the inside can also attract the attention of the law, as we found out to our cost in 2015.

The wrongs of overtaking on the inside: does being branded a careless driver fit the crime?

Since 2013, police have had the power to hand out on-the-spot fines of up to £100 and three penalty points. However, in this case it looks like Surrey Police favoured re-education over a fine, if possible.

A Traffic Offence Report (TOR) may result in a Fixed Penalty Notice, a court hearing or a “diversionary course”, which cover things like driving with excessive speed, not wearing a seatbelt, or other motoring offences such as driving through red lights or using a mobile phone while driving. Recipients will receive a letter advising them of the options available.