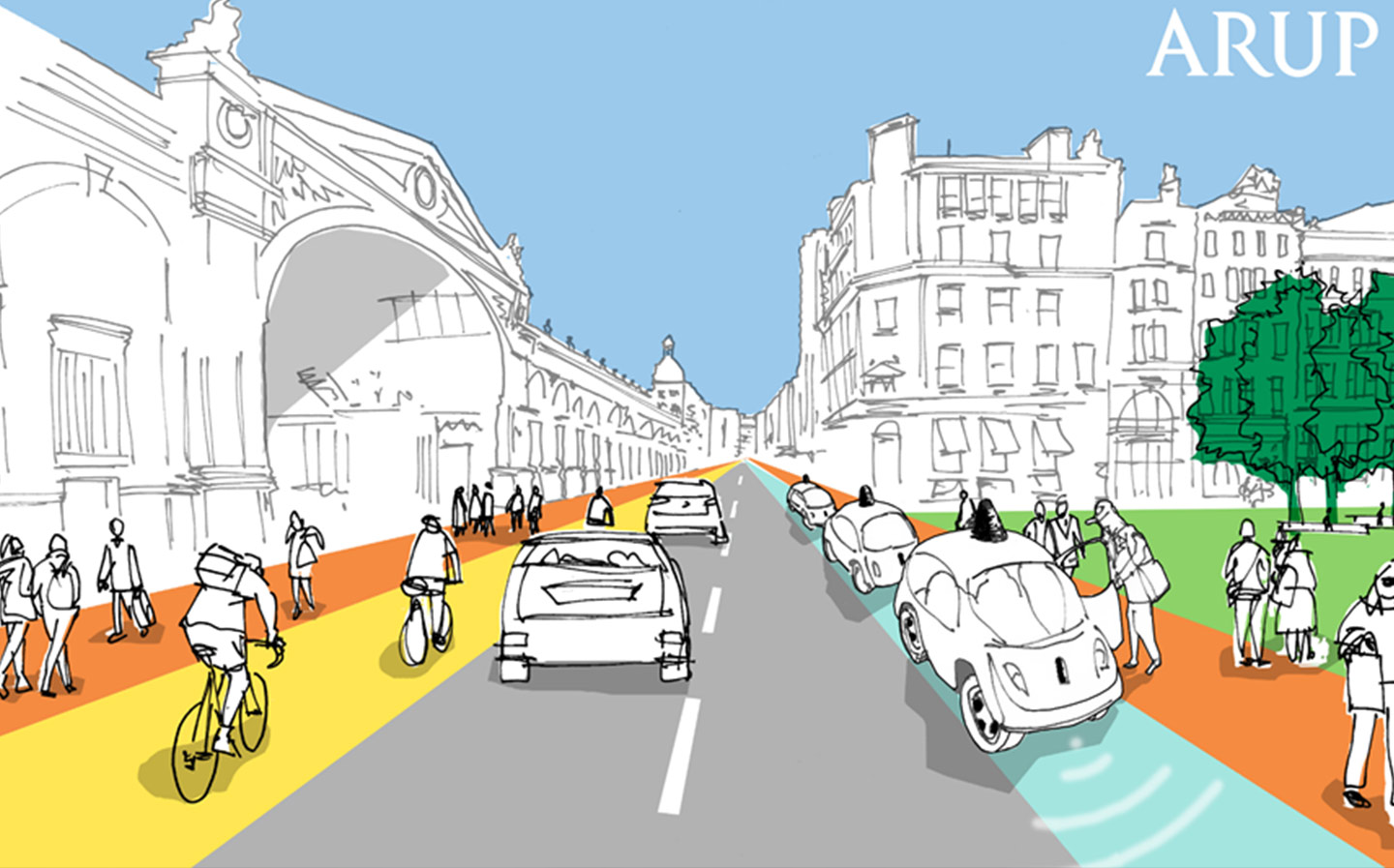 A NEW type of city centre pavement that can widen or narrow according to traffic demands at different times of day has been shortlisted for government funding so that the idea can be developed and tested.

FlexKerb has been designed to allow connected and autonomous cars (CAVs) to co-exist with cyclists, pedestrians and other road users for maximum efficiency.

Over the course of a day a FlexKerb section of road uses embedded LEDs of different colours to indicate its function, and can switch areas from autonomous vehicle rank at rush hour to cycle path at lunchtime, pedestrian plaza in the evening and loading zone overnight.

Red lighting could indicate pedestrian use, blue could mean cycle use and green could designate space for motor vehicles.

FlexKerbs would use real-time traffic data from smart cameras and other sensors to ensure that the space both matches demand and achieves local transport goals, according to Arup, the engineering company behind the idea.

Space for cars could even be reduced to limit exhaust emissions when air pollution reaches high levels, says the company.

Susan Claris, associate director for transport consulting at Arup, said: “The streets we have at the moment have mainly been designed many years ago before different types of technology or changes in travel behaviour came along. This idea is about having something that’s more responsive and more adaptable to changing travel patterns.

“A key part of it is about having streets that are healthier places for everyone. Rather than trying to maximise vehicle throughput, which was the thinking that characterised transport planning 20 or 30 years ago, it is about looking at how streets can be managed to make them healthier and happier places, and more economically viable.”

Arup’s concept is one of five ideas to be awarded up to £30,000 by the government’s National Infrastructure Commission. It will conduct a desk-based trial of the technology by applying the concept to a high street in London — testing what impact it could have on vehicle and pedestrian flows. The winning developer will receive £50,000 in the autumn for their efforts.

The Times highlighted possible safety issues, pointing out exisiting concerns over ‘shared space’ roads, which are designed to create a less intimidating environment for pedestrians by reducing the dominance of motor vehicles. It pointed to a Chartered Institution of Highways and Transportation report that said some blind and visually impaired people avoided such roads altogether.

Ms Claris said that safety was part of the challenge. “We need to look at it in more detail and see how that can be resolved.”