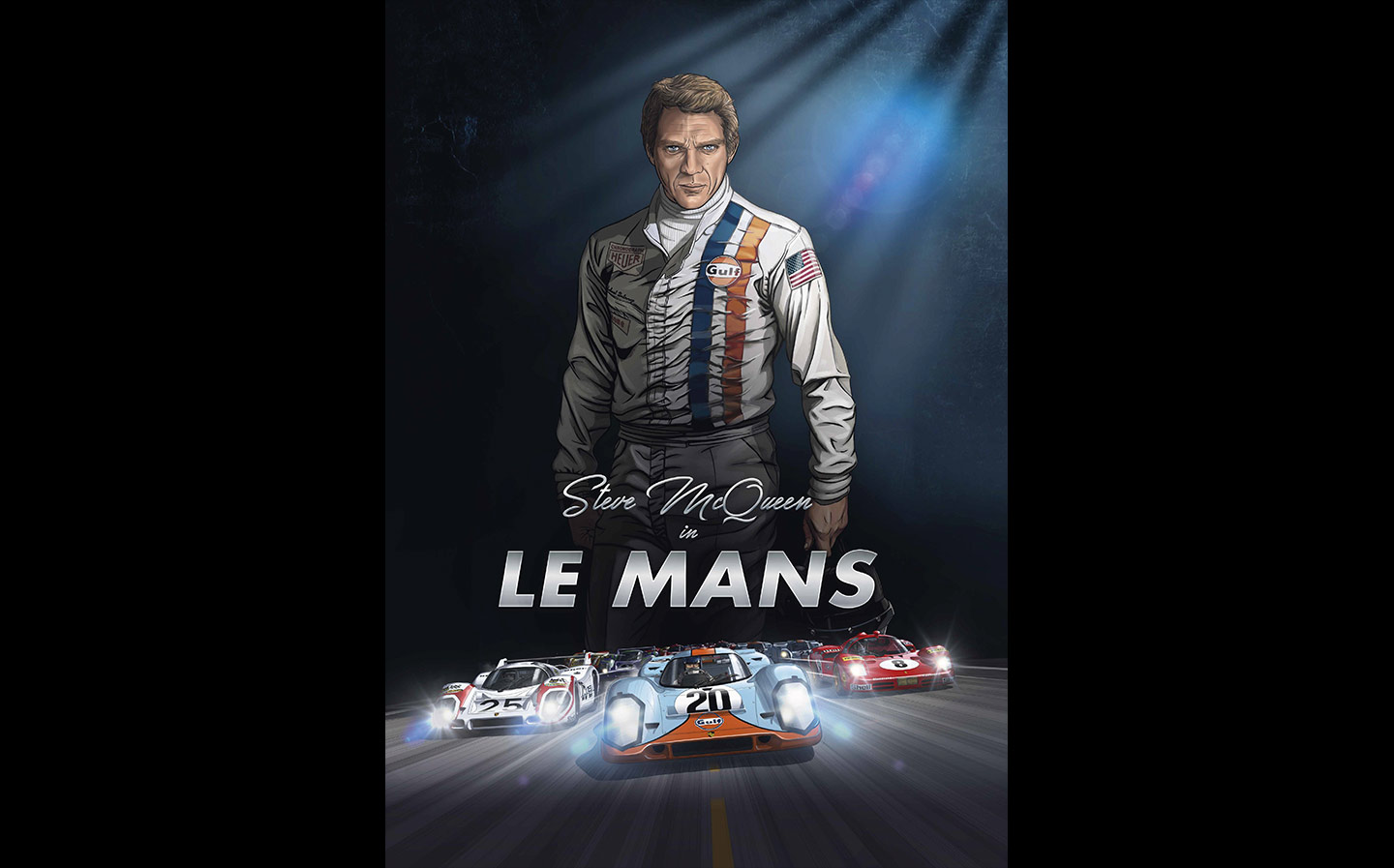 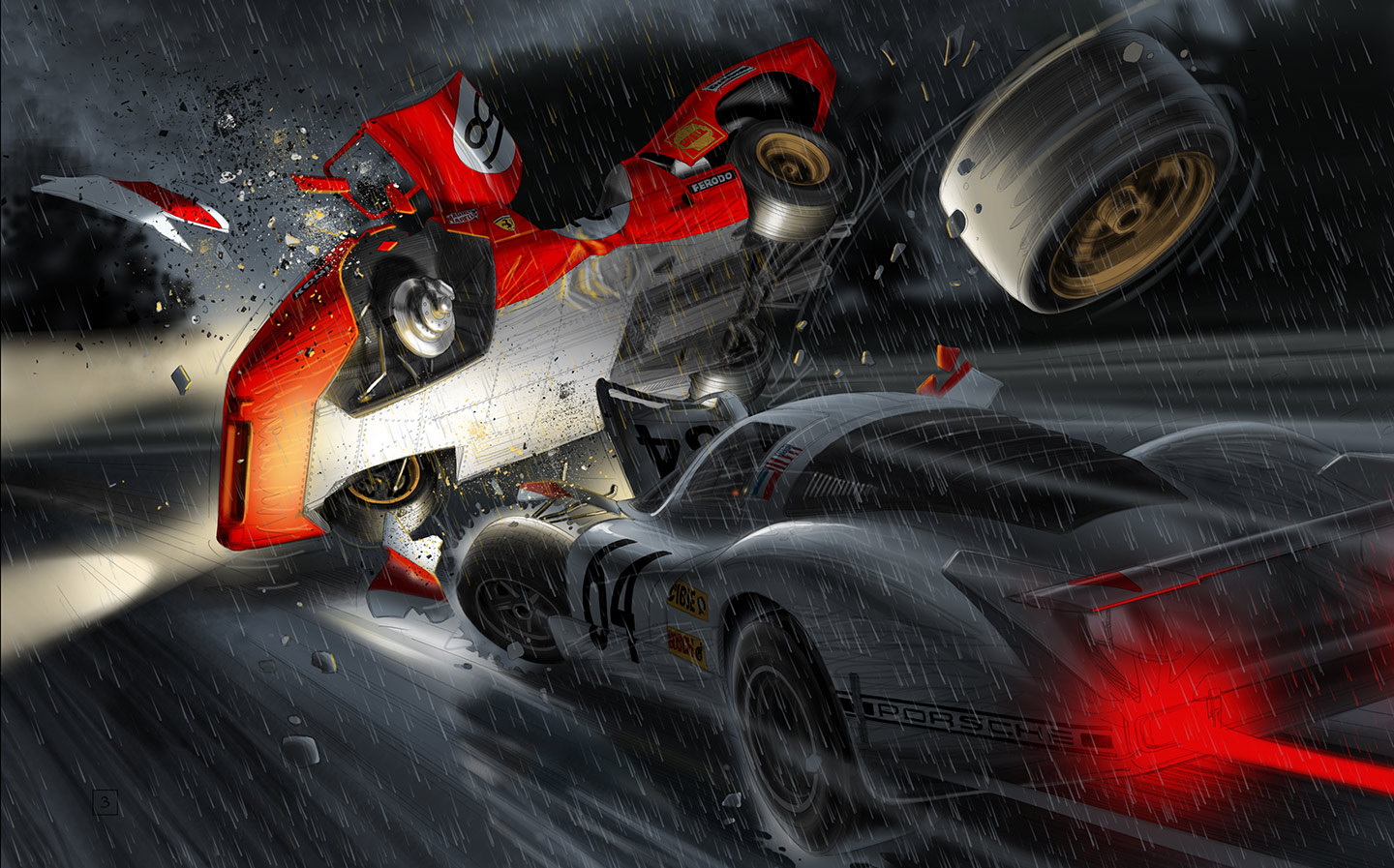 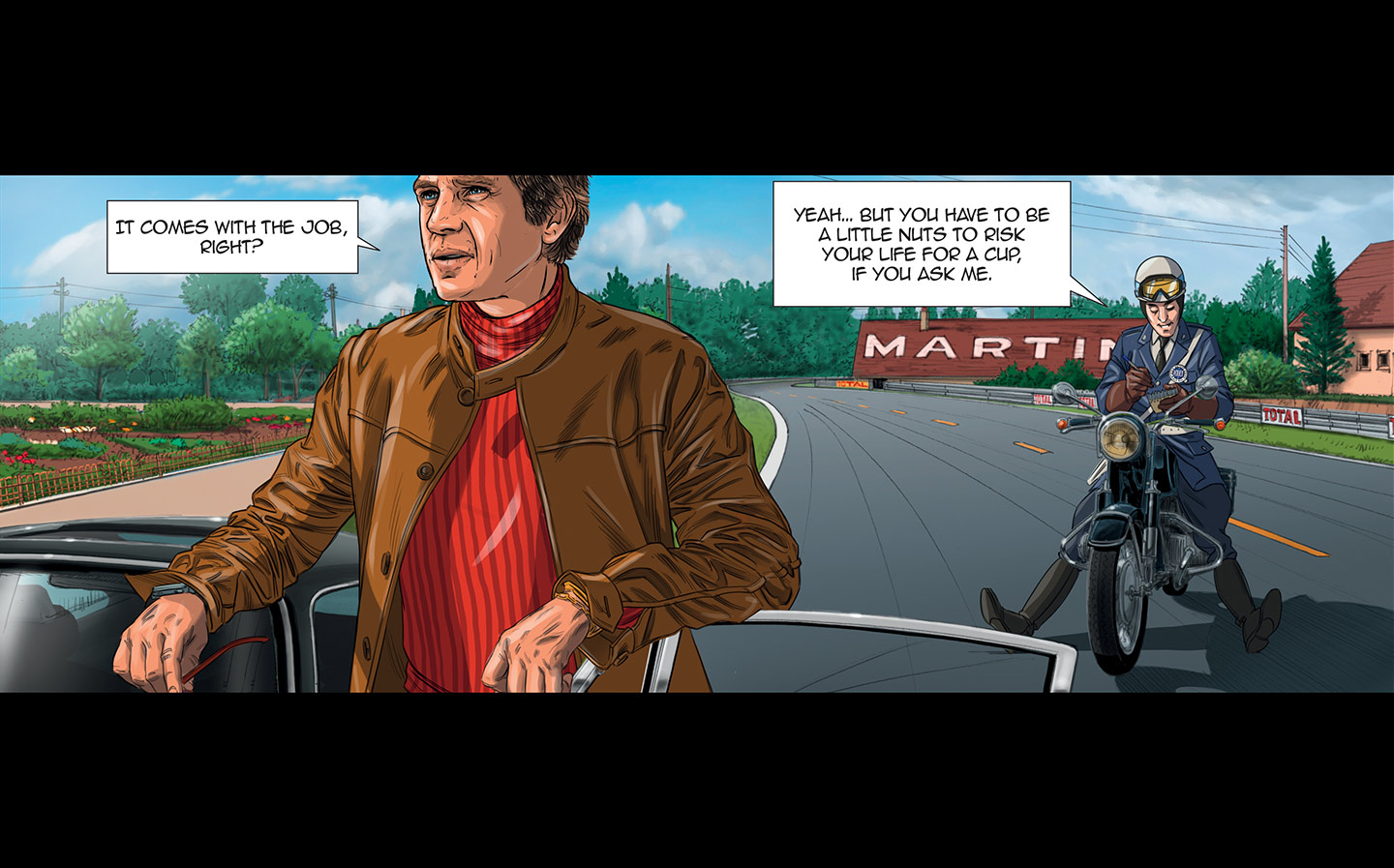 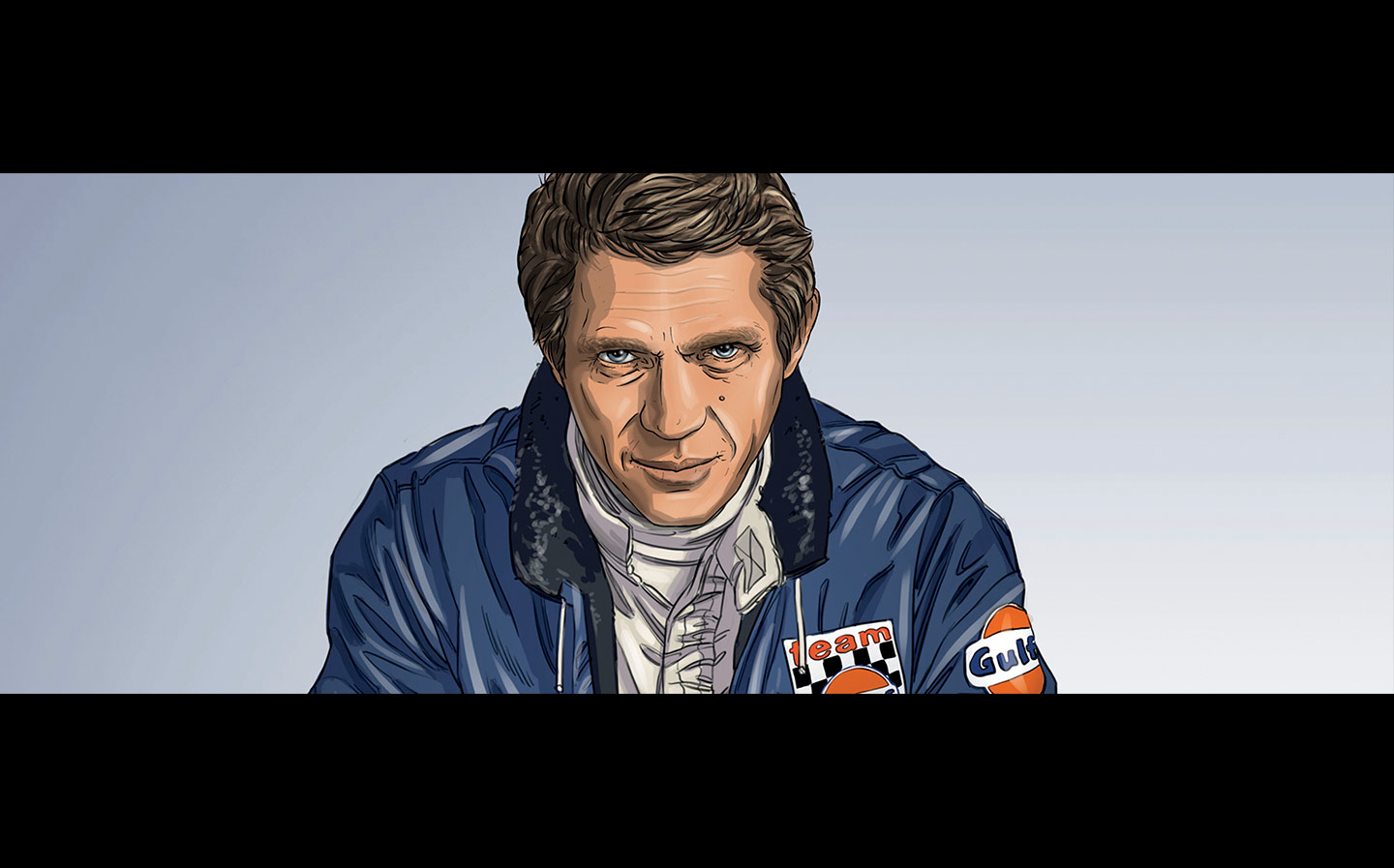 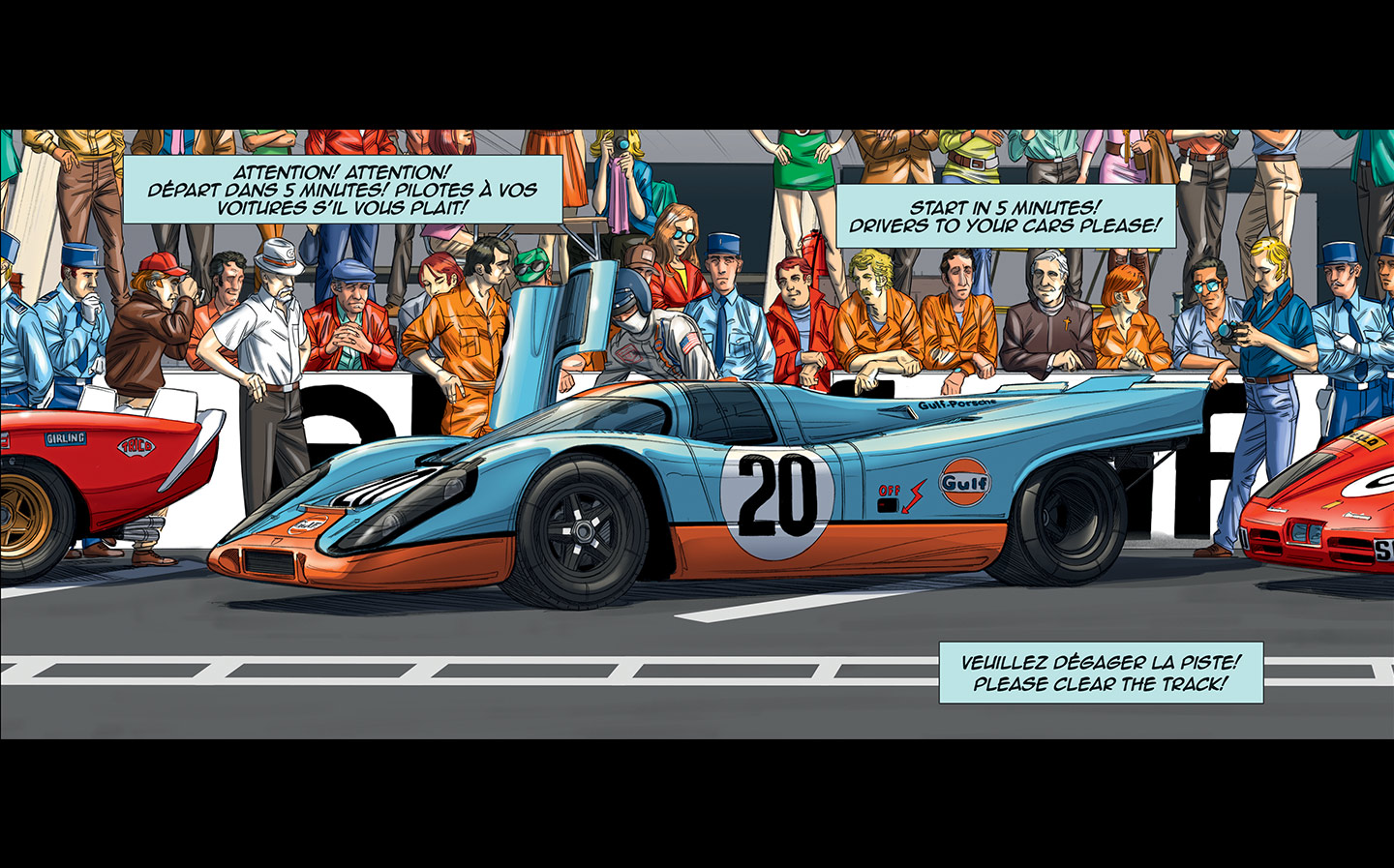 IT’S A common idea that a true genius must be a little unhinged mentally, and by that criterion Sandro Garbo, the artist behind new graphic novel Steve McQueen in Le Mans, might just qualify: the idea for the book came to Garbo in a dream.

A fan of motor sport, Belgian comics and Marvel Superheroes, Garbo explains how she saw McQueen in her sleep: “I painted my friends’ cars for years, and then in 2013, Steve McQueen appears in my dream and tells me to create a graphic novel about his movie to keep the myth alive. The next day I set to work. I assembled a team and it became a new mission in my life.”

The other very important thing needed is talent, and Garbo — along with his team at Garbo Studio — certainly appears to have it in spades. The artwork in Steve McQueen in Le Mans is second to none. The wonderful 1970s sports cars and locations are recreated in immaculate detail, and the characters are drawn to show great heart and expression.

Beyond one man’s passion for the subject matter and skill with a paint brush, one may wonder if there is a reason for this new graphic novel to exist. The 1971 film, starring McQueen as Michael Delaney, a driver competing in a Porsche 917 endurance sports car, is flawed but many still consider it a classic. What is the point of creating a book of the film?

Comparing the two, it becomes clear that Garbo’s work not only complements the movie but adds to it in many ways. For example, ignoring exceptional announcements over the public address system, it is a full 45 minutes before the first piece of meaningful dialogue in the film. Garbo jumps straight in there on the first page and, in fact, the friendly but competitive exchange of words comes in a flashback scene of his own creation that adds some depth to Delaney’s relationship with former rival Piero Belgetti.

“Close-ups of facial features that weren’t included, or weren’t possible, in the making of the movie heighten the story’s sense of drama”

The story then immediately moves to the accident between Belgetti and Delaney in the 1969 Le Mans race, which is shown as a flashback in the movie but comes a little later on, as Delaney is arriving for the 1970 race. Garbo shows the accident in horrific detail, the nature of a graphic novel meaning your eye naturally lingers on the more harrowing moments, such as Belgetti inside his Ferrari fireball, and close-ups of faces and twisting metal that weren’t included, or weren’t possible, in the making of the movie. It heightens the story’s sense of drama.

It should also be noted that the graphic novel ends with a cliffhanger and the note, “End of episode 1”: clearly there is more to come.

Purists may at first be alarmed at the way Garbo has taken the source text and adapted the narrative structure and added dialogue where there once was none — part of the appeal for some, was the very absence of chat in favour of long, atmospheric sections, after all. But Garbo clearly has a sincere reverence for the source text (“I don’t think anyone ever filmed a car race in such a realistic and intense way”) and viewed today, at least, the 1971 movie lacks the pacing to retain the interest of anyone but a true fan of the famous 24-hour race.

Steve McQueen in Le Mans, on the other hand, has the potential to excite a whole new generation.