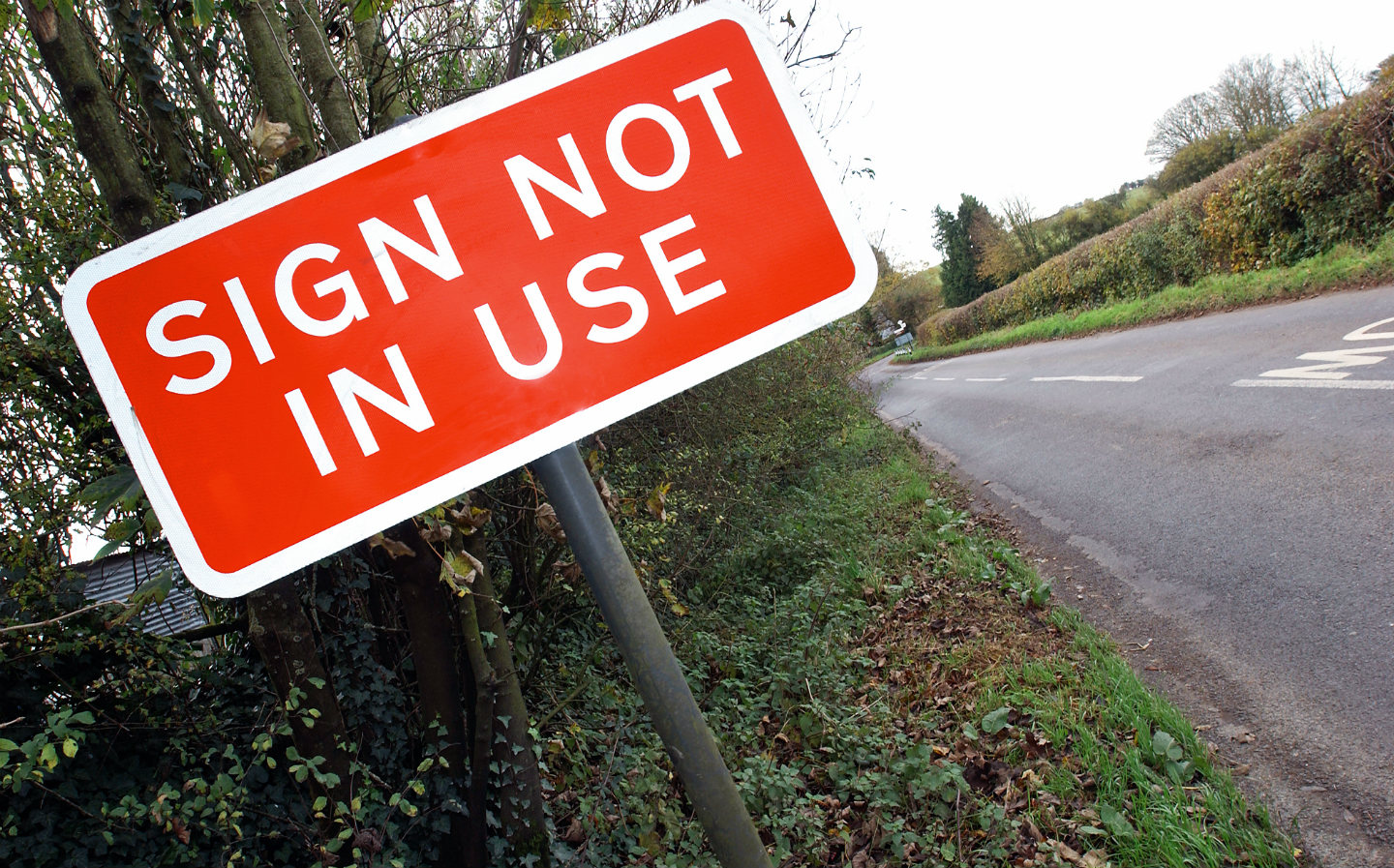 POINTLESS ROAD signs could be removed across the country after a government-commissioned report concluded that the vast majority of warnings were “entirely superfluous”.

The Department for Transport (DfT) is preparing to issue fresh guidelines to councils that are likely to reduce the country’s 4.3 million signs. The review found that numbers had doubled in 20 years, cluttering streets, wasting money, confusing motorists and possibly leading to more accidents.

The report, obtained by The Times under freedom of information, said the overuse of pointless signs had “become so widespread that it is verging on national humiliation”. The rise was blamed on the “totally fallacious” notion that more signs reduce accidents or prevent councils being sued.

It recommended that whole categories of signs be scrapped and others be used sparingly, with a suggestion that nine in ten were removed from streets. Those facing the axe should include signs warning of traffic lights, roundabouts or junctions ahead, many brown tourist signs, roundabout countdown markers and those indicating the end of motorway regulations, it said. Experts also called for signs warning of speed cameras to be scrapped in favour of an online database telling motorists where they were positioned.

The report said that most signs were entirely superfluous or assumed an “insulting degree of stupidity on the part of drivers” by simply repeating what is already in the Highway Code. It also recommended creating a series of golden rules for councils, including ensuring that most signs are no higher than 2.1 metres, banning the doubling up of signs in the same location and ensuring those backed with reflective material were no longer illuminated by their own spotlights. The report added that road markings should be used as alternatives to signs in most cases.

The Road Signs Task Force, which conducted the review, was created by the DfT in 2015 under the leadership of Sir Alan Duncan. He left it a year later when he became a Foreign Office minister. A series of interim measures were released in 2016, including requiring councils to place a “remove by” date on temporary road signs. However, the task force’s final report, completed in March last year, was never formally released until it was obtained by The Times last week.

The DfT has confirmed that it is now preparing to update its traffic signs manual, which guides local authorities, after the review. It said it expected to include some of the review’s golden rules to encourage decluttering which will reduce the number of unnecessary signs being used.

The report said that the number of road signs had more than doubled from 2.16 million in 1993 to 4.57 million in 2013. “This is unsustainable and bears out the need to reduce signing wherever possible. Although impossible to count, it seems clear that many of the country’s signs and posts are unnecessary and could be removed.

What is happening to the road signs on Addiscombe Road very confusing and contradictory. pic.twitter.com/yOYts9f2AB

The DfT said: “Nobody likes clutter, which is why we want to reduce the number of unnecessary traffic signs being used. Local councils are best placed to decide if they want to remove, replace or install new signs on their roads. We provide guidelines to help them make sure their signs are clear for road users and that comply with regulations.”

The signs that clutter UK roads 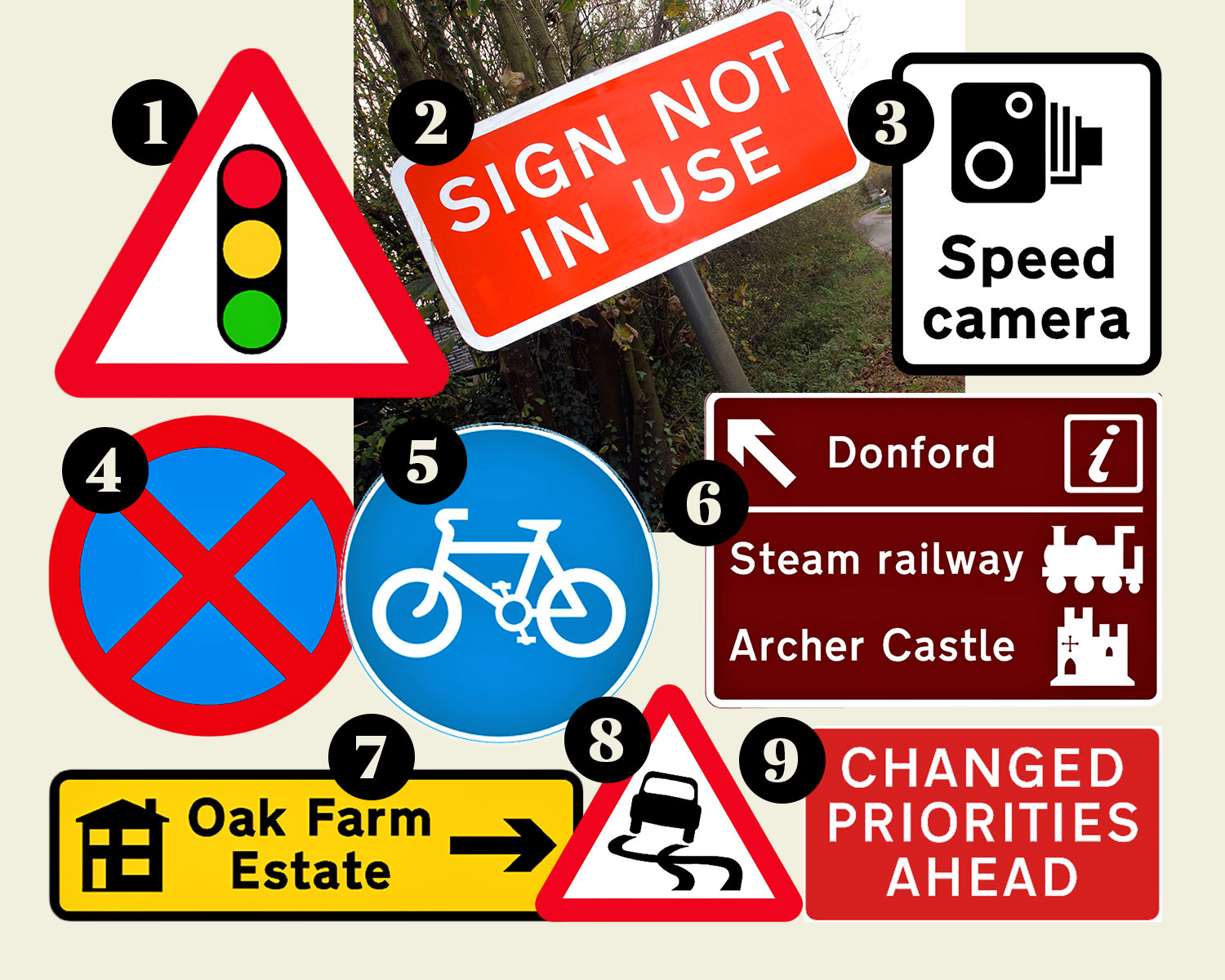 1. Traffic lights ahead
“Entirely unnecessary if the lights can clearly be seen.”

2. Not in use
If an electronic sign is “not displaying a message temporarily then it is clearly not in use”.

3. Traffic camera enforcement
Put up before box speed cameras to nudge motorists into obeying the limit but not needed to penalise drivers. Motorists should be able to find the location of cameras via a national database, negating the need for thousands of signs.

4. No stopping (Clearway)
“These signs are outdated and it is questionable how widely they are understood.”

5. Cycle warning
The “vast majority . . . serve no useful purpose” because cyclists are a common sight on roads and drivers should always be aware of them. The most notable exception is “where a cycle track crosses a high speed road”.

6. Brown tourist signs
“Perfectly acceptable so long as they are not allowed to be used as advertising space for local hospitality businesses that hold no real claim to be tourist sites”. Councils should also be careful to ensure they remain relevant: “16th century inn” is not “in itself a useful piece of information if the driver has no idea what it actually refers to.”

7. Housing development
Put up by developers. Can be useful to residents and delivery companies but are often left beyond their six-month limit. Should be “much stricter limits on the length of time they can be left in place”.

8. Skid-risk
These signs are only meant to be temporary. If a road is judged to be a skid risk, it is because additional maintenance work is required to the surface. The report says that once remedial work has been completed the “sign is no longer needed and should be removed”.

9. Temporary signs
Warnings of some kind of new road layout ahead are “entirely superfluous as any driver who regularly uses the road will have been well aware of changes being made as they will have witnessed the road works that preceded it”. Too many temporary signs are left in place permanently.