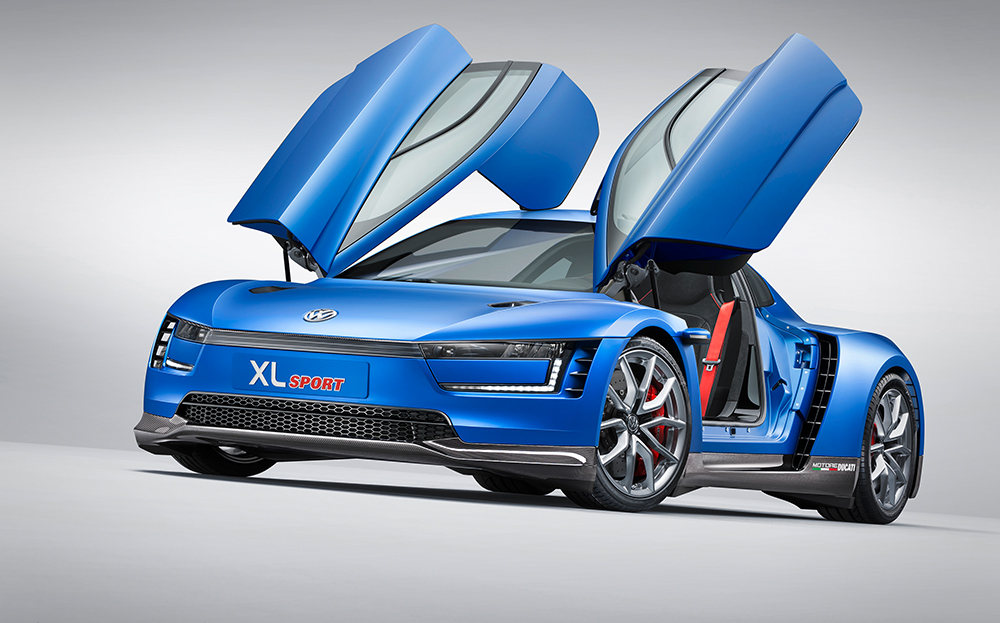 ULTRA-GREEN AND ultra-fast; that’s the holy grail of motoring these days. Volkswagen achieved the first with its XL1, which claims to be the world’s most fuel-efficient car thanks to a 313mpg economy figure. Now it has managed the second by pumping the XL1 full of steroids to produce the XL Sport, unveiled today at the 2014 Paris motor show.

In the true tradition of sports cars, the XL Sport is rear-wheel drive and mid-engined, doing away with the XL1’s hybrid system and replacing it with a V-twin motorcycle engine derived from the Ducati 1199 Superleggera motorcycle (Ducati is part of the VW group). The 1199 Superleggera is said to be the world’s most powerful two-cylinder motorcycle and the engine is a screamer, revving to 11,000rpm.

Its power output of 197bhp doesn’t break any records in the car world, however, but because the XL Sport weighs only 890kg (half the weight of a Volkswagen Golf), and the super-sleek design makes it slipperier than any other sports car, VW claims that for its power output,  it is the world’s fastest car.

Top speed and 0-62mph times are a claimed 167mph and 5.7 seconds respectively, when combined with the seven-speed DSG (automatic) transmission.

Helping the XL Sport stick to the road is a modified body. It is slightly longer and wider than the standard XL1 at 4291mm long, 1847mm wide and 1152mm tall. The 2424mm wheelbase is longer than the XL1, too. The XL Sport has wider wings, and larger wheels made of magnesium, making them 23.9kg lighter than aluminium versions. Like the XL1, much of the body is made of carbon fibre, which helps reduce weight further still.

Revised aerodynamics including special “air curtains” that direct the frontal air into specific channels, wheel-arch ventilation, an even more optimised underbody, lift-reducing air ducts in the bonnet, an extendible rear spoiler (powered by the same unit found in the Lamborghini Aventador) and adaptive waste heat vents incorporated in the rear hatch (a louvre that opens and closes automatically as required to conduct excess engine heat away).

Inside, the XL Sport is based on the interior of the XL1 but has been modified with a number of bespoke details. These include a digital instrument cluster, specially designed for motor sports, with an individual lap time and oil pressure display, and a steering wheel with red stitching and aluminium gear shift paddles. To match the red stitching in the steering wheel, the seat belts are also red.

Volkswagen has not said whether it intends to put the XL Sport into production (the XL1 is being produced in a limited run of 200 examples), but the manufacturer has previously indicated that it would build one example of the car to gauge reaction.

Search for and buy your next Volkswagen on driving.co.uk