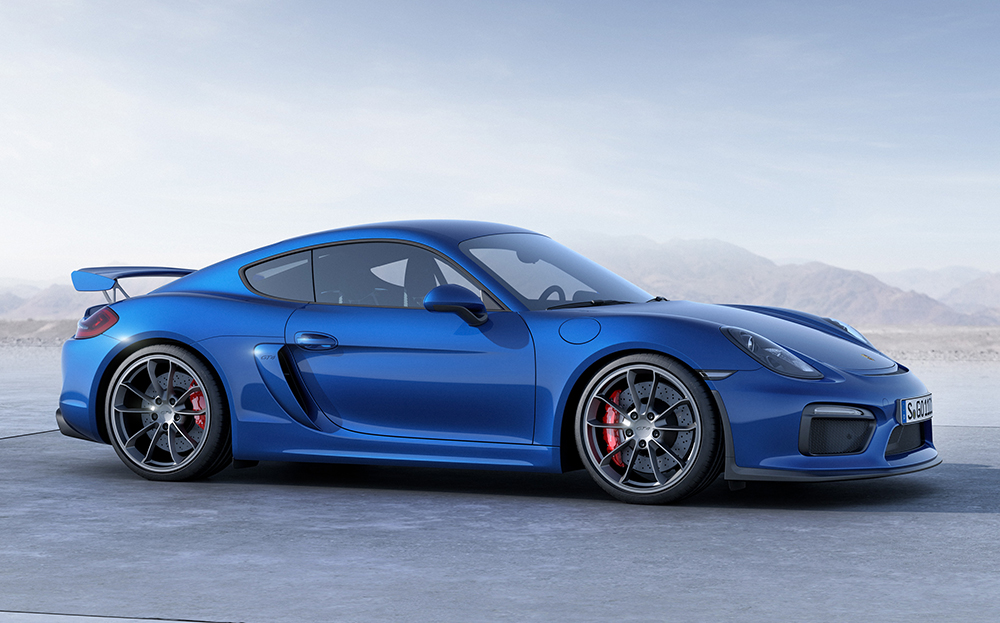 IT HAS been one of the worst-kept secrets in the sports car world, and now Porsche has confirmed what fans already knew: it is launching the GT4, a high-performance version of the Cayman coupé. These are the first official pictures and details of the Cayman GT4, which costs £64,451 and is available to order today.

Browse the used Porsches for sale on driving.co.uk

Essentially, the Cayman GT4 is a cut-price version of the 911 GT3, a car designed to be driven to the limits on a racetrack. Its big brother costs a cool £100,540, so what does the Cayman GT4 lack that accounts for the £36,000 price crash?

Not much other than a few horsepower, as far as Driving can tell. Powering the upcoming Cayman GT4 is the mid-mounted 3.8-litre flat-six engine found in the 911 Carrera S, tuned here to produce 380bhp at 7400rpm – almost 40bhp more than the Cayman GTS and just 15bhp less than the 911 Carrera S. However, it’s still some way short of the 469bhp that the 911 GT3 can muster.

As you’d expect, the Cayman GT4 is no slouch. Porsche says it can complete the 0-62mph dash in just 4.4 seconds and power to a top speed of 183mph.

The GT4 cannot be ordered with Porsche’s PDK auto gearbox, a sign that this is a car for a dedicated band of driving purists. Its power is transmitted to the rear wheels via a standard six-speed manual transmission with so-called dynamic gearbox mounts, which electronically minimise the vibrations of the drivetrain.

Despite the car’s high-performance intentions, the official fuel consumption figure is 27mpg; emissions are 238g/km of CO2.

Porsche claims the new performance model can lap the Nürburgring Nordschleife in 7 minutes 40 seconds, thanks in part to the uprated engine as well as retuned suspension that sits some 30mm lower than a standard Cayman. It also features the Porsche Torque Vectoring (PTV) system with a mechanical limited slip differential to help the rear tyres generate better traction out of bends.

The bodywork has also been altered to generate more downforce over the front and rear axles. Three gaping inlet openings in the nose and a large fixed rear wing form part of the Cayman GT4’s aerodynamic package, while customers can specify carbon ceramic brakes, carbon fibre-reinforced seats and a special Sport Chrono package.

Drivers who intend to partake in club racing or track days can choose a Club Sport package; this includes roll cage behind the two seats, six-point racing harness, fire extinguisher and a battery master switch. A high performance driving course at the Silverstone-based Porsche Experience Centre is included with every GT4.

The car will make its world debut at the Geneva motor show next month and first customer deliveries are expected in the summer.

Battle of the ages: Matt Rudd takes on 89-year-old motocross champion in a Porsche 911