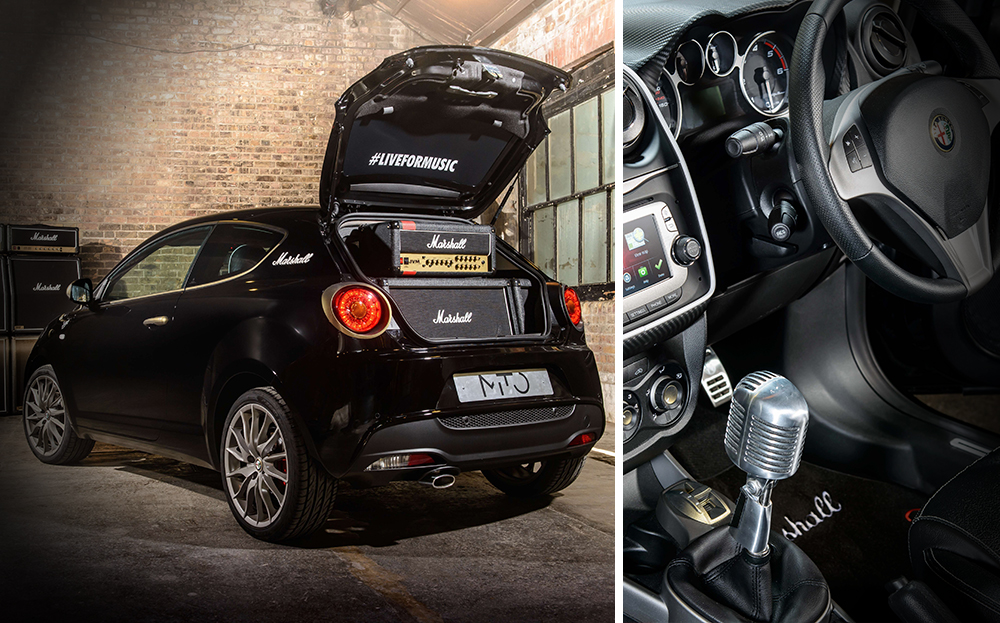 GOOD EVENING, Wembley! The tiny Alfa Romeo MiTo just got turned up to 11 in a collaboration with Marshall Amplification, the manufacturer of music amps made famous by the mock rockumentary, This Is Spinal Tap.

Alfa says the car draws inspiration from the look and feel of the instantly-recognisable Marshall amplifiers, with the gold panel finish of Marshall’s equipment on the grille, front and rear headlight surrounds, door mirror covers, door handles, side door trim and lower bumper trim.

The design influences continue with Marshall badges on each rear pillar, Jim Marshall OBE’s signature above the side indicators and a #LIVEFORMUSIC graphic – Marshall’s strapline – on the rear windscreen.

Inside, this moody Mito features Marshall tread plates on the door sills, white piping around the dashboard’s centre console and gold-effect trim around the Alfa “D.N.A.” driving mode selector, while the seats have been upholstered with the same materials used on Marshall’s amplifiers, including grille cloth on the seat centres and white piping around the inner seat contours.

Perhaps the most distinctive feature is the gear lever, with the standard knob being replaced by a classic Shure SH55 microphone.

The Marshall influence is not only skin deep – a 50w Marshall JVM205H amp running two 12 inch 75w speakers has been installed in the boot. The amplifier and speaker array is powered by a dedicated battery system allowing musicians to simply open the boot, plug in a guitar and crank up the power and play.

At the moment the Mito by Marshall is not planned for production, but it could serve as more than simply a wild concept: “Whilst this concept is an exciting exploration of ideas and themes at this stage, we hope it might influence a future special edition,” said Ivan Gibson, the head of Alfa Romeo UK.

The MiTo by Marshall concept gets its public debut at a special invitation-only screening of Dave Grohl’s Sound City documentary at Olympic Studios on June 24 featuring a live performance by Tim Burgess and Mark Collins of The Charlatans. It will then be exhibited at a series of automotive and music events through the rest of 2014.