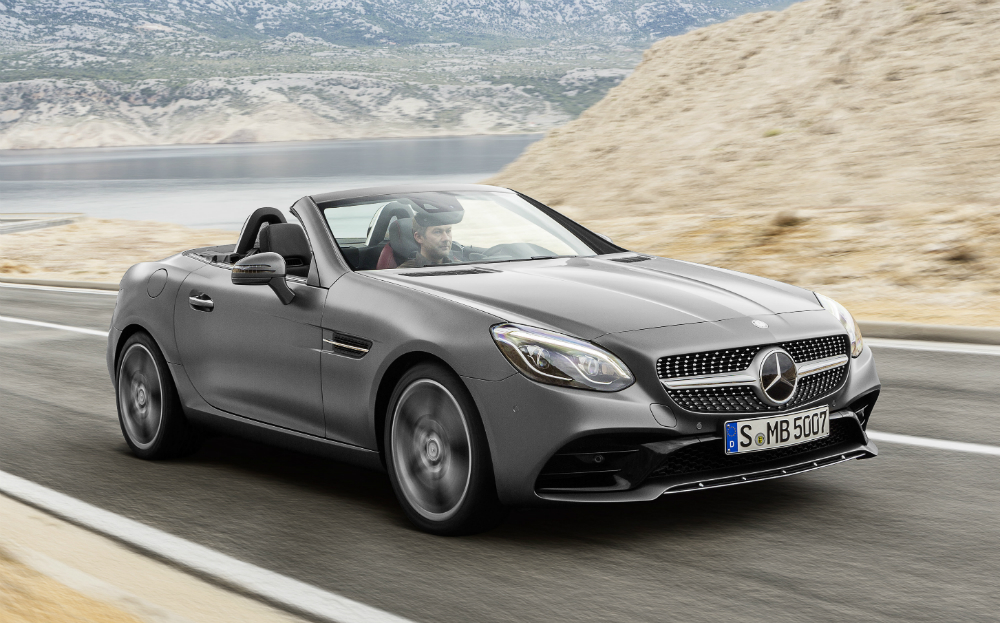 MERCEDES HAS facelifted its popular SLK roadster, rebranding it SLC to replace the name that first appeared 20 years ago.

Power will come from a range of four- and six-cylinder engines, with the most potent AMG edition getting a twin-turbo 3.0-litre V6 in place of the outgoing SLK55’s naturally aspirated V8.

As you’d expect, Mercedes hasn’t skimped on the technology. Amongst other things, the SLC will be offered with an LED Intelligent Lighting System, automatic braking, blind spot monitoring and traffic sign recognition.

As a facelift rather than an all-new car, the SLC gets a sleeker nose with a more prominent grille, bigger air intakes and a revised rear bumper. There are also fresh LED tail lights plus an updated folding hard top which can now be raised and lowered at speeds of up to 25mph. 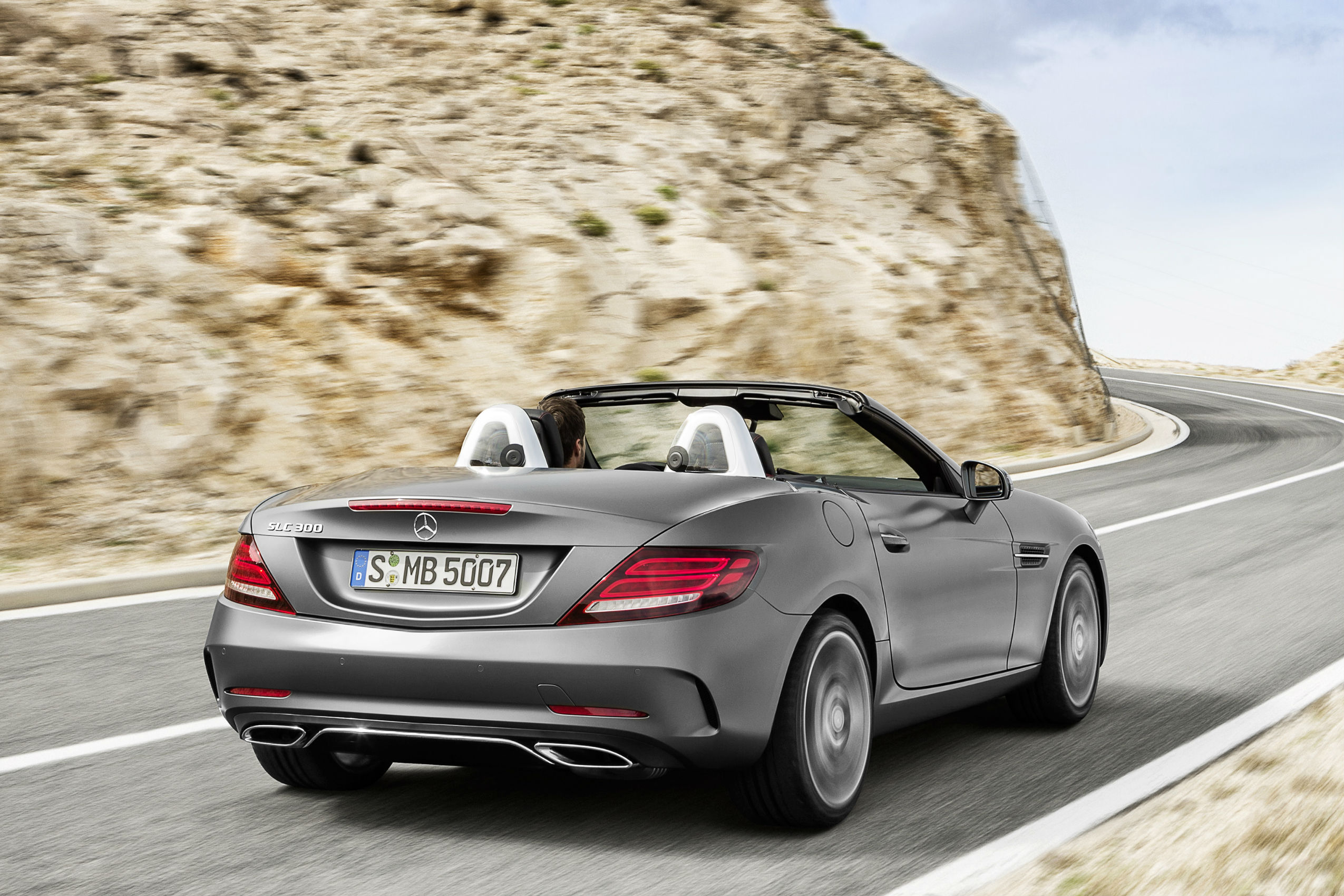 As before, there’s a ‘Magic Sky’ panoramic option for the roof. This electrochromatic panel enables the glass to be darkened at the touch of a button, so the amount of light entering the cabin can be varied.

The interior has been overhauled too, with extra aluminium trim highlights, a redesigned steering wheel and a wider range of colour options. There’s a bigger (seven-inch) screen for the display, giving access to the navigation, internet radio, phone and music.

The entry-level SLC 180 won’t come to the UK; the 156bhp 1.6-litre model will be reserved for mainland Europe only. Instead, the most affordable version for British drivers will be the 184bhp SLC 200, which like the 245bhp SLC 300 is powered by a 2-litre four-cylinder engine.

As with the outgoing SLK there will be a diesel option; the SLC 250d features the same 2143cc four-cylinder diesel seen in a multitude of other Mercs. Rated at 114g/km, the SLC 250d tops out at 153mph having covered the 0-62mph sprint in just 6.6 seconds.

Those who prefer power to economy are likely to be drawn more towards the range-topping SLC 43 AMG with its 367bhp V6 that’ll deliver 0-62mph in 4.7 seconds, CO2 emissions of 178g/km and an electronically limited top speed of 155mph. 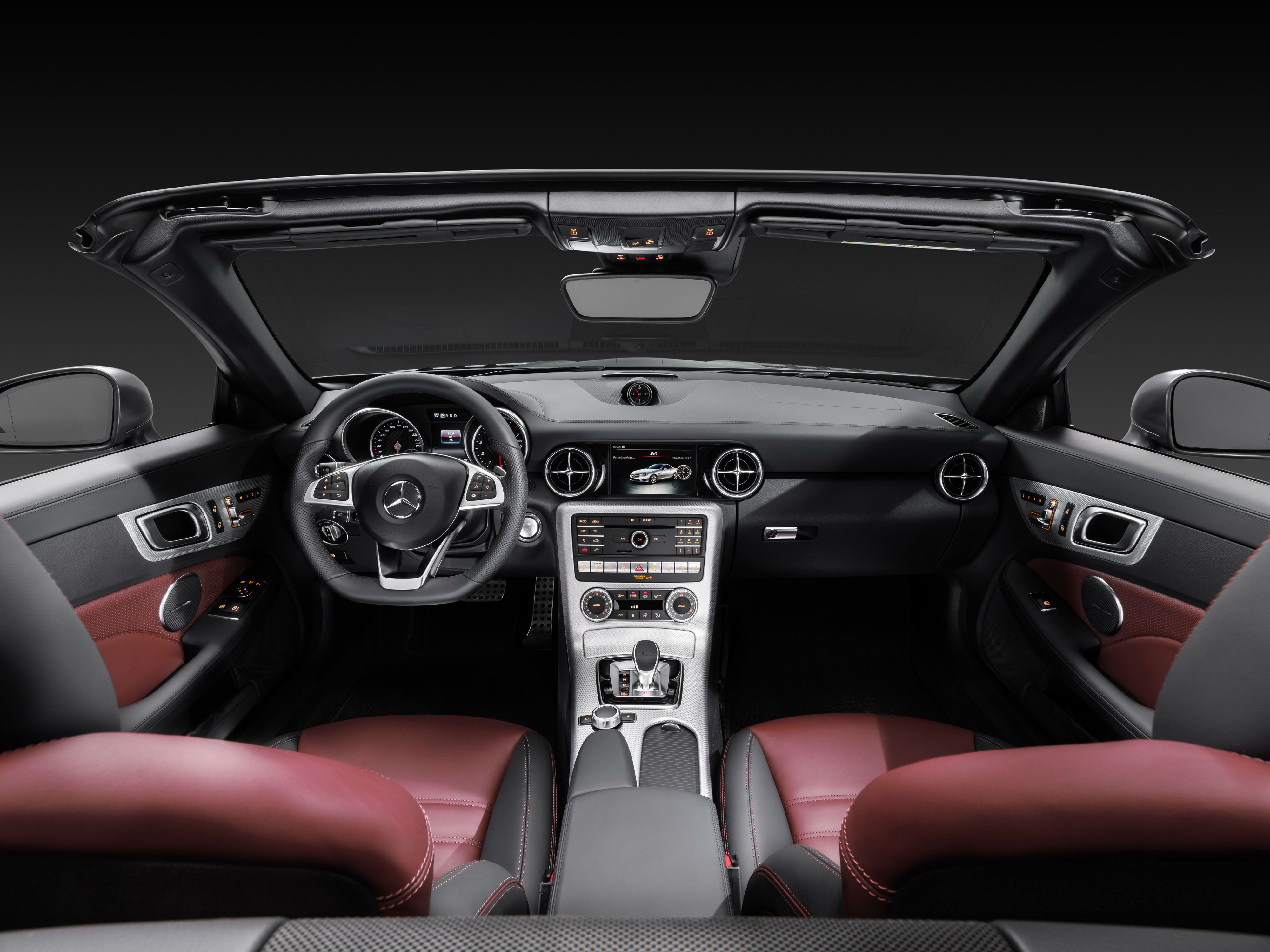 A nine-speed automatic gearbox will be standard on all SLCs apart from the SLC 200, which gets a six-speed manual transmission; the auto is optional however.

The SLC 300, SLC 250d and SLC 43 AMG will come with Dynamic Select, which allows the driver to adjust the engine, steering, transmission and suspension characteristics; it’ll be optional on the SLC 200. With five settings to choose between (Comfort, Sport, Sport+, Eco, Individual), the system allows the driving characteristics to be tailored to individual tastes.

Mercedes has yet to reveal prices and final specifications for the SLC as the first cars won’t be delivered until April 2016, ready for the new 16-plate. If you’re keen to be one of the first, hot-foot it to your local Merc dealer to slap down your order and deposit when the books open in mid-January 2016.