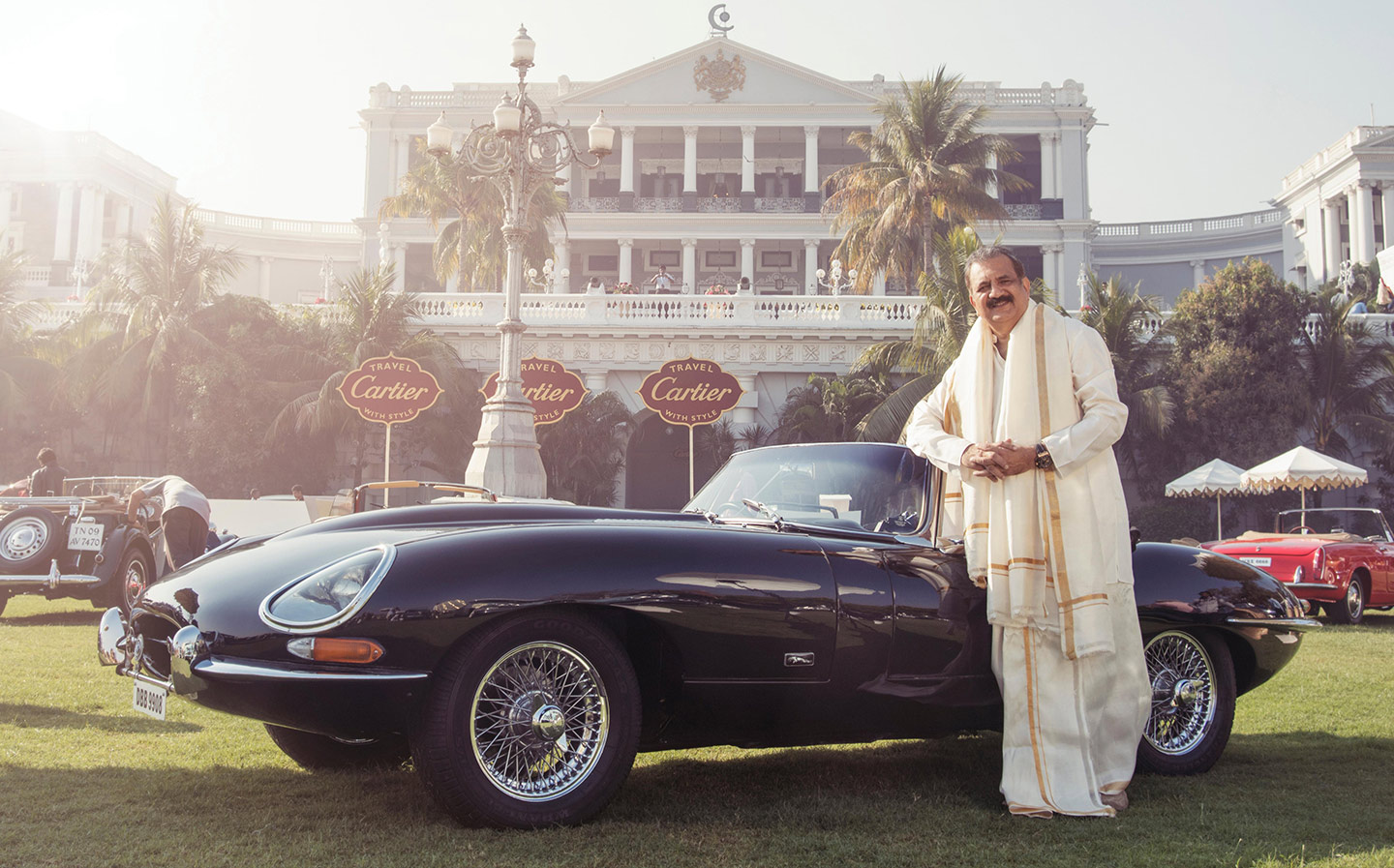 “ASKING which of my cars is most precious to me is just as painful as asking which of my daughters I love most,” says Dr Ravi Prakash, flicking a fleck of dust off his polished black E-type Jaguar. “It’s impossible. All of them are beautiful and have different attributes, which is why I collect them.”

Although any vintage car enthusiast might find it difficult to pick out their favourite, for Dr Prakash it’s particularly tricky. The eminent former cardiac surgeon from Bangalore, who was in Hyderabad last month to show his Jaguar at India’s Cartier Concours d’Elegance classic-car event, owns one of India’s largest collections of classic cars, with, he says, “more than 200, for sure, or perhaps even 250”.

He’s hazy about the precise number not only because several models are garaged in Britain and America, or because in aristocratic Indian society wealth isn’t openly discussed, but because, he bashfully admits, sometimes he isn’t quite sure how to break the news of new purchases to Mrs Prakash.

“He’s impossible,” says his charming wife, Sabena, shaking her head in mock exasperation. “When he finds one that he loves, he just can’t leave it, but doesn’t quite know how to tell me. So he’ll usually drop it casually into conversation, hoping that I might not notice. Some chance … ”

Although Mrs Prakash joshes about her husband’s “other love”, she’s pretty mad about motoring herself. She met the surgeon at a vintage car rally, and the first vehicle that he ever bought, which was a 1937 Sunbeam-Talbot, was a gift for her. “It is still my favourite,” she says, “because when the two girls were young, we had great days out in it, so it’s got good memories.”

Her girls, she adds, are petrolheads, too. The youngest, Shefali, oversees the family’s British collection of cars in London, and her sister, Rupali, creates motoring-themed works of art for car owners who want their prize possessions immortalised on canvas, shirts and silk scarves.

On Sundays the family take one of their 200 Indian-based cars for a spin. It’s fun, says Dr Prakash, “because it’s a totally different experience driving our oldest car, an 1886 Benz, which is more like a horsedrawn carriage, and this Sixties Jag, which makes you feel like James Bond”.

Like a growing number of children of Indian classic-car collectors — who house their vehicles in barns, crumbling palaces and even out in the open — Rupali, 27, has been brought up on the vintage car scene, attending events in America, France and Germany. In November she took the family’s Delage 1930 and their 1900 De Dion-Bouton to the Tour de Paris show. “That was incredible,” she says, showing me photographs of her in the De Dion by the Eiffel Tower. “It was the first time that the Delage had been back in its home country for 86 years, so it was a pretty big moment.”

“It’s not about money. For me, it’s about history, about beauty and about reviving something wonderful that’s fallen into disrepair”

For her father it was a proud moment for another reason. When he bought the Delage it was almost totally rusted and in pieces, and it took him years to refurbish. It wasn’t the most difficult of his cars to rebuild, however. That accolade went to a 1915 Ford Model T, which was delivered in seven plastic bags. “Rebuilding it was a bit like a jigsaw — if a rather expensive one,” Dr Prakash says wryly.

Like most of the collectors I meet at the Indian Concours, which was started nine years ago by the late Indiaphile Mark Shand, Dr Prakash is reluctant to discuss the worth of his cars. “It’s not about money,” he states firmly. “For me, it’s about history, about beauty and about reviving something wonderful that’s fallen into disrepair. You learn so much about previous eras from these cars, and I find that fascinating.”

Indian law forbids the export of classic cars, and before Indian independence in 1947 its maharajas were some of the world’s greatest importers of fine vehicles, so the country has a particularly rich collection. At the event, two vehicles regularly cited as being the world’s most valuable are parked by the front door — a gold-plated Daimler and a canary-yellow 1911 Silver Ghost Throne Car, owned by HEH Princess Esra. It is at her family home, the spectacular Falaknuma Palace in Hyderabad, that this year’s Concours was held.

The palace was once the home of her former husband’s grandfather, the sixth nizam of Hyderabad, who in 1930 was considered to be one of the richest men in the world, ruled half of India and hosted guests from the Russian Tsar Nicholas II and King George V to the first prime minister of India. Now a Taj hotel, Falaknuma is widely considered to be the prettiest palace in the country in which to stay, its colonnaded porticos and Mughal-style domed roofs housing the very finest objects that a nizam’s fortune could buy.

During the Concours weekend, the focus isn’t on the palace, but on the 73 cars and 39 motorbikes on its lawns being judged by motoring enthusiasts and experts from HRH Prince Michael of Kent and the grand prix motorcycle champion Giacomo Agostini to HRH Manvendra Singh of Bharwani and the self-confessed petrolhead Yasmin Le Bon.

Refreshingly, although there are exceptionally wealthy Indian families showing their collections here — including the newspaper magnate Viveck Goenka, who owns 150 cars and whose daughter, Rachel, was given a 1971 Mustang for her 21st birthday — the vehicles that win hearts are those with remarkable personal stories attached.

The “Lazarus” award, for instance, for a car that “has risen from the ashes”, goes to a 1949 Bristol, half of which had been found submerged in a forest, which was then brought back to life by a group of five young, car-mad friends who spent years sourcing parts on the internet and at boot fairs. Best in Show went to a 1914 Wolseley — declared “almost perfect” by Prince Michael — whose owner spent seven days a week over ten months turning a rust-bucket into a gracious sedan, and who dedicated the award, amid cheers from the crowd, to his late father and his tear-streaked mother, who supported him throughout the process.

It’s the multi-generational appreciation of old vehicles that makes the Indian Concours d’Elegance so special, says one of Britain’s leading car specialists, Gordon Murray. “Unlike Europe or America, this isn’t just about wealthy collectors and commercial restorers,” he says. “This show is full of lovely people with a real appreciation of beautiful things and good old-fashioned craftsmen, men who still sew leather, and handbeat chrome parts. You can’t believe what they can do in this country. They’re so inventive. I’ve seen someone make a chrome smelter out of a clay cooking oven. I possibly love hearing stories about how they made the cars more than seeing the cars themselves.”

Although Dr Prakash admits that he’d love to have won an award for his much admired black 1962 E-type Jaguar, just being here has been a privilege, he says. Besides, he’s just been granted approval to create the first national federation of classic car owners, which he aims to start work on the following day, and this year he will start to build the country’s first formal museum of classic cars at his home in Bangalore. “Being a doctor has made me very proud,” he says, “but, honestly, if you asked me what’s brought me the most joy, it’s my family and cars. I’ve got both here today, and new car projects ahead, so I’m one happy man.”

Greaves India (020 7487 9111; greavesindia.com) can arrange a five-night tailormade tour to Hyderabad, with B&B accommodation at the Taj Falaknuma Palace, private guided tours, one palace dinner and a tour of the nizam’s car collection, and return British Airways flights, from £2,690 per person

How to collect classic cars

The classic car market has been on a roll, so much so that the rarest and most coveted models now regularly fetch seven-figure sums. With savings interest rates at an all-time low, many investors are sinking their cash into a classic and reaping rewards from rising values.

With more and more businesses offering secure, temperature-controlled storage facilities, it’s no longer even necessary to devote any space at home to your pride and joy. However, despite the many positive aspects of classic ownership, it is still easy for a novice to make a bad buy. Here, the long-established dealer Peter Bradfield of Bradfield Cars in South Kensington, London, gives his tips to help you buy the best.