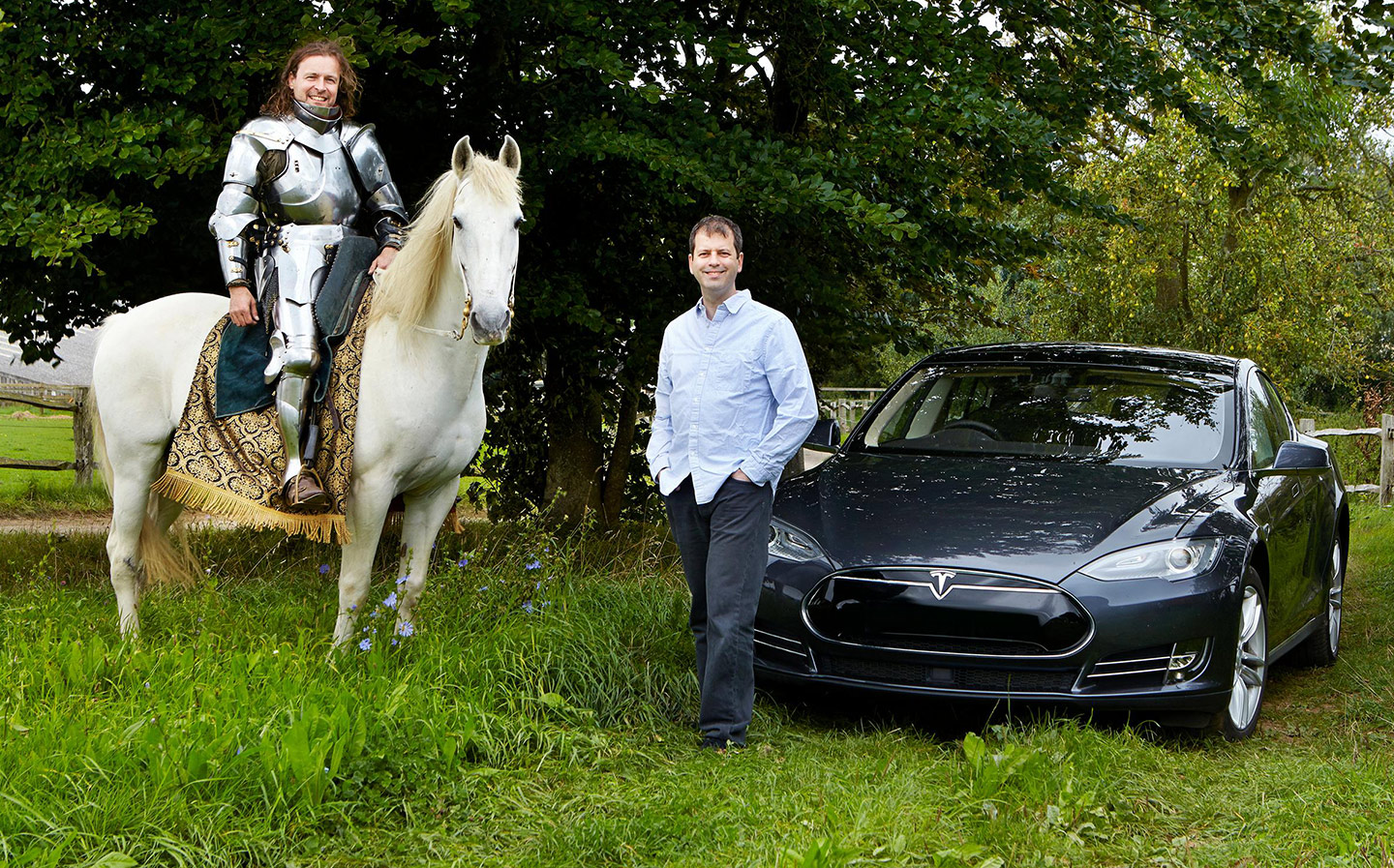 OK, so, forget the £60,000 Tesla, what you’re probably thinking is: why the horse? Not to mention the suit of armour. These contrasting modes of transport belong to Chris and Jason Kingsley, the brothers behind Rebellion, the British computer games company with a string of hit franchises, including Aliens vs Predator and the Sniper Elite series.

Chris, the company’s chief technology officer, drives the Tesla Model S, the sort of vehicle you might expect to find parked in the garage of any self-respecting technology entrepreneur. Jason, as well as being Rebellion’s chief executive, is also a practising knight (as much as that’s possible in 21st-century Oxfordshire), who spends his free time tending to his stable of 13 horses and working on his jousting. He drives a Mitsubishi Outlander hybrid, but his passion is reserved for single horse power.

Having both graduated from Oxford (Chris in chemistry, Jason in zoology), the Kingsleys followed their love of gaming to set up Rebellion, based in Oxford, in 1992. Their company now employs about 200 staff and has a turnover of about £40m. In 2000 they took over the cult comic 2000 AD (featuring the character Judge Dredd) and have since expanded their publishing arm, launching Abaddon Books in 2006.

For many years, the brothers had fairly typical ways of getting around. Jason, the elder by a couple of years, passed his driving test aged 17 and was given his gran’s Austin 1100, whichhe drove until the engine fell out: “I remember thinking, ‘What was that noise?’ and looking in the rear-view mirror, seeing a load of nuts and bolts. There was an enormous crash and the car went over everything and landed with the back wheels on the engine.”

Chris’s first car was his mother’s cast-off, yellow Mini Metro, which he similarly drove “until the engine was coming off its support”. As they both embarked on (and then abandoned) PhDs and began setting up their company, the Kingsleys had a series of Mazda MX-5s, some shared: “Great fun in the winter with the top down, dressed in 27 layers,” recalls Chris.

It was only in 2005, after Chris took his brother to an English Heritage event, where he saw historical re-enactors wearing armour and riding horses, that Jason began to explore the world of medieval horsemanship.

Having played polo, Jason, 53, was an experienced rider, and quickly became fascinated by the ways knights might have lived and worked with their horses. “I’m with the horses two hours in the morning before work and two hours in the evening after work and then both days at the weekend,” he says.

“It’s a whole different window into a way of being a man which has died out. When you put on that armour, you are experiencing the same physical constraints as a person from way back then — you’re time-travelling, in a way.”

Jason’s girlfriend is half-Japanese, comes from a long line of samurai, and is, he says, quite relaxed about the horses and weaponry. They live on a farm where, as well as his plug-in hybrid 4×4, Jason owns a tractor and a 2.5-ton digger. He can also drive a Celtic chariot (a type of two-horse chariot).

Chris, 51, lives a more conventional life in the Oxfordshire countryside, with his wife and children, aged four and two. He bought his Tesla in 2015, relieved he could go electric “without having to do sackcloth and ashes”. “The other thing I really like about the Tesla is you get the software updates. It’s a bit like a computer on wheels.”

Chris Kingsley: My life in cars

Jason Kinsley: My life in cars